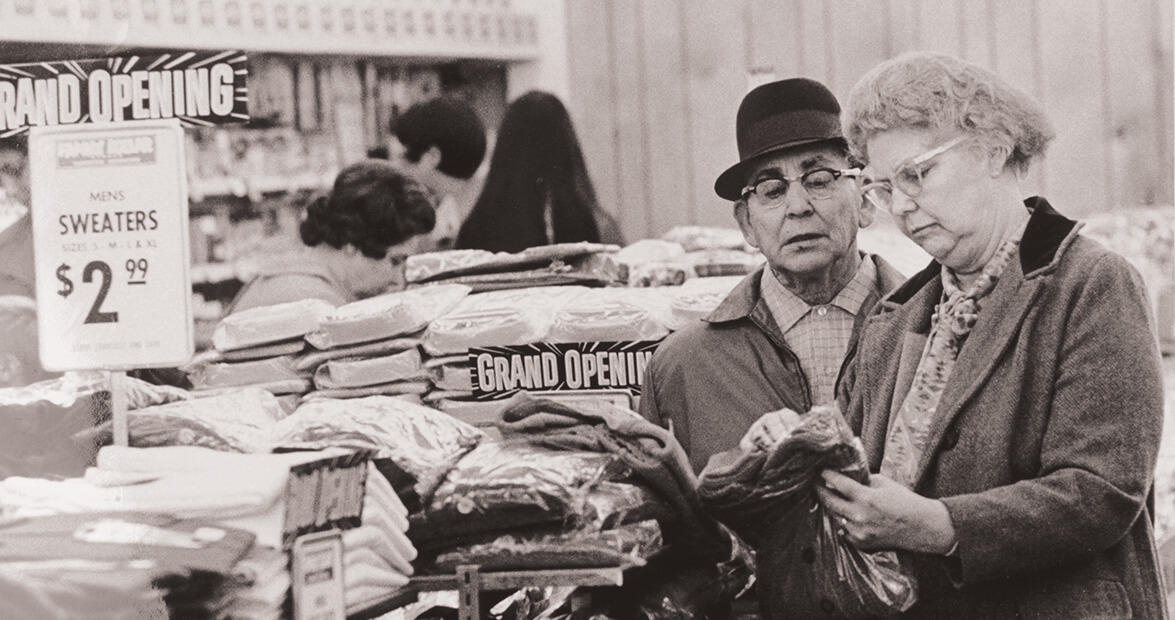 I pulled into a space in a pockmarked parking lot and there it was, just like he said it would be. Waiting right in front of the Family Dollar store was a big, dark stain, the kind that a parking lot gets only if a lot of cars have parked there, and a lot of those cars have been leaking oil.

The “he,” in this instance, was Leon Levine, and he’s got a dog in the oil-leaking fight. He founded Family Dollar, and in the early days, he scouted out locations for new stores. If he was looking hard at a shopping center, one of the things he’d look for was oil stains. Stains meant leaky cars. Leaky cars need oil.

But it’s more than that. Family Dollar’s core customer, the person the executives think is most likely to be walking through the door to buy stuff, is a woman in her mid-40s who makes less than $40,000 a year and is the head of household, meaning she has relatives or kids in the house, but no husband. Is that the type of person who’s most likely to be driving a car that’s leaking oil? Leon thinks so. And he’s been right all along.

Most people have regrets. Most people, with the benefit of age, look back at the things they could have done differently when they were young. “I really didn’t have any failures,” he says. “So I can’t really say I’ve learned from that.”

Leon hasn’t changed much over the years. People who know him call him sharp, even at age 76. They call him shrewd. They call him a businessman. Some call him Mr. L. He still has the same haircut he’s had for decades, although the dark brown has changed to silver.

Today, Family Dollar has grown from one store in Charlotte to 7,800 stores in 45 states. It is the anti-Walmart, low-priced but small and nimble. Whereas Walmart comes into town with the gentle touch of a lumbering bear, Family Dollar sneaks into your backyard like a cat. Somehow, it feels like it’s always been there.

And it was all started by a young man who had a thing for menswear and shoes.

Leon was born in Rockingham in 1937. His father, Harry, ran The Hub, a five-and-dime department store next to R.W. Goodman down on South Lee Street. They sold clothing and shoes. It wasn’t flashy. But the place was clean, and the shirts were straight and neat.

When Leon was 12, his father died, leaving his mother to run the store.

At 14, Leon started working weekends, watching his older brother, Sherman, sell suits. He’d start off by grabbing a few shirts, draping them over his arm, and asking, “Which two of these do you like?” Then he’d do the same with neckties. Leon thought Sherman brought the merchandise to life. He made it sexy.

When Leon was 16, Sherman went off to fight in Korea, and their mother needed a break to help her beat her high blood pressure. She’d go home to have lunch and rest for a few hours at a time, leaving Leon in charge of the store and its 18 employees. Before long, Leon began talking to the salesmen who came into the store. He learned how to buy.

At 17, Leon became obsessed with a place called Filene’s in New York, which sold off its lowest-priced stuff in the basement. If they can do that there, Leon thought, I can do that in Rockingham. He convinced his mom to let him open his own bargain basement, stocked with the stuff that people wouldn’t buy. He drastically lowered the price. He learned how to sell.

At 18, he learned how to make. He and Sherman bought a stake in the Union Craft Company in Wingate, which made chenille bedspreads. Leon was put in charge. He didn’t know a thing about factories. So he went to Wingate College in the mornings to learn about the business, then went off to run the plant in the afternoon. He learned that factories have slow periods, when they’ll sell their product at a much lower price.

At 20, Leon married Barbara, a Chicagoan. They lived in an apartment in Charlotte with their newborn son, Howard.

At 22, Leon put it all together: the shirts on Sherman’s arm, the bedspreads rolling out of the factory in Wingate, the talks with salesmen who came into The Hub. He had $6,000. He poured it into a little store on Central Avenue between Pecan and Thomas Avenues in Charlotte’s Plaza-Midwood, a post-World War II neighborhood full of bungalows and trees. He went through about 400 possible names for the thing before settling on Family Dollar; the first part was for the customers he wanted, and the second was for the price he aimed to hit. Not everything was a dollar. Some things were $2. Some things you could pay for with a couple of dimes or quarters. The prices were low, but the merchandise wasn’t cheap. Leon doesn’t like that word.

He built displays from ping-pong-table-size slabs of Sheetrock. He got a list of all the factories in North Carolina that sold what he wanted. He figured out who to talk to. Then he figured out how to react. Someone would call him and say they had six dozen shirts to sell. The shirts would normally go for $4, but they’d sell to Leon for $1.50 if he could buy them that day. And so Leon would drive out to the factory and make the deal, sometimes bringing back what he could in his station wagon.

One Family Dollar became four in Charlotte. After his 15th store opened, Leon stopped trying to visit a store every other day and hired someone to do it. After the 50th store opened, he hired buyers and people to start scouting real estate, looking for those oil spots.

He didn’t always make friends. In 1962, Leon opened his first Family Dollar in Myrtle Beach, South Carolina, which hadn’t seen a discount store before. Some of the beach stores sold towels for $3 or $4, and bathing suits for $5 or $6. Leon sold towels for $2 and the swimwear for $3. He found out he could buy up radio spots for $1 apiece on Myrtle Beach’s only radio station. He bought 50 a day. The other stores in town got together. They went to the radio station manager and told him if he didn’t stop the Family Dollar ads, they’d pull all of their commercials. The Family Dollar manager in town was the brother of the radio station’s manager.

At some points in Family Dollar’s history, the chain was opening 400 to 500 locations in a single year. They did it all without taking on any major debt. Instead, they’d wait until they’d built up some cash, then use it to expand. What started as a $6,000 investment turned into millions of dollars and thousands of stores.

Some stores exist on some sort of nostalgia or atmosphere. Boutiques do this. Stores at the mall do this. Some places have a certain smell. The clothes are laid out in an ornate manner, or their walls are covered with posters or paint. The music is turned up loud. In those places, you’re not just paying for the stuff you bought. You’re paying for the experience.

At one point, each was designed to be nearly identical. Identical meant familiar. In the 1980s, Family Dollar stores were laid out with women’s wear in the front. On the right. In every store. Most people, when they walk into stores, turn right. Most of Family Dollar’s shoppers, you’ll remember, are women.

I decided to test it out. I walked into a store. Turned right. Women’s wear.

It was that way when I walked into a store next to a nail salon at a strip mall off South Boulevard in Charlotte. It was that way when I strolled into a store in an aging shopping center in Gallipolis, Ohio, just a stone’s throw away from the Ohio River. Both had red plastic utility baskets for $1.50. Citronella candles for $2. Black, fuzzy dice for $3. Both had oil spots in the parking lot out front.

There is very little in a Family Dollar store that is left to chance. At most stores, the groceries were in the front, but they were selling so well that, back in April, the executives decided that they should move the food toward the back of the store so you’d have to walk past the clothes to get to them. A lot of its customers smoke, so in March 2012, Family Dollar started selling cigarettes. In the 1990s, Family Dollar renovated its stores. They gave up selling the motor oil that so many of its customers were slowly losing from their car in favor of more toys and electronics, which were selling better and gave them better margins, meaning more profit. They put the toys in the back of the store. Clean. Familiar. Comfortable.

And, of course, the prices were low. They’ve always been low.

It is hard to romanticize a store built on research. Sure, a lot of hard work went into it, but now that sweat equity has been supplanted by statistics and sums — cold numbers — the ones that tell you whether something will be a success and how far above or below eye level the toothpaste should be. In the early ’60s, there were around 20 discount chains out there, and Family Dollar outlasted nearly all of them. Sometimes the most ingenious plan isn’t flashy or loud or brash or emotional. Sometimes the most ingenious plan just plain works.

Howard Levine, the son, is the man in charge of the company now, and that’s left Leon to do something with the money he’s spent a lifetime accumulating. He’s giving it away. The Leon Levine Foundation, which he founded in 1980, has given away more than $75 million. He’s funded a cancer center and children’s hospital in Charlotte, a science center at Duke University, Jewish community centers, and most recently, the Discovery Place Kids museum in Rockingham, his hometown.

Leon asks if I’ve seen it. As a matter of fact, I have, I tell him. I was just out there that week. It’s amazing what a little money and effort will do, I said. His effort included a $2 million grant to get the museum open, and today it’s split up into different themes, all under the heading of “I can.” I Can Imagine. I Can Grow. I Can Be Anything.

In February, Leon Levine came back to Rockingham for the opening, and the mayor asked him if he’d like to drop by and see the house where he’d grown up. He hadn’t been there in 49 years.

The woman who owned it found out Leon was coming. “Daggum if she didn’t have hors d’oeuvres in there for us,” he says.

Leon walked through. Looking. Remembering. The carpet was gone, replaced by the hardwood underneath. But everything else, from the upstairs to the basement, was the same. Familiar. Comfortable. Just like he remembered it.