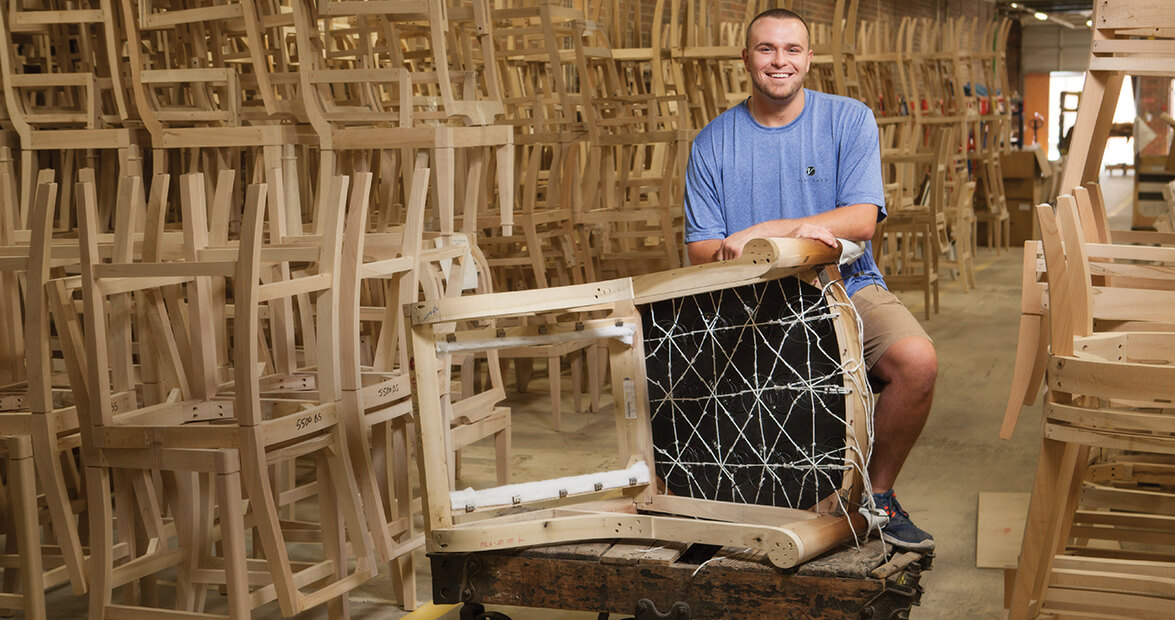 This story starts with one tree — a hickory situated just so in North Carolina’s Catawba Valley more than 150 years ago. Under its boughs, a man named Henry Robinson found a cool respite from the summer heat and decided the shady spot would make a nice place for a watering hole. He built a pub made from logs under that tree, named it Hickory Tavern, and unknowingly planted the seeds for the town that would become Hickory, North Carolina.

Hickory is in Catawba County, which, with 120 furniture factories, is home to the second-largest such industry in the country. Here in Hickory, workers bend and nail wood, crafting chairs, sofas, chaise lounges, and sectionals, in a town that is named for a bar that was named for a tree.

Today, trucks full of wood rumble up to Vanguard Furniture’s machine shop. The lumber gets cut into pieces in Vanguard’s frame shop, where craftsmen like Shawn Price fit the parts together like giant Legos.

Shawn’s father worked in furniture building for 40 years, in machine rooms and framing plants. “Daddy had us learn how to build stuff before high school,” says Shawn, whose brother Donnie also works here. “We used to only build with sticks, but now we use plywood. We put it together like a puzzle; every puzzle is a new challenge.”

“We put it together like a puzzle; every puzzle is a new challenge.”

Carved from nature, Hickory has always thrived because of nature. In the early days of the furniture industry, Hickory benefited from its location as an outpost on riverways and railways, surrounded by local craftsmen and lush woods. In the late 1800s, a young George W. Hall, who would go on to manage Hickory’s first furniture factory, watched freight trains thunder through town, carrying lumber cut from North Carolina’s forests to industrial furniture manufacturers up north. He recognized the town’s potential to take that lumber for itself, to build furniture right there in Hickory.

When the Great Depression hit the United States in the 1920s and ’30s, furniture dropped from people’s lists of important purchases. Many furniture companies folded, but those that held on long enough welcomed veterans returning from World War II, who were looking for work and building homes that needed new furniture. These remaining companies grew and divided and grew some more, and before long Catawba Valley became the furniture capital of the world. 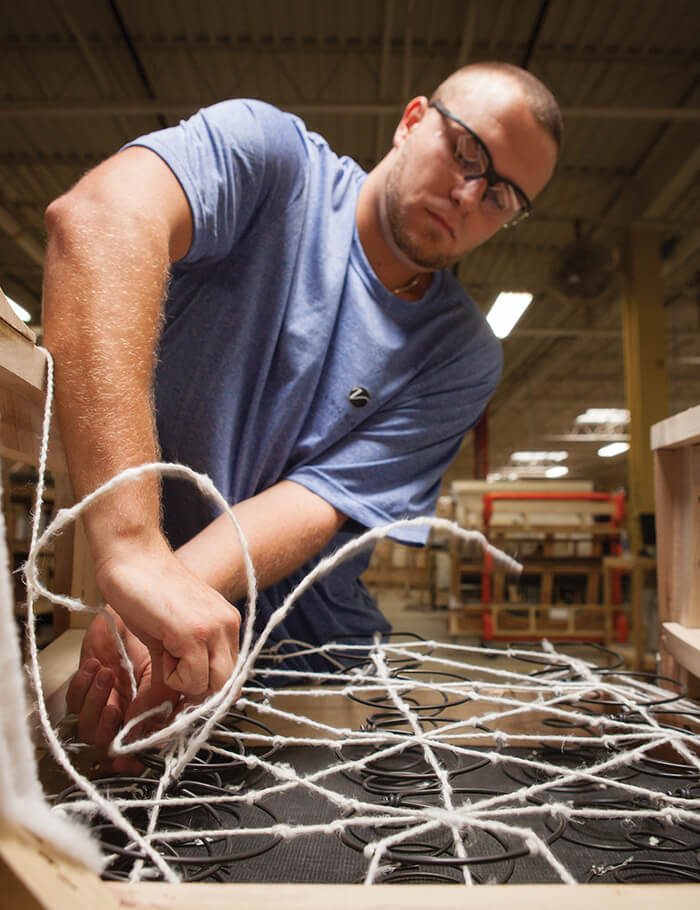 Adam Byrd proved a natural at weaving springs, a skill that usually takes three or four years to master. photograph by Jon Eckard

The furniture business still relies on natural skill to distinguish itself from mass-produced products. At Vanguard, each piece of furniture is custom-built. This means each employee, or “framer,” must know furniture intuitively, how to build a bed one hour or a sofa the next. For Vanguard’s framers, furniture comes as second nature.

“Until recently, furniture making was a family tradition,” says Hickory Furniture Mart owner G. Leroy Lail, who’s been in the furniture business for half a century. Today, with much of the world’s cabinetry work and quick-made pieces shipped in from large factories overseas, Hickory furniture makers rely on skills handed down from generation to generation.

Randy Byrd lays springs on the bottom of a chair assembled by one of the Price brothers. He runs a piece of string across one row of springs, down to the next, then diagonally, and back. He works like a spider, weaving a web that keeps the springs in place and level, which helps them to move with the body of the chair’s future owner.

Randy has woven springs into furniture for 40 years. “The older people taught me when I was younger,” he says, “and my son asked me to teach him.”

His son, Adam, lays springs across the bottom of a chaise lounge. At well over six feet tall, Adam towers over the lounge, reaching and threading from spring to spring. It takes three to four years to master this craft, but Adam’s height and talent have set him apart; he aced the work in his third year. “For pieces like these, you have to be real tall like me to reach across,” Adam says.

Yashica Long started sewing fabrics for furniture manufacturers out of high school. “My mama sewed the sofa in our house and pushed me into a training program to learn,” she says. At the time, she had a little boy and wanted a skilled job. At Vanguard, she quickly moved from sewing to cutting, one of the most complicated skills in the industry. 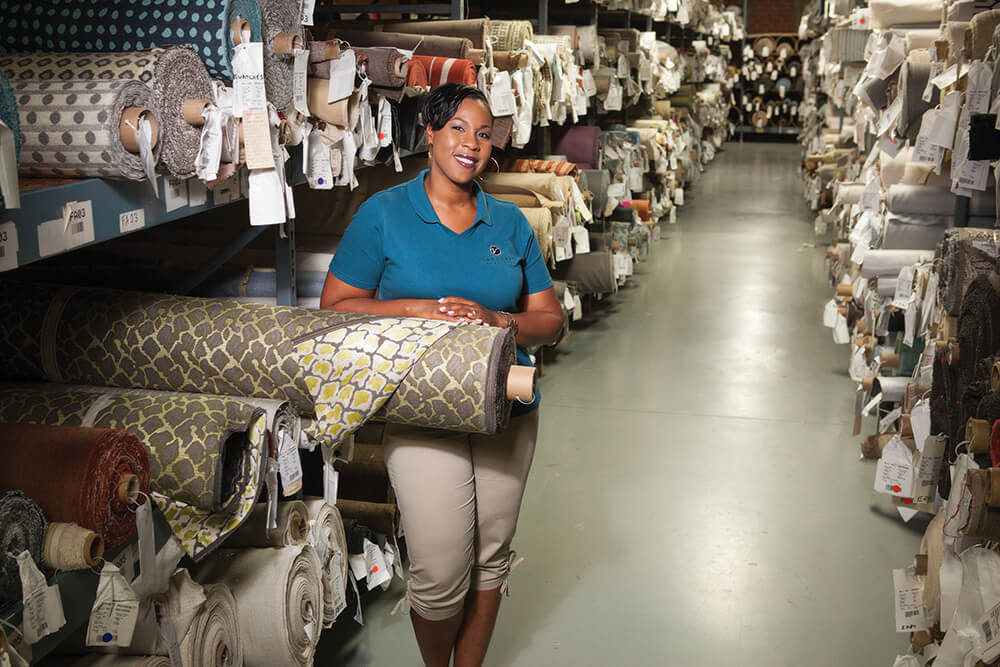 Yashica Long is a fabric cutter, which requires her to have the eye of an artist and the precision of an engineer. photograph by Jon Eckard

While the framers and springers work at building the bones of a piece, Yashica and her colleagues specialize in covering it. As the cutting manager, Yashica works in Vanguard’s main building, just down the road from the machine shop. To get to her office, you must first walk between rows of thousands of fabric rolls stacked two stories high and stretching a city block. Wrapped around long cardboard tubes, buttery yellow leather hangs from one unraveled roll. Fuzzy cotton tatters tuft out like duck down from roll tops, and vibrant hues peek around cardboard curls. Each fabric is weighed, measured, and cut just so to fit the slopes, nooks, and cushions.

“There’s an art to cutting, but you also have to be an engineer,” says Vanguard CEO John Bray. “Cutters need to look at the fabric’s pattern, see the florals and stripes, and envision how to cut them so they will align perfectly on the furniture.”

Yashica shares her knowledge and skill by teaching an introductory sewing class at Catawba Community College’s Furniture Academy. While she and others still cut smaller pieces by hand, they use computer technology to project an image onto fabric and cut it precisely.

At Vanguard, each piece is bundled on a cart for assemblers and upholsterers to connect and fit. When it’s finished, the piece looks nothing like the raw materials of wood bits and fabric rolls. The sofa, bed, or chaise lounge carries nothing of the thwacks and rumbles of the factory floor; the fingerprints of the dozen or so people who carefully built it are wiped away in the finishing process. A finished chair hides the fibers of the felled trees keeping it sturdy. It holds the loops and threads of skills passed down through generations.

Hickory trees can live for more than 350 years, but it’s likely the old hickory tree that shaded the tavern is long gone. Still, the town born of a tavern born of a tree remains and thrives. Its furniture makers carry on the entrepreneurial spirit of George W. Hall, and the resilience of the makers in an industry that has continually remade itself over the past century.

Like Hickory — the town and the tree — the furniture is beautiful and one of a kind.