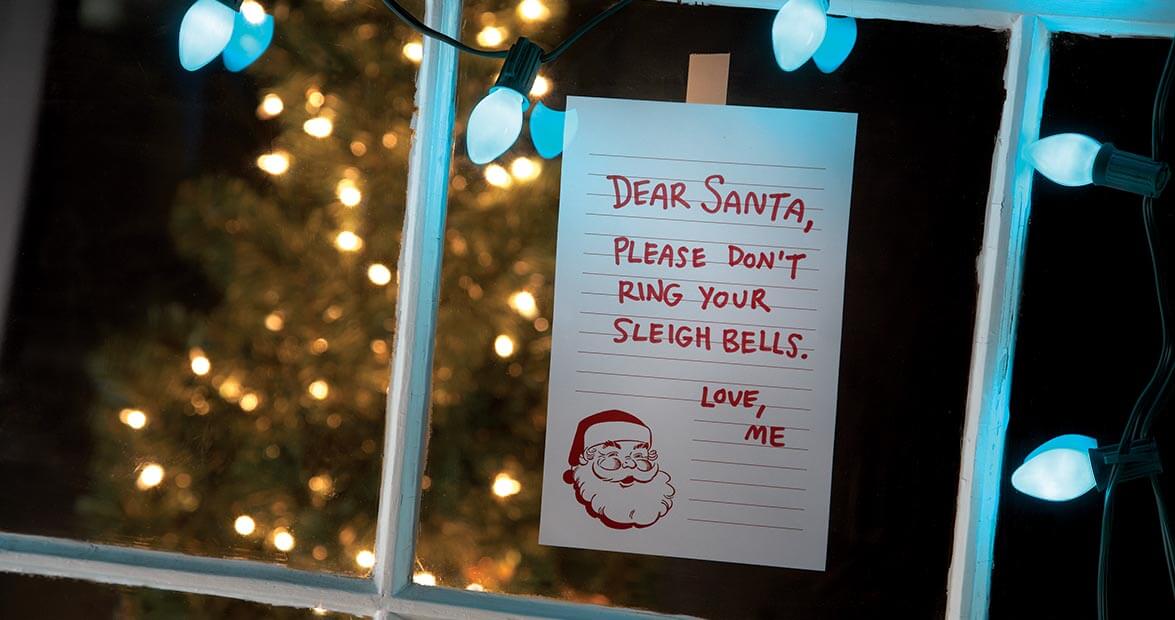 The Christmas my older son, The Toad, was 3½ years old, we went all in on Santa. Over the course of that year, the child had become a person who could carry on something resembling a conversation, so the time seemed right. Big dude in a red suit, we told him. Flying reindeer. Serious operation based out of the North Pole.

We sent a letter to this “Santa.” We went to see him at the mall. We explained all about how Santa would rooftop himself at some point between bedtime on Christmas Eve and whenever we woke up on Christmas morning. We made fairly assiduous efforts to be nice, rather than naughty. All December long, we read The Night Before Christmas.

On the actual night before Christmas, I took The Toad out to the front porch to listen for sleigh bells. Then we went upstairs for a long winter’s nap. Important, I guess, to note that The Toad was and is a child who wishes very much to know precisely what is coming next. Who fears, sometimes acutely, things like thunderstorms and substitute teachers and surprise in general and — I got all the way to his bedroom door before I realized he’d started crying. “Sweetheart,” I asked him, “what’s wrong?”

He did not want to hear sleigh bells in the night. This he told me between sobs. Here’s what I’d done: I’d spent a month telling my kid, the kid who reacts to change the way most folks react to electric shock, that a magic, fur-clad stranger was going to land on his roof in a hail of jingling bells and reindeer hooves, enter his house through the chimney, eat his cookies and drink his milk, drop a few things off, and then skulk back out again. I climbed in his bed. I held him. I told him I was sorry. Fortunately, he did not ask me what I was sorry for.

“Daddy,” he said, once he got calm. “Here’s what I want you to do. Write a note that says, ‘Dear Santa, Please don’t ring your sleigh bells. Love, Me.’” Then he told me he wanted me to put the note “backwards” in the window, by which he meant: letters facing out. That, I told him, we could do. And I did. I made the sign and hung it up and kissed him goodnight, and he asked me for one more favor: “Stand outside and wait for Santa,” he said. “Tell him to make sure to look in my window. Tell him to read the note.” I said I would. And before I could tell him I loved him, The Toad said, “I love you, too.”

A history of Scots in North Carolina that wends its way Toadward would trace certain members of Clan Mackay — a clan (like all clans, surely) known for heroism and bravery — down out of the Highlands of Scotland and across the ocean and into the Upper Cape Fear River Basin. Let’s call that 1750ish. At some point, Mackay becomes McKay. At some later point, my grandfather Walter McKay marries my grandmother Jane. At some point later still, they decide to hang blue lights — and blue lights only — on the house at Christmas, to celebrate their Scottish heritage.

It was in the glow of those lights — the actual lights from my grandmother’s front porch, large-bulbed lights I drove hours to claim when we sold her house, lights I now hang each Christmas on my own house — that I waited for St. Nick. Maybe I snuck back inside to find a cup of wassail. Maybe I listened in on the monitor to see if all was well upstairs. But The Toad, fierce descendant of Clan Mackay, would certainly ask me the next morning, and I did not want to lie. Yes, I needed to be able to say. Yes, I sat out there in the blue, just like you asked.

I’ll stand outside on Christmas Eve, even if just for a few minutes, for the rest of my life. It’s not so hard to know when a tradition is born. I’ll stand out there in the blue lights — I will baby those lights back to life each year, no matter what it takes — and I’ll wait.

I’ll wait because he asked me if I would. I’ll wait years after he no longer needs such a thing. I’ll wait because I’m a person who all but clings to the quieter moments of holidays: I’m a big fan of the day before. I like the getting ready. The holding still. The waiting, under your grandmother’s blue lights, for something impossible.

I’ll stand out there in a Carolina evening that’s just cold enough, maybe, to offer the possibility of snow. I’ll look to the east, toward the lands of The Toad’s transplanted Scottish ancestry. I’ll watch the sky for Santa. “Read the note,” I’ll be ready to say. “We left you a note. If you wouldn’t mind, please land quietly.”