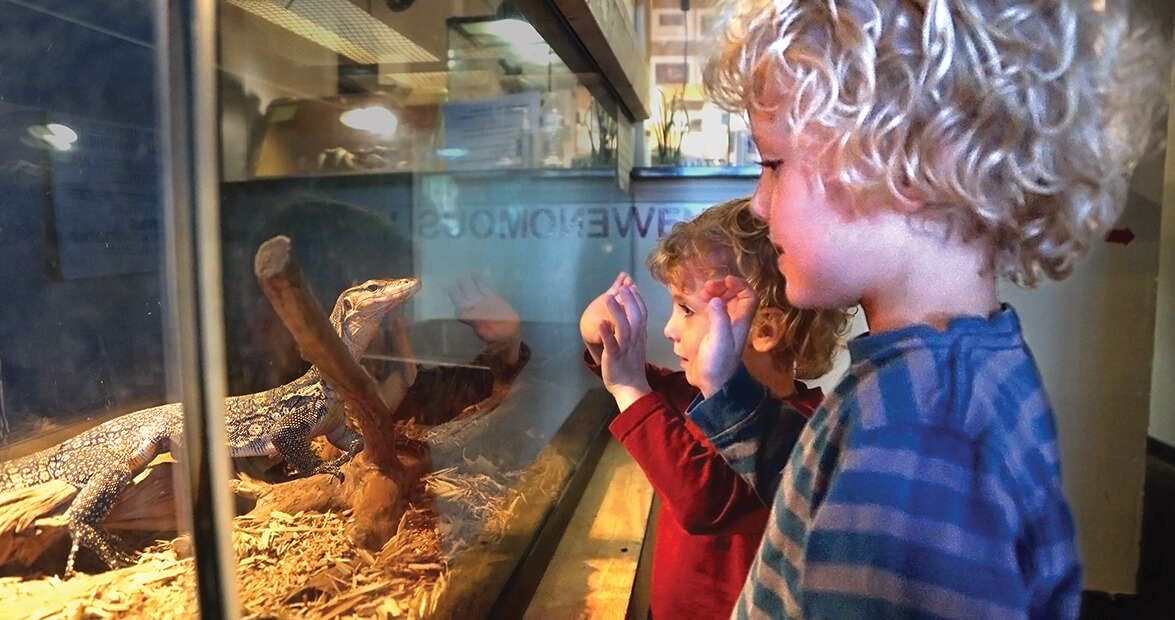 How does a “Walkertown farm boy, born and raised” become a self-taught “heavy herpetologist” (think: large-animal vet) in charge of what he says is the largest reptile rescue and full medical facility in the country? This is one of the questions I’m asking Chad Griffin while his boys, ages 13 and 8, show my boys, ages 6 and 3, a Gila monster — a lizard that ranks among the most venomous in the U.S. Griffin’s boys insist there’s nothing to worry about: A Gila monster has no fangs, and thus has to chew its venom into a victim. Oh, I think. Well, then. Griffin’s older son kisses the Gila as you would a puppy. It’s been a strange morning in my world.

Though they’re all strange mornings, aren’t they? We’re here — at the CCSB Reptile Rescue Center in Kernersville — in large part because The Toad, my older son, has an imaginary pet copperhead named Hissy. His brother, The Wee, not to be outdone, invented a lizard: Rissy. Last summer we had to take Hissy to the beach in an empty box; last month we had a couple of nervous hours in a hotel while Rissy was — wait for it — lost. This is to say that if one were to suggest to my kids a day trip to go and see and even hold real snakes and lizards, one might receive a fairly enthusiastic response.

The rescue center is tucked into a strip mall next to an ice cream shop, and from the front, it looks like any other store. Inside, though, it’s a kid’s dream: cages and tanks stacked floor to ceiling in a labyrinth of heat lamps and water bowls and bugs and leafy greens and — Is that an iguana? Daddy, is that a real snake? A memory of being their age tumbles back to me, my mother taking me to a pet store to see a tarantula, this in the service of a science project on spiders. I remember petting that tarantula. My boys, on cue, find a Goliath birdeater tarantula, housed between some geckos and baby pond turtles.

We do not pet the tarantula.

Watching turtles get hit on the road always made him mad, Griffin says — that’s the why part of how he came to be here. And by here, I don’t just mean this shopping-center outpost of a private refuge housing some 500 animals. I mean becoming the person who educates, as Griffin tells me, law enforcement and federal agents on how to seize and handle animals, veterinary staff on how to treat animals, and doctors and paramedics “about how to deal with venomation.” I’ve never heard that word before, but need not ask what it means.

“Dogs have help,” Griffin says. “Eagles have help. Reptiles are the outcast pets of society. They need help.” Poster reptile for that help: Fritz, a 40-year-old African spur thigh tortoise that Griffin took in after a local house fire, going so far as to invent a hoist to help Fritz recover from the burns on his feet. The Wee leans into the tortoise enclosure, rubs Fritz enthusiastically on the head. Fritz is the size of a dorm fridge. Fritz allows this.

The Toad’s favorite reptile of the day is an Eastern diamondback rattlesnake. The Wee is partial to a thoughtful-looking Asian water monitor. We end our visit with each kid holding a ball python, so named because what you get with a docile, uncertain ball python is a ball of snake, head in the interior center. “Oh, he’s waking up!” The Wee shrieks, handing me the uncoiling snake, which I bravely shuttle back to Griffin.

Over ice cream next door, the kids are deep in conversation. “I think that snake was Hissy,” The Toad says.

“Hissy is not a python,” The Wee says. “And Rissy is asleep in my bed.”

“Right,” The Toad says. “And Hissy is asleep in my bed.” Suddenly, he’s wide-eyed: “Daddy! Did you feed Hissy this morning?”

“I did,” I tell him. “Though that really ought to be your responsibility.”

“And Rissy,” I say, and for the moment, anyway, all is right in the world: All our reptiles are once again safe, and all accounted for.