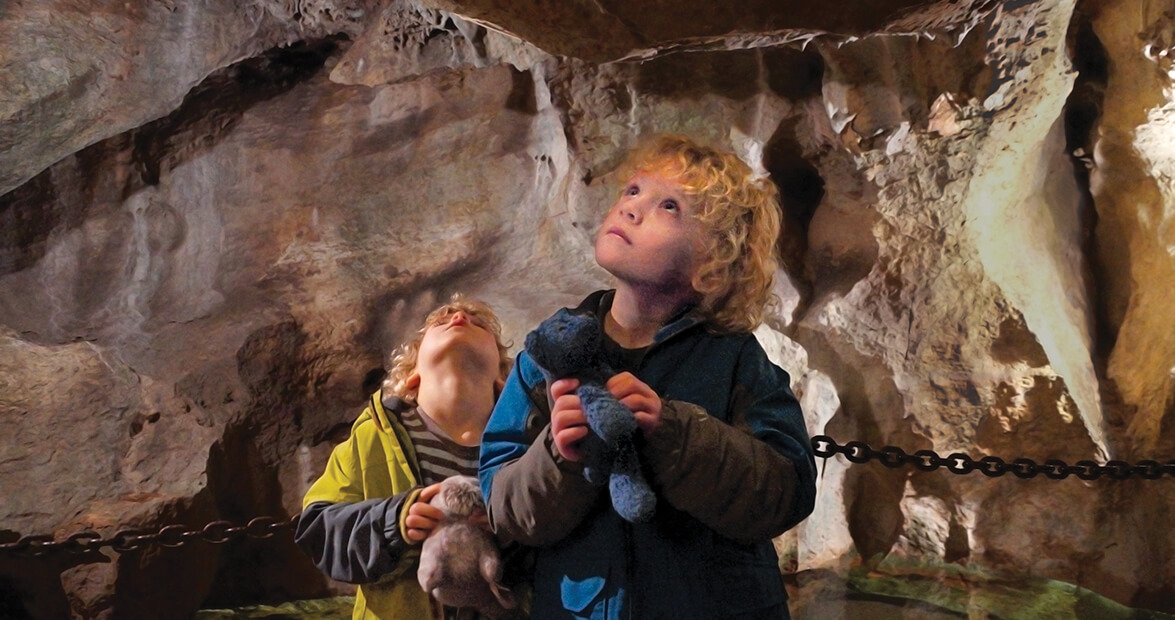 My brave first-grader, The Toad, decides to bring his blue stuffed bear inside the cave.

“Azulito might meet some of her friends in here,” he says. But I know this kid, know the real score: He’s nervous. Not quite afraid, but nervous. When our Linville Caverns tour guide asks us to guess how deep we are inside the mountain, The Toad squeezes up against my leg. “A half-mile,” she tells us. There’s a half-mile of rock above us. The Toad holds Azulito close. I hold The Toad close.

My 4-year-old, The Wee, has brought a small stuffed walrus. The walrus is unlikely to be of much help, which is fine. The Wee is fearless. This child is made of stone. Deeper into the cave we go.

Linville Caverns, just north of Marion, has been around for 16 zillion years, give or take, and in operation as a place of general wonder since 1937. Our tour guide, Kayla, tells a tragic story of an interloping otter wiping out the cave’s trout population, a tragic story of Civil War deserters huddling deep underground, a story that’s bound to turn tragic of two boys heading well inside the caverns with only a single lantern between them. The Toad turns to me, excited: “That’s us!” he says, meaning himself and his brother. “Hang on,” I say, reaching for his hand. Sure enough: The boys, way back in 1915, drop their lantern. “Have you ever seen total darkness?” Kayla asks our group. The Toad makes a not-so-brave noise. The Wee is unperturbed. Kayla has the group put our phones in our pockets, and cuts the lights off. The darkness is chewy and thick. It’s as if we’ve been wiped away. The boys whisper to each other, check to make sure the other is still there.

Kayla tells us that if you lived in total darkness, you’d go blind in six months — but it wouldn’t matter, because you’d go crazy first. She flicks the lights back on. “Now let’s go see the bottomless pool,” she says. The Toad, eyes very wide now, trades out my hand for his mom’s.

The lantern boys, the story goes, groped backward against the current of the creek, and emerged days later with severe hypothermia, but alive. We shuffle past the living coral, the stalactites and stalagmites, squeeze through ever-narrower passages. Kayla points out formations with her flashlight: a cathedral room above us with a floor only a few inches thick; semiprecious stones within the rock walls that glow, almost as if by magic, when she holds her light to them.

We emerge half an hour or so later, blinking in the brightness of the day. The Wee sprints for the gift shop. The Toad, gone uncharacteristically quiet, seems focused on the fact that he, too, is alive.

Later that night, The Toad arrives downstairs in his pajamas looking small, like the little kid he only barely remains. He’s got Azulito with him. He swallows a half-smile. “She’s afraid,” he says. “She needs a special cave snuggle.”

It’s dark up there save for a strand of Christmas lights he never gave up after the holidays, and now uses as a nightlight. I climb into his bed and he mashes himself into my side. The smell of this child’s hair: dog paws and sunshine. “What did Azulito think the scariest part of the cave was?” I ask. “Total darkness,” he whispers. “And the bottomless pool.” And what did she think the best part was? “Total darkness,” he says again. “And the bottomless pool.”

“Funny how that goes,” I say. “How the most frightening parts are often also the greatest.” “How do you mean?” he doesn’t quite ask, already falling asleep, and what I don’t quite tell him is this: like your hand grenade of a brother snoring away down the hall, like your mom downstairs waiting to sit up awhile with me, like getting to be here next to you and pretend that I’ll never let you drop your lantern, that you’ll always get out. I’m terrified of all of you, I think. But this is surely, surely the best part.