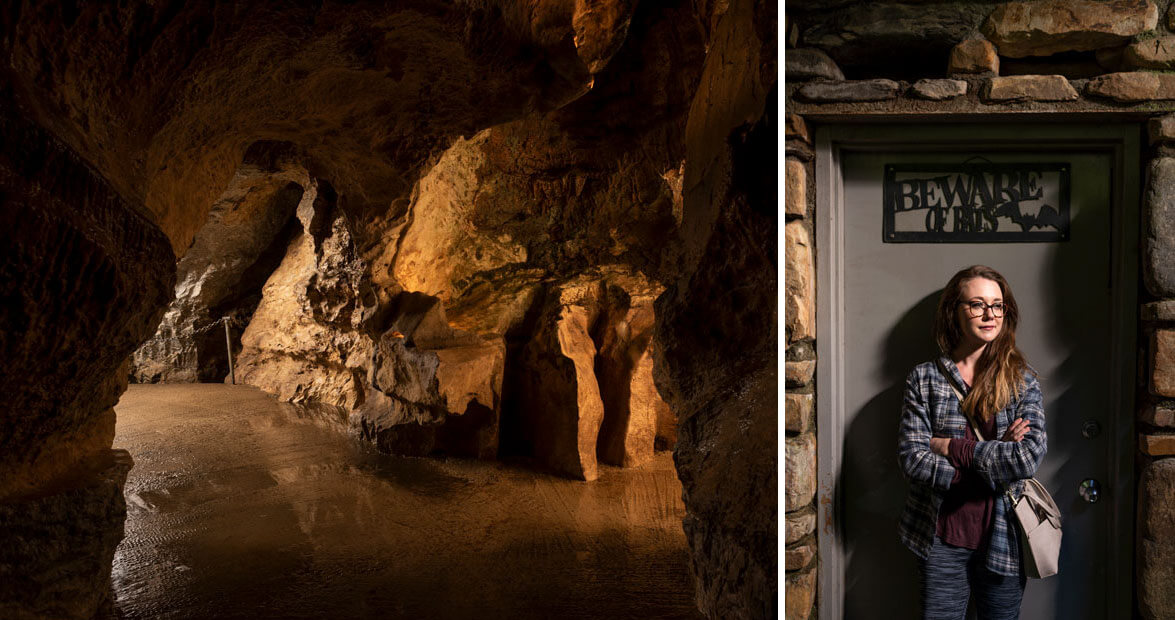 A curtain of cool air envelops me as I step inside the cave. Ice-cold water slides underneath the straps of my sandals and plops on top of my head while my eyes adjust to the dim lighting. Whoa. Everywhere I turn in Linville Caverns, there are waves of stone, speckled with burnt oranges, soft greens, and deep grays, cascading from the ceiling to the floor. A small stream babbles. Pictures on Google don’t do the caves justice: Standing inside is a visceral experience.

Six other people stand beside me, sharing my moment of awe, while Steven Mistichelli, our tour guide, flicks his flashlight toward the ceiling. “I call this getting kissed by the mountains,” he says as water drips onto his face. He tells us that these limestone caverns in northern McDowell County are 2,400 feet under Humpback Mountain, where the environment is consistently a cool 52 degrees. The  temperature certainly contributes to the otherworldly feel down here.

Before weaving in and out of the tunnels, Mistichelli warns us to keep an eye out for low-hanging rocks — what he calls “concussion rocks.” As I follow behind my tour group, taking care to protect my head, I can’t help but think the caverns are a bit magical, like something out of a storybook. But Mistichelli explains that the reason for the caves’ existence is a pretty straightforward chemical reaction: When water from the ground seeps into the dolomite rock that makes up the caverns, carbonic acid is formed. The acid in the water breaks down the minerals in the rock and essentially reconstructs it, depositing rock in new places. This process is what gives the rock a melted look, like it’s dripping ever so slowly. And “slow” is the key word: It takes 125 years for a cubic inch of rock to grow.

Two types of rock formations make up the majority of these caverns: stalactites, or rocks that point down toward the floor, and stalagmites, or rocks that point up toward the ceiling. Mistichelli traces black streaks on the rock with his flashlight, a reminder not to touch anything — the oils from human skin stop the chemical reaction, causing these streaks to appear on the rocks. Green streaks indicate algae. All of the other colors represent minerals: orange for iron, blue for cobalt, gray for manganese, white for calcium.

It’s a reminder that Even though these caverns have been around for hundreds of years, they aren’t fossils. Instead, they’re part of a living ecosystem. Centipedes, millipedes, spiders, salamanders, cave crickets, crawdads, trout, and bats all call these damp caves home. In fact, it was fish that led to the discovery of the caves. 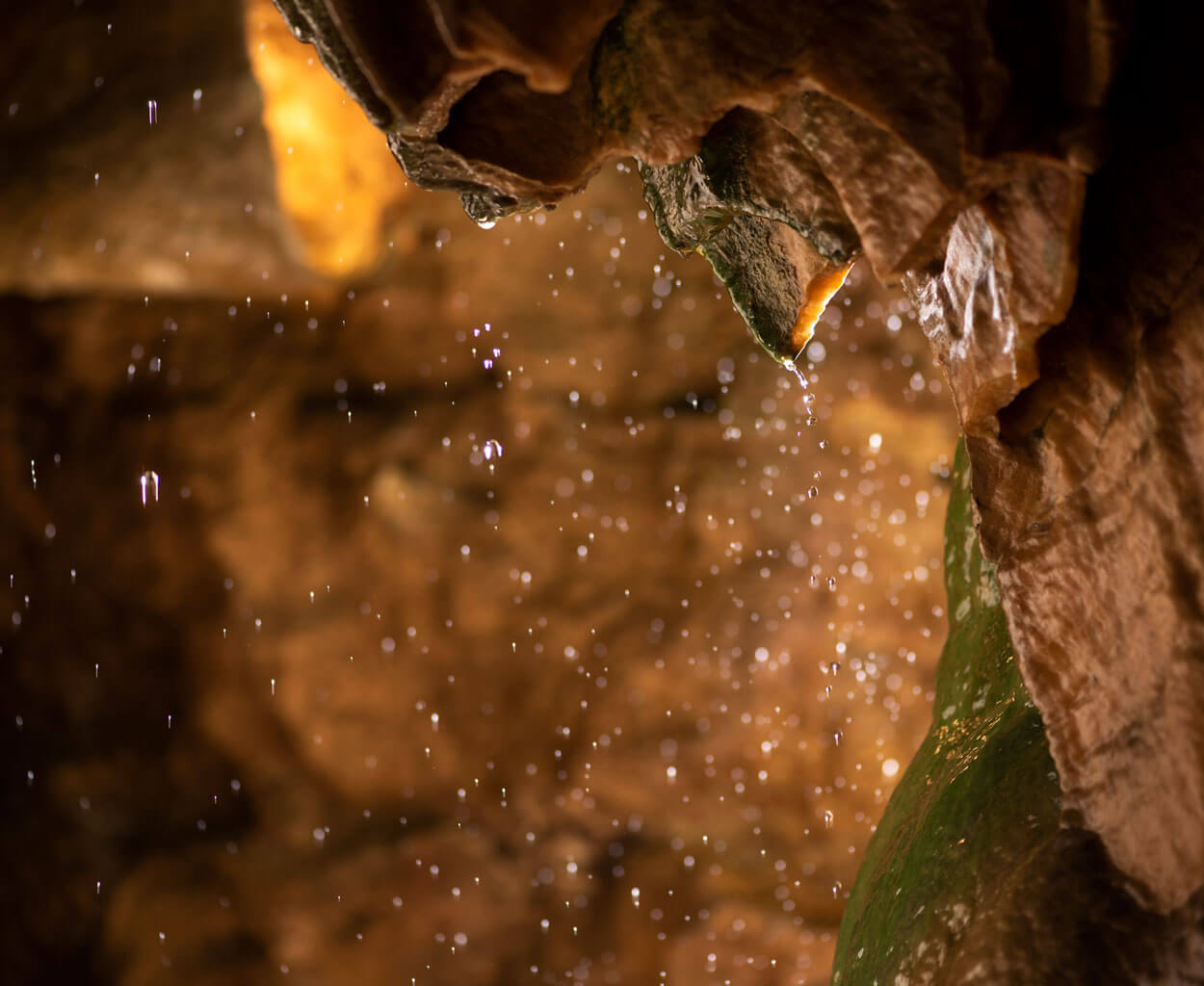 Water drips from the ceiling of the caverns. photograph by Jack Sorokin

As the story goes, in 1822, two fishermen were hanging out at a nearby stream when they realized that fish were swimming underneath Humpback Mountain and disappearing for long periods of time. When they followed the fish, they discovered the caverns.

In the late 1800s, Thomas Edison commissioned geologist William Earl Hidden to find platinum to help invent the light bulb. Hidden went to the caverns, and though he didn’t find any platinum there, he did carve his name on a stone wall. Later, Union and Confederate soldiers hid in the caverns to evade conflict during the Civil War. They passed the time by making shoes and selling them to the local mountaineers. The troops were eventually found and arrested for treason.

But perhaps the most striking story associated with the caverns is that of two teenage boys who waded through knee-deep to waist-high water in the caves with only a lantern in 1915. When one of the boys dropped the lantern, they were plunged into complete darkness. Today, all of the lights in the caverns are electric, but Mistichelli gathers us together and turns them off so that we can experience what those two boys saw — a whole lot of nothing. Not the person to your right or left; not even a hand in front of your face. My mind knows it’s temporary, but my heart races. Suddenly, Mistichelli flips on the lights, and the group instantly comes back into focus. But I can’t help but think about those boys and how terrified they must have been. It took them quite a bit longer to find the light — two days. 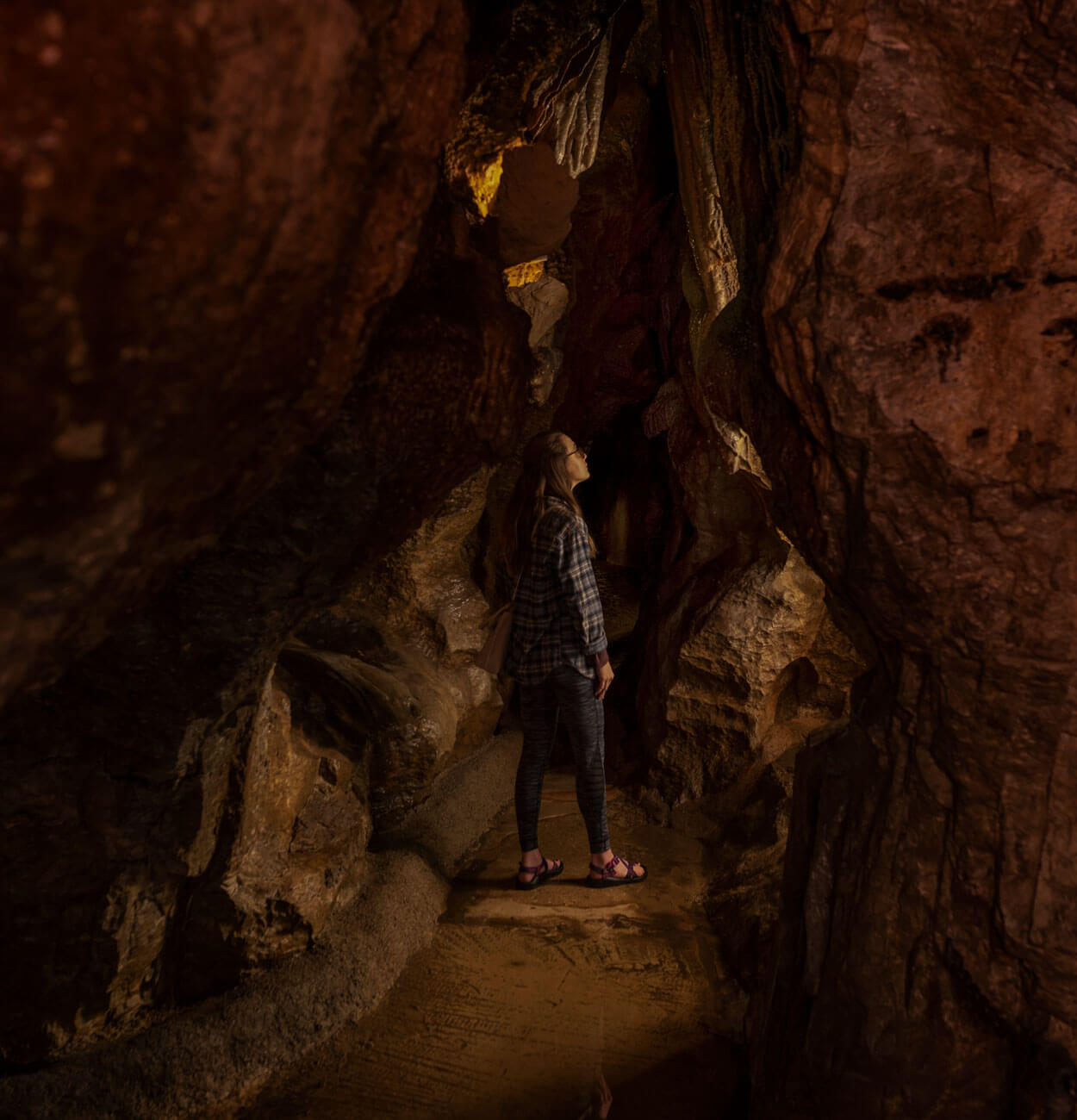 So much remains unknown about Linville Caverns. A 250-foot-long weighted anchor was dropped into a small body of water called the Bottomless Pool and — surprise — never hit the bottom. Multiple rooms in the caverns remain unexplored, and the source of the stream’s flowing water is still uncertain. But that might just be the best thing about this place — there’s magic and mystery here, and they’re more real than any story.