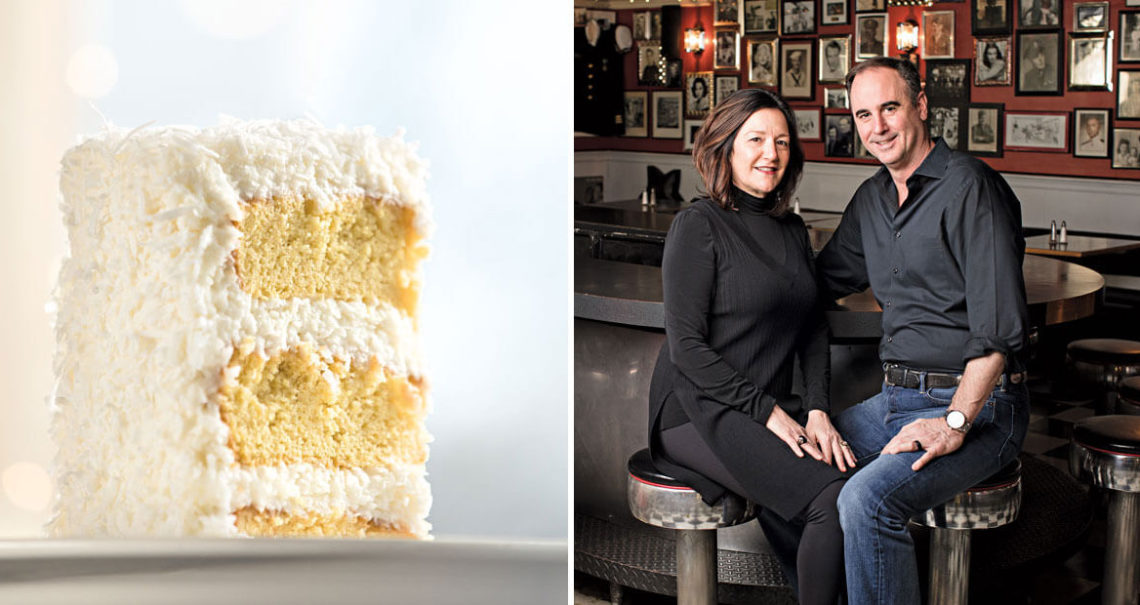 The gallery wall started with Jan Proctor. Her black-and-white portrait, displayed in a thick silver frame, was the first to hang on the crimson walls of Hayes Barton Café and Dessertery. In the photo — taken around the time Proctor served as a radio operator second class in the Navy during World War II — her arms are folded, and a stylish hat covers her short, 1940s-era curls.

Hayes Barton’s owners, Marget and Frank Ballard, fondly recall Proctor sitting at the same barstool nearly every day after the restaurant opened in 1998 until her death in 2009. She ordered various menu items, but she was partial to a hot dog for lunch and fish or pasta for dinner. As Proctor’s health deteriorated and her appetite diminished, the Ballards served her half-orders of entrée items and visited her at home when she couldn’t make it to the restaurant.

To Frank, it’s obvious why Proctor was such a loyal customer. “She loved it. She was our adopted mom. Not that they all aren’t special,” he says, gesturing to the customer photographs — most taken during their service in World War II — that cover the walls of the café. “But she is probably closest to my heart.”

Inspired by their parents — Frank’s dad served in the Navy; Marget’s in the Army — the Ballards gave the restaurant a ’40s and ’50s theme, decorating the interior with images of Hollywood stars like Judy Garland and Marilyn Monroe. Around 2000, customers began asking if they could bring in pictures of themselves or their friends and relatives. Now, there are probably hundreds of photos adorning the dining area, Frank estimates, and when customers call to make a reservation, he automatically saves their special spot beneath their uncle, mom, or grandparent.

The gallery of faces is a metaphor for Hayes Barton itself: After more than two decades of serving the community in Raleigh’s historic Five Points neighborhood, the café has become a second home to many. “I got so teary-eyed one night because I’ve seen all the families and their kids grow up,” Marget says. “They used to come in strollers, and now they’re in college or they’re getting married. Twenty-two years is a long time.” To honor that legacy, Marget and Frank recently decided to acknowledge the restaurant’s unofficial nickname on their new awning. The entrance now reads “The Barton on Fairview since 1998.” 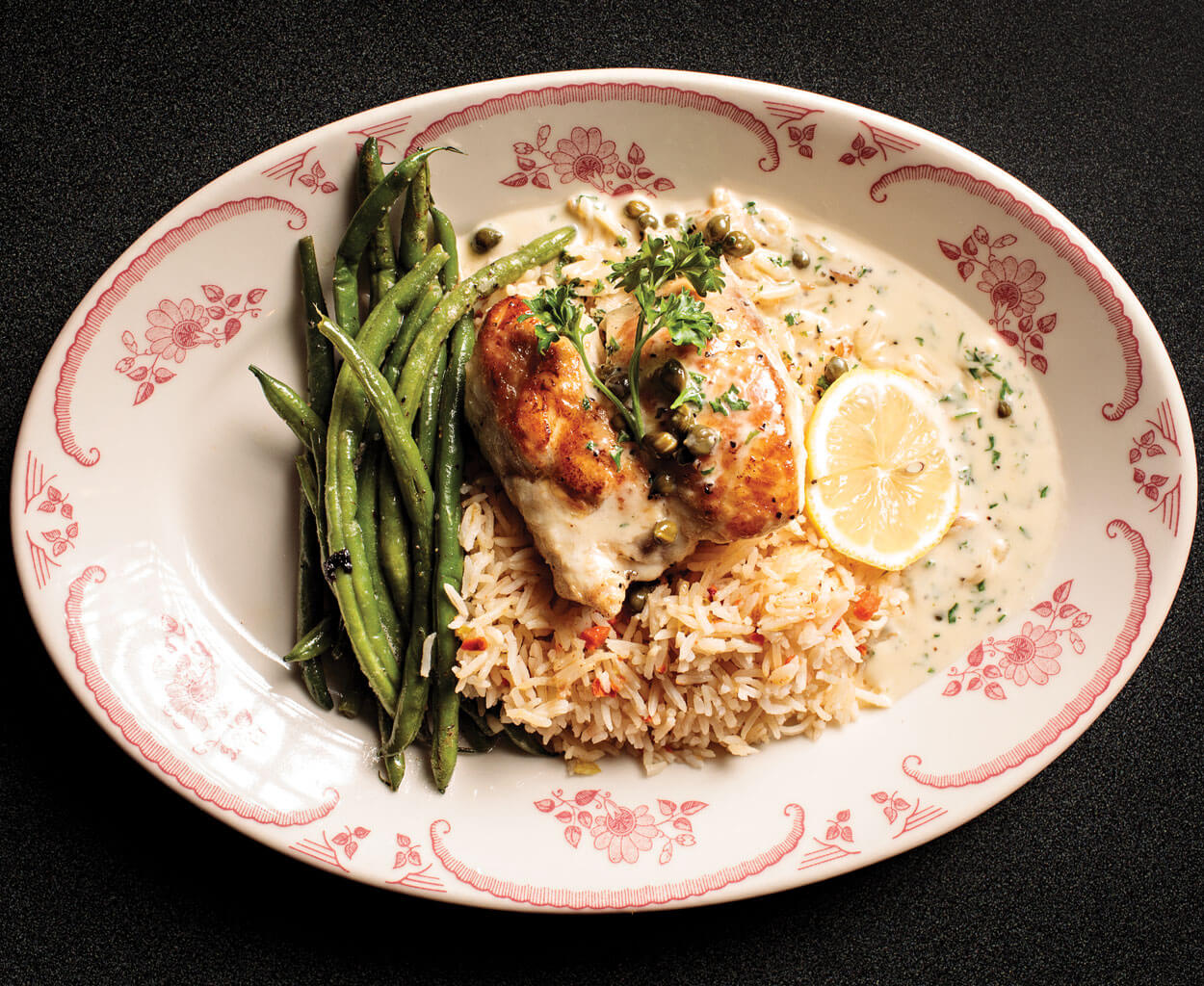 Marget and Frank Ballard serve a menu of comforting classics, including red grouper from Holden Beach, prepared with their popular piccata sauce: a light lemon sauce with capers and parsley.

Frank and Marget met in 1985 while working at the same restaurant. He was bartending; she was a cocktail waitress. “One thing led to another,” Frank says, “and a couple of years later, in ’87, we were married.” One holiday season, Marget made a sweet potato pecan pie for the restaurant’s staff to try. The manager liked it so much that he asked Marget: Could she make a few more? The pies sold out, and before long, Marget and Frank had created an entire dessert menu.

What started as one pie eventually transformed into 25 wholesale accounts and a house crammed with columns of boxed cakes and pies. The Ballards worked their restaurant jobs a few nights a week and baked desserts all day, six days a week, delivering treats to businesses around Raleigh out of the back of Marget’s Honda.

After three years of working from home, the Ballards wanted their house back, and they found an opportunity when the space that once held the historic Hayes Barton Pharmacy’s lunch counter became available. Initially, they opened for breakfast and lunch, serving many of the same favorites that the pharmacy offered in its soda shop days in the ’50s: pimento cheese, chicken salad, and hot dogs. Later, they switched to lunch and dinner, and have curated a core menu of home-style favorites like meat loaf with mashed potatoes and chicken pot pie topped with peas. The daily fish specials are a huge draw, too. Marget works with a seafood purveyor who brings in grouper the day after it’s caught off the Carolina coast.

But it’s Marget’s giant cakes that have brought the café the most recognition, especially the classic coconut. Most days, a line forms outside the restaurant as people swing by to purchase a slice of chocolate cake topped with Kahlúa-soaked Heath Bar; lemon-blueberry with vanilla bean cream cheese frosting; or peanut butter, chocolate, and banana “King” cake. Perhaps the biggest compliment comes from the Ballards’ youngest customers — it’s not uncommon for kids to press their noses against the dessert display case and lick the glass. “That’s pretty cool,” Frank says with a chuckle.

And when he gets a chance, Frank gathers the photographs that customers have brought in and finds a place for them on the walls of “The Barton.” Once they’re hung up and settled in, he pours a drink and raises a toast to the black-and-white faces looking back at him — complete strangers, yet right at home. Like the restaurant, Marget says, they’re here to stay for as long as possible, which she hopes is “forever.”