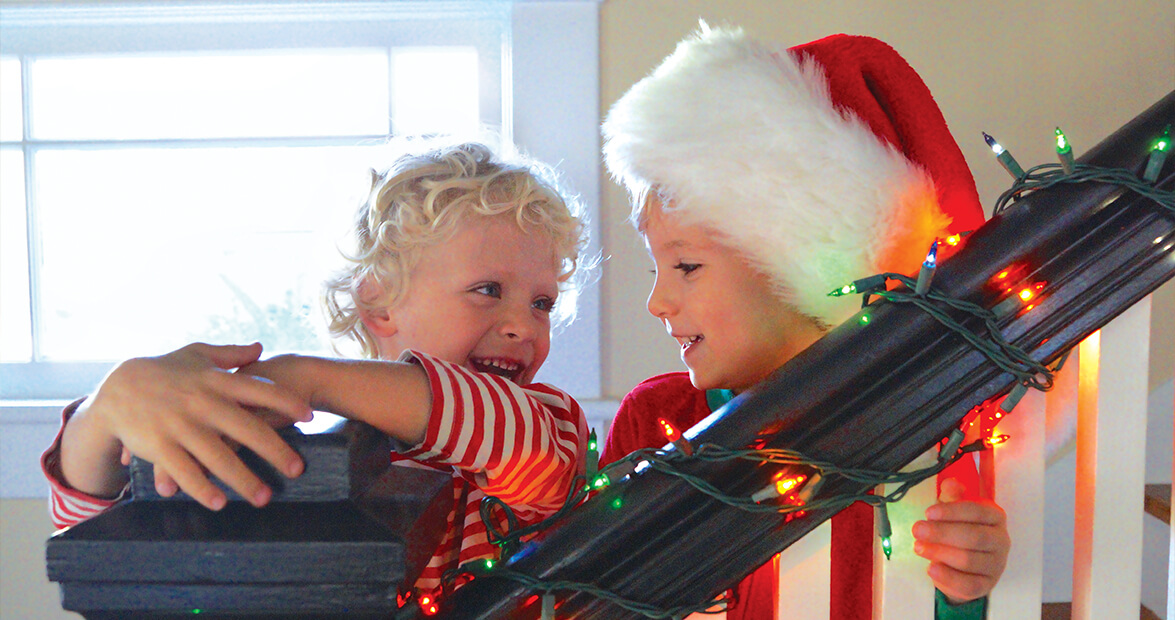 Our little one — The Wee, nearly 4 — is ringing our doorbell, yelling out, “I’m Santa! I’m here! Let’s go!” This is a marked improvement over where we were earlier in the week, when, in the course of explaining (again) the whole Santa situation, and, by extension, the whole Christmas situation, we asked him what he’d like to get for his older brother. The Wee has this way of pulling almost his entire brow down over his eyes. No one does indignant as this child does. “I am not getting him anything!” he said. “I am not a Santa! I’m just me!”

I once had a writing teacher tell me that you only get to use three exclamation points, total, over an entire lifetime. That teacher had not, of course, met my younger son. He had certainly not met him during the holiday season.

By contrast, our older son, The Toad, halfway through first grade, now wise to the world, and a man endlessly working on contingency plans, has told us this: “If you and Mamá are ever away on Christmas, and if we have a babysitter, and if you get stuck in the snow, I will go to the basement and get a snowplow blade and attach it to my rocket bike and I will pedal as hard as I can through the swamp or wherever to come and get you so we can still do all the presents.”

We do not have a snowplow blade. We live in the non-snowplow-owning region of North Carolina. And I can’t see a way, so long as the kids are kids, that we’d ever be away on Christmas.

I know folks who head for mountain lodges or beach houses or farms where one might, to quote Barry Hannah, “achieve a vista,” and I don’t begrudge them this at all, but I’ve now come to believe what my parents told me I might: Once the kids are old enough to understand, they’re going to want to have Christmas at home. In their own home, that is. It’s one of the reasons we bought this house — there’s a big staircase that opens to the living room, which is the natural spot for a tree. Last year was the first year they both really got it, and to see these boys coming down the stairs, both true believers in Santa, if not yet fully in the spirit of giving — well, one doesn’t want to give that up.

And though there’s a chimney by which one might hang stockings with care, and though we’ll be on our fourth year of hanging hundreds of silver and blue ornaments in the dogwood out front, and though we have a regular Santa we go to see at the outdoor mall down the street, those aren’t the true reasons I want to be at home. It’s that here, in the season of lights, if not light, I want our kids to be able to stand on the front walk with us in the days leading up to Christmas, and look west through the hundred-year-old oaks — only now, deep in the year, finally rid of their leaves — and see the sun go down. I want them to drink in the long, crisp winter dusk. I want them to see their tree, in their house, shining through the window. I want them to know the kind of warmth I remember coming home to as a child, the thought that at Christmas, with all those lights strung around windows and doors, we might be safe in a greater sort of way. Hopeful, even. And not just for bicycles and chocolates.

Though bicycles and chocolates are what they’re almost exclusively on about, of course. If you are 6 and 3, then this is the season of fierce want. Of wish fulfillment. Of barely, barely keeping it pasted together. Which is why I love the solstice, frankly, maybe even more than Christmas itself. On that darkest night, we can snuggle, as we did last year, on the sofa before bedtime. We can put on a record. Watch the lights on the tree blink. We can be making ready. We can be dreaming of sugarplums. Snowplow blades. Toy helicopters. The return of the light. We’ll have nowhere to go but home. Nothing to do but wait. And wait we will. And hope, and sleep, and hope.