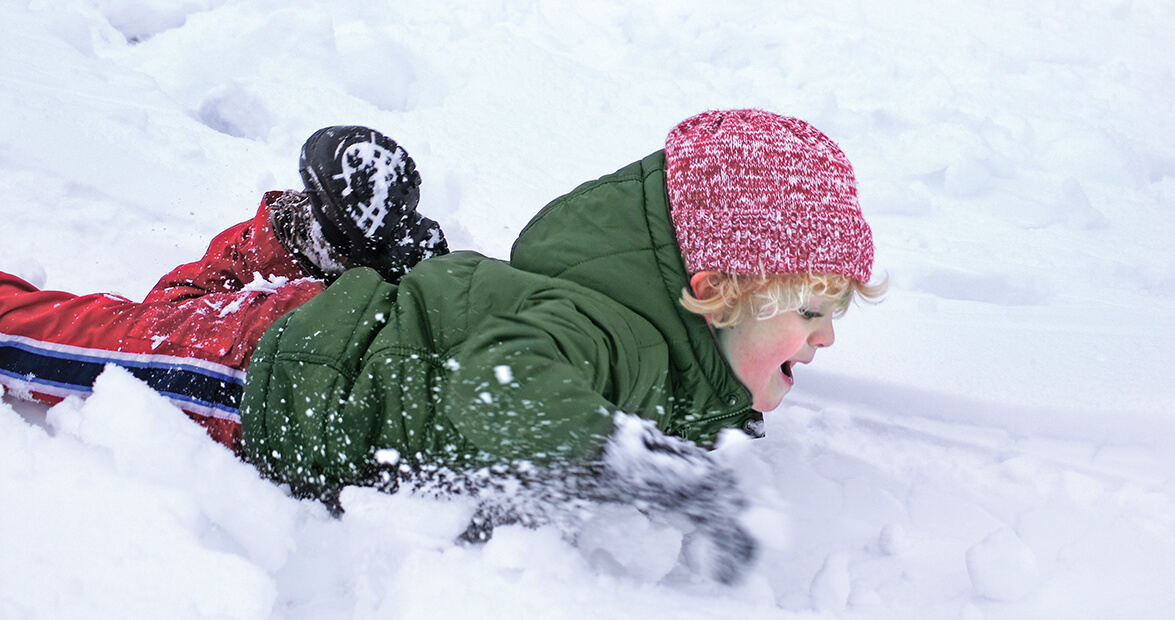 We’re on The Big Hill. We spent the morning sledding lesser, safer hills, but now my younger son, The Wee, is down for a nap, so his brother, The Toad, and I are doing as one should on a snow day: risking life and limb. Mainly his. But he’s in kindergarten and, in theory, will heal quickly.

The Big Hill is almost aggressive in its perfection. A steep run of 30 or 40 yards spools around an evergreen bramble up top, makes a sharp right hook that takes some doing to navigate, then sluices hard and fast between two telephone poles set maybe 10 feet apart. There’s a hump at the bottom; hit that right, and you catch air before a long run through an iced parking lot and out into a traffic circle. Two winters ago, in The Wee’s infancy, I drove The Toad down here, failed to properly consider where to park, and, coming to the bottom, realized: We’re going to hit the car. I bailed us out in a hail of frozen-over crust. We rolled to within five feet of the front bumper. My first thought: We’re still alive.

Note: The Big Hill is set behind a church. Every time somebody makes it through the phone-pole chute, I feel more and more like there might be some herd immunity that conveys from the parishioners to the sledders. All summer long, I convince myself, the congregation prays for us. The Toad and I hike to the top and ride our two-seater down again.

The light turns that long winter blue. The sledders thin, head back to their lamplit kitchens for soup and hot chocolate. This would be the prudent move, surely, but I am caught up in the spirit of the season — a February snow, probably our last of the winter — and The Toad is laying out a list of demands that includes (a) riding again and again, “even if it becomes the night,” and (b) going to get his brother. “Of course,” I say. “Let’s go.”

The near-burned smell of these boys’ unwashed snow clothes coming out of the dryer is the smell of freedom, of school delays and closings, of the long parenthesis of being a kid in winter. We get The Toad dressed again, load The Wee into his layers, and trudge back out, the boys chattering about how fast it’ll be, how big The Big Hill really is.

See what he sees: the hill peeling away from him, cast yellow in the sodium glare of the streetlight. Teenagers wiping out at the bottom in ways that make me want to stall my own kids’ growth, right now. “Don’t be,” I say, “everything will be fine,” and I load all three of us onto the sled — except I’ve done it wrong, we’re heavier, and here comes the left telephone pole, and I’m imagining divorce proceedings and hospitalizations, so I tip us, tumble us through, bodies and sled and snow everywhere, my fist clinched in the little one’s hood. The Toad is laughing, shrieking, telling anyone within half a mile how awesome that was. The Wee, snow in his long eyelashes, is crying.

“I promise that will never happen again,” I tell him.

And what he learns that night is that his father, like all fathers, is a liar. Three more times I convince him to go; three more times we crash. Each time The Wee cries; each time I tell him that next time I’ll get it figured out, that he should trust me, that we should go again. Finally he, lone among us, wises up. He refuses, jaw set. The Toad pitches a fit and demands to ride by himself. I let him.

I hold The Wee at the top of the hill. We watch his brother survive, and survive again. I can feel the little one’s heartbeat right through his coat and squeeze him tighter, whisper to him, lies upon lies: Don’t worry. He’ll be fine. You’ll never break your arm, never need stitches. Neither of you. Come on. Let’s get him through a couple more times, and then let me tow you both back up the street. Here. Let me fix your mittens. Your hat. See? There he goes again. He made it. He’s learning. We all are.