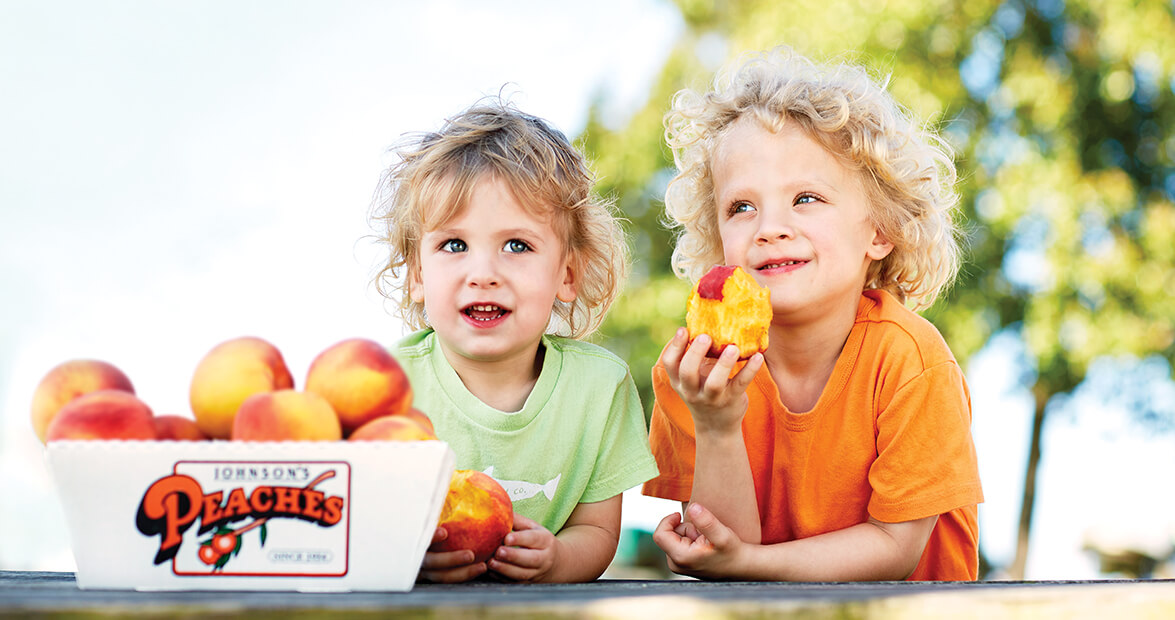 Headed south on U.S. Highway 220, just past Seagrove and pottery country, there is an exit for the communities of Ether and Steeds. The sign reads: Ether Steeds. The names are one atop the other, but still, one can’t help but think: great name for an antihero in some novel, a guy with a loyal dog, an ex-wife he still hopes to win back, and some kind of mild gambling habit. Maybe he bets on the high school tennis team. Maybe he’s also trying to build a submarine in his backyard. He makes a handful of grand gestures. High jinks ensue. He walks a tightrope between making it and not.

Letting this plan buzz through my head is how I miss the exit for Candor, and for Johnson’s Peaches.

But the kids holler and my wife hollers and I am called back to my regularly scheduled life, and we turn the car around to make good on a yearly promise: Yes, children of mine, boys of this plain, happily stable marriage, you may stand at the farmers market or a produce stand or, in this case, at the mother ship itself, the parking lot of Johnson’s Peaches, and you may eat a peach as if it were an apple. You may let the juice run down your chin and down your forearms. We will towel you off afterward, and then we can buy a whole peck of peaches and be on our way.

• • •
Of all the rites of summer, the boys eating peaches is maybe my favorite. Johnson’s, like any operation worth the paint on its sign, has it wired pretty well: The peaches for sale in the baskets aren’t fully ripe yet (so that you can get them home unbruised), but back behind the counter tend to be several perfectly ripe peaches, possibly of the scratch-and-dent variety, but still tailor-made for a kid needing instant gratification. Or his dad. What says summer more than a peach? What’s more decadent? How better to let a child in on one of the sharpest wonders of the world? Here, you say. Eat this. Tell me anything that’s better.

Johnson’s, the largest grower in the area, sells more than 50 varieties of peaches over the course of the season. I ask Mrs. Johnson — nobody seems to use her first name, though I later find out that it’s Barbara — which her favorite is. “The one that makes the most money,” she says, half-letting me in on half a joke. It’s not an easy life, she says: Back when she and her husband took over the business from his father (who planted the original orchards around 1930), “we worked day and night to keep the operation going.” She tells me there aren’t that many growers left. “Take Miss Peach,” she says. “Used to be a great competition. Now somebody just chooses somebody they know in the peach business.”

Johnson’s is the only thing at the exit — the only thing I can see, anyway. White building, red roof, gravel parking lot. Peaches upon peaches. My kids — ages 6 and 3 — care not much yet for the great sweep of history, for the saga of a region told in blossom and yield and the price of a tractor. They don’t know — and, come on, neither do I — what it takes to make a thing like Johnson’s go. They’re starting to learn, though, the difference between a real peach and a grocery-store peach, and what we’re working on, my wife and I, is teaching them about the growing season, about where things come from, about how many people work dawn to dusk to build the world around them. Yet we’re also trying to keep them from some of that — to let them just have the pure joy that is a single peach, and not have to worry themselves too much with the rough-and-tumble outside world.

The boys finish up, wiping their mouths on their hands and their arms and the hems of their shirts before we can get to them with our thousand napkins. Let Ether Steeds concern himself with spelling out his beloved’s name in burning lighter fluid on the football field, I’m thinking. Let the truly crazy stuff play out somewhere else. I’ll take — every day — this plainer life, my wife, these boys, these endless tiny joys. We take the children one at a time to the water fountain, all but hose them off. Can we have another peach? they want to know, once they’re clean. Sure, we tell them, sure, and we start all over again.