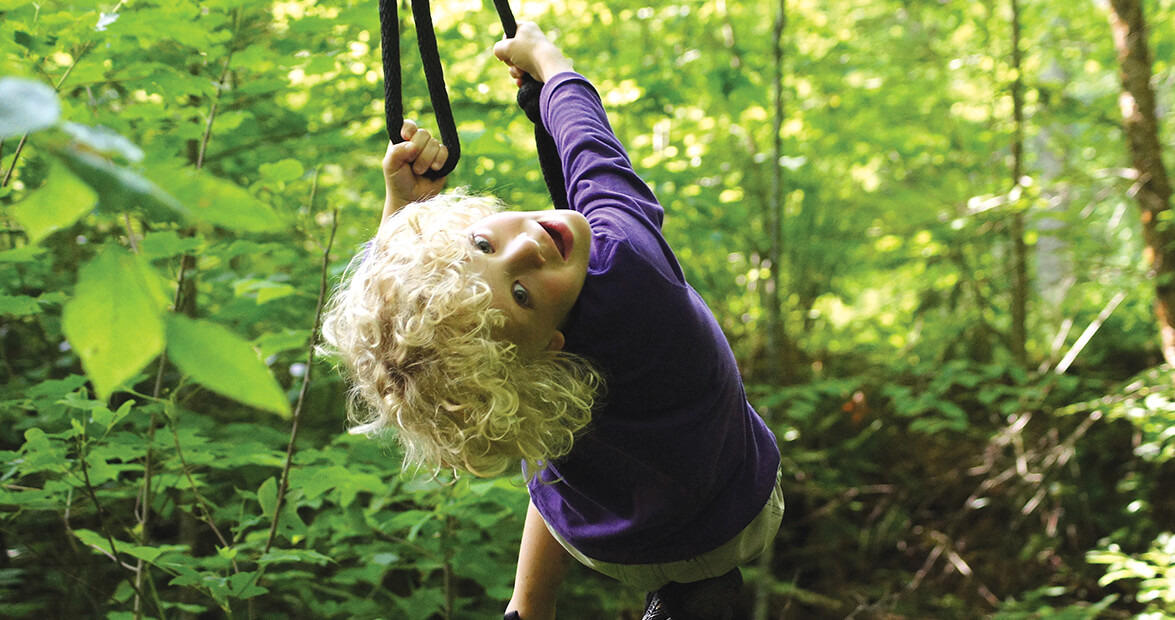 We head out at dusk, blue mountain light seeping through the forest all around. “I don’t need shoes,” says The Toad. He’s 6, my older son. Yes, you do, I tell him. “But Azulito put splinter-protection pads on my feet,” he says. “They’re invisible. She’s the Everything Bear.” She is indeed that, I say, but (a) it’s chilly, (b) she’s a stuffed animal, and (c) no. Put on your shoes.

Rumor — and the cabin’s website — has it that there’s a rope swing. The boys have never been on a real rope swing.

His brother, The Wee, 3 years old and never wrong, concurs: “The swing is better than a slide because it goes as high as the moon.” Maybe not quite that high, I tell him. “I wanted to go over it, so that means I can go over it,” he says. When it comes to verb tense and The Wee — time, for this child, is a fairly loose construct. Case in point: Anything that happened in the past, no matter when, happened yesterday. Well, yestarday. He hangs on to his Rs. “Remember yestarday,” he’ll say, “when we did go to the beach?” I do remember that, I’ll tell him, months after the fact.

Long Branch (Long Branch Creek? The Long Branch? I don’t ask anybody in town for fear of giving away the fact that I’m not a local) tumbles down this Swannanoa mountain into Beetree Creek, which empties into the Swannanoa River, which in warmer weather is an outstanding place to take these boys to wade and skip stones and generally aim for achieving gentle injury. It’s chilly, though, and we’ve arrived at the cabin so late that there’s not much time to do anything other than look for the swing. Off into the almost-dark, then. What could go wrong?

We find it at the bottom of a series of mowed switchbacks, a black rope with a couple of footholds, hung from a big maple. The knot up there looks good. Long Branch hustles by beneath it; there’s a slick, bare bank that bears testament to both how to do this and the fact that it’s been done before. The Toad, the more reticent of the two even if the more exuberant, stands in awe. The Wee already has the rope in hand.

“Do I just go from the top, and go swinging very over?” The Wee asks. “And will I never be abling to stop?”

About that. First, please don’t ever figure this language thing out all the way. You’re the second one, the last, and the shift to the King’s plain English from your lovely, mangled variant will, I expect, be even harder on me than it’s been with your brother. Second, be careful. I wouldn’t call that a ravine, but those are some big rocks down there, and if you let go, we’ll have to get the van down the hill and find a hospital —

But he’s already gone. Off into the night and then back again, silent at first, concentrating, then shrieking and even high-fiving his big brother. “Again,” he says. “Again.” Complex disputes soon arise from the problem of turn-taking. There are tears. Up the road, some cows start lowing, and this seems a calming force. Mountain cows, I tell the boys, and they look at me like the fool I am. They get the swing figured out, though, arrive at some perceived fairness, and in the ensuing peace I have the space to worry about what might happen if one of them cuts loose, or slips, and now they’re swinging over almost backward, upside down, having figured out how to make things more dangerous than they need to be. “Daddy,” they’re asking, when they swing close. “Can we come back down here right the first thing in the morning?”

Right the first thing. The Toad’s phrase. So maybe they’re not all grown up just yet. Of course, I tell them, and we do. I sip coffee, steam rising up from the big chipped mug, and fog coming off the creek, the branch, whatever that thing is that my boys are swinging over, and I think: Hold on.