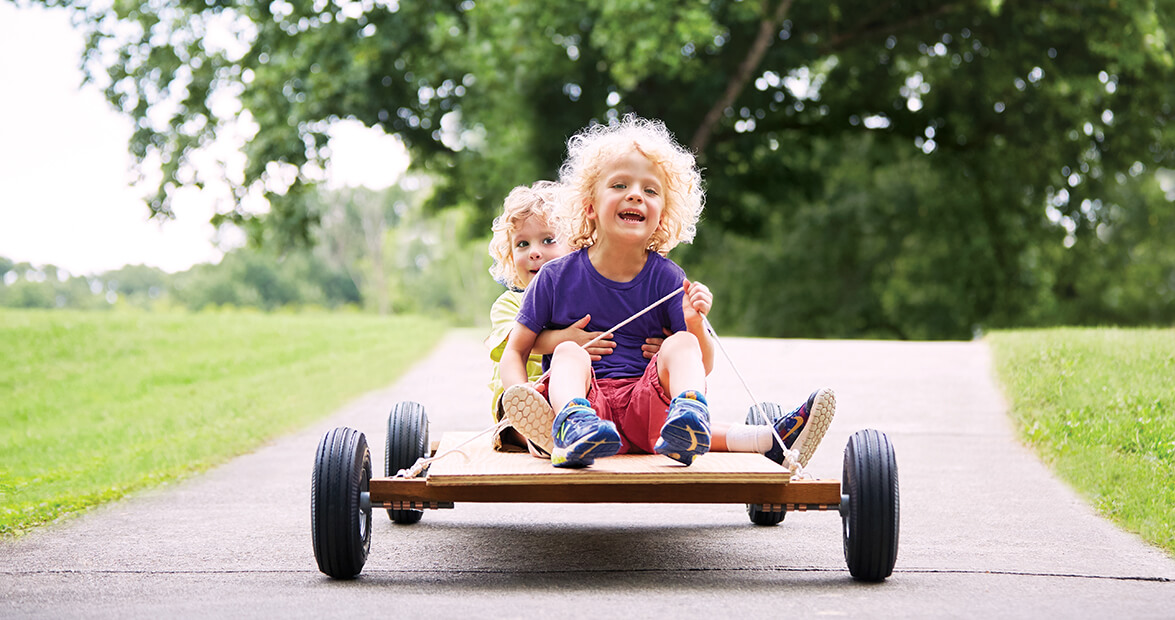 Yes, the man in the plumbing aisle of the big-box store agrees, the half-inch pipe clamps should hold the lag bolt axles to the two-by-fours reasonably well. I show him the wheels again: They’re intended for a hand truck or a riding lawn mower. We decide on five clamps per axle. Wood screws to affix the clamps. It’ll be like a sled, I tell him. With wheels. No brakes. He holds his hands up: He’s innocent. “It oughta work,” he says. “But I didn’t hear it. You didn’t tell me what you’re doing.” He grins at my two boys, who are doing flips on what they call a “gymnastics cart,” the metal dolly meant to haul lumber. “My son’s a doctor,” the man says, as we roll away. “Just started at Alamance Regional. Ask for Steven.”

Its name was Herbie the Hill Cart, and it’s a legend in our family. My wife’s father, the story goes, built this thing out of whatever he could find in his garage, and took his two girls, then ages 10 and 5, out onto the hills of Miami to ride. The story comes up often enough that it lodges in the imagination of my older son, The Toad — often enough that he determines we should have a hill cart story of our own. So I call his grandfather. They built hill carts in Cuba when he was a boy, he tells me. No set plan, no specific design. “You must name it before you ride it,” he says. “Build it big enough so they can both fit.”

There aren’t any hills in Miami. That’s a piece of the story that’s always bothered me. Could the rest of it be true? One thing we’ve got in North Carolina, though: hills. My wife peers into the back of the van when we come home from the store. She takes a long look at the tires, at the plywood platform. She puts her hands on her hips. “They’ll wear their bicycle helmets,” she says.

At first I had in mind rolling down a hill at the State Capitol, perhaps through the statues and monuments on Union Square, but it seemed a decent way to get arrested, to say nothing of the fact that, upon further inspection, there’s not much of a grade there. A few maiden voyages close to home teach us we’ll need something paved, that grassy knolls result in a bumpy ride and a loss of occupants. So I acquiesce to The Toad’s insistence that we try a “sidewalk hill,” and off he goes, coasting down a Greensboro greenway, until he pulls the steering hard to the left and crashes into a tree. Several times in a row. We’ll need something more open.

The American Tobacco Trail, crossing Durham, Chatham, and Wake counties, turns out to be an ideal venue. Here, the hill cart is a thing of beauty, gliding down a gentle slope, the boys in their helmets headed toward a landing soft enough to ensure they’ll try again. Perhaps they hit a split-rail fence. They seem unbothered, and the axles hold. They name the cart: Ruff Roo Meow. The Toad writes that in pencil across the prow.

People want to stop to talk about it — a lot of people — but not to ask why I’ve built a death machine. Instead, they smile, fold their arms, and launch into their own stories. “My dad nailed metal skates to a slab of wood,” a man says. Another: “Now, have you got air in those tires?” The hill cart seems to suggest a different era, a workbench in the garage and some pirated wheels from the busted mower and the little cabinet of drawers holding every leftover screw from every project, ever. The boys don’t know this, aren’t old enough for nostalgia: They just want to ride. Over and over, I push them up the hill and let go. Over and over, people gamely get out of the way.

Their grandfather calls them that night. “Did it work?” he asks. “Did you love it?”

He already knows, of course — you can hear it in his voice. But he’s good enough to ask. To let them tell their own story.

Purchase a collection of Drew’s columns, Adventures with Toad and Wee, at ourstatestore.com/perry.