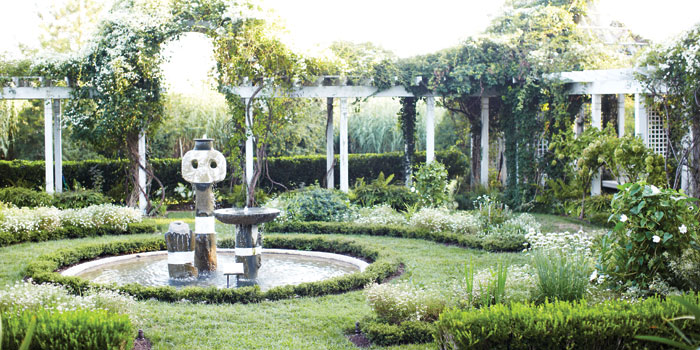 The little sign reads, “Jenny’s Garden.” It’s posted in front of a whimsical fountain with three stone pillars, all different sizes, with white belts around their middles. The fountain adds fluidity and continuity to the White Garden in which it stands.

A brick walkway and three-sided pergola border the elegant, 70-foot-square flower garden. Gentle, fragrant blooms appear everywhere, all of them white: lantana, moon vine, iris, zinnia, and gladiola. A picturesque spot for brides in flowing gowns; a good place to start something new.

There is purity here — quiet and soothing.

The White Garden is a well-manicured microcosm of the 50-plus garden beds of various sizes and themes throughout Fearrington Village — a formal place with a touch of whimsy, located between Chapel Hill and Pittsboro.

Jenny Elder grew up nearby in Siler City. It was such a small town back then that her family’s phone number had just two digits: 7-9. Her mom kept a big vegetable garden in the backyard, which taught Jenny to value eating fresh foods tilled by one’s own hands.

In 1962, Jenny married R.B. Fitch from Chapel Hill. R.B. was an entrepreneur who built houses and developed subdivisions. When the old Fearrington farm came up for sale in 1974, he and Jenny bought it — and began to cultivate what today is a quaint village, renowned for its inn, restaurant, shops, and gardens.

Jenny played an instrumental part in opening The Fearrrington House Restaurant in May 1980. The fine-dining icon — which has earned AAA Five Diamond status 15 years in a row — inspired the gardens.

“People started coming up to her right away and saying, ‘Can we have a garden wedding?’ ” says Greg Fitch, R.B. and Jenny’s son. “She was always creating, always poised.”

General blueprints for the first gardens were minimal. “There was never a master plan,” Greg says. “Things happened organically over time.

“Her creative skills put the village center on the map. She had a platform working with Dad where she could try things out and learn and grow. She had a unique vision.”

Jenny organized garden symposia that drew top British landscape designers and a former first lady. Lady Bird Johnson had a passion for beautifying America, and at Fearrington, she found a vivid example of an area transformed: from lonely cow pastures to bountiful gardens.

“When she passed away, I think there was really a creative void here,” Greg says.

The White Garden was originally a rose garden Jenny designed. “She cared for the roses … really gave them the attention they needed.” says Donna Mears, a gardener who worked closely with Jenny. “She had the knowledge to truly take care of them.”

Donna grew up in eastern North Carolina. She talks about her great-grandfather who grew his own vegetables and sold them by the road a century ago. Gardening just came naturally to her. “I think it’s in my genes,” she says.

She came to Fearrington between jobs when a friend asked her to help part-time. “And I began to think I could put my shoes here for a while,” Donna says. She and her muddy shoes have been making tracks through the gardens full-time for 20 years now. She tends the gardens with three other women.

She wanders the grounds and points out other gardens, including the ones that frame the restaurant. Chinese wisteria climbs above an outdoor patio; its gnarled branches wrap around a wooden column. Every spring, it’s an array of purple, Donna says. “When it’s in bloom, it’s just spectacular.”

She points to white oak trees in front of the restaurant and a black gum that towers almost 80 feet. “The leaves are beautiful, glossy green in the summertime,” she says as she stands back, lifts her head, and admires the enormous tree.

As she walks by one plant, she yanks a tiny, green leaf from its stem and starts chewing it. It’s an unusual type of celery — all leaves, no stalk. She passes a blueberry bush and then leans in to breathe the aroma of an osmanthus. “It smells just like the old sea-and-ski suntan lotion. Wonderful,” she says. “We’re absolutely plant geeks. We’re excited every day we come in. There’s always something new to experiment with.”

Greg Fitch is 45, thin and neat. “Look at the color on that maple,” he says, his face echoing his enthusiasm as he walks through the Fearrington grounds. “Most of the time, I’m staring at a computer. Most of the time, I’m in charge of marketing. Landscaping is where I have fun.”

He points to a thick gaggle of vines above the wide doorway of a refurbished cow barn, now a popular location for weddings and receptions. “Lady Banks rose,” he says. “It’s just something that’s eye-catching … ”

When his parents started Fearrington Village in the 1970s, Greg worked as a busboy and clerk in the cafe and did some landscaping. And then he left — for 22 years.

He studied international relations at Georgetown University, and after graduation, he worked in the White House. He enrolled in business school at Northwestern University in Chicago, earned his degree, and moved to New York. But the corporate life began to tire him, and he started building houses in the Hamptons. “Oh, I loved it,” he says. “It was the design, siting, and landscaping part that I loved. The whole creative process for me was really fun.”

But it wasn’t much fun in New York in the dead of winter. “In Chapel Hill … there are things that will actually bloom in the winter,” he says. So four years ago, he returned to Fearrington.

Greg stops at the Knot Garden — dense, evergreen hedges tightly woven into a geometric pattern. His eyes trace the maze that mimics his journey back home.

Everything at Fearrington seems intertwined. Back in the White Garden, Jenny’s son reflects on his mother’s legacy.

“The thing about gardens is they’re always changing, always evolving,” Greg says. “The shrubs and trees are always getting bigger.” His eyes fall upon the tender, white flowers that long ago replaced the roses Jenny once grew here. “So I have no doubt she would have evolved it into something. I don’t like the idea of just freezing a garden in time.”

A gentle breeze stirs the White Garden flowers, and it’s time to go. Greg has work to do, fresh ideas to put into place. His mom would have wanted it that way. So he turns from Jenny’s Garden to nurture what she began.

Scott Mason is a reporter for WRAL-TV in Raleigh. His “Tar Heel Traveler” feature segment airs four times a week.