Every time I walk in the door, I tell myself not to do it.

I should venture more broadly, I think, and break out of this rut. The choices are more tempting by the week. But I’ve been eating and drinking at the Players Retreat in Raleigh for more than 35 years, and the old ways are hard to shake. My mind ping-pongs between the Bernie Burger, named for the restaurant’s original owner, and the Chicken Gus, so dubbed for the current proprietor. Those are my typical choices. I ignore the dozens of others. But now there’s a pork belly banh mi on the specials menu. Uh-oh. That might be enticing enough for me to break new ground.

But nope. I stay strong, as usual, and order the Bernie Burger. And, as usual, I’m not disappointed. 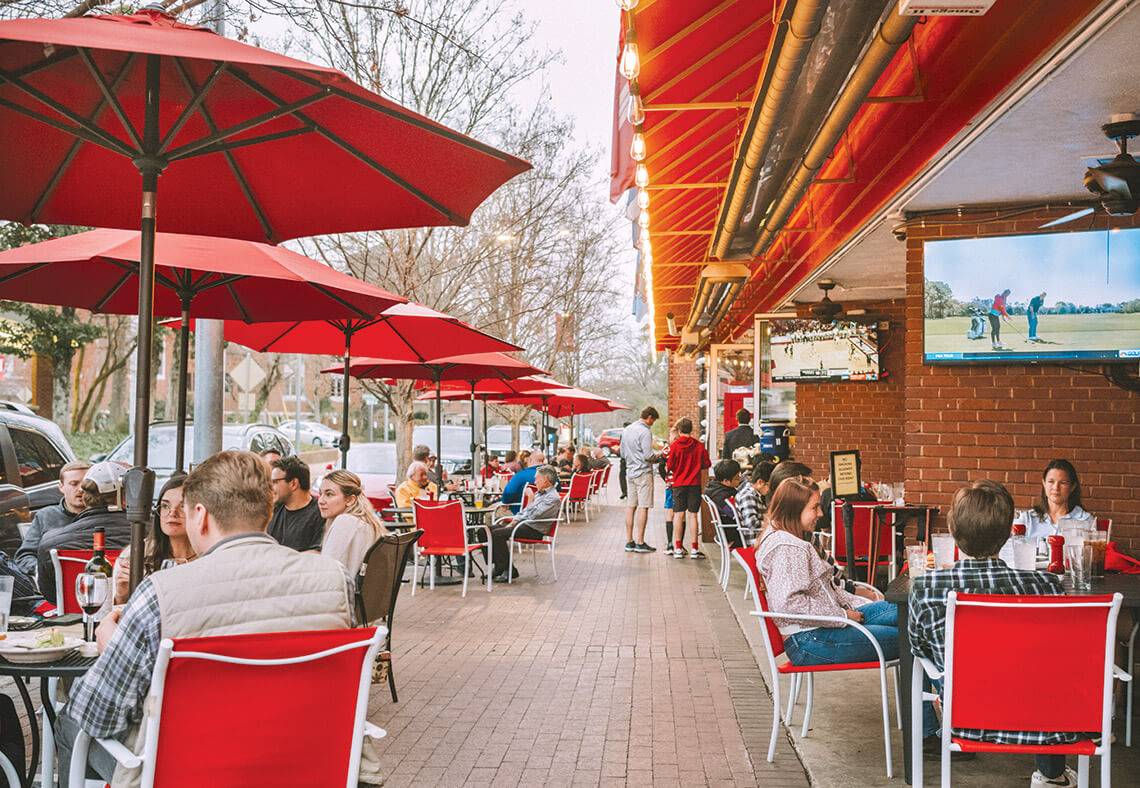 Located across the street from NC State, the Players Retreat has welcomed generations of students, faculty, Wolfpack fans, and Raleigh residents. photograph by Charles Harris

Such pull between the past and the present, the tried-and-true and the pursuit of perpetual improvement, sums up nicely why the Players Retreat has remained so relevant across more than 70 years of operation. The “PR,” as its longtime fans call it, holds court near the corner of Hillsborough Street and Oberlin Road, close enough to the campus of North Carolina State University that you might think of it as a college bar, but that’s a mistake. On any given night, it’s filled with professors, attorneys, construction workers, Beautiful People from Raleigh’s Inside the Beltline district, and even unshaven — and, at times, unwashed — writers like me. It’s a mash-up of pub grub, fine dining, beer hall, and cocktail bar whose warmth and welcoming demeanor is, at once, all too rare in the modern world and never more needed.

On the one hand, the Players Retreat is a tavern in the old mold. Hundreds of ancient beer cans serve as a sort of crown molding of memory. Scores of framed newspaper clippings and autographed photos honor Great Moments in Wolfpack History. A long bar gleams with who knows how many coats of varnish, polished by uncountable elbows over the years.

On the other, the PR’s food is outrageously good, whether you order the tried-and-true burgers or step up to hand-cut certified choice steaks or even a weekend special of pan-seared red snapper with roasted cauliflower rice cake and a basil cream sauce. Such expertly handled breadth has won the PR more awards than you could shake a hand-battered onion ring at, but it wears its accolades like a comfy old coat.

Put it all together — the vibe and the victuals — and it’s clear that the PR, to use my mama’s maxim, doesn’t get above its raisin’. 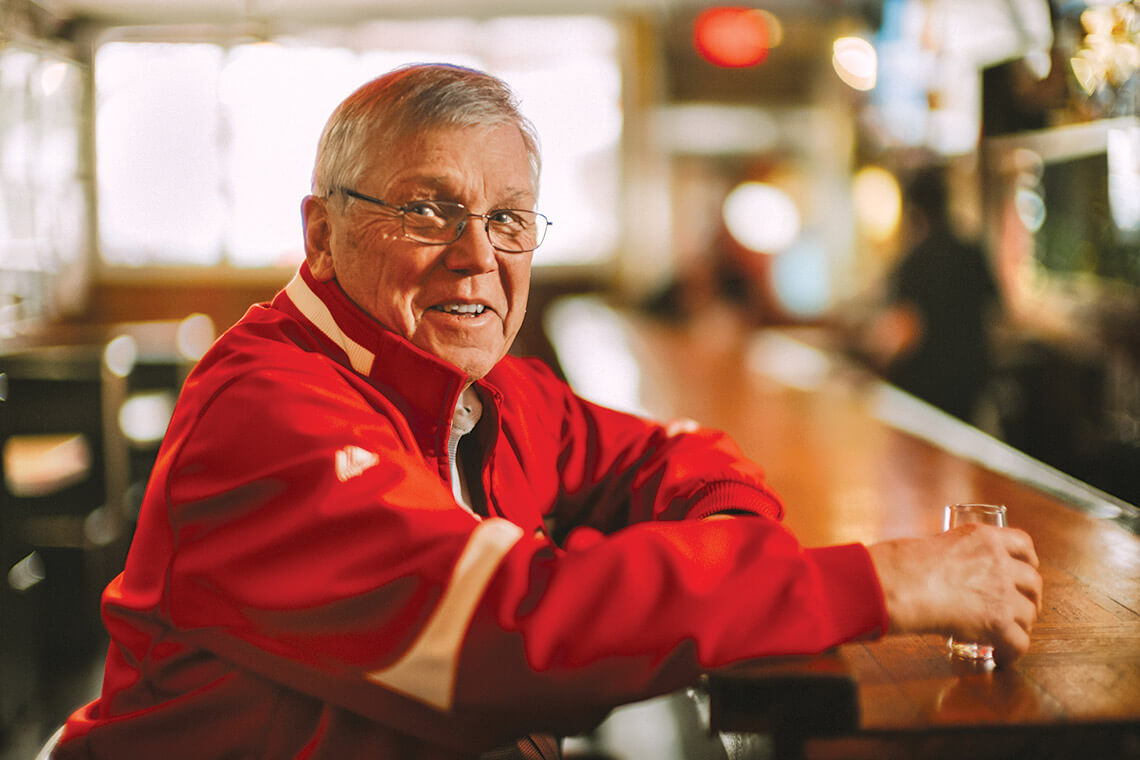 Richard “Gus” Gusler bought the Players Retreat in 2005, but his relationship with the tavern goes back much further — in the early ’70s, he worked there to help pay his way through NC State. So he was the perfect candidate to blend the PR’s old-school charm with a new vision for the future. photograph by Charles Harris

“That’s one of the greatest things about this place,” says Richard “Gus” Gusler, a Raleigh attorney who worked at the PR while in college, and who bought the business when it was about to go under in 2005. “There will be a couple in one booth dressed to go to the symphony, and there will be two plumbers with dirt all over their clothes in the booth right behind them. The PR is representative of the entire community. Everybody gets along.”

Curiously, the Players Retreat didn’t start out as a repository of sports memorabilia and a place where patrons crowd the bar any time the Wolfpack takes to a field or court. In 1951, husband and wife Bernie and Mickey Hanula opened the PR at a different location, in a tiny strip mall a half mile or so up Hillsborough Street. (The PR moved to its corner marquee location in 1961.) And it was opened as a hangout for the actors of NC State’s University Theatre, housed in Thompson Hall. Gusler grins at the irony. “Mickey Hanula was a big theater person,” he says. “She and Bernie opened the bar as a place for the actors to come after their shows. The original ‘players’ weren’t athletes, but actors.”

By the time Gusler bought the place, the PR was on the ropes. It suffered from too much competition with upscale bars, plus a years-long dose of benign neglect. When the owner pitched the sale of the PR to Gusler, he expressed the fear that if he couldn’t find a new owner, he would have to close it in a matter of days.

Gusler had bought his first beer as a college freshman at the place. He’d been a fixture for years, and had even worked at the PR to help pay his way through school. He put together a small group of investors — professors, friends, a wine distributor — who all considered the deal a last-ditch effort to save a cherished icon. No one expected to make a dime. No one had a clue how to run a restaurant.

Gusler moved quickly to boost the PR’s culinary standing. He found an ancient Hobart meat grinder in a storeroom, had it refurbished, and began grinding all of the PR’s hamburger meat on-site. In 2011, he installed Jean Paul Fontaine, a French-trained chef who’d done stints at Raleigh’s fine-dining legends Margaux’s Restaurant and Bistro 607, to oversee the kitchen. Today, Chef Jesus Romero works the magic, which is most evident on Thursday, Friday, and Saturday nights, when fine-dining specials pop up alongside the standard menu. And on the first Thursday, Friday, and Saturday of each month, Romero turns the PR into an authentic Mexican kitchen. “One day I was back there, and someone was cooking tamales for their lunch,” Gusler says. “I tried one, and it was the best tamale on the planet. Now, the kitchen is theirs on the first weekend of the month. They cook like they would back home. It’s incredible.” 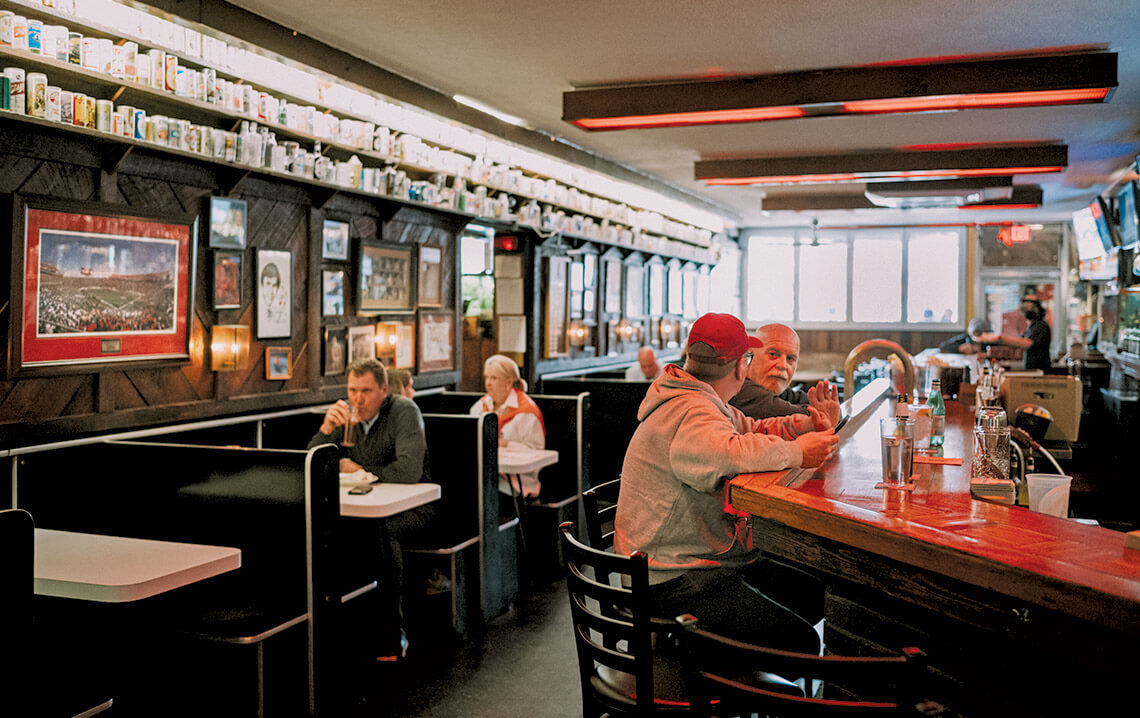 The PR’s cozy, lived-in feel is authentic — it opened in the early ’50s and has been in this location, collecting sports memorabilia; beer cans, steins, and mugs; and ever more fans, since 1961. photograph by Charles Harris

And so it goes, ever-changing additions to the menu in a place where the old stalwarts remain secure. There are 40 wines by the glass. More than 280 Scotch whiskeys in what is likely the most impressive collection between Atlanta and New York City. The beer menu runs the gamut from Budweiser longnecks to the latest concoctions from North Carolina breweries. And then there are daily surprises, like the pork belly banh mi.

It all makes staying true to my Bernie Burger ever more difficult. But given the PR’s storied past, I’m quite certain that this joint isn’t going anywhere anytime soon. And I live but a few blocks away. I’ll have at least a few hundred more visits to break my streak. Maybe next time.