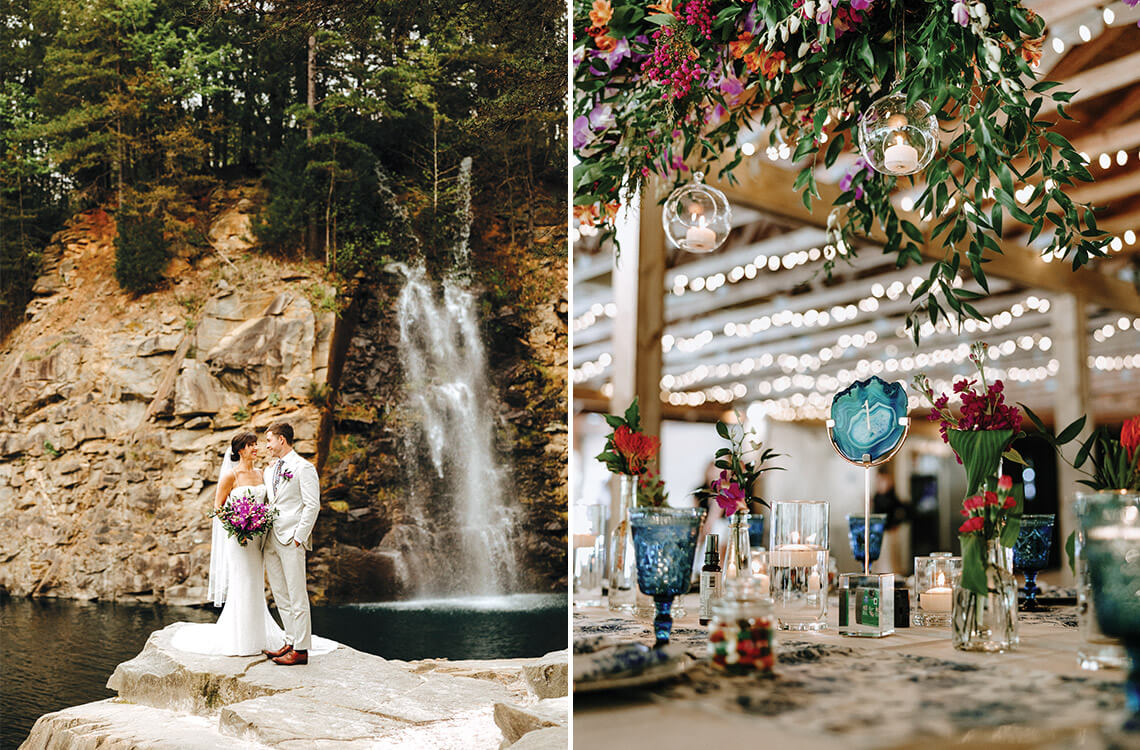 What was once a working granite quarry is now the site of many a wedding ceremony. After saying “I do” in front of the waterfall at Carrigan Farms, couples join their guests for a meal prepared with fruits and vegetables grown on the property. photograph by RYAN & COURTNEY THOMAS OF CANDLE & QUILL PHOTOGRAPHY

A North Carolina Century Farm, Carrigan Farms is a four-season exemplar of both agritourism and commodity crops. Couples exchange wedding vows with a granite quarry as the backdrop, then dine on seasonal produce grown and catered right on the farm. In summer, visitors leap into the spring-fed quarry and eat Carrigan Farms’ fruits and veggies at a restaurant on the property. Strawberries, apples, and pumpkins are seasonally available; at least five acres are planted in “specialty pumpkins — the blue and white and warty ones, the flat Cinderella ones,” Kelly Carrigan explains. Fun fact: In the ’60s, the quarry provided crushed rock to the rapidly expanding interstate system. When you’re traveling along I-77 between Statesville and Charlotte, you’re driving on a little piece of Carrigan Farms. 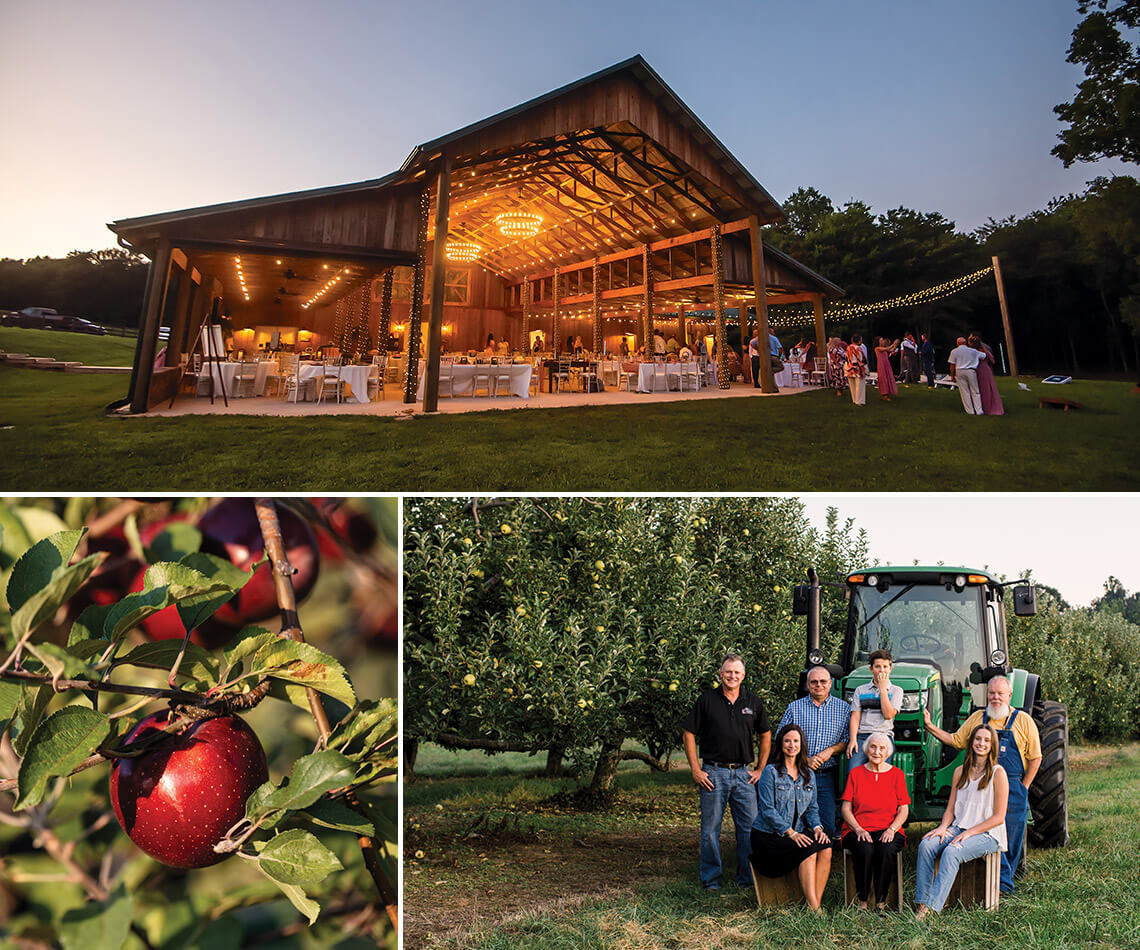 Couples who wed at Big R Orchard in Moravian Falls celebrate in a spectacular reception “barn” atop Brushy Mountain, not far from where the Robinson family tends 25 acres of peach and apple trees. The Robinsons — (from left) Scott, Angie, Linda, Avery Kate, and Luke (back row, center) — run Big R Orchard alongside longtime friends and neighbors Gray Faw (in plaid) and Chuck Elledge (in overalls). photograph by WATERHOUSE STUDIOS, REVIVAL CREATIVES

Scott Robinson’s could-make-anything father decided to add a spring-fed lake and golf course to his 150-acre farm atop the thermal belt of Brushy Mountain — until cost reality set in. To bring his vision to fruition, the Robinsons began welcoming couples to wed on a golf green “peninsula” on the lakeshore, backdropped by 25 acres of apples and peaches. Just up the hill stands the barn-shaped reception pavilion, which Scott designed and built with a little help from his friends and neighbors. It incorporates apple grading benches, “waterfall” faucets, tin siding from the apple house, and a tuxedo rack made from a beam of nearly extinct wormy chestnut so old that ax marks are still visible. 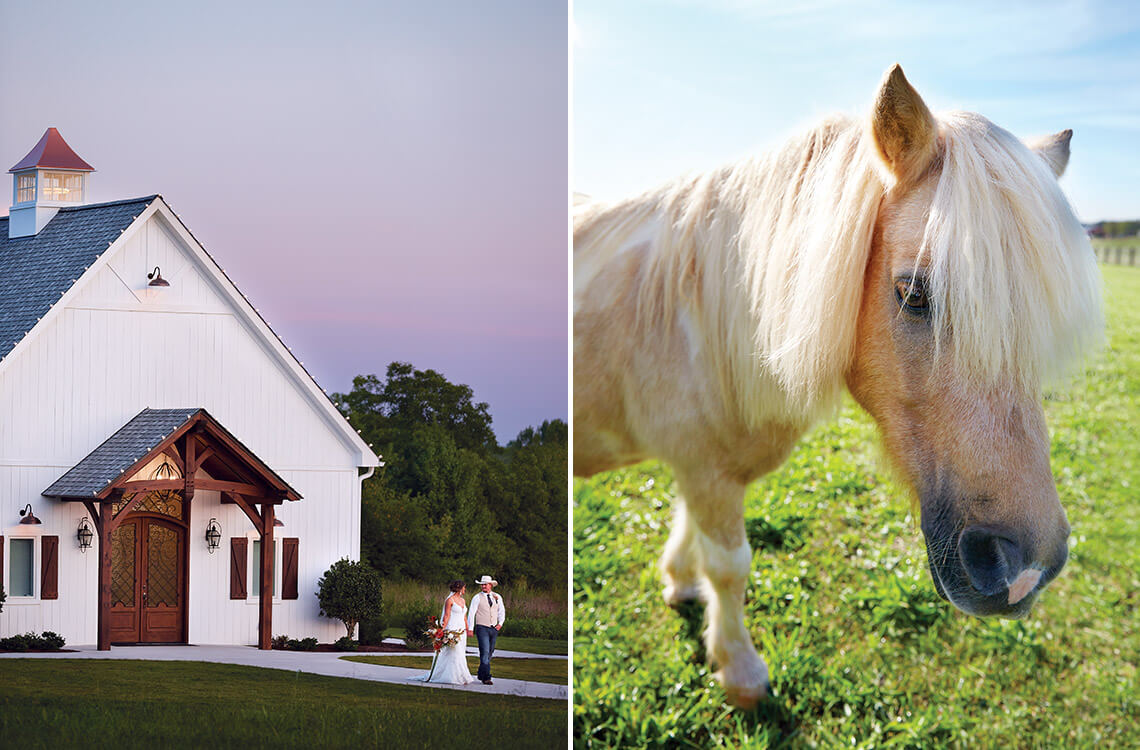 Chickadee Hill Farms is not just a wedding venue — it’s also a miniature horse rescue. For couples who tie the knot at the farm, ponies like Sandman often appear alongside them in a wedding photo or two. photograph by Stacey Van Berkel

You can find Prince Charming at Chickadee Hill, as well as a Diamond, not to mention Bubbles. All are necessities for an “I do” venue, but at Chickadee Hill Farms, they’re also the names of miniature horses — thigh-high cutie-pie ponies frolicking in pastures near the crisp white chapel, outdoor bar roofed with an old silo, firepit, Amish-built reception barn, and a bell from the 1800s to ring out the joy. A view from the bride’s dressing room — decked out in sophisticated white marble and silver shag pillows — is of silvery-stemmed, violet-hued lavender plants, simple and fragrant. That bright yellow stripe on the horizon, golden as a wedding band? Just a crop of sunflowers, turning their heads toward you. 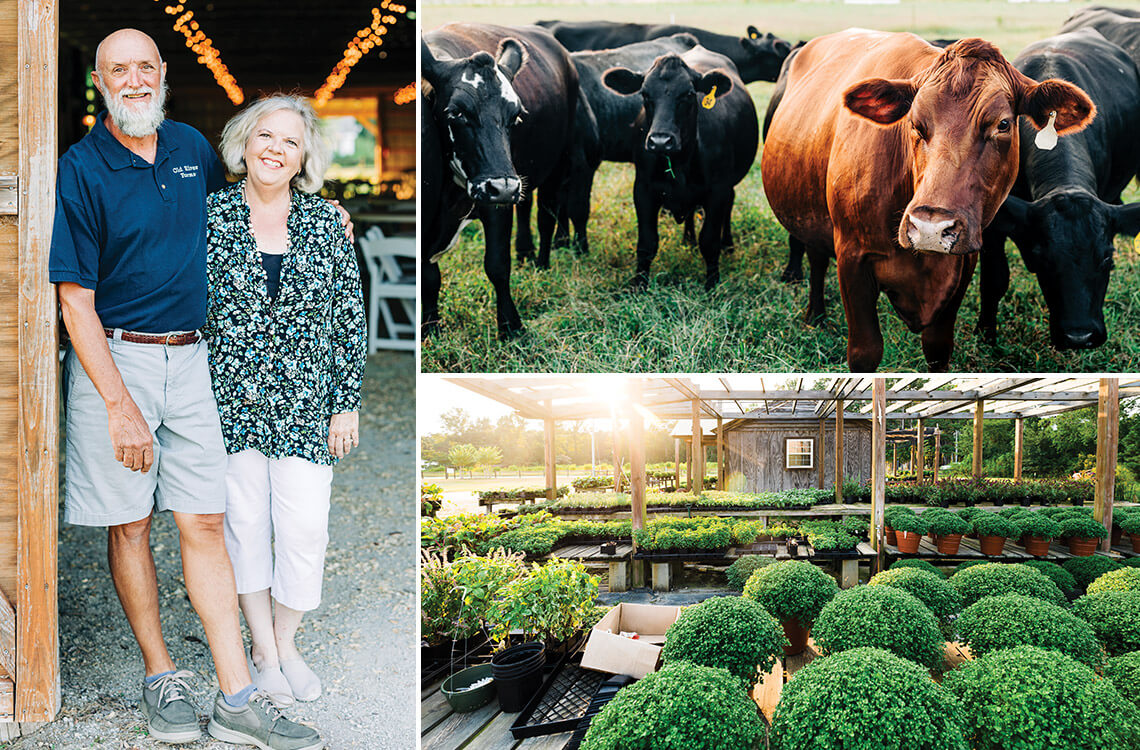 After Dean and Susan Lanier inherited Old River Farms from Dean’s father, they reimagined what their land could be: an event venue, a plant nursery, and an outdoor classroom to teach children about farm life and livestock. photograph by Matt Ray Photography

When Dean Lanier realized that his 400-acre, traditional row-crop farm wasn’t quite big enough for “the big time,” he also discovered that the property featured commercially attractive sand mines and bought three excavators. Then he bought cows “because he just likes them,” his son Michael says with a laugh. “He talks to them, scratches them.” Customers know that “it’s as good as it gets” for these 30 or so cows that do nothing but graze on at least 100 acres of grass. Michael credits his mother, Susan, with the barn-wedding idea. “It seemed silly, this miserable barn where I’d thrown hay all my life.” Now, that old barn hosts weddings and private events every spring and fall weekend. Meanwhile, whenever his kids “get aggravating,” Michael just sends them to their grandmother Susan, otherwise — and cow-wise, just perfect — known as “Mookie.” 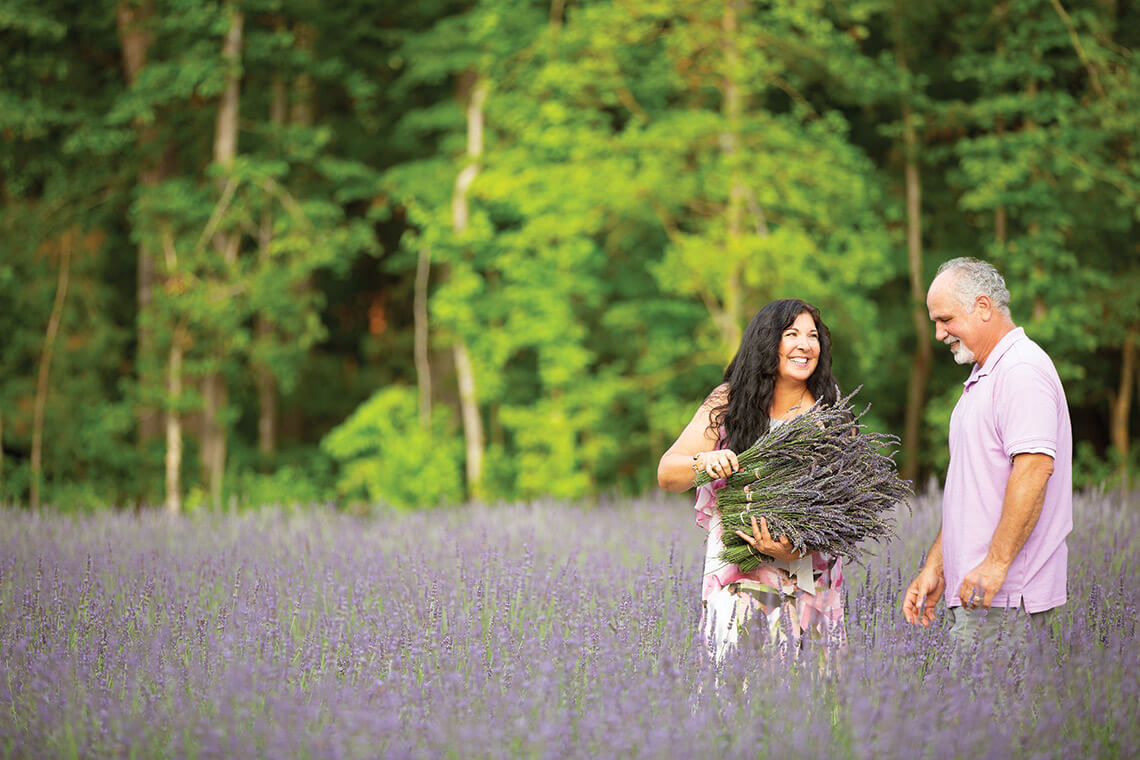 Karen and Robert Macdonald fulfilled a dream of owning their own farm when they planted their first field of lavender. Now, Lavender Oaks provides the backdrop for other couples’ dream weddings. photograph by Stacey Van Berkel

Karen Macdonald never forgot the calming effect that lavender fields in France had on her. Later, she spent two years studying before she and her husband, Robert, sold their belongings and opened a 60-acre farm featuring nine kinds of lavender. Two heritage barns from Ohio and Pennsylvania — dated 1865 and 1900, with the original “milk staining,” as well as a great-grandfather’s carved initials — were reconstructed, beam by beam, to house indoor and outdoor events. Wedding parties, guests, and often hundreds of daily visitors pluck or roam through silver-purple fields during the blooming season, and children can watch honeybees and butterflies at work. Now, the “Old Macdonald” husband-wife team have added 90 prettily twining hop bines. Move over salts and sachets: A lavender brew can’t be far behind.

When Jason Brown walked away from an NFL career in 2010, he “graduated from the Online University of YouTube” to teach himself how to raise crops on his 1,000-acre farm. When too much nitrogen in the soil burned up 500 tomato seedlings — “my babies, grown from seeds” — Brown was heartbroken until he realized that “there’s no failure in God.” Everything produced on First Fruits Farm “is given in love” to food banks, soup kitchens, and church pantries. Amazing Graze Barn, with its cross fashioned of clear windowpanes gloriously streaming sunlight, pays for the farm’s generosity. These days, Brown’s weeks begin not with Monday morning practice but with community volunteers who share a devotional before tackling cranky tractor innards and setting up fencing — doing not just good works but also God’s work. 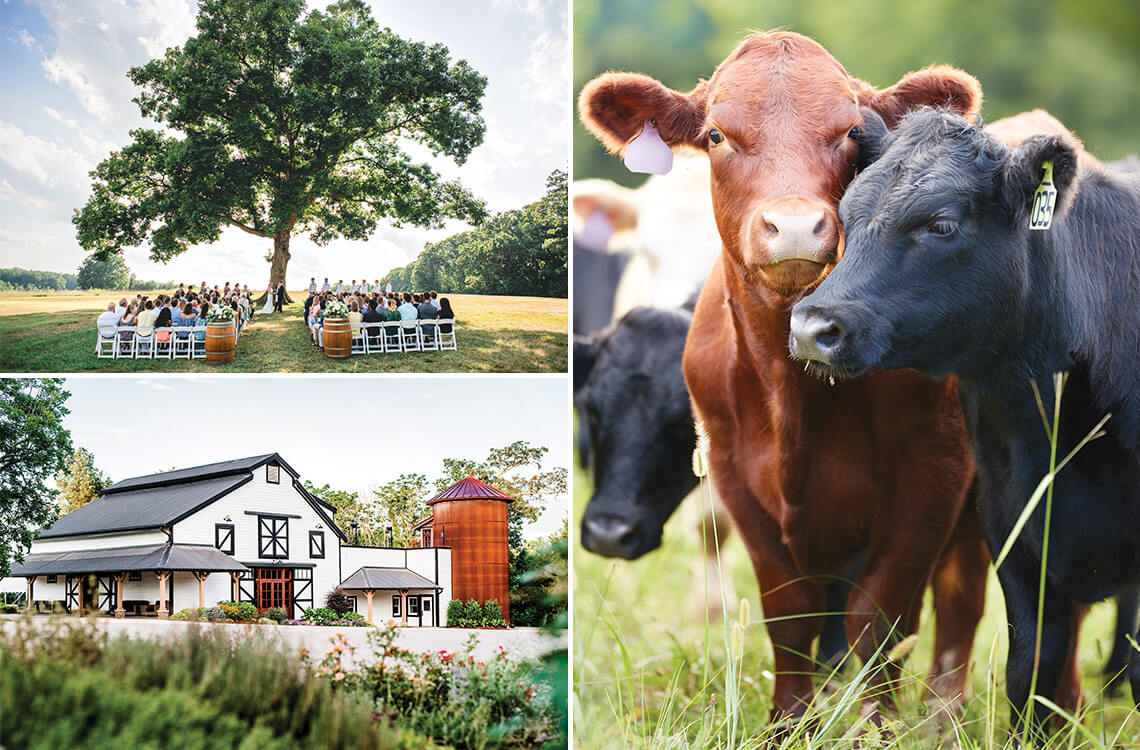 Summerfield’s cattle graze on land that has been cultivated since at least the 1930s, when the Gamble family ran it as Many Oaks farm. In 1946, the Gambles used lumber from the property to build a barn, which is one of several event venues on the farm today. photograph by GRIFFIN DAVIS PHOTO, LIZ GROGAN PHOTOGRAPHY, STACEY VAN BERKEL

David Couch has cared deeply about the quality of food since raising bottle-fed calves as a teenager. Ideally, he believes, you should know your farmer and thereby know exactly what’s in the food you eat. Couch has put this mission into practice on his 750-acre, 150-head cattle farm and market. “We aspire to bring the best-in-class local products to our customers,” he says, “and inspire them to bring other products to our attention so we can source them, too.” The result is community participation and “regenerative farming,” as well: replenishing the soil to leave a smaller carbon footprint. Next up for Summerfield Farms is what Couch calls an “agrihood” — a residential neighborhood incorporated within open pastureland — so that “young kids can grow up knowing where their rib eye comes from instead of the grocery store.” 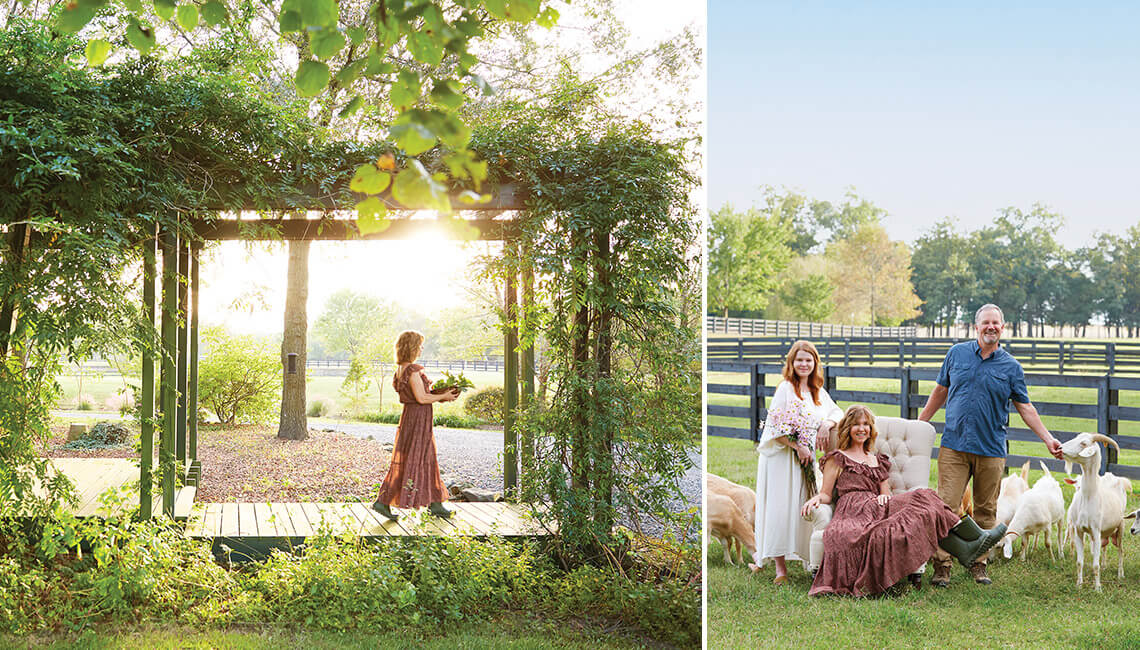 On the Vuncannon family’s farm, mother-daughter duo Mattie and Nan manage weddings and events while Scott stewards the land and animals, including a pasture full of Kiko goats. The Vuncannons’ wisteria-covered front porch overlooks the pond at Morning Glory Farm — a relaxed yet romantic view that makes it a favorite spot for wedding photos. photograph by Stacey Van Berkel

Growing up, Nan Vuncannon was embarrassed to live on a farm: At the time, “living close to the land” wasn’t cool. But in 2006, she and her husband, Scott, bought an organic flower farm to supplement their vending business, traipsing to farmers markets each weekend to sell the blooms. Then came a few rows of asparagus, requested by local chefs, then pick-your-own, honor-system blueberries, then cows to help with bush-hogging, then “super cute” goats, a small sheep herd, some donkeys, a few horses, and “everything just fell organically into place for us,” Nan says. And in 2011, when a neighbor asked to get married at the farm — with the pond and flowers and “moving art,” as Nan calls the horses, in the background — transforming Morning Glory Farm into a wedding venue just felt right, too. 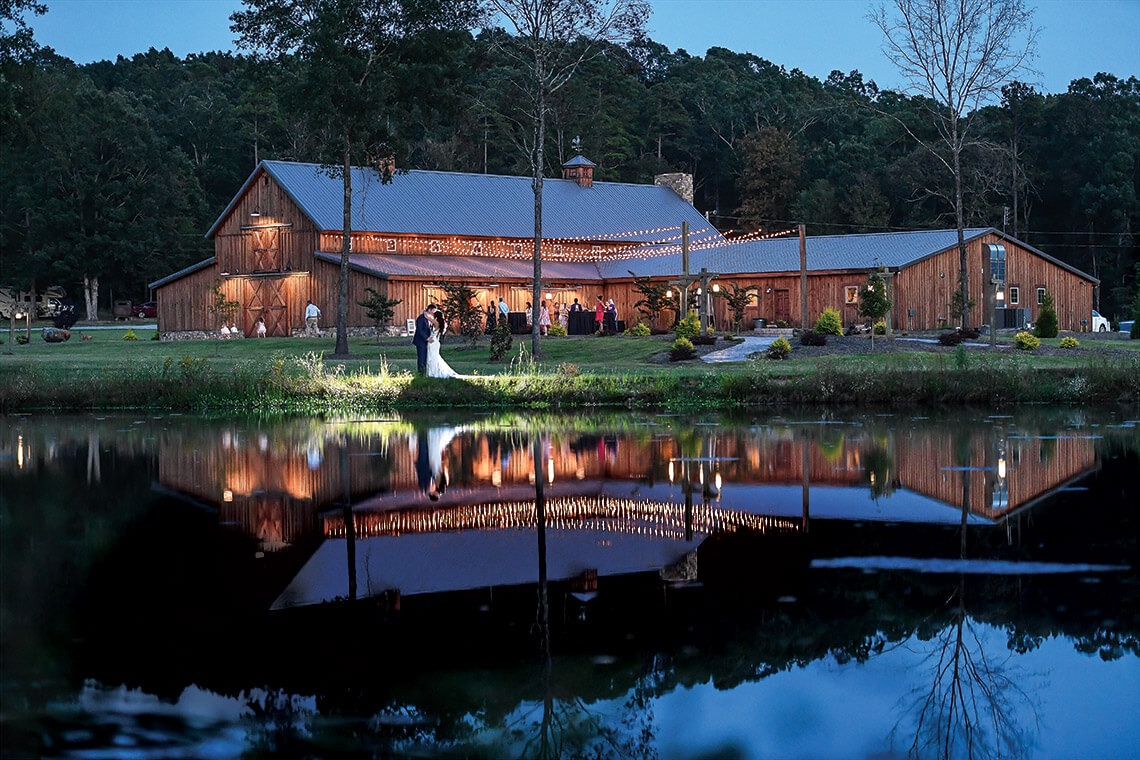 The Farmstead in Mount Pleasant is one of two event venues that allow the Porter family to share the beauty of their Piedmont farmland with couples and their guests. photograph by JOHN HUNEYCUTT PHOTOGRAPHY

The Farm at Brusharbor and The Farmstead
Concord & Mount Pleasant

“My family is passionate about farmland preservation,” Vicky Porter says, meaning that nearly all of the Porters’ roughly 1,000 acres are under protective easements: The land will never be developed. The family raises poultry, hogs, and some 350 head of cattle along with silage crops. Despite having won awards for environmental stewardship and belonging to boards that focus on farming, the family is most amazed and gratified by guests who seek them out during wedding celebrations to ask about GMOs, organic crops, and grass-fed livestock. “Many of them recall visiting a farmer grandparent, but when they see a real farm and real farm family, they’re intrigued,” Porter says. “People want to know where they’re getting their product, what they’re consuming, and I love giving that knowledge to people yearning for it.”