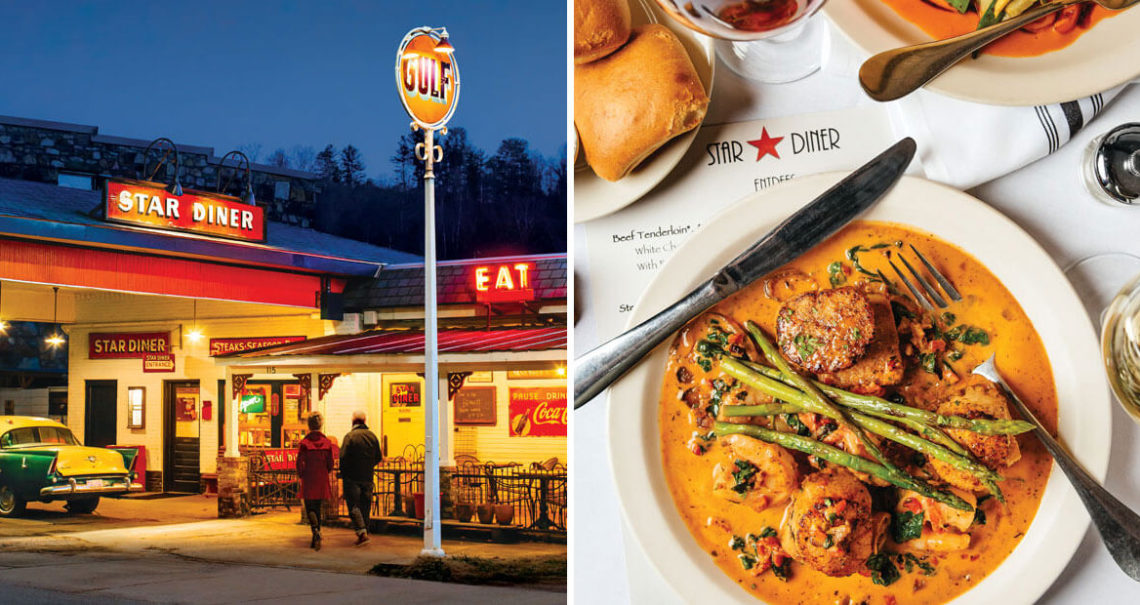 It was my cousin Larry’s fault. The Christmas we were 6, Santa left him a colorful metal toy service station, and I got … well, I don’t remember what I got because that station — with its little yellow, blue, and red cars, a lift that could be cranked up with a tiny lever, a ramp for the cars to roll down from the rooftop parking area, and two perfect pumps with miniature handles that could be lifted again and again by tiny men always ready to answer the call of “fill ’er up!” — was the swellest toy I’d ever seen.

I asked the next year and the next for a service station of my own, but instead I got lovely dolls, cuddly animals, a bake set, and all the books I could read. In the mid-1950s, no one really believed that a service station was “a girl’s toy.” Surely that is why, ever since, I’ve never passed a deserted classic gas station that I didn’t want to own. I’m not interested in pumping gas, of course; it’s what the place could become that captures my imagination. I’ve envisioned converting one into a bookstore, a vintage junk shop, a falafel stand, and once, in Albuquerque, even my home.

And that is why the first time I drove down Main Street in Marshall, a tiny, 1930s-era, white-frame Gulf station made my heart skip a beat. The vintage red-and-white neon, star-shaped sign above the entrance proclaimed “Star Diner.” Finally, I thought, someone else shared my Pump Boys and Dinettes dream. But when I walked up to the door, it was clear that the place wasn’t operating yet. This was about 2013, and every time I came to Marshall after that, I would drive by to see if the restaurant had materialized. Gradually, vintage signs began to clutter the outside walls: Wolf’s Head Oil, a rusted panel offering rooms at the Traveller’s Inn, and a golden rhombus that lights up neon green at night to say “Greenie’s Taxi.” The latter no doubt chosen to pair with the fantastic ’50s green-and-yellow taxi that showed up under the awning, followed by a Ford Model T flatbed truck with a 1922 license plate. But still no actual diner in sight.

Then, right around Christmas in 2016, I got an unexpected present when a friend told me that Brian Sonoskus, the former executive chef and 15-year veteran of Asheville’s famed Tupelo Honey restaurant, was coming to Marshall to open his dream eatery — a limited-seating, retro-romantic, vintage version of an iconic chophouse — in that magical Star Diner gas station. In other words, he created just the kind of gift I like best: one that can fill me up. 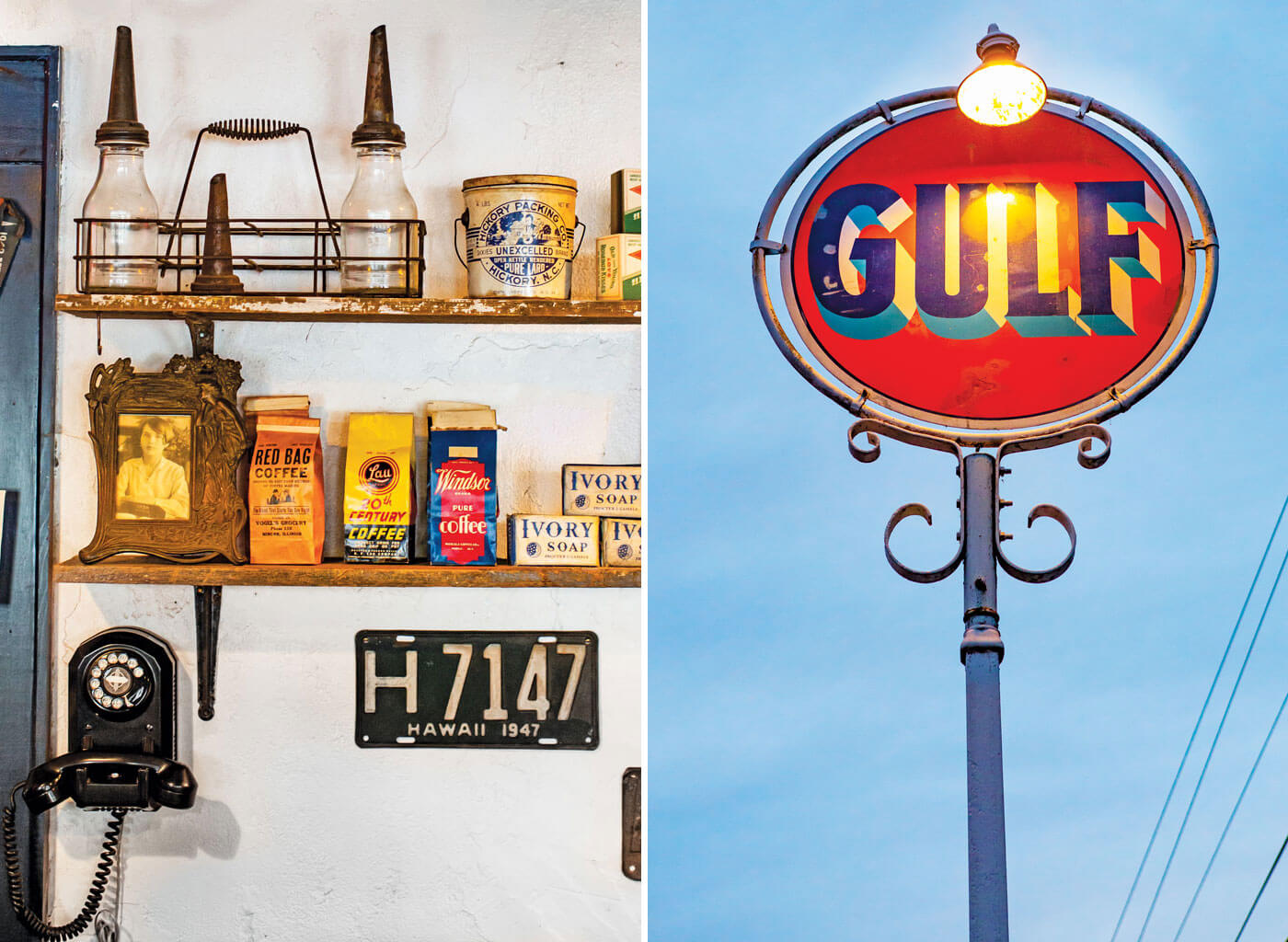 There’s no mistaking Star Diner’s humble origins — or its owners’ affinity for the past. Inside, the vintage signs and thrift store finds take visitors down memory lane over dinner.

Brian’s dream, it turns out, twinned that of the building’s owner, Bud Nachman, who lives in Charlotte but makes the 145-mile drive to Marshall from time to time, usually bearing new pieces of memorabilia. The vibe when you step inside Star Diner’s greeting area, with its black-and-white tile floor and old cash register on an antique bar, isn’t kitschy, and it’s certainly not Cracker Barrel. Instead, it feels authentic, like you’ve stepped inside mid-century Marshall during its heyday as a railroad town, with bustling U.S. Highway 25 — the Dixie Highway — rolling past the pumps outside.

Dark wood paneling; a long, tall bar with glassware that picks up the dancing light reflected off of the French Broad River just beyond the tracks; and tables laid with thick white linens create a mood both classic and intimate. The tiny dining room and the slightly larger enclosed patio seat only about three dozen folks, meaning that reservations are strongly recommended.

The kitchen is equally itty-bitty — and all electric, which is almost unheard-of in a professional kitchen, where gas ranges and grills are standard. But Chef Brian and his chef de cuisine, Nick Sanford, have used the quirky, close quarters to their advantage. When Brian, a tall, bespectacled man with a neatly trimmed beard and a grin almost as wide as his shoulders, and his long-limbed counterpart, Nick, take up their posts behind the pots, they basically fill the galley kitchen. But together, they’ve worked out an instinctive choreography, which makes what emerges from the kitchen all the more wondrous. Everything is freshly made, so late diners may find that some menu items have sold out. Not to worry: What remains will be just as delightful. Kate Sonoskus, Brian’s wife, a co-owner, and the house manager, says, “We’d rather have 35 customers at the end of the night saying everything was perfect than have 45 saying, almost.”

And perfect does describe the likes of flaky lump crab cakes accented with a just slightly spicy roasted jalapeño aioli; crispy fried brussels sprouts tossed with bacon, Parmesan, and pickled cherry peppers; and an intricately layered cylinder of divinely salty roasted beets with a cashew pesto for dipping. And that’s just to start. Brian’s menu, executed with Nick, also a Tupelo Honey veteran, features classics such as aged beef tenderloin crowned with both bordelaise and béarnaise sauces; steak aux champignons; brown butter local trout; and saltimbocca made with a Southern fried chicken breast instead of veal.

Kate works the front desk and dining room, greeting regulars by name and putting newcomers immediately at ease. She moves around the cozy dining space with contagious delight, and says her favorite part of the restaurant may be the koi pond outside in the enclosed patio. Then again, she also loves a framed towel from a Pullman train car, dated September 1921. It appears that some young travelers passed it around, writing bits of verse and cryptic observations — “He had such broad shoulders” and “Kings County Gin Mill” — while their train was stopped for, as one of them penned, “Ice cutting while the car waits.”

Preserving these and other touches of the past, Kate says, makes it “so easy to be transported to another time, another story, in the Star.” 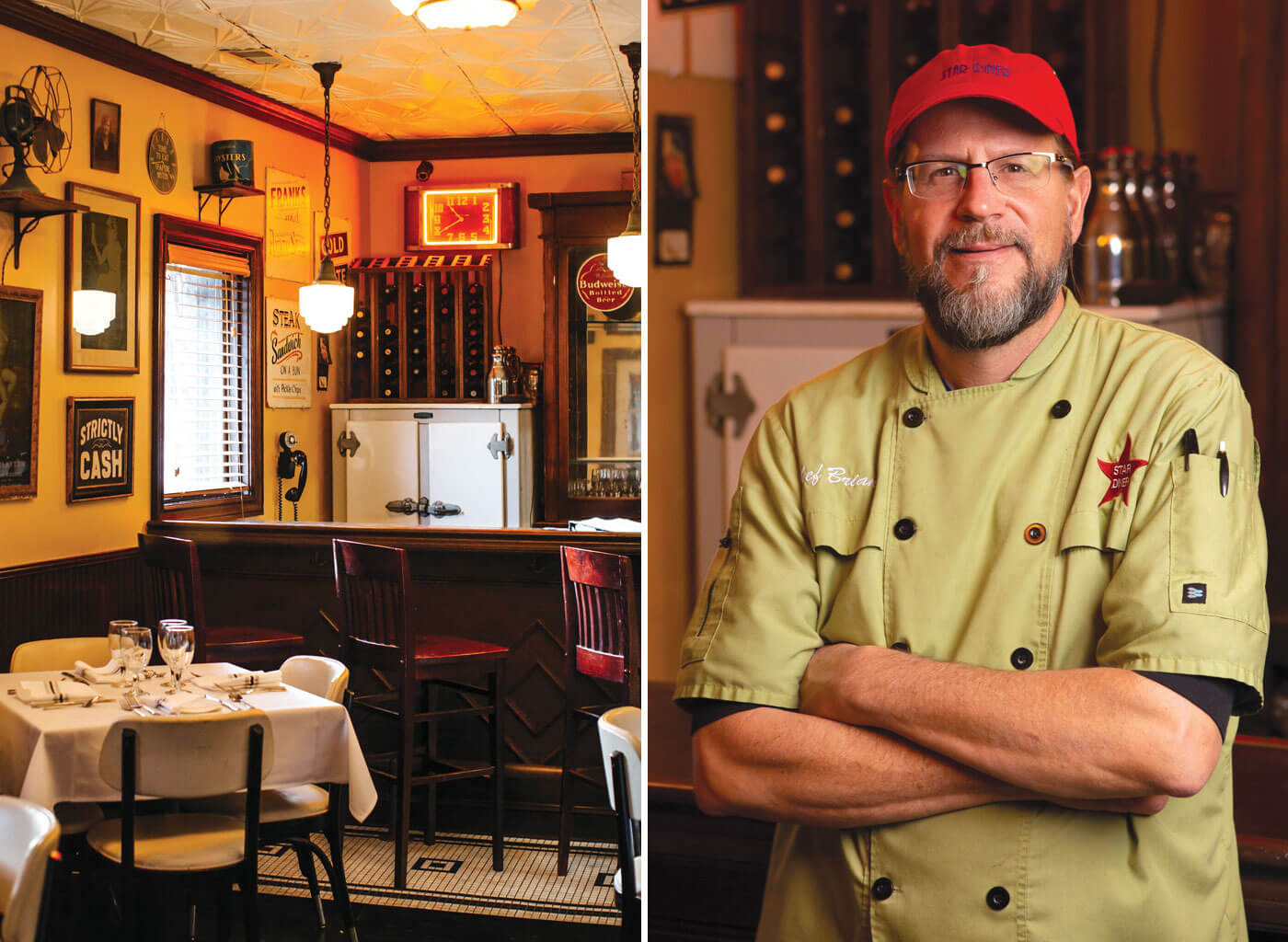 While Star Diner would be absolutely enough to put Marshall on anyone’s map, it’s far from the only enchanting instance of adaptive reuse in town. The two-story stone building that Star Diner neighbors is now home to Madison Natural Foods, a grocery featuring local and organic foods and sundries. But the big green garage door out front and the American Motors sign still hanging over the entrance betray its roots as a once-thriving car dealership. In fact, while Marshall’s Main Street may seem narrow by today’s four-lane highway standards, it was once the bustling through-route known as the Dixie Highway, or U.S. Highway 25. That, and the fact that Marshall is also the Madison County seat, may explain why more than one former car dealership here has been brought back to life with a new purpose: Nearby, the showroom windows of an old dealership now reveal a painters’ studio called The Artist Kitchen with a floor-to-ceiling mural and a row of merrily colored barber chairs. Next door, a coolly appointed Airbnb rental makes artful use of a space that once stocked sedans. It also capitalizes on the town’s other “highway” with a deck overlooking the river.

“It is so easy to be transported to another time, another story, in the Star.”

At the opposite end of Main Street from Star Diner, Sweet Monkey, a delicious bakery and café, has taken over what was once the repair garage for a Chevy dealership. The showroom itself was on the second floor, but now there’s no sign of the ramp that once allowed cars to be driven up to it. Transportation seems to be a theme here: The old train depot is now a live music venue, The Depot, featuring local bands on Friday nights, and the newspaper, News Record & Sentinel, has its offices in two old train cars joined together. 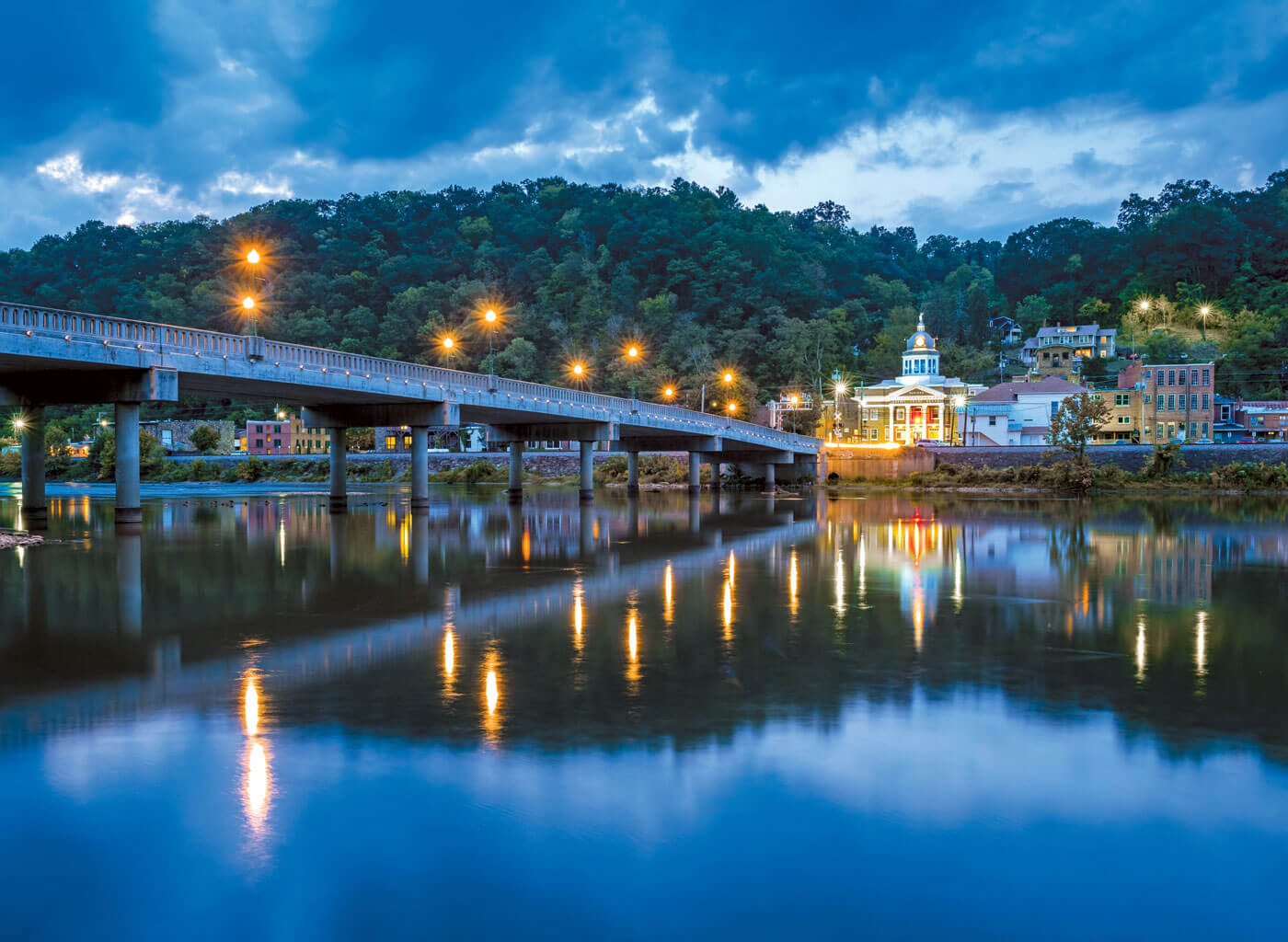 The French Broad River was Marshall’s original highway. Today, U.S. Highway 25 takes visitors to the town’s historic courthouse and nearby Star Diner, where the word “diner” doesn’t do the menu justice.

The restorations continue down the street, where Mad Co. Brew House has its cool, rustic farmhouse-style tasting room and brewery in the former town hall. Meanwhile, just across the bridge that leads from Main Street to Blannahassett Island in the middle of the river, Marshall High School, built in 1925 and scheduled to be demolished in the early part of this century, has been reimagined. In 2007, a group of investors led by Rob Pulleyn, founder and publisher of Asheville’s former Lark Books, saved it and turned the empty classrooms into a thriving complex of artist studios.

But one of the most magical transformations in town occurs every Thursday night when Zuma Coffee House, in the building that used to house Home Electric, an appliance and furniture store, morphs into a music hall showcasing a genuine bluegrass legend, fiddler Bobby Hicks, who has played in the bands of Bill Monroe, Earl Scruggs, J.D. Crowe & the New South, Ricky Skaggs, and others. With several Grammy Awards to his name, Hicks’s weekly jam sessions attract a passel of talented local musicians. Hicks’s talent brings in the occasional traveling crew, too, like Nashville bluegrass star Larry Stephenson and his band, who showed up last fall. (That night, seven guitars, five fiddles, three mandolins, one bass, and one banjo packed the front of the coffeehouse.) But it’s often the “unknowns” who bring down the house, such as local picker Scotty Owenby, who took the mic one chilly night to thrillingly sing Buck Owens’s “I Don’t Care (Just as Long as You Love Me).”

“That was No. 1 on this day in 1964,” Scotty announced, proving that in Marshall, anything old can be reborn shiny and new again. Even an old Gulf station can be a star.