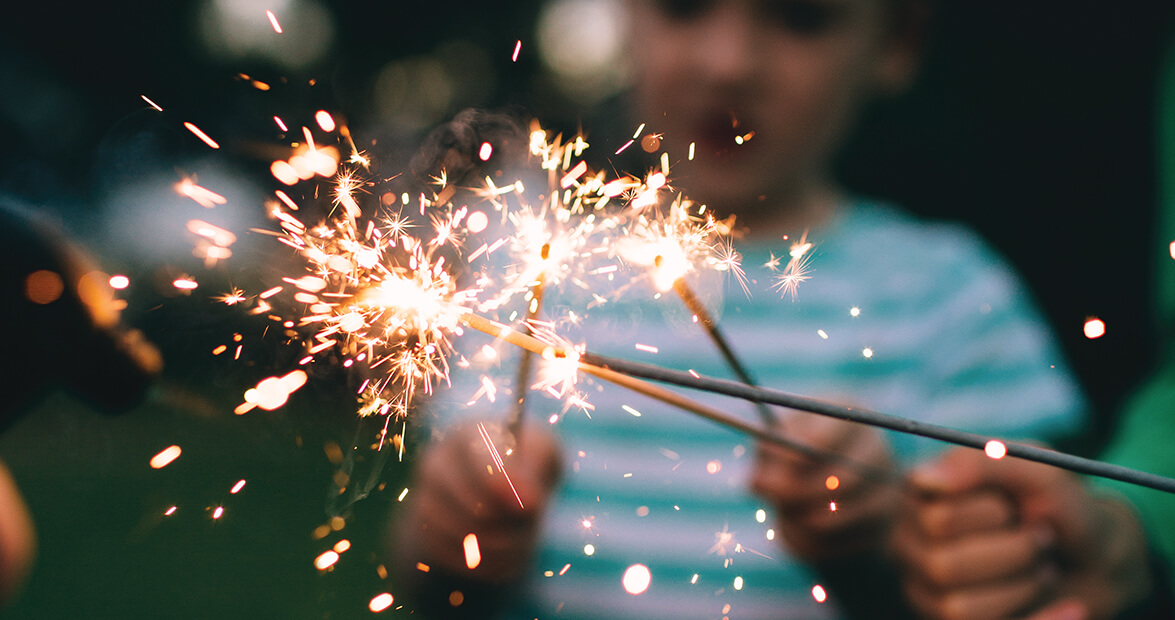 For those of us — slightly sticky with watermelon juice or ice cream — content to lie in the yard, lounge in a deck chair, or lean on sandy elbows and watch, the pleasures of fireworks, like fireworks themselves, know no bounds: the acrid aroma of burnt gunpowder hanging in the humid summer air; the shadowy figures of the fireworks lighters silhouetted by darting flashlight beams in drifting smoke; the momentous, breathless pause between the deafening boom! and the sudden splendor; the oohs and aahs of delight after each burst of light above.

A lifelong love for fireworks started with a yellow box labeled Snappers (or TNT, or POP-ITS): The contents, nestled in sawdust, looked like little onions. You slung that papery pellet down — hard — on the sidewalk or pavement, and it popped with a noise like a cap pistol. Way, way better than “snakes,” those tin thingamajigs that just lay there and feebly fizzed.

Soon, you graduated to sparklers, overcoming your fear that the flying sparks would burn your wrist, and wrote your name in the nighttime darkness, admiring the pinkish cursive afterglow. When you were a little older, you were allowed to position the bottle rockets in the Pepsi empties, fuses dangling just so. The truly brave progressed to strings of firecrackers, whose rapid-fire gunshot noises made babies cry and dogs hide.

The beauty of fireworks is that so many people can get in on the joy, and for free. Aimed heavenward from a downtown park, a baseball stadium, a pier, a mountaintop, or even a parking lot, fireworks are intentionally high, mighty, and visible from miles away.

Beyond the bang, the beauty, and the my-fellow-Americans patriotic feeling they stir in the soul, what makes fireworks even more exciting is that in North Carolina, they’re forbidden. No one ever seems to know precisely what is or isn’t illegal about fireworks, but something about them is, and that adds a thrill. Admit it: You’ve always resented the cousin who got to accompany Uncle Roger over the state line to buy South Carolina fireworks for the Fourth, while you were consigned to the carport and the ice cream churn.

Those bright, bursting beauties have actual names, like Cupid’s Crush and Cuckoo Fountain. California Sunrise. Electric Rainbow. But we watchers know our favorites simply by color and shape: the white dome that delicately collapses; the circular burst of blue; the waterfall red as lipstick; the shooting stars and crisscrossing flag colors; the trails of snapping sparks; the tendrils that fall silently as snow.

For the same few hours across the state — think of it! — a glorious display takes place in the night sky. Over a dock on the Chowan in Colerain, or a fairway in Pinehurst, or a little league field in Mooresville, or a backyard picnic table covered in red-checked oilcloth in Warrenton or Snow Hill or Maiden. Over Beech Mountain’s cragged peak or Kill Devil Hill’s smooth, shifting dunes. Wherever you sit, or lounge, or float, gazing up with awe, another neighbor, stranger, North Carolinian, is doing the same as you.

And with each showstopper, in noisy, dazzling succession, arrives the spontaneous applause and gasps — and the built-in distress that’s part and parcel of summertime fireworks: Is this the last one? Was that the finale? Because fireworks’ brilliance is, by its very nature, so brief! Nevertheless, gaze skyward for a moment longer. That rocket’s red glare, that last bomb bursting in air, will leave an afterimage not only against the dark, but inside your heart.