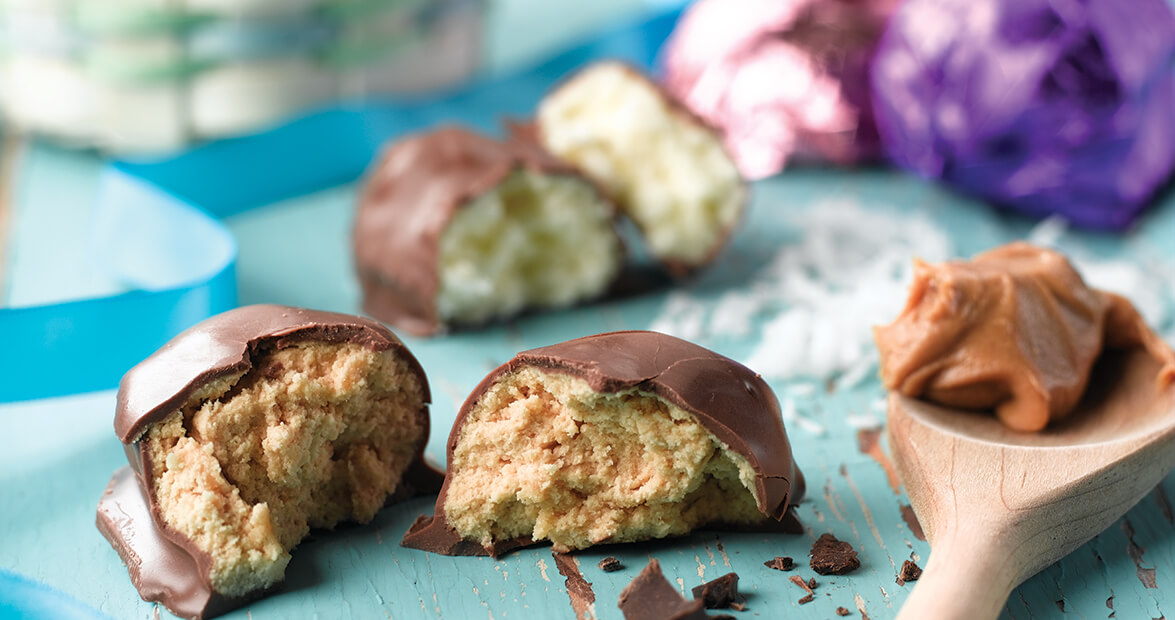 Forget the goose that laid the golden egg. The church that makes the chocolate eggs is a much better story.

For the past 21 years, Kernersville’s First Presbyterian Church — known around town as the egg church — has spent the Lenten season turning out hand-dipped, chocolate Easter eggs. Loads of them.

Last year, the church made and sold more than 55,000 eggs in the seven weeks before Easter.

In Kernersville, that’s more than two chocolate eggs per capita.

It’s more than twice the number of real eggs that a grocery store near the church sells in the same time.

Laid end-to-end, 55,000 chocolate eggs would stretch two miles, enough to bridge the gap between the church and the bank, which is precisely the point.

The eggs are a crackin’ good fund-raiser. Last year, the church cleared $22,000 from the sale, which is why other groups are always asking for the recipe. Everyone hears the same answer: “Sorry.” 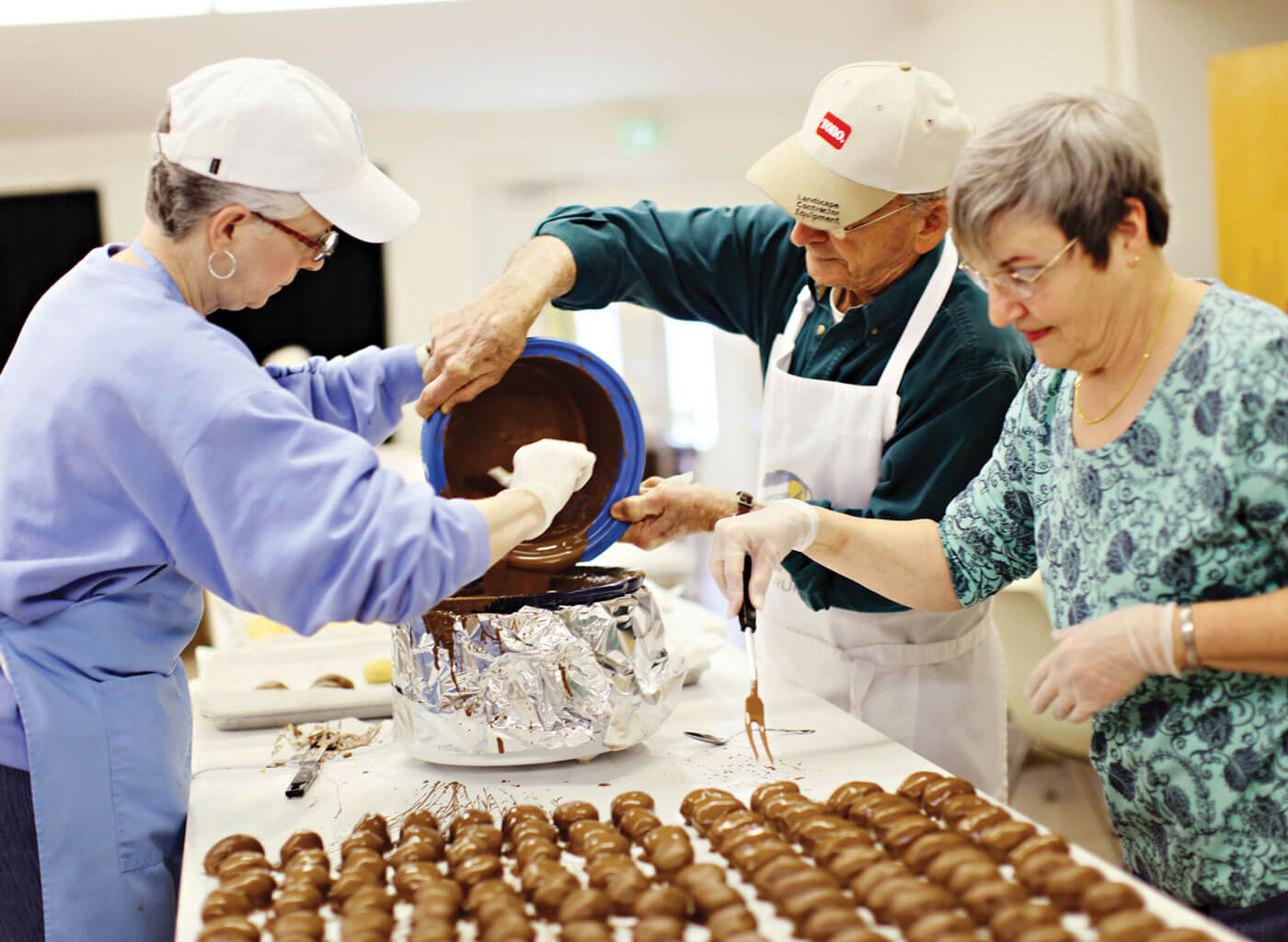 The secret recipe is part of a pact made in the late 1980s, long before First Presbyterian had a link called Our Egg Ministry on its website.

Back then, the congregation strained to pay its bills. The church had a new fellowship hall and a new preacher who was kind enough to accept his pay when the church could scrape it together. The members tried yard sales and raffles, but the take was puny.

One night, a member named Donna Myers went out to dinner with her husband, Bob, and his boss from Pennsylvania. She wondered aloud how the church might raise more money. Shoulders shrugged, but a week later, Bob’s boss sent him something in inter-office mail. It was a newsletter from a church in Pennsylvania. The newsletter described how the church sold 214,000 cream-filled chocolate eggs at 45 cents each.

A few phone calls later, Donna Myers had permission to use the recipe. The Pennsylvania church members reckoned their sale wouldn’t be hurt by a sale in North Carolina. They handed over the recipe on one condition: First Presbyterian had to keep it a secret.

She and another member, Norma Stikeleather, slashed the industrial-size recipe for a test batch. They pronounced the candy excellent, but just to make sure, they wrapped some eggs in aluminum foil and sent them to work with their husbands.

The verdict was unanimous: “Girls, you have a winner.”

Myers and Stikeleather marshaled a dozen volunteers and whipped out their credit cards to buy ingredients. If the eggs were a bust, the women, not the church, would take the hit. A new kitchen at the church was still under construction, so they set up production in Stikeleather’s kitchen.

Double boilers blazed. Mixers whirred. The air filled with a cloud of confectioners’ sugar. Every morning for two weeks, Stikeleather mopped a dusting of new-fallen sugar from her kitchen floor. About a year later, she went upstairs and opened a drawer. There was a layer of sugar.

“We did what we had to do,” Stikeleather says.

They burned out an electric mixer. They set up tables all over the house and dotted them with freshly dipped eggs. They shooed Stikeleather’s cats while the chocolate hardened. They combed Kernersville for outlets.

Myers carried eggs with her everywhere she went — to the mechanic’s garage, to restaurants, to the bank. She’d cut up an egg, offer the manager a taste, then ask if she could leave a basket of eggs and a box for money.

“Some were hesitant. Some were very gracious,” Myers says. “After that year, everyone wanted to get in on the deal.”

The ladies made 2,500 eggs that year and sold every last one of them at 45 cents each, bringing in more money than any yard sale and ensuring their cocoa creations a place in local hearts, minds, and stomachs.

“Once we had Kernersville addicted, it was no problem,” says former pastor George Murray. “Some people would come and say, ‘I have to have these. My husband eats four or five a night.’”

Myers led the egg operation for 10 years, until she could stand in front of the congregation one Sunday morning and put a match to the mortgage note for the fellowship hall. Then she passed the spatula to Faye Hodges, who still supervises the project. 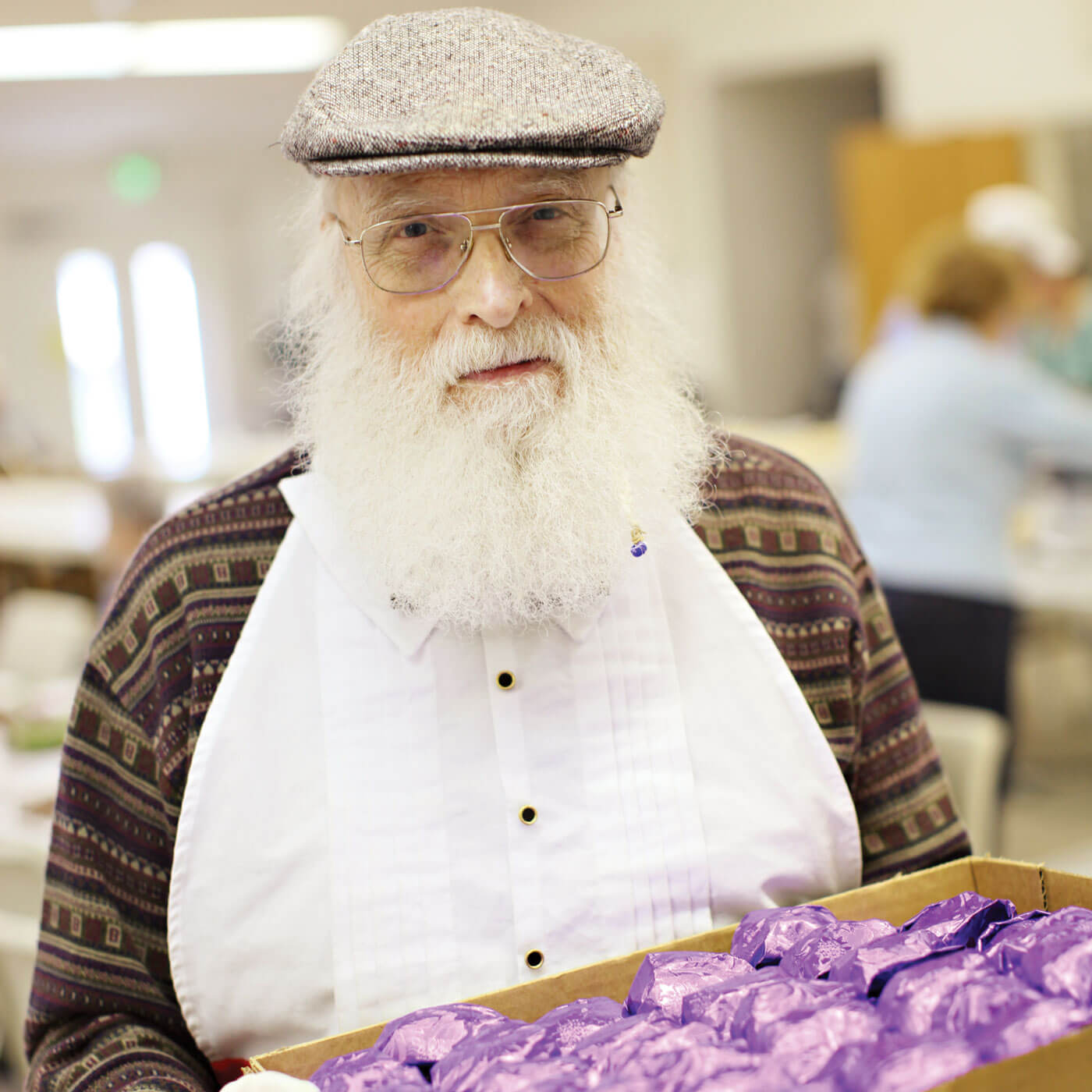 Darrell Clark is one of the many volunteers who prep and package roughly 55,000 eggs. This box will be shipped to a customer. photograph by Sara Brennan

A few things have changed over the years. Now, in addition to fielding phone calls about the egg sale, the church gets emails starting after Thanksgiving.

Stikeleather gets anxious, too — about the price of chocolate. The cost of candy ingredients continues to climb. This year, after many years of holding the price of the eggs steady, the church will hike the price by a dime to 75 cents each or $8.50 a dozen.

It’s a good thing the demand has grown.

“You think, ‘The economy is bad,’ but I guess people make do for what they want,” says First Presbyterian member Rusty Sudderth. He’s one of nearly 40 volunteers, mostly retirees, who report for egg production three mornings a week for eight weeks leading up to Easter.

The workers make a merry din. In the kitchen, an industrial mixer churns the cream filling while volunteers known as “holy rollers” use ice cream scoops and gloved hands to shape the fluffy centers. Gil Sheets, an 83-year-old retired Navy man, explains why he has helped since the candy-making began: “They shackled me to the table leg.”

Laughter erupts frequently in the egg factory. How can you not have a good time when the air is so thick with the smell of chocolate that taking a breath is like taking a bite?

Maybe that’s the key to harmony among the volunteers, who claim many denominations. The recipe might be a secret, but the assembly line is not. First Presbyterian members bring friends, who bring other friends. “We have Baptists. We have Catholics. We have Methodists,” Hodges says. “The fellowship is so overwhelming.”

So are the production numbers. On a good day, the volunteers finish 3,400 eggs. They start at about 9 a.m. and work until lunch. They stop only once — for a devotion that sometimes includes a blessing of the eggs — then it’s back to their battle stations.

Under the fluorescent lights of the fellowship hall, the dippers and wrappers work at long tables topped with shiny white freezer paper. The dippers dunk the creamy centers in Crock-Pots of melted chocolate and lay them out to cool. The wrappers get the final crack at the eggs with color-coded foil. Peanut butter-filled eggs get pink foil; coconut, purple; double coconut, lavender.

The eggs fly the coop in different ways. Customers who order by phone or Internet pick up their candy at the fellowship hall. Some of those eggs never make it out of the church parking lot. Others survive to appear in Easter baskets. Or gift bags. Or on platters at Easter dinner. Some eggs land in a freezer, waiting to be plucked from cryogenic storage and savored throughout the year.

Yet others make long voyages.

Anne Waddell, a volunteer on the egg line, buys 15 to 20 dozen eggs a year and ships them to family and friends in California, Colorado, Alabama, and Ohio. If her shipments are tardy, she hears from the recipients.

Church volunteers tote more eggs to beauty shops, banks, and restaurants, where the candy is sold with no mark-up for the outlets. The top vendor is the Plaza Restaurant in Kernersville, a family-style eatery that moves about 25 dozen eggs a day.

The Plaza’s dessert sales slip when the eggs are out front, but owner Stephen Kroustalis — a sucker for the peanut butter eggs — doesn’t mind helping First Presbyterian.

“They’re trying to do something for the church and the community as well,” he says.

The eggs continue to pay for improvements at the church, a blessing in a congregation that counts only 125 active members. But a small church needs only so much money. That’s why, after the fellowship hall was paid off, First Presbyterian started spreading the wealth around Kernersville.

“As my husband says, ‘The more we make, the more we give,’” Hodges says.

Last year, the church handed $8,250 of its egg profit to local causes, including a police-sponsored summer camp for children, a crisis ministry, the fire department’s child safety-seat program, a battered women’s shelter, and schools that buy food for the families of needy students.

A counselor at one of those schools just retired. This year, she will join the egg team at First Presbyterian. She has seen what 1,350 pounds of chocolate can do in the right hands.

Egg sale founder Donna Myers has a theory about the success of the project.

“I think God found he could trust us,” she says of the candy makers, a band of faithful folks who have worked hard, kept their promise, and still found a way to share the secret.