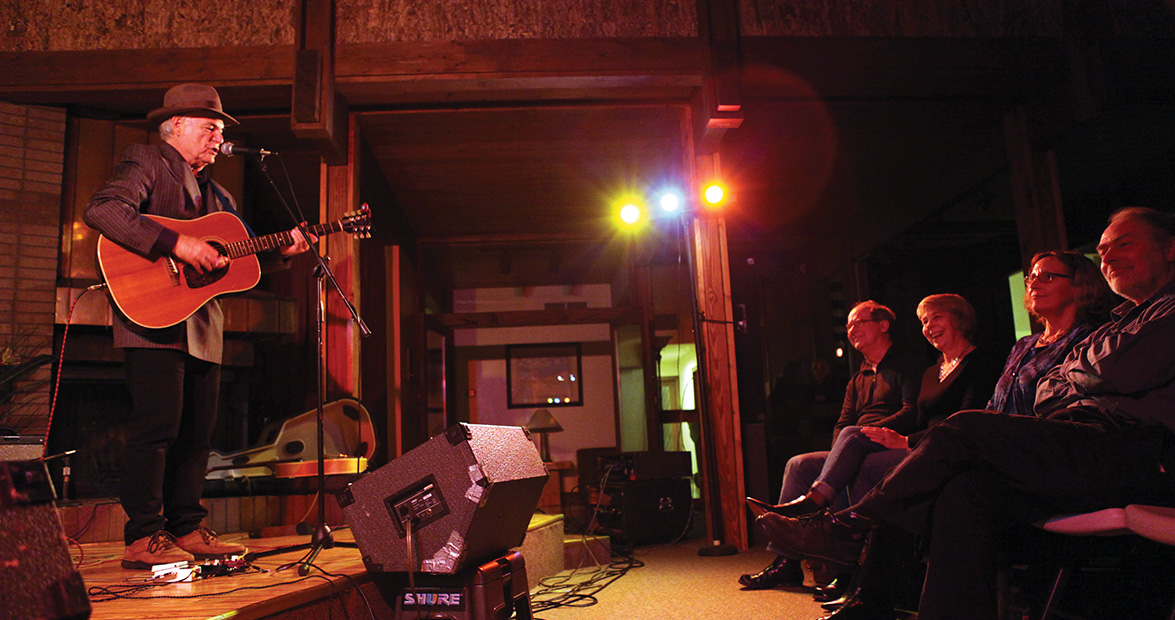 It feels like a secret society: the unlikely location, at a neighborhood clubhouse; the drive on dark and looping suburban streets to get there; and, especially, the man at the door who checks names against the list on his clipboard.

But aside from how relatively few people know about them, Forty Acres concerts aren’t secret or exclusive. Anyone can purchase tickets; pack a cooler with beer or wine; and drive out past U.S. Highway 15-501 for somewhere quieter on the edge of Durham, for the living-room feel of the Five Oaks Clubhouse.

This is where a community occasionally gathers for Saturday-night concerts. At shows in warmer months, when the sun sets later, you can see the surrounding woods through floor-to-ceiling windows. But during winter, early darkness obscures all but the shaggy outline of pine trees, and the glass instead reflects soft light and the faces of concertgoers.

Tonight, on one such crisp, blue-black evening, the musicians are Nashville-based singer-songwriter David Olney and guitarist Sergio Webb. Olney’s is a loping, theatrical kind of folk music; some of his songs tell jokes, and they all tell stories. But over the course of his set, Olney’s performance turns poignant, especially when he plays a hushed cover of Townes Van Zandt’s “Snowin’ on Raton.”

The audience is captivated. This is what they came for: a close, meaningful evening with an expert performer. At some shows, the interaction between fans and musician is playful; at others, it’s like this, musician pouring out his soul for a rapt audience just a few feet away. Behind Olney and Webb, and all who play here, a banner sums up the experience neatly. It says: “Welcome back home.”

The Forty Acres performances, now organized by a five-member board, began as true house shows. Tom Fisher, a current board member, still remembers the neighborly atmosphere of the first concert he attended. “It was Tift Merritt in the late ’80s or early ’90s,” he says. “I don’t remember the exact year, but her band brought three cases of Budweiser and handed them out to the audience.”

At first, the events were small enough to be held at a farm or in a large living room. But with popular headliners like Merritt, the series garnered a local following, and in 1998, the committee formed to take on growing interest.

Fisher was one of the first board members. He’s seen the Forty Acres email list — the group’s primary means of advertisement — grow to 1,200 people. Still, the concerts have stayed small. It’s the opportunity to sit close to the stage and to meet performers during intermission that keeps devoted fans coming back. “We get an audience that really comes to listen to the music,” Fisher says.

At some point, Five Oaks became the series’ usual venue, ideal because it seats, at most, a little more than 100. Board member Bob McClanahan says a typical audience is just 60 to 80 people.

“It’s like a party,” he says. “People start coming at 7:30. They meet new people and see friends they maybe haven’t seen since the last show.”

McClanahan was not a founding member — he joined about a decade ago — but he was drawn to the group’s support of under-the-radar bands. He’s proud to report that after the venue fees are paid, Forty Acres can give 80 percent of the money from ticket sales directly to the artist.

He also likes how democratic the organization is: The board members are always open to new musicians, and they decide on headliners together. They chip in money, set up the venue, and help greet people. On show nights, they add one more personal touch with a home-cooked meal for the band. And then they each pay their way into every show.

Tonight’s is a meaningful show for Olney, too. He was born in Rhode Island, but he went to UNC. This marks his fourth Forty Acres show, although he performed often in the Triangle area in the late ’60s, when he was starting out as a musician. The show tonight, he says, and the way the audience responded to the music, reminds him of the early days of folk music in Chapel Hill.

“It means something,” Olney says. “Intimate is such a strong word, but that’s what it is. Much more powerful than in a stadium. It was like a church.”