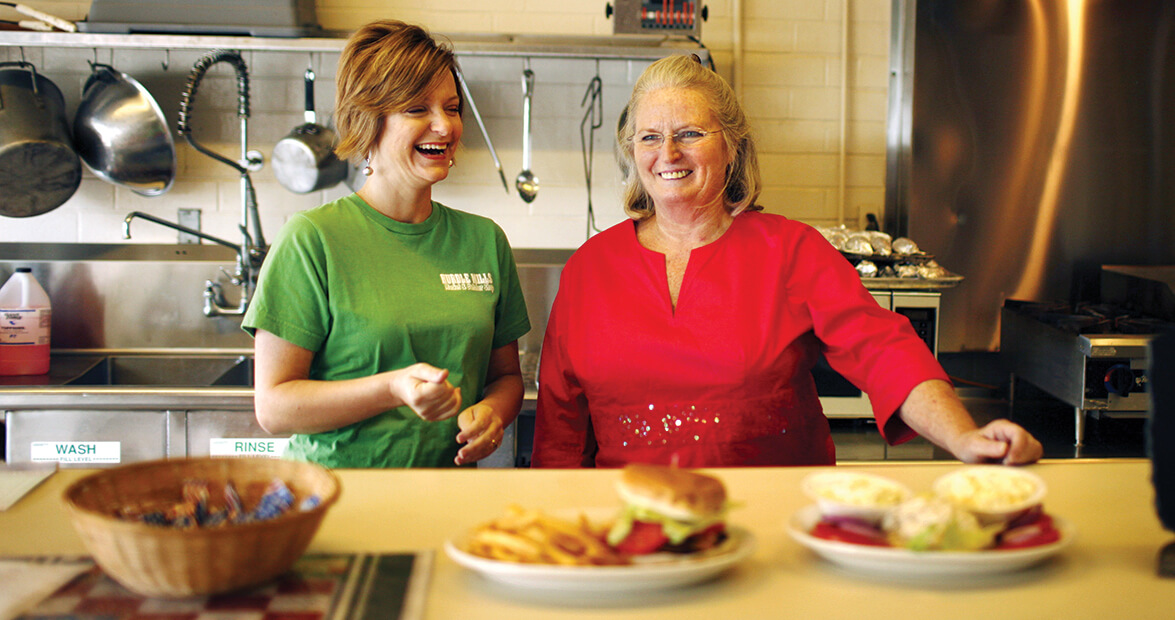 David Poindexter doesn’t stand still for long. On this day, and most days, he shuttles from the cash register to the kitchen counter to the butcher shop and then back out to the dining room. The Flat River Cafe’s front door opens, and a group of men files in. “Howdy, y’all,” the cafe owner calls out in his booming voice.

The men make their way past old black-and-white photographs of Hurdle Mills and a cheerful, hand-painted mural depicting a red mill house straddling the Flat River. Ceiling fans rotate slowly above a long and low pale-wood counter, but the group settles in the green seats of a booth. A giant flat-screen TV on the back wall streams CMT music videos.

It’s midday, and the place is jumping. Locals, taking a break from the fields or a factory, flock here for homemade Southern staples — fluffy cat-head biscuits made fresh daily, juicy cheeseburgers, and melt-in-your-mouth pies that Poindexter recalls from his grandmother’s kitchen. Hunters, easy to spot in their camouflage and orange, and travelers along N.C. Highway 157, lucky enough to pick this place for a stop, fill the rest of the seats.

In the midst of the motion, a small woman manages the action at the kitchen counter in sure, smooth movements. She’s David’s mom, Claudia. Although no longer here every day, like she was in the beginning, she’s still a fixture.

Not too far from her rests a recipe book, its laminated pages carefully assembled in a three-ring binder.

Like many of their neighbors, the Poindexters are farmers, and have been for generations. But by the late 1990s, tobacco was no longer the dependable and lucrative crop it had once been for North Carolina’s small family farms. “Farming tobacco had gone to pot, and we weren’t making enough to support two families,” Claudia says.

David, who has hunted since he was old enough to tote a rifle, formed a plan: to ease out of working tobacco with his dad, Franklin, and into his own business — a butcher shop where he would process deer and sell the homemade sausage and barbecue that he’d been making for his family for years.

He identified a perfect location: the back of a convenience store and cafe in nearby downtown Hurdle Mills, estimated population 3,600, on the banks of the Flat River in Person County. The building’s owner, Waddell Breeze, was excited to add the venture to the property.

David discovered a program to help finance construction and got busy, doing most of the work himself. “When I say he built the butcher shop, I mean he had to pour the concrete, put the freezers in, you name it,” says Angie Poindexter, David’s wife and business partner.

All was proceeding as planned — until the convenience store’s owner decided to retire. Because David knew he needed the lure of the store for the butcher shop to fly, he and Angie decided to take over the lease. He finished up the butcher shop and worked his way into the store, painting walls, restocking shelves, and generally brightening up the place.

But then, the woman who ran the grill suddenly closed it — and took her equipment with her when she left. “David called me in the middle of the night crying, saying, ‘Mom, I don’t think I can do this,’” Claudia recalls. “And I said, ‘Well, all we can do is try.’”

The overwhelming odds against them — new restaurants have a notoriously high failure rate — didn’t matter. Going back to tobacco farming wasn’t an option. So they forged ahead. “I’m telling you, my husband was fresh off the tobacco field, and I did accounting and books,” says Angie, who had an office job at the time. “We had no clue what we were doing.”

What they did have was Claudia and Franklin’s tireless support, dedicated employees — and a collection of family recipes.

“Oh, it was horrible. It was awful,” Claudia says, remembering the strain of feeling like they were in over their heads. “We didn’t know what we were doing in any of the three businesses.” Angie describes it as the beginning of “10 very crazy years.”

Replacing the restaurant equipment stands out in Claudia’s memory as a huge hurdle. “Oh my word, that equipment is so expensive; we didn’t know what we were going to do,” she says. “I think we may still be paying for some of it.”

The family may not have known much about running a restaurant — Claudia took one of the cafe’s longtime employees with her when she went to buy utensils and tools for the kitchen. But one thing Claudia does know is good food. She raised her family on recipes that her mother passed on to her. “My mother was a very good cook,” Claudia says, “and a lot of the recipes are hers — especially the pies, the chocolate, sweet potato, coconut, and egg custard.”

The pies are something special. They are made primarily by one woman, Joanne Medlin. The best sellers are sweet potato and chocolate, both topped with generous clouds of expertly browned meringue. “Joanne’s meringue doesn’t ever flop; mine flops,” Angie says.

Other standouts include the egg custard, a thick, creamy, golden-hued confection that goes down almost too easily, and a brown sugar pie, an old-fashioned Southern specialty that’s reminiscent of pecan pie without the pecans. “I won’t take the credit,” Claudia says. “Those recipes were my momma’s.”

And they have been the family’s salvation.

From day one, Claudia and Angie have followed them to the letter, turning out plate after plate of good, old-fashioned comfort food: pork chops and ribs, fried chicken, flounder, and catfish; butter beans and corn; squash and onions.

“There is nothing that comes out of a can,” Angie says with pride. “We make slaw every day. We do cream potatoes from real potatoes.”

The barbecue comes fresh from the butcher shop, the enterprise that started it all.

The Poindexters made mistakes, no doubt, as they taught themselves how to run three separate businesses. But the quality of the food at the Flat River Cafe has always been good enough for family — and good enough to build a loyal following of customers.

The regulars, many of whom have become family friends, know they’ll find tasty country cooking here, just like their mothers made. Breeze, the 92-year-old landlord, comes in almost every day for lunch. “He’s happy to see the business thriving,” Claudia says.

There’s Jamie Blaylock, a tobacco farmer who also comes in every day. And Claudia still misses Martin Brand, who, until he passed away in October, came in every day for a vegetable plate at lunchtime.

“He ate pinto beans and black-eyed peas and whatever vegetables we had, and he was just a real likable fellow,” Claudia says. “I stand here at this cash register, and it seems like it would be fitting for him to walk in. I have missed that man so much; I sure have.” She sighs.

Visiting any of the three businesses today, it’s hard to imagine what the Poindexters faced 10 years ago. The butcher shop that started it all is a clean, bright space where locals come for fresh cuts of beef and pork, and hunters get their venison prepped and packaged.

The convenience store is sunny and sweet and stocked with essentials as well as an array of local food products, such as cheese from Asheville dairies, milk from Maple View Farm, and preserves and homemade fruit butters from nearby farmers.

At the center of it all, the restaurant hums. Here, David and Angie, and often Claudia, keep things going, doing whatever needs to be done.

“You name it, and each of us does it,” Angie says, from running the register and wiping off tabletops to making coffee and serving another slice of homemade pie.