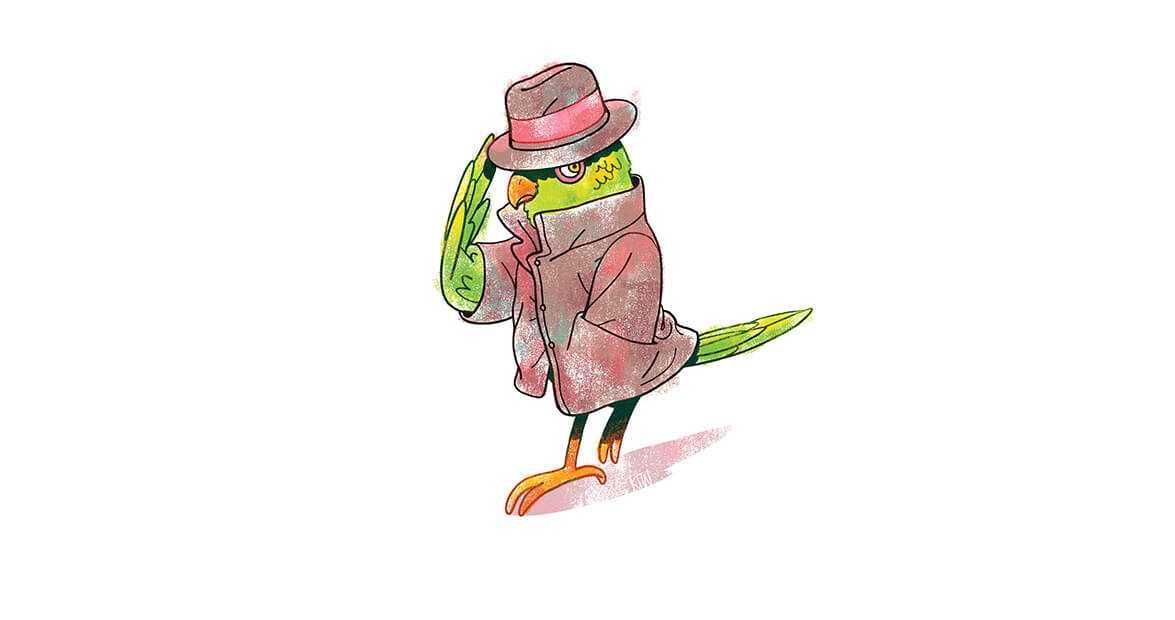 At least we didn’t pick the robin. Connecticut’s state bird is the robin. It seems like they weren’t even trying, like some legislator said, “Quick, name a bird, any bird!”

And, believe me, North Carolina’s not impressing anyone with our state bird, the cardinal, either. Seven states claim the cardinal. Don’t get me wrong, it’s a nice bird, very red. It can’t be bothered to migrate, so it hangs around North Carolina winter and summer. The cardinal has its morally approved qualities (monogamy, for instance, though the action around my bird feeder would seem to call that into question) and was the popular choice for state bird when a statewide referendum was held on March 4, 1943.

We could have gone for one of two birds named “Carolina,” the Carolina wren. Five years after we jumped on the cardinal bandwagon, South Carolina made the Carolina wren its state bird in 1948. They have put this indistinguishable, tiny, inconsequential bird on their quarter. They can have it.

I’m holding out for the Carolina Parakeet.

The only parrot native to the continental United States, known for its gorgeous neon plumage of orange, yellow, and several shades of green (the male and female equally resplendent, unlike the drab lady-cardinal), was not so loved for its loud squawk, which could be heard two miles away. Nor was it loved for its diet. As John James Audubon wrote, our parakeet “… eats or destroys almost every kind of fruit indiscriminately, and on this account is always an unwelcome visiter to the planter, the farmer, or the gardener. The stacks of grain put up in the field are resorted to by flocks of these birds, which frequently cover them so entirely, that they present to the eye the same effect as if a brilliantly coloured carpet had been thrown over them … They assail the pear and apple-trees, when the fruit is yet very small and far from being ripe, and this merely for the sake of the seeds… Do not imagine, reader, that all these outrages are borne without severe retaliation on the part of the planters.”

The Carolina Parakeet was hunted down as a pest and, once killed, its feathers were much valued by millineries. What’s left, alas, of the state’s Carolina Parakeets is likely festooning a turn-of-the-20th-century ladies hat in a great-grandmother’s attic.

The last captive male, Incas, died at the Cincinnati Zoo on February 21, 1918, a few months after Lady Jane, his mate, passed away. Incas was kept in the same aviary cage where the last passenger pigeon, Martha, had died four years earlier. (Really? Someone thought an Official Extinction Cage where bird species go to die would help matters?)

Mind you, I think using the E word is a little rash.

I think the Carolina Parakeet is just lying low.

Noel F.R. Snyder’s compendium of science and lore (The Carolina Parakeet: Glimpses of a Vanished Bird, Princeton University Press, 2004) reports that there was a reputable sighting of 80 parakeets in 1935 near the Perdido River in Alabama; unconfirmed sightings continued through the 1930s, 1940s, 1950s. They were captured and sold as pets throughout the 19th century. Might someone who lived in Cuba or Mexico have bought these parrots for a collection or a zoo?

“I suppose it is just conceivably possible it’s hanging on somewhere,” says ornithologist Ted Simons, professor of Applied Ecology at North Carolina State University. “Never say never, I guess. It’s certainly gone from the United States mainland. If it’s anywhere, it might be in the Caribbean, somewhere remote, away from scientists or bird-watchers. Living near a similar species, blending in. But, truly, this really is a long shot.”

Now, now, let’s keep on the sunny side. What about taking one of the many taxidermied museum specimens and producing a clone from the DNA?

“No extinct species has ever been brought back. And as for that stuffed bird on the shelf, you can expect that the DNA has degraded over time. Although scientists lately have figured out how to reverse that decay,” says Dr. Roland Kays of the North Carolina Museum of Natural Sciences, who famously helped find the olinguito, a brand-new mammal heretofore hiding from us humans. And gene-splicing technology has also bounded ahead. Let’s say a careful analysis of the Carolina Parakeet genome showed it shared 95 percent of its DNA with another parrot; you could splice the specific Carolina Parakeet bits into the other vital bits and, voila, de-extinction.

“But you have to bring back species that would have a chance of surviving,” Kays cautions. “The habitat issues and the nuisance to farmers wouldn’t change. I think a fine candidate for revival would be Steller’s sea cow, no longer the prey of hungry 19th-century sailors.”

We are not bringing back Steller’s sea cow — even if North Carolina declared it the State Sea Cow. We are bringing back the Carolina Parakeet. Which is likely hanging out in the Caribbean waiting to be rediscovered and ready to fly home and play with its newly cloned friends who we will assemble sometime soon in a Research Triangle Park laboratory.

Your days are numbered, cardinal! Pack your bags for Indiana or West Virginia or any of the other states you’ve enchanted with your one-note paint job, because when the Carolina Parakeet comes roaring back, you won’t any longer be the most colorful creature in the bird feeder. The groundswell for a state-bird rethink will be too overwhelming.