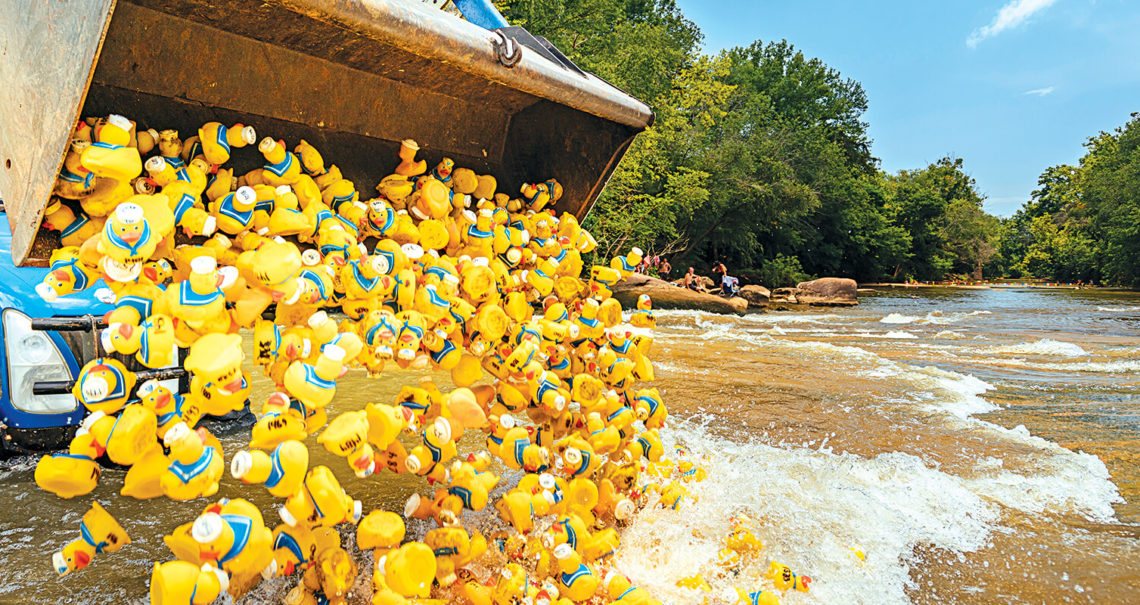 A tractor with a bucket loader inches into the South Yadkin River at the border of Davie and Rowan counties, and dumps a thousand little yellow rubber duckies into the rushing water. Spectators along the shoreline cheer as the tiny sailors hurtle down a 100-yard stretch of river, jockeying for position, navigating rocks and stray limbs, their bright eyes looking straight ahead as they bob frantically to the finish line. From beginning to end, The Great Bullhole Duck Race lasts maybe 15 minutes.

You haven’t truly experienced the thrill of competition — the grit and determination born of one worthy opponent battling another — until you’ve witnessed a rubber duckie race on a hot summer afternoon. And I say this with the full authority of a participant: I have $5 riding on Duck No. 1206. 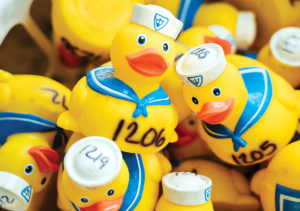 Author Jimmy Tomlin has his eyes on duck No. 1206. photograph by Adam Mowery

The duck dash, held each summer at RiverPark at Cooleemee Falls, about 20 minutes north of Salisbury, is every bit the spectacle that you’d imagine it to be. Up to 300 people, many of whom, like me, have a stake in the competition, gather at the river to watch the tiny toy birds battle, Ken-ducky Derby-style, to victory. “They cheer on those ducks as if they can actually tell which duck is theirs,” says Benita Finney, a Davie County commissioner who volunteered to coordinate the race two years ago. “They really get into it.”

On lazy summer days, the 80-acre RiverPark — referred to locally as “The Bullhole” — is an idyllic place to spend an afternoon, its swimming hole created by a 12-foot-high stone dam. The water roars as it cascades over the rocks, but it slows down and becomes shallow almost immediately, allowing swimmers and tubers to relax and enjoy the blue sky, tall oaks and poplars, plus the honking of real birds like the Canada geese that stroll the shoreline. A beach, deposited there years ago by a flood, overlooks the river, giving sunbathers a perfect vantage point from which to watch the swimmers — or, on race day, to see a flock of rubber duckies.

The Bullhole has been an oasis for the small community of Cooleemee since the 1800s, when Freemasons began holding their annual picnics there. Baptisms were performed in the river, and young lovers would frequent the area for “sparking,” or courting. Throughout the 20th century, The Bullhole remained one of the most popular old-fashioned swimming holes in the two-county region. “We came down here all the time as kids,” says John Chandler, a former Cooleemee mayor who has lived in the town all of his 67 years. “People around here love to come for the day, but we have people from all across the state and even farther who know about it.”

The Bullhole’s name comes from an old legend about a man who was crossing the shoals one day when his bull got stuck in deep water. “They never found the bull, which apparently drowned,” Chandler explains. “And ever since, people have referred to this place as The Bullhole.” 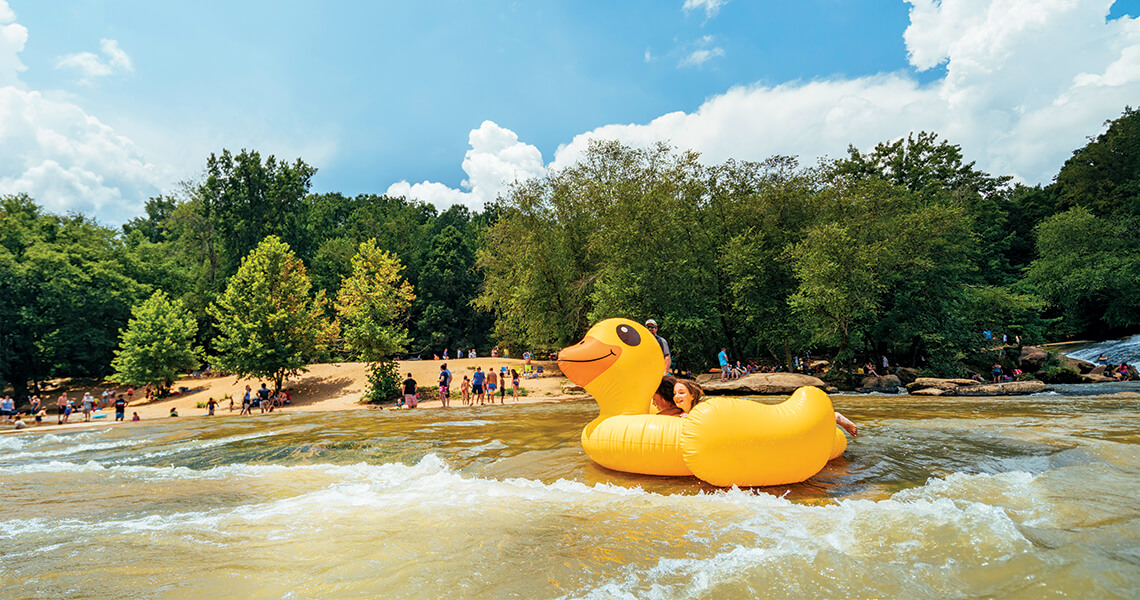 No, the giant inflatable duckie is not allowed in the race. photograph by Adam Mowery

By the ’90s, a task force was set up to preserve The Bullhole, and, in 2003, RiverPark at Cooleemee Falls opened, featuring nature trails, fishing spots, picnic tables, and restrooms. But residents insisted on keeping “The Bullhole” in the name. “Even among the locals, if you mention the RiverPark at Cooleemee Falls, they might not know what you’re talking about,” Chandler says. “But everybody has heard of The Bullhole.”

In 2010, the Town of Cooleemee launched The Great Bullhole Duck Race and Festival to help fund the park’s upkeep. The event includes food trucks, vendors, music, and hours of fun in the water. But the 15-minute duckie dash is the main attraction. “It gets bigger and better every year,” says Finney. “We have 1,500 rubber ducks, and it would be great if we could put every one of those ducks in the water. That would be our best race yet.”

And speaking of best races, I’m expecting a big win from Duckie No. 1206 as he and his fellow ducks rush toward the finish line. I’d like to think that 1206 is somewhere near the front, but the truth is, I have no idea where he is amid the yellow stream of racers. And unless he finishes first, second, or third, I’ll never know where he placed. That’s because — well, how could the organizers possibly record the race results of 1,000 rubber duckies?

Most of the spectators surrounding me are just as eager to see their duckies win. Before the racers were released, we paid $5 per duck to enter. Some folks opted for a “quack-pack” of five for $20; others went all out for the $100 “flock” of 25 ducks. At the finish line, 1206 is nowhere to be found. I later learn that the secret to winning is to adopt multiple ducks. I’d put my meager resources into just one, and he didn’t win so much as a plastic participation trophy. But as I return to my car, empty-handed, I find myself with an affirmation for my next Great Bullhole Duck Race: Better duck next year!