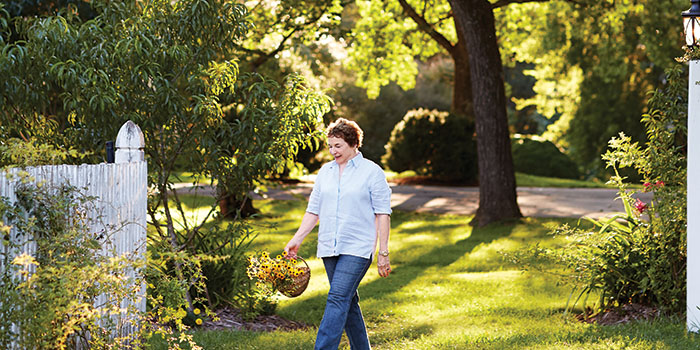 In the late 1700s, travelers doing business at the flour mill in Hillsborough had few choices if they wanted a tankard of beer or an indoor bed. They made their way through the woods to The Coach, a tavern with shared guest quarters that was one the few places that kept a candle burning for strangers.

Author Frances Mayes instantly recognized the welcoming appeal of the rambling Orange County property, now called Chatwood. The scenery is reminiscent to that of Under Magnolia, her new memoir about growing up in sweltering, small-town Fitzgerald, Georgia. The property called to her much in the same way that William Faulkner’s home in Oxford, Mississippi lured her onto its overgrown porch.

That unplanned visit to Faulkner’s Rowan Oak in 2002 started by striding past a “no trespassing” sign, jangling the locked front door, and slipping a keepsake leaf into her wallet before returning to town for a speaking engagement. It was one of a series of long-simmering events that led to her to phone her husband, poet Edward Mayes, in Italy later that night to declare that she wanted to move back to the South.

While her resolve was unshakeable, Mayes didn’t know at the time where exactly in the South they might land. She wanted a place much like her beloved Bramasole, the abandoned Tuscan villa that became the backdrop for her previous memoir, the best-selling Under the Tuscan Sun, during its restoration in the early 1990s. That meant a place in the country, ideally near water, with neighbors who both respect the history of the place and want to lead it tenderly into the future. A major airport close by would be nice, too.

A tall order, to be sure. But Mayes found it all in the artistic community of Hillsborough.

“I was walking down the road with a friend of mine who is a realtor,” recalls Mayes from the kitchen of her hand-hewn 1806 home, which is listed on the National Register of Historic Places. “I just got a feeling about it. The grounds were overgrown, but you could tell it was just a beautiful place.

“It seemed like a Southern paradise, without the baggage of the Civil War. It was hard scrabble, but no one was reading Greek poetry on the front porch,” she adds with a wry laugh, referencing a grandiose pastime not uncommon in her hometown. “I told her right then, without ever having stepped inside, that if it ever went on sale I would buy it.”

And that’s exactly what she did. The Mayeses bought the property around 2010, intending to build a new home across the road while her daughter took up residence in Chatwood. Two years ago, after she’d left to live elsewhere, Hillsborough’s then-newest literary couple moved in.

Mayes was familiar with the area, especially Chapel Hill, which she started visiting in the 1960s as a party-loving student at Randolph-Macon Woman’s College in Virginia. She has lifelong friends close by and, at one point, a contract to oversee a line of Tuscan-inspired furniture in High Point.

They now divide their time between Bramasole, where they produce peppery artisan olive oil the color of crushed emeralds, and the 30 acres that surround Chatwood and stretch to the banks of the Eno River. 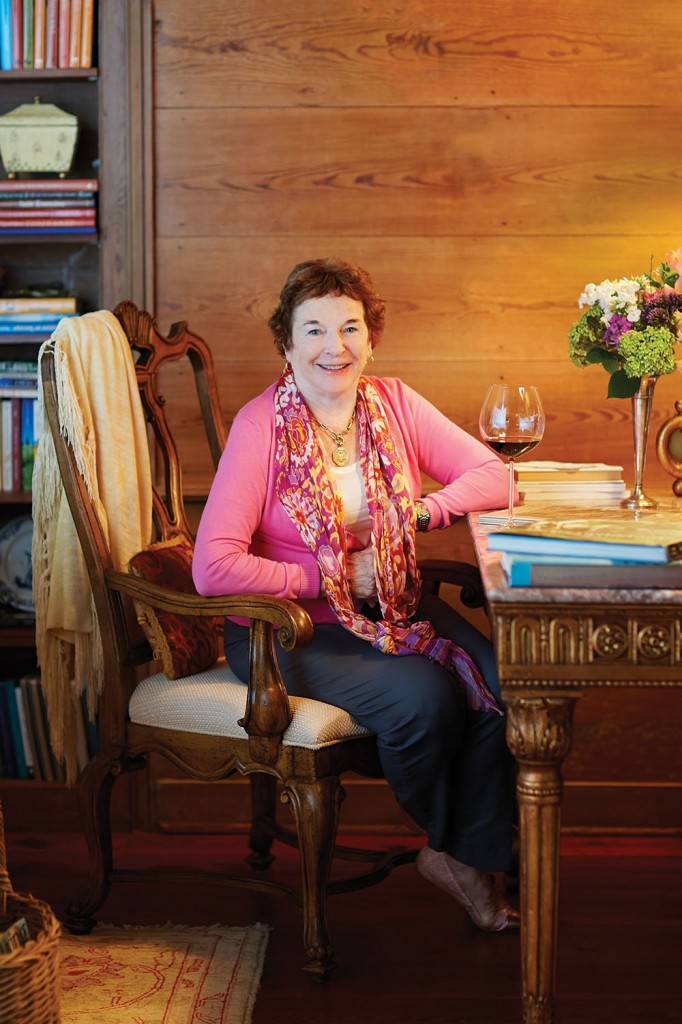 Mayes has enjoyed learning about her North Carolina home’s colorful past, which includes the addition of a larger and even older house that was moved from nearby Cedar Ridge in the 1930s. Steep, narrow stairs link the structures into one grand haven with enchanting views of elegantly manicured gardens. The upstairs office, where she writes, was once filled with tiny desks and used as a classroom for local children.

On the front porch, there are two doors with the original keyholes, just as there were in the early 1800s. The door on the right led to the private residence while the one on the left opened into the tavern room of The Coach. With its large fireplace and broad planks of heart pine, the space is now dubbed “the little living room.”

“We love to come in here in the winter, build a big fire, and enjoy our dinner,” says Mayes, who has filled her inviting home with antiques and art collected from world travels. The matching space on the other side is their dining room, which is anchored by a massive Tuscan breakfront crafted in the same era as their home.

The dining room feeds guests into the “large” living room, a book-filled space where the long, polished floor boards are 18 inches wide. The dark wood is brightened by an inviting sun porch that overlooks a fragrant garden of heirloom roses.

“It’s the best view in the house, and I just love those old roses,” Mayes says, gazing through windows that carry the eye across acres of sunny meadow. “It will be even better when this becomes the kitchen.”

Mayes spent months on plans for a major renovation to the home, which may begin this fall depending on the progress of an even larger, ongoing overhaul of Bramasole. The sunroom will bump out into the garden to become a large kitchen with glass conservation room, while the quirky kitchen will be remade into a new master bedroom suite. The project was carefully designed to maintain the historic integrity of the property.

“I hate additions that look like they were slapped on,” says Mayes, who has gained approval of historic preservation committees. “The original kitchen likely was a sort of lean-to, and this kitchen always makes me feel like I’m in the hallway. It bothers me, architecturally.”

Now that the grind of planning is done, she can focus on the joy of improving Chatwood.

“Who wouldn’t be happy here?” she muses, considering the last bit of foam from her latte clinging to her coffee cup.

Mayes is charmed by the sense of community in Hillsborough, which she describes in the closing chapter of Under Magnolia.

“People really know how to have fun here,” she says brightly. “There are no stuffy old dinner parties, which is how you socialize in most places.”

“Sometimes there are masked balls and gambling evenings,” she adds, her eyes twinkling with mischief and merriment. “Except for Tuscany, it’s more fun here than anywhere I’ve ever lived.”

Jill Warren Lucas of Raleigh is a regular contributor to Our State. Find more of her archived stories here.