The old man was not formally educated, but 10-year-old Warren Wheeler hung on to his every word during those summer days in the bright glare of sunshine on rippling water. The old man was a waterman, and young Wheeler his student. The child had learned plenty from his own highly educated father, the president of the Mechanics and Farmers Bank of Durham, who would later help draft the Civil Rights Act of 1964. Wheeler also learned a lot from his mother, a Howard University and Hampton Institute graduate who long served as the head librarian at what was then known as the Durham Colored Library. But this old fisherman, Charlie Harris, taught Wheeler things that his parents couldn’t.

Wheeler once dreamed of sailing boats — now, he dreamed of piloting airplanes in the wild blue yonder.

Harris regularly invited the kid on excursions into the open water, where Wheeler learned what freedom felt like. But freedom can be fleeting. The Coast Guard eventually told the old waterman that he had to be certified before he could carry people out in a boat. And being certified meant passing a test. “Well, he couldn’t do that because he couldn’t even read or write,” says Wheeler, who, many years later, would found the nation’s first Black-owned air carrier, Wheeler Airlines. “But there was nobody I’d rather be out in the water with than that man,” Wheeler continues, “because he knew more about the water than anybody. He was educated in terms of operating a boat.”

One day, Harris let Wheeler take the steering wheel. When Wheeler turned too sharply, cables got wrapped around the wheel, and the boat went into a spin. The fisherman remained calm. He “quietly, calmly came up, took my hands off the steering wheel, and straightened everything out,” Wheeler says. “And he looked at me, and he says, ‘Son, don’t mess with what you don’t understand.’” Wheeler, now 77, laughs as he recalls the valuable lesson. “If that’s not an educated man, we don’t understand the meaning of the word education.” 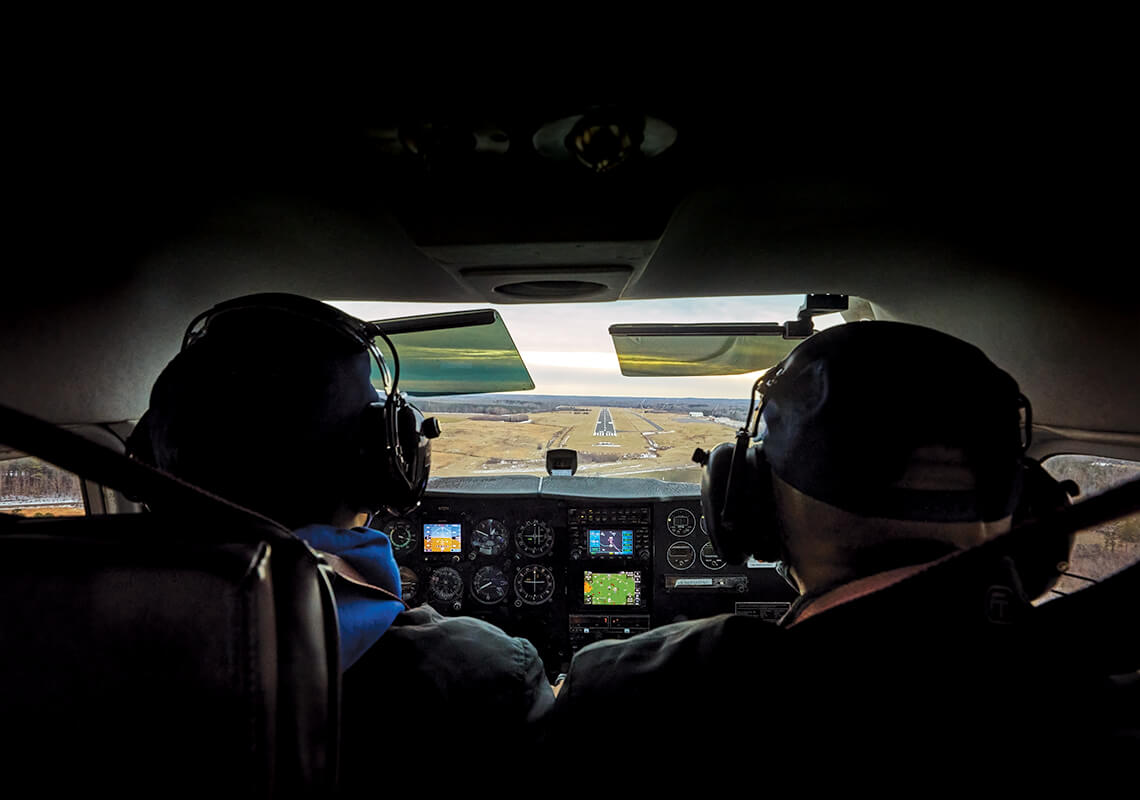 Wheeler was 3 years old the first time his family packed up their car and drove from their home in Durham to the peaceful Robert R. Moton House in Gloucester, Virginia. It was the earliest of many annual family trips to the stately brick mansion that butts up against the blue-gray waters of the York River. Wheeler grew up longing for those summer escapes, where he came into contact not just with modest fishermen like Harris, but also with prominent Black leaders who were ushering in a new era of freedom in the 1950s.

Inside the Moton House, legal minds hashed out strategies for cases that were part of the Brown v Board of Education ruling, which rendered school segregation illegal in 1954. And it’s said that the Rev. Dr. Martin Luther King Jr. put the finishing touches on his 1963 “I Have a Dream” speech while relaxing on a stone bench under a tree outside. The Moton House was a think tank and a vacation spot for wealthy and influential African American movers and shakers to take their families during a time when Black people of all social and economic strata were barred from white resorts and conference centers.

For young Wheeler, though, freedom wasn’t just the new advances in civil rights that he was hearing about; it also meant looking out over the sprawling York River, or up into the vastness of a cloudless Southern sky. When he returned home to Durham, Wheeler would think back on the conversations that he’d heard around the Moton House table — like the time the president of Tuskegee Institute described what it felt like to fly an airplane upside down. “I would be like, What is he talking about?” Wheeler says incredulously. “How do you get an airplane to fly upside down? Black people didn’t even fly in little airplanes back then.”

The image stuck with Wheeler, and when his older sister, Julia, who was taking flying lessons, was invited by an aircraft salesman for a short trip in a little four-seat Cessna 172, her younger brother tagged along. Before then, Wheeler had dreamed of sailing boats in the ocean — now, he dreamed of piloting airplanes in the wild blue yonder. “After that flight,” he says, “I was hooked on airplanes.”

Wheeler was just 16 when he earned his private pilot’s license. Two years later, he enrolled at the Agricultural and Technical College of North Carolina (now NC A&T State University), but soon grew bored with his classes and dropped out to study aviation at the American Flyers School in Ardmore, Oklahoma. At 19, after graduating from the AFS program and earning his commercial pilot’s license, Wheeler set up shop in Chapel Hill, where he began teaching white college students from the University of North Carolina how to fly.

In the early 1960s, getting work as a pilot for a major airline was next to impossible for a young Black man. Wheeler applied for jobs, but no one was calling back. Meanwhile, he earned his flying hours by accompanying a pilot who flew charters and by continuing to teach flying lessons. He applied for a job at Piedmont Airlines and didn’t hear back from the company after the interview. Luckily, his father was friends with Gov. Terry Sanford, who had flown on some of the charter trips that Wheeler copiloted. Sanford knew Piedmont Airlines’ president, Tom Davis, and made a call on Wheeler’s behalf. “From what I was able to put together, Tom Davis called down to the people who did the interview with me, and he asked about me,” Wheeler says. “The interviewer said, ‘Yes, it seems like he might be qualified.’ And Davis said, ‘Seems like he might be? Well, if he’s qualified, hire him.’ ” 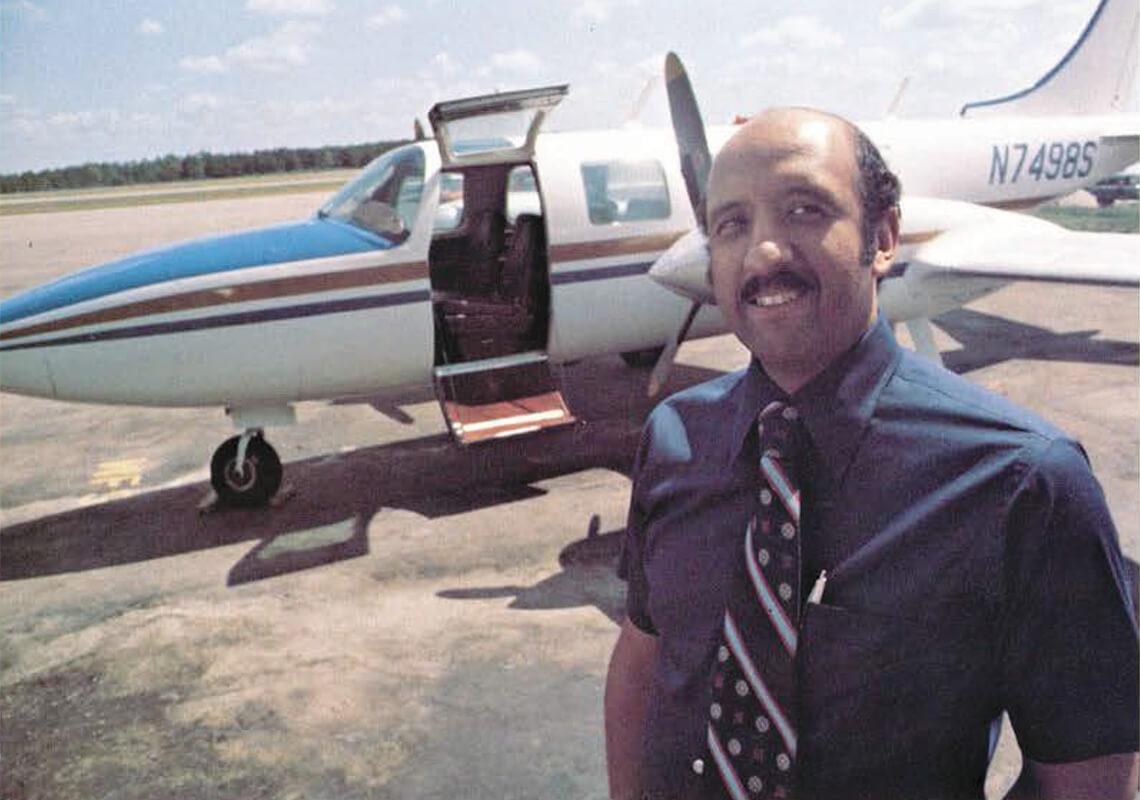 When Wheeler wasn’t piloting for Piedmont Airlines he flew his own fleet of aircraft for Wheeler Airlines seen in this photo from 1977. photograph by WELLS FARGO CORPORATE ARCHIVES

In 1966, Wheeler became Piedmont’s first Black pilot and, at 22, one of its youngest. He continued his flight school in Chapel Hill, and in 1969, while still flying for Piedmont, he launched Wheeler Flying Service, a cargo and courier operation, and eventually its commuter and charter wing, Wheeler Airlines. His boss was aware of the side job. “Tom Davis knew about it,” Wheeler says. “I didn’t say he endorsed it, but he didn’t stop me.”

As Wheeler’s little airline grew, he was burning the candle at both ends, piloting for Piedmont, heading his own company, and encouraging his employees to all chip in on menial duties like loading and unloading luggage, answering passengers’ questions, and repairing the aircraft. By 1976, the company that Wheeler had started with just two Piper six-passenger planes and one employee — himself — had a fleet of 11 planes and 27 employees. He’d expanded his reach across the state, from Asheville to Greenville, and his revenues averaged more than $20,000 a month. Most of his passengers were white businessmen, many of whom worked for the Durham-based Burroughs Wellcome pharmaceutical company and would travel back and forth between Durham and the company’s factory in Greenville. The rest of his business consisted of cargo and courier contracts with companies ranging from banks to the U.S. Postal Service.

Wheeler Airlines remained the only minority-owned airline in the nation until the early ’80s, and the company did not elude the specter of racism. When more and more small airlines popped up to compete with Wheeler in the commuter business, one of them, Sunbird Airlines out of Lincoln County, didn’t hesitate to use race against Wheeler. Before the 1990s, there was no online booking, so commuters still relied on travel agencies to schedule their flights. “So what the guy that owned Sunbird would do is, he would go into the travel agencies — and we’d be flying some of the same routes between Charlotte and Raleigh-Durham and places like that — and the travel agent would say, ‘Well, we put some people on Wheeler Airlines last weekend.’ And he would say, ‘You do realize that Wheeler Airlines is owned by a Black person, don’t you?’ And that’s all it would take. Next time, those people would be on Sunbird.”

Wheeler’s run extended through the 1980s, but a bad business decision and the loss of a key part of his courier service — hauling canceled paper checks from banks to processing centers — finally did him in by the early ’90s. Hauling checks, Wheeler says, “was the backbone of our business. And that business doesn’t exist anymore.” Wheeler also was talked into buying a 35-seat turboprop airplane that he didn’t really need. “It was a mistake. And it took us down,” he says. “And we didn’t have funding to correct it. So that was the end of it.”

Shutting down the airline was a hard decision for Wheeler, but it turned out to be fortuitous “I don’t know what my life would have been like if it hadn’t happened, because it got me out of the business,” he says. “I could breathe. Now I can help kids get into it, and that’s much more of a contribution.” 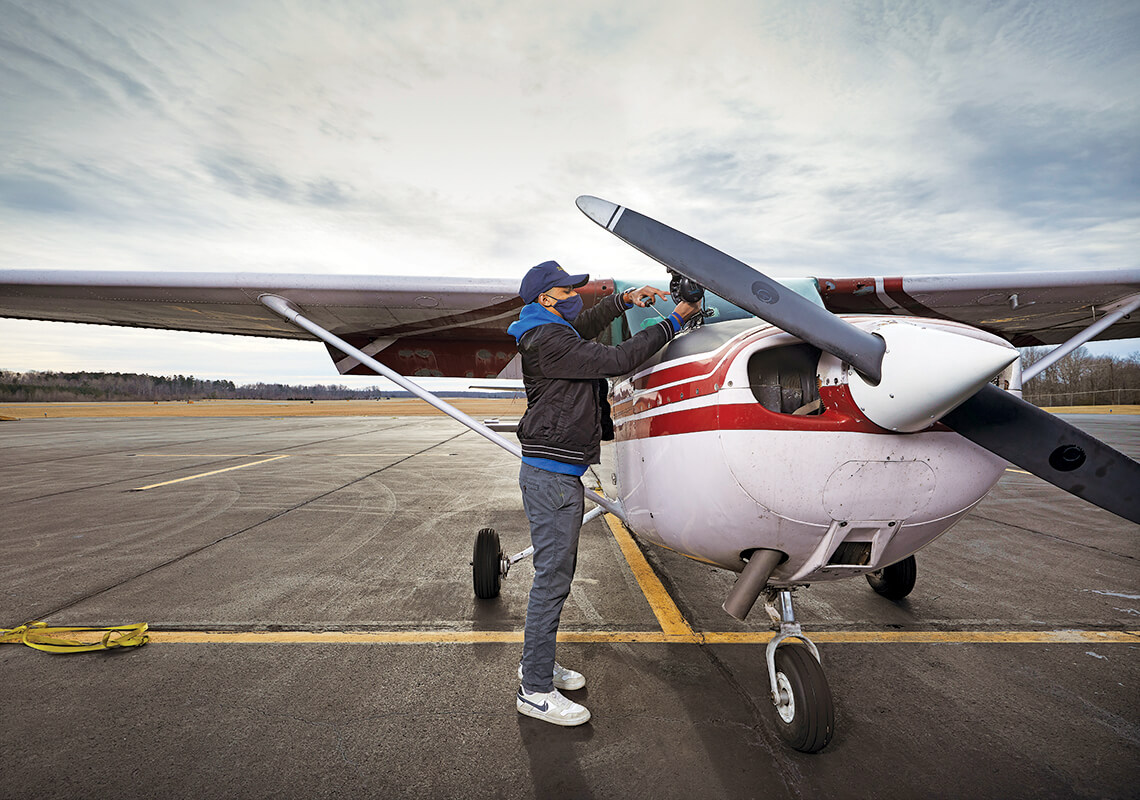 Ellis Woodyard was one of Warren’s students, and today he’s flying solo — and studying flight education at Hampton University. photograph by Alex Boerner

Part of Wheeler’s mission all along was to train and employ more Black pilots. By 1978, seven of his 14 pilots were Black, and two copilots were women, one of whom was a Black woman. Breaking color and gender barriers and encouraging other aspiring pilots of color is “Warren’s platform for history,” says Anita Neville, who works for Wheeler’s current nonprofit, Airolina Young Aviators of Durham. Airolina is an aviation STEM (science, technology, engineering, and math) program that’s available to all teens, but its focus is on underserved Black and Hispanic students. “He’s retired now from any commercial work,” Neville says, “but his goal — and it’s our model at Airolina — is to pass it on.”

During the height of his career as president of Wheeler Airlines, Wheeler kept a 22-foot sailboat in Norfolk, where he’d escape to on free days to decompress and reflect on his childhood experiences boating and fishing with his mentor, Charlie Harris. In more recent years, Wheeler has kept a 32-foot sailboat docked in the Caribbean, where he’s continued to seek the freedom that he felt while gliding across the sun-speckled waters of the Chesapeake Bay. For a while, Wheeler ran an island-hopping airline in the British Virgin Islands — carting tourists to Tortola, Virgin Gorda, and Anegada from Saint Thomas and San Juan — but staffing problems brought that business to a standstill.

Wheeler misses it, but what he misses most of all is his boat. “I still love boats,” he says. “I like airplanes, too, but I can keep and operate a boat for a lot cheaper than I can an airplane. And in some ways, there’s much more freedom involved. There’s nothing like sitting on an island. Up here [in North Carolina], you haven’t seen the sky like you see the sky down there. There are no streetlights, and when you’re sitting on a boat at 11 o’clock at night, all you can see are stars.” His voice softens to a near-whisper. “There’s nothing to stop or obstruct your view. It’s like looking through a telescope — but you’re on a boat.”

It’s all the same to Wheeler. Whether he’s sailing across the water or soaring 20,000 feet in the air, the experience — being alone, surrounded by nothing but deep, deep blue — is pure, and he’s free.