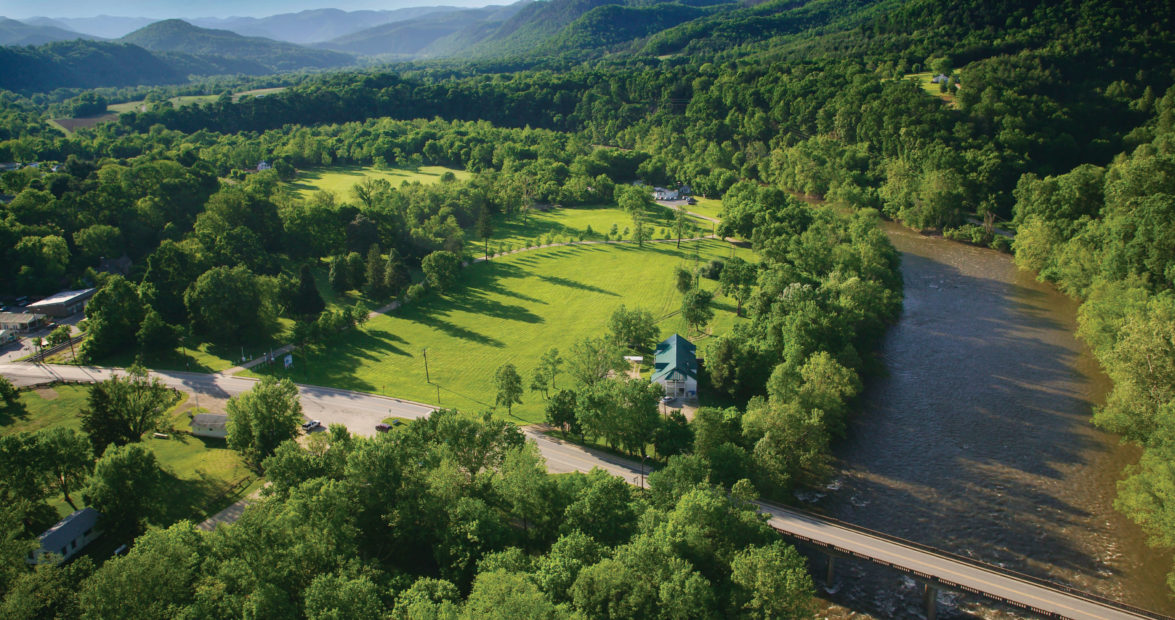 Longtime paddler Rod Baird relishes wrestling the French Broad River after heavy rain, with waves up to eight feet high. His heartbeat quickens with the current. He has to muscle his maneuvers carefully in his 28-pound kayak. As he runs the frothy rapids in Madison County, the sycamores and river birches become a blur.

“You’ve got to make the boat go where you want it to go because the river has a much stronger mind of its own,” Baird says.

People and rivers have always wrestled, retreated, and ultimately forged relationships, uneasy and irresistible at once. At times defiled by human disregard and rescued by conservationists, the French Broad now is both revived and at renewed risk. Baird sees the river from both perspectives. At his first river cleanup in the late 1970s in Asheville, he pulled parts of butchered cattle from the flowing waters. “People didn’t view the French Broad as anything other than a cesspool. Nobody wanted to be on it. You could see a lot of trash. It didn’t smell pleasant,” says Baird of Asheville. “People who fished the French Broad were considered a little off.”

With improved water quality in the past 30 years, the number of fishers and paddlers has increased significantly. But Baird also worries about the housing developments growing up to the river’s edge.

To him, the French Broad defines the region.

“The sense of place in western North Carolina is mountains and rivers,” he says. “The French Broad created this place to begin with, and it’s a huge resource that can be a focus for the future of the area and a real economic and recreational asset.”

The history of the French Broad in western North Carolina chronicles the waterway as industrial magnet and industrial dump, a route for trade and tourists, a home for rare aquatic species, and haven for generations of fishers, paddlers, and swimmers. Although the French Broad is giving, it can be vengeful, transforming during floods into a muddy monster. Then the river’s fury reminds humans who rules.

Its reign has been long. As one of the world’s oldest rivers, the French Broad, tranquil or feisty, is nothing if not resilient. Surrounded by the Appalachians, the waterway runs for 218 miles from its headwaters at Rosman in Transylvania County to where it joins the Holston River to form the Tennessee near Knoxville, Tennessee, picking up many tributaries on the journey. In its roughly 115-mile channel through North Carolina, the French Broad meanders calmly through farmland in Transylvania and Henderson counties; widens around Asheville by the Biltmore Estate, North Carolina Arboretum, and just west of downtown; and streams into Marshall and Hot Springs in Madison County, where it picks up steam as whitewater before broadening into Tennessee.

Baird passes some of the French Broad’s ghosts on his paddling trips: remnants of mills, dams, bridges, and stairs. “In that sense, it’s a used river,” he says. “I’m impressed that it has recovered. I’ve seen the French Broad go from a sewer to a wild place I can connect with, where many people use it and embrace it with love.”

The love is spreading.

An artery through a changing mountain landscape, the river’s current pulses with opportunity. Recreational, residential, and commercial projects are planned on and near the waterway; riverfront property is being preserved for non-development uses; and farmers and others are adopting practices to lessen their negative impact on the French Broad. In Asheville, where much of the waterway runs along a former industrial corridor, officials call the river the city’s next frontier.

Asheville’s River Arts District west of downtown, where artists and others work and live along the French Broad, is a draw for development and tourism. And with each man-made improvement, the river’s persona changes.

Car parts, appliances, and dead animals used to be common contaminants; those items are rarely retrieved from the river today. A more likely sight is people enjoying the river and the venues lining its banks.

“Today when I go to the French Broad, it’s a melting pot. It’s black, white, Hispanic. It’s gay and straight,” says Karen Cragnolin, executive director of RiverLink, a nonprofit in Asheville that promotes the environmental and economic revitalization of the French Broad watershed. “It’s the gamut of humanity that has melted there. The river is a place where we can all meet.”

Brittany Whitmire is her family’s fifth generation to develop a relationship with the river at Whitmire Century Family Farm in Transylvania County. About two miles of their farmland fronts the river. She and her husband, Andy VonCanon, raise beef cattle, chickens, and other products at their BusyBee Farm, beside the farm where she grew up.

Rains from hurricanes Frances and Ivan in 2004 sent the French Broad raging over Whitmire’s pastureland. Still, she considers the river a friend. From her home, Whitmire can see the waterway, which during floods resembles an ocean and even attracts seagulls.

“On cool mornings, you’ll have this big, white rush of fog that’s coming off the river and follows the river as it winds,” she says. “It’s like this comforting neighbor I’ve known all my life that surrounds our farm.”

From the flat, serene stretches in Transylvania to the untamed whitewater in Madison, the French Broad is holding its ground.

“I’m not sure all rivers can come back from the dead,” says Baird, 63, president of a company that manages medical practices. But the French Broad, he notes, is a survivor. And with it live the great blue herons and ospreys, the beavers, muskrats, otters, and wild turkeys that roam the river, the raccoons, foxes, and deer that claim the trails worn over time.

Sid Cullipher has paddled, fished, and swum in the French Broad for 20 years. He appreciates the waterway’s unique features: its age and northward flow, its crossing of the Eastern Continental Divide on its way to the Gulf of Mexico rather than the Atlantic Ocean, the destination of most North Carolina rivers. “It’s an unusual river. It takes a different route,” he says.

Evolving and enduring, the French Broad courses in the lifeblood of its communities and the people who swim, paddle, fish, and walk along its banks.

Cullipher has a hard time narrowing down his favorite time to be on the French Broad. He likes the higher flow of early spring; summer’s swimming holes and canopy of oaks, maples, and willows; and the water’s autumn hues, as if it’s been stained by fallen leaves. Whatever the season, he and others blend the human pace with the river’s cadences.

“The French Broad for me is just incredibly calming,” Cullipher says.

It’s a placid place for a wandering mind. He guides his red canoe, floating with the current, the river and its rider at peace.

Jess Clarke is a freelance writer and editor based in Asheville.