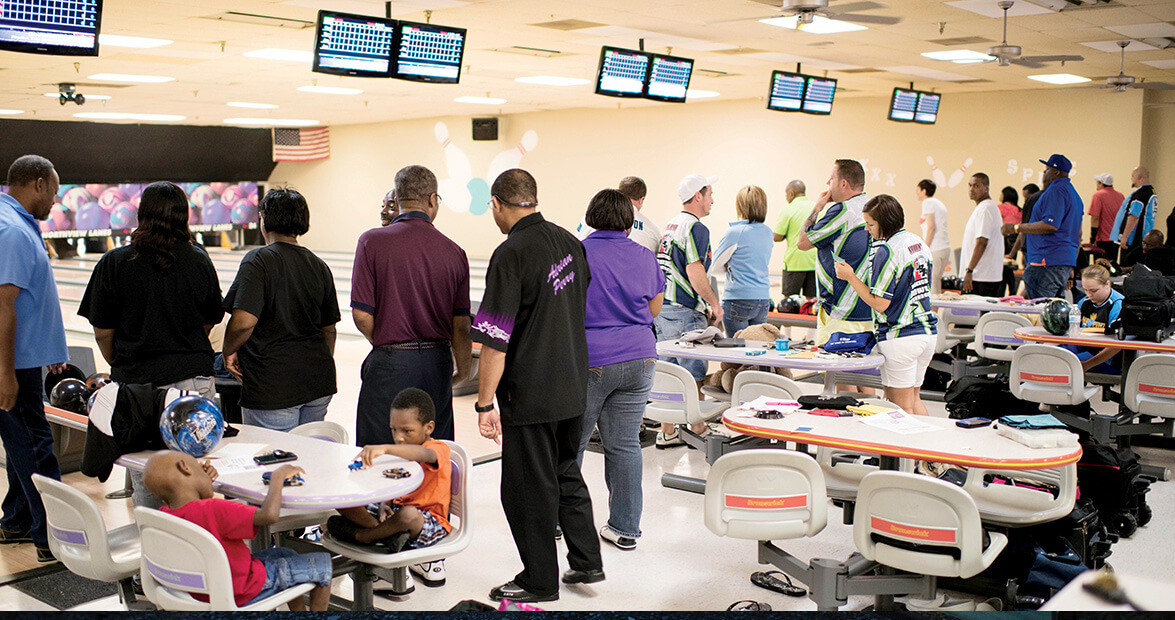 She’s let go. It’s out of her hands now. Margaret Olney is powerless. She impulsively slides her right foot to her left, as if in a dance move. Her upper body leans left, her neck tilts left, her will silently shouts left, left, left.

But there is no supernatural link between bowler and ball, no invisible hand willing it down the lane. The object of her affection, which she keeps shinier than a fender in a classic car show, keeps veering to the right.

Olney can only watch helplessly as her swirl of crimson, silver, and black levels only half of her target. And there it is, that unmistakable echo of bowling ball bashing bowling pins. It’s a hollow-like sound filled with familiarity, a sound as unmistakable as the clink of a horseshoe or the thwack of a bat. A satisfying sound. Here at North View Lanes in Fayetteville, it’s a continuous soundtrack of ball versus tenpins.

The ball, one of eight Olney owns, is back in her hands now. She knows what needs to be done. She stands erect, face stern, ball upraised, and like a predator pouncing on her prey, she lunges across the approach surface and lets loose with her 14 pounds of rolling power. The ball, a thing of beauty, appears to float more than roll down the 60-foot aisle. At more than 15 miles an hour, it crashes into the remaining pins, setting off a contained explosion of white plastic.

She spins around and gives a look that says, Now that’s more like it. But this is just the warm-up; nobody’s being judged or scored. This is the time to get the arms and legs limbered up, time to get the mind focused, time to get into the swing.

Tonight Olney, 67, is on a team with three other bowlers — a woman and two men, all at least 20 years younger — who know her as Miss Margaret. They call themselves Will Strike If Provoked. They’re among 16 teams in this 10-week summer league, teams with names like Fire-N-Ice, King Pinz, and Rage. Olney started bowling in 1978, back when Howard and Marion were bowling on “Happy Days,” and back when she was in Germany with her husband, Jerry, who was stationed there for the Army. “We took it up as just something to do,” she says, recalling the bouts of boredom she had in a foreign place. “I got into it, and I can’t let it go.”

She bowls in three leagues during the fall, two during the summer. She’s a league secretary, too. And she’s on the Board of Directors for the Fayetteville chapter of the United States Bowling Congress. “It’s in my blood,” she says.

Olney is a style-conscious woman. She wears long bangs and looping curls and Gucci glasses. The air around her is redolent with Victoria’s Secret perfume. I quiz her about the highest score she’s ever bowled. It’s 275; a perfect score is 300. “I haven’t gotten there yet. I keep trying. It’s coming,” she says. “I’m gonna get that 300.”

Watching her fluid movement — how she steps into the approach, how she brings the ball back and swings it forward, how she raises her right hand in the air with the grace of a gymnast — you know she will get that 300. Someday. There is such a thing as the invisible hand of fate.

I’m not much of a bowler myself. Let’s just say that I’m coordination-challenged. I still see myself some time ago as a 30-year-old stepping too far into the approach, over the foul line, and onto the very well-oiled lane. I slipped, bruising both pride and posterior, and have heretofore avoided the sport.

My own hands-on experience notwithstanding, I have always seen bowling through the sheen of nostalgia and late-20th-century pop culture. I can still see my grandparents in the 1970s in a league of their own — he with the black, wavy hair; she with the hairsprayed curls. I see all the bowling scenes from The Big Lebowski; I see Laverne and Shirley in their bowling shirts; I see Fred Flintstone, misshapen stone ball in hand, tiptoeing on his approach.

There are the bowling alleys of my imagination, and there is the bowling alley where I sit now. No guys with greased pompadours and untucked bowling shirts here. Instead there are young men with high-and-tights from Fort Bragg; middle-aged men just out of the office or off the job site; a 20-something mom and her two small kids eating a dinner of chicken fingers from the snack bar.

I see mothers and grown sons, boyfriends and girlfriends, husbands and wives, some of whom walked down the aisle after falling in love at the alley. “A lot of relationships have been built through bowling; I’ve witnessed it over the years,” says Kim Breeden, one of the leaders of this summer bowling league. “It allows them to cut up and have a good time together.” In fact, each team on the league is required to have two men and two women, an arrangement conducive for couples — and for matchmaking.

Just ask Deidra Hadley, 42, who met her husband, Kendrick, at B & B Lanes in Fayetteville five years ago. “We just got put on the same team and we just formed a friendship, and the next thing you know we were dating, and hey!” she says in a hubba-hubba tone of voice, “we fell in love and got married.”

What bowling hath brought together, let no fierce competitiveness put asunder. They are a team, partners in life as they are on the lanes. She and Kendrick have traveled to tournaments throughout the Southeast and as far away as Michigan. She says bowling is the perfect complement to love and marriage. “Oh yes, most definitely, because we travel out of town a lot to bowl.”

There is, after all, the romance of the road. A man and woman brought together in matrimony, sharing the same passion, traveling to exciting places like Detroit and working toward a common goal — a perfect 300 — is the image of love and commitment.

Two bowlers in love often beget little bowlers who join youth leagues and after-school programs and spend summer vacations working on their arm swings. “I’ve been bowling since I was 4,” says 31-year-old Mitch McCormick, who at 6-foot-5 and with a voice as deep as he is tall, commands respect among fellow bowlers. He now has his own boys, 5-year-old twins and a 3-year-old, bowling, too.

A sport borne of youthful amusement can carry well into old age. I’m reading a newspaper article Olney has in her scrapbook about Lillian Haynes, whose name is spoken with deference among longtime bowlers in Fayetteville and across North Carolina. She died in June 2012 at the age of 80. An Army veteran, she bowled for 53 years at B & B Lanes. She was the only bowler twice awarded “Bowler of the Year” for the Fayetteville chapter of the U.S. Bowling Congress. She was inducted into the Hall of Fame for the statewide chapter in 2009. “She was just a good bowler and loved sponsoring it,” Olney remembers. “It’s a good thing for a family. It’s just a good sport for the family that all of us can be involved in.”

It’s after 11 p.m. at B & B Lanes. I’m next to a group of guys in lanes 19 and 20 with sinewy arms and a certain nonchalance — you might say a swagger — as they knock down strike after strike.

Undeterred, I slip on my size 11 Dexters and seek out the right fit for my ring finger, middle finger, and thumb. Too bad the ball is the color of lime juice. Now here’s my moment of truth. I place my 14 pounds of lime juice beneath my eyes, glaring at the pins 20 or so yards away, then I step-step-step and let go.

The ball pounds the wood something fierce. My upper body cranes left, convinced that physical contortion can somehow put the ball on the desired trajectory. It’s not a bad throw; I manage to take out seven pins. The monitor displays the ball’s speed: 15.39 miles an hour. In my next throw, I level the remaining three pins. Spare!

Later, when I make my first strike, I’m compelled to dance a jig on the hardwood, but I tell myself to stay cool, make it look as routine as lacing up one’s bowling shoes. And then something happens that astonishes me: when hitting another strike, a 20-ish man walks over to ask about my “technique.”

“How do you get a strike?” he sincerely inquires. “Is it the way you flip your wrist?”

I consider this for a moment and deliver the sagest advice I can muster. “You have to be at one with the ball,” I lie. I go on about focus and rhythm and synergy and the importance of being earnest and how practice makes perfect before fessing up that I don’t know what I’m talking about. I tell him I’m a beginner myself and that he just happened to catch me in a fortuitous moment.

Overall I’m pleased with my five games. My highest score is 121. In lanes 19 and 20, the cool guys keep the balls rolling and the pins falling. They’re Army guys who for months have made bowling a Friday night ritual. “We come out here and just kind of bond and hang out,” says Sgt. First Class Chris Thompson, 41. “I am what they call the old guy.”

He’s a family guy, too. Like me. I feel more at ease, less self-conscious. “There are so many different people who come here on weekends,” he goes on. “You’ll find kids here at 1 in the morning and stuff. I’ve had my daughters out here and nobody bothers them.”

Nobody bothers me, either. No disapproving glances, no fun-poking at my gutter balls (of which there are many) — only a young man innocently wondering how I make a single strike look so easy.

It’s game on at North View Lanes. Practice is over. They’re limbered up and keeping score. Olney has yet to tear open the bag of peanut M&Ms on the table. “It gives me energy,” she says. “When I’m not playing so good, I need my M&Ms.”

It’s her turn; the M&Ms remain unopened for at least one more play. Sixty feet away, the 10 pins, each 15 inches tall and weighing less than a hammer, dare her to hit them with her best shot. And she does. All 10 of them fall. Strike!

Olney twirls around, smiles, does a little handclap, and gives one of her teammates a fist bump. I watch as she clutches her ball again. She’s in control, summoning her decades of experience into this one moment. She fixes her eyes on the seven target arrows embedded in the lane. A second ticks by, then another, then another. And then she takes her first step, then another, then another. She launches into her backswing before propelling the ball forward.

And then she lets go.