Jamie Wade rings up a scratch-made biscuit with buttermilk-fried chicken and Cajun-spiced honey for a customer at the cash register. She then swings around to the drive-through window to deliver a Bowl of Goodness: deep-fried stone-ground grit cakes with homemade breakfast sausage, eggs, cheese, pico de gallo, and a spicy sour cream. During busy mornings and afternoons at Sand Hill Kitchen, she works elbow to elbow with four of her employees in the narrow, 500-square-foot space.

Located inside a BP gas station at the edge of Asheville, Sand Hill Kitchen’s small counter is steps away from the usual packaged snacks and soft drinks. The smell of fried chicken wafts through the air, tantalizing customers stopping to refuel outside.

When Wade started looking for a place to open a restaurant, she noticed this unlikely space not far from her home in Candler. Traffic from the Wicked Weed Brewing production facility and five or six nearby schools meant a steady stream of customers for the gas station. Wade saw the potential, and in 2017, she opened Sand Hill Kitchen, her first restaurant. “Living in this neighborhood, I knew there was a strong need for some good food,” she says. “There’s so much going on in this area. I thought that being on the corner would be an ideal location.”

Wade has always worked in food service. She started in high school at a Dairy Queen in Tucson, Arizona, and since the late 1980s, she’s held positions ranging from prep cook to executive chef. “I really gained the knowledge and desire to move forward,” she says.

In New Orleans, she served as a line cook at the landmark Commander’s Palace restaurant. When she moved to the Outer Banks in the early 2000s, she worked at The Blue Point in Duck and later as a private chef for vacationers on Hatteras. She moved to western North Carolina to be close to her retired parents.

At Sand Hill Kitchen, some of Wade’s most popular menu items and daily specials are influenced by her grandmothers. On a shelf in her living room, she keeps a book of recipes, some handwritten, that her mom put together. The floral photo album features sections for sweet, savory, and party dishes. “I reference that cookbook a lot,” Wade says. She uses her paternal grandmother’s recipe for Sand Hill’s banana pudding. “Sometimes she’d have to make two bowls,” Wade says, reflecting on her childhood. “I never felt like I could get enough of it, but I knew I had to share with all the cousins.” The banana pudding is in rotation with other homemade desserts. Last year, Emily Cromwell, an employee who’s been with Sand Hill since the beginning, introduced seasonal desserts and pies. 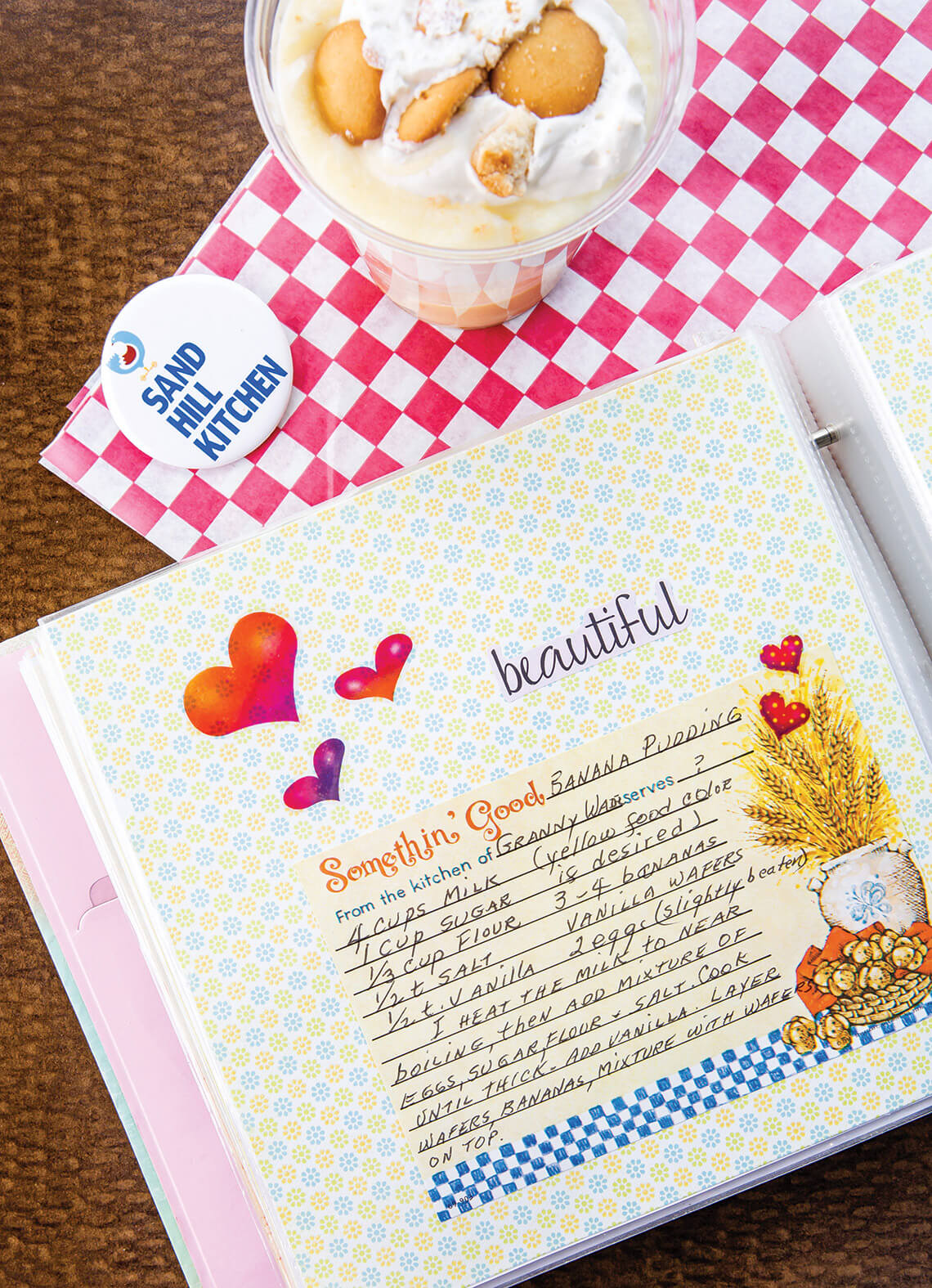 Repeat customers, like Candler resident Rick Crelia, come for breakfast and lunch. Three years ago, Crelia heard about Sand Hill from Stu Helm, “The Food Fan,” an Asheville blogger and podcaster. In 2018, Sand Hill’s fried chicken sandwich was named The Fried Chicken Champion of Asheville in Helm’s elimination tournament on Facebook. Crelia generally stops by at least twice a week. The buffalo fried chicken sandwich is one of his favorites. “It’s like comfort food on steroids,” he says.

Standing by the drive-through window, Wade recognizes the next car pulling up: It’s a family that’s been coming for four years. They order sweet tea, homemade chips, a slice of pie, and a Winner Burger, the champion of The Food Fan’s 2018 WNC Battle of the Burger. The aroma of today’s special — meatball sub with sweet peppers, onions, and mozzarella cheese — escapes as the window slides open. “I wanted to be a part of this community,” Wade says. “I feel very lucky that they support us the way they do.”