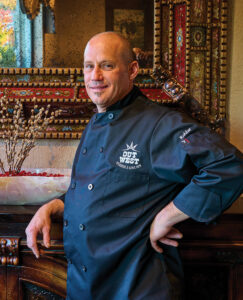 Bobby Leloudis’s father wanted him to come home to the family restaurant business in North Carolina. Bobby was open to the idea, but he wanted his own turf. So he told his dad, Athanasios “Tommy” Leloudis — a Greek immigrant who knew the “surf ” side of the business from owning seafood restaurants — about his idea for a steakhouse.

His dad balked, but Bobby, by then a sous chef at a white-tablecloth place in Myrtle Beach, South Carolina, convinced his father to let him try. “He was a hard-core, old-school Greek,” Bobby says. “He might pound you into the ground about it, but if you had a good reason, he’d listen.”

In 1996, Tommy gave his son some land near Captain Tom’s Seafood Restaurant and Oyster Bar, a business that he’d started with a partner in Kernersville. Now, more than 25 years later, Bobby’s dream, Out West Steakhouse, is a little-advertised local favorite, a go-to spot for customers like Shanon and Beth Spivey. Tonight, the Spiveys are tucked into a high-backed booth that hugs a faux-crumbling brick wall, like one you might see on the set of a spaghetti Western. But this ain’t no ghost town. 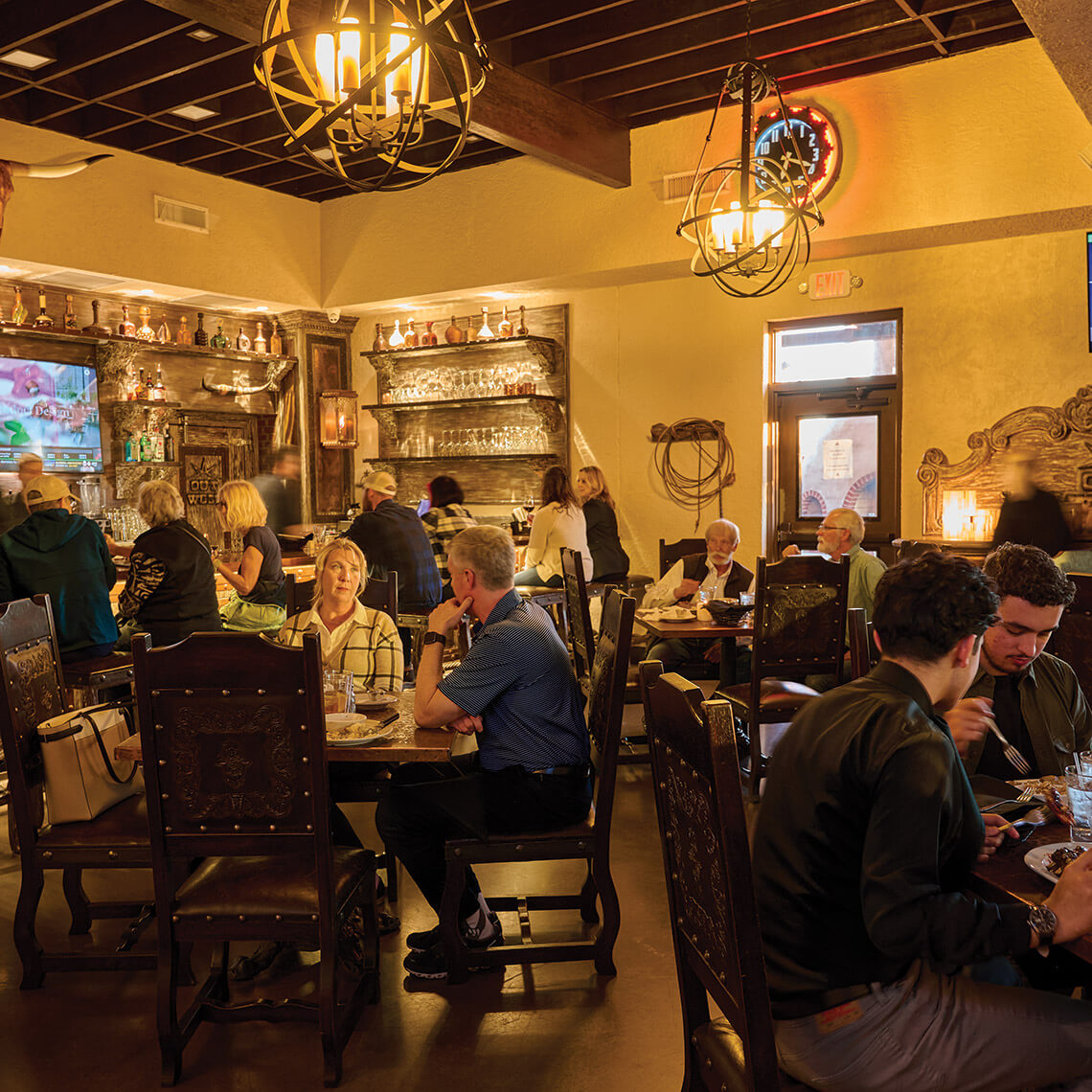 The dining room, where cowboy art mingles with castle-worthy furniture to create a sort of John-Wayne-meets-King-Henry-VIII atmosphere, is filled on a Wednesday night. The Spiveys lean over the remnants of their steaks. “You can’t cook one at home as good as he can cook it,” Beth says.

“He” is Bobby, who stands over the grill most nights. Bobby jokes that he had no other career choice. Born in Winston-Salem, he grew up in his father’s restaurants in North Carolina, South Carolina, and Virginia. He roller-skated through kitchens, bused tables, peeled potatoes, and worked as a line cook. “I really fell in love with the grill,” Bobby says.

He upped his game by graduating from the Culinary Institute of America and by cooking in fine-dining restaurants. Out West was modeled after his senior design project at CIA. Years later, his father, who died in 2013, gave him what he was hungry for: a compliment. “He looked at me one day and said, ‘I’m proud of you,’ ” Bobby says, choking up at the memory. “I was in my 40s, and I was still looking up to this man.” 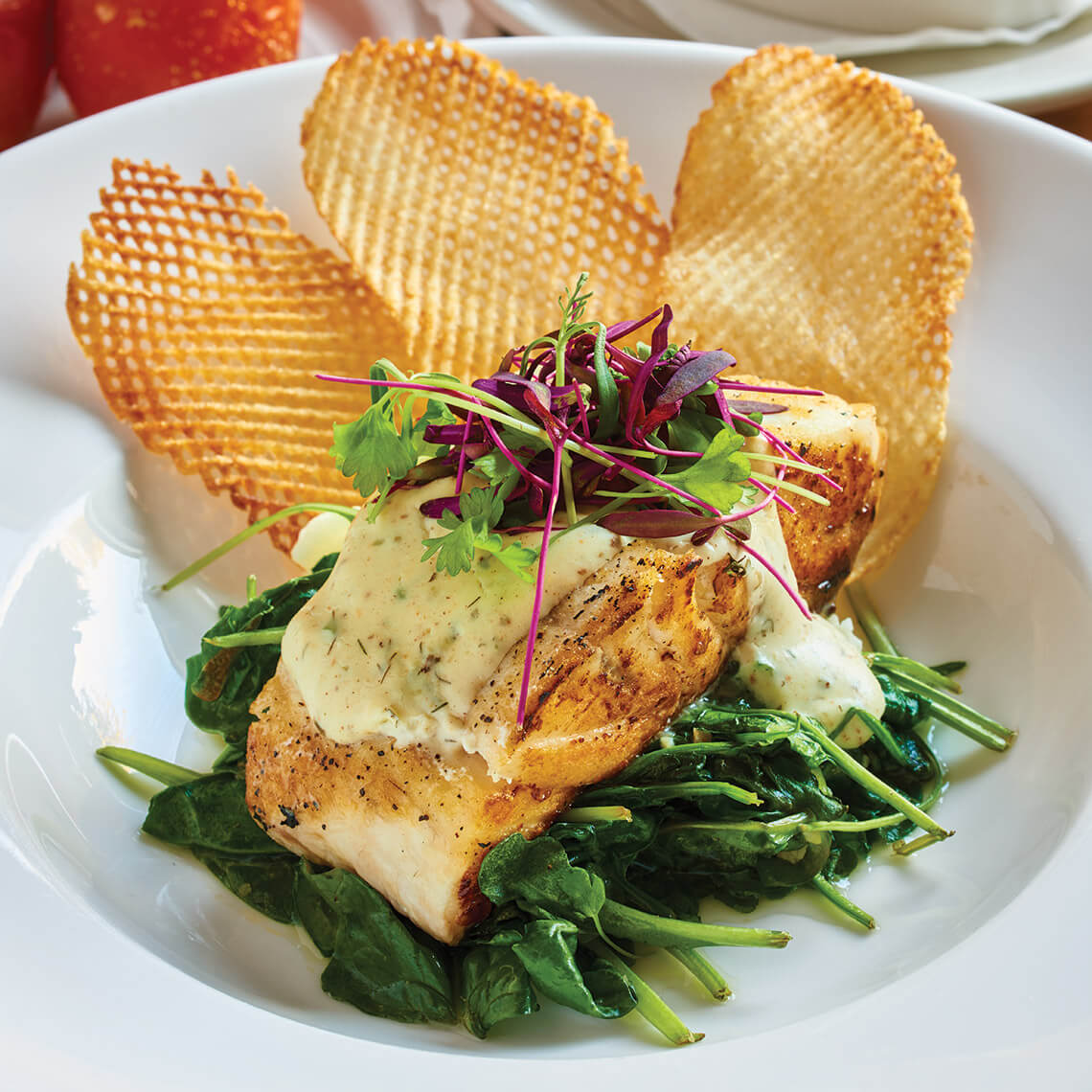 Bobby Leloudis also offers a range of seafood options at Out West, including the lightly blackened grouper served over arugula and spinach and covered in an herb cream sauce. photograph by Dhanraj Emanuel

Today, Bobby often works alongside his wife, Georgia, whom everyone calls Gogo, and their three daughters, Dionisia, Ourania, and Annamaria. “My goal was to create a landmark, a generational place. Now, I feel we’re a spot on the map,” Bobby says. He keeps the menu familiar yet updated, tweaking the choices around the unwavering house special: Texas-spiced prime rib. When the economy slumped in 2007, he added fine wines. The restaurant has won Wine Spectator’s Award of Excellence every year since 2010.

Sitting at the bar where Bobby’s dad used to stand, sip beer, and hold forth, regular Betty Burger works on a plate of blackened chicken. She ate at Out West three times last week. The close-knit atmosphere, part of the Leloudis family legacy, keeps her coming back. “I know everybody, and everybody knows me,” she says. “It’s warm. It’s cozy.”