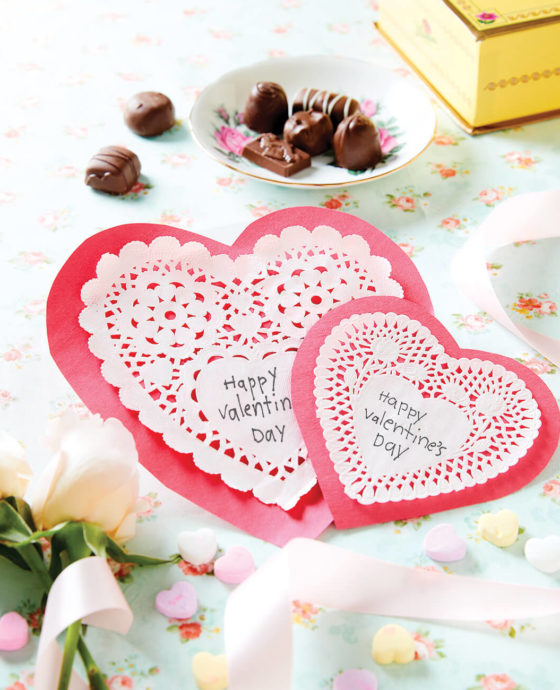 I have a friend with a passion for lip-smack symbols on everything — her stationery, beach towels, cocktail napkins, socks. For her, Valentine’s Day is all day, every day. Maybe not so for everyone, but February 14 is still special. For most people, Valentine’s Day is more of a, shall we say, frolicsome, lighthearted holiday. While its ancient roots herald the arrival of spring, we know better: Valentine’s Day exists to get us through winter’s final, grimmest grip.

Every February, 145 million Valentine’s Day cards are mailed in the United States. But this figure doesn’t include all those “sent,” sans stamp, by millions of schoolchildren to thousands of classroom valentines folders and boxes. Every February, my mother bought red and pink construction paper and a package of doilies. She showed me how to fold a piece of paper and cut an elongated half-moon, then open it, creating a perfect heart shape. Too fragile to hold a shape, the doilies were pasted — carefully, or the glue would clog the delicate openwork — on top of a larger scissored heart. My homemade valentines naturally had no envelopes, and I crayoned your basic To/From/ Happy Valentine’s Day message within the middle heart. How I longed for store-bought valentines with snappy slogans and recognizable characters like Mickey Mouse and Yogi Bear, and how rueful am I now at my crass preference for the commercial over the creative.

Valentine’s Day is my mother’s favorite holiday. She’s 91, but there’s never been a February 14 that a Whitman’s Sampler hasn’t appeared at our doorstep. The yellow box, with the stiff cardboard rim and the layer of that padded precursor to bubble wrap inside that is simultaneously crunchy and soft. I probably learned how to read the key on a Whitman’s Sampler lid (Messenger Boy, Molasses Chew) before I could read a North Carolina map key (railroad tracks, lighthouse, airport). And learned as well to leave the Cherry Cordial for some other sucker.

And what an improvement over chalky conversation hearts, the Valentine’s Day equivalent of Halloween’s orange marshmallow peanuts. Red Hots were much easier to fit inside an envelope of your elementary school valentines and didn’t carry the concern of a message that might be taken too seriously: Let’s Kiss. Hot Stuff.

After childhood, Valentine’s Day wades into the paradise — or swamp — of romance. Boyfriends, girlfriends, sweethearts, secret admirers. Roses, candles, diamonds, dinners. The stuff of attraction, the symbols for passion. But any casual browse through a greeting card rack will reinforce what you already know: that Valentine’s isn’t just for lovers, but also for grandparents and siblings and best friends and man’s best friend.

Because love is a too wide-ranging, impossible-to-pin-down gamut of feelings to be limited to mere romance. Love is appreciation for the walker who stops to help you pitch the ropes over a high tree branch to string up a swing or always has a treat for the dog. Affection is a form of love, too, for the heavily accented owners of the small bakery who assure you they’ll have the sauerkraut hand pies ready, or the co-worker who shares his tech skills. I’d like to send a valentine of admiration to those who plant the coreopsis and the poppies along highway medians. Can I just send a valentine to the trees on a curving mountain road in autumn when it’s been raining, and the yellows of their leaves are so stark and bright against the silver wetness of their bare trunks and the green rhododendrons behind them? 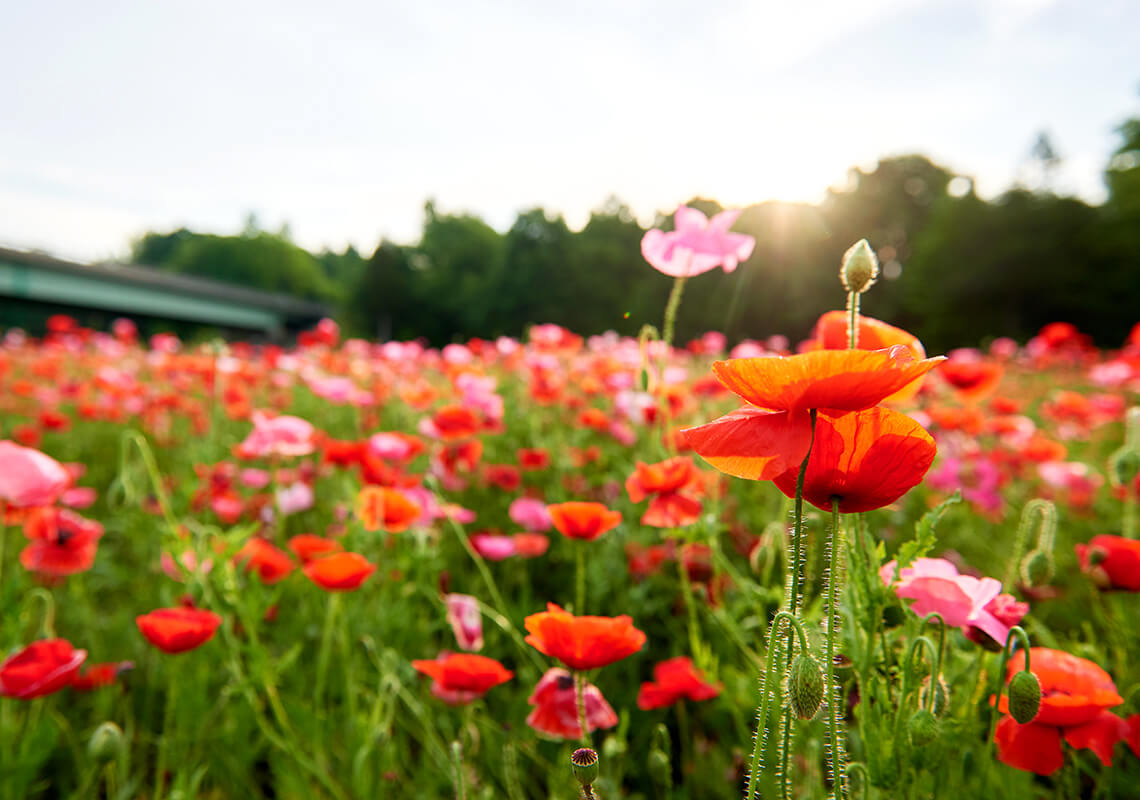 Surely the unsung highway crews who plant the beautiful flowers along North Carolina’s highways, like these poppies in Greensboro, deserve a valentine of appreciation. photograph by Joey Seawell

A valentine is a valentine, no matter the feeling or the phrase.

A valentine is a valentine, no matter the feeling or the phrase. I hold dear the way steam rises from a lake at dawn. I am partial to how a pelican dives, arrowlike and heedless. I have a weakness for the parking lot of Wilber’s Barbecue on any given Sunday at lunchtime. I feel affection for ice that freezes in little knifelike shards on plowed field furrows. I fancy the Profile Trail, the Pisgah Inn, the Rodin sculptures at the N.C. Museum of Art, and the arched walkway bridge over U.S. Highway 440 as you enter Raleigh. I have a thing for a certain boulder the children call The Turtle because of the way it juts out at the bend of a road. I am devoted to the signs for the Eastern Continental Divide that you cross and cross again all over the western part of the state. I am keen on the Cherry Cokes at … no, the doughnuts at … no, the hushpuppies at …

I feel tenderness for a crescent moon, a curling wave, a shy crocus, and cardinals at my feeder. I am attracted to the Chihuly sculpture in the lobby of The Umstead Hotel and Spa, the Charlotte skyline at night, hunting blinds on stilts in a field razed to sticks, the walkable docks of Morehead City. I find irresistible my mother’s tiny, vanilla-colored ceramic dish shaped like North Carolina with WALNUT COVE, her hometown, painted with a star.

For a person, place, or thing — with a wish, a prayer, or a homemade valentine — love is love is love, and there’s surely plenty to go around.