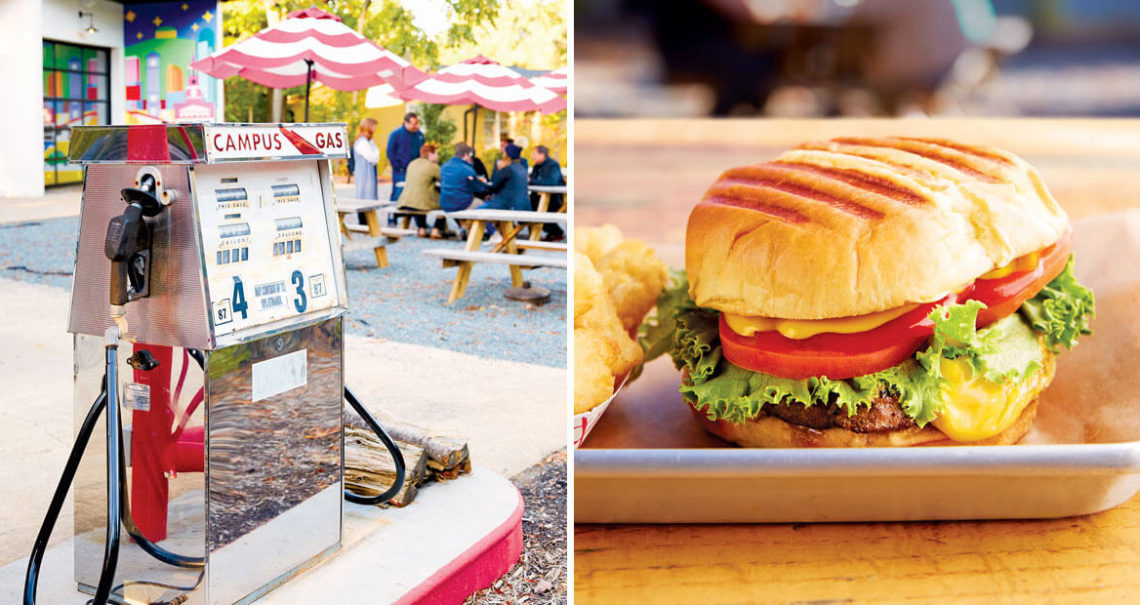 Ben Ingold can’t help but chuckle as he looks out at the twin gas pumps standing side by side in front of the grill and bar that he and a couple of college buddies opened in November 2018. Campus Gas, as the name suggests, was a filling station in its previous life — a Phillips 66 that had served the Polo Road neighborhood across from Wake Forest University since the mid-’60s — and more than a few passing motorists had trouble adapting to the building’s new function. “When we first opened up, people would pull their car right up beside the pumps, get out of the car, and then not be able to pull the handle on the pumps,” Ingold says. “They’d look around for a minute, confused, and then they’d get back in their car and drive away.” They didn’t even stick around for a beer and a chili cheese dog.

Wayward drivers in Winston-Salem don’t turn in looking for gas anymore, not since Ingold and his partners installed concrete parking blocks to prevent cars from lining up. But the vintage pumps remain as a pair of nostalgic throwbacks, reminders not only of the days when customers could pump gas here, but also of the era when an attendant did it for you.

“The pumps are really just art now,” Ingold says. “We refurbished them, and people like taking pictures of them. They might set their beers on one or lean up against them while they’re talking. They’re just part of the atmosphere.” Like the majestic batwing canopy that shelters the outdoor seating area, and the two automotive bays where mechanics once changed oil and rotated tires, the just-for-show gas pumps remind visitors that “this place is almost timeless,” Ingold says. “Unless somebody told you, you wouldn’t know if this was 2019 or 1969, because not that much has changed. It’s a community place, and that’s what it’s always been.”

“The pumps are really just art now. People like taking pictures of them.”

Traditionally, gas stations have not been the go-to for dinner dates and after-work drinks. Though, it must be said that in North Carolina, it’s possible to get surprisingly good fried chicken and breakfast biscuits while purchasing a full tank and a lottery ticket. But that’s another story. More often than not, the only “cooked” food offered at a filling station is day-old hot dogs spinning on metal rollers beneath the lukewarm beams of a heat lamp. That is, unless the gas station is no longer a gas station. Repurposed and renovated, these angular, mid-century buildings transform perfectly into culinary destinations. They’re eye-catching, of course, but they’re also appealing examples of the trend of creative reuse. In North Carolina alone, more than a dozen old-school filling stations have been refashioned: into a cocktail bar in Greensboro, an Asian noodle and dumpling joint in Asheville, and a bustling pizza chain in Charlotte.

Part of the appeal, as any commercial real-estate agent will tell you, is location, location, location. Because gas stations tend to be on corner lots, with high visibility and easy accessibility, they’re perfect homes for restaurants, says Ellen Dunham-Jones, a professor of architecture and urban design at the Georgia Institute of Technology who has studied the trend. “As fuel efficiency has gone up, the number of gas stations has declined,” she explains. “It’s nice to see them turned into restaurants, where the canopies now provide patio dining and the garage doors provide indoor-outdoor connectivity. They often provide a walkable destination for their neighborhoods, too.”

But the past lives of these properties come with environmental concerns about oil and gas spills. “You’ve just got to know that going into it,” Ingold says of the renovation process. “And you hope you’re not going to find something really terrible.” At Campus Gas, he removed two underground tanks and the soil around them. “Thankfully, it wasn’t too bad,” he says. 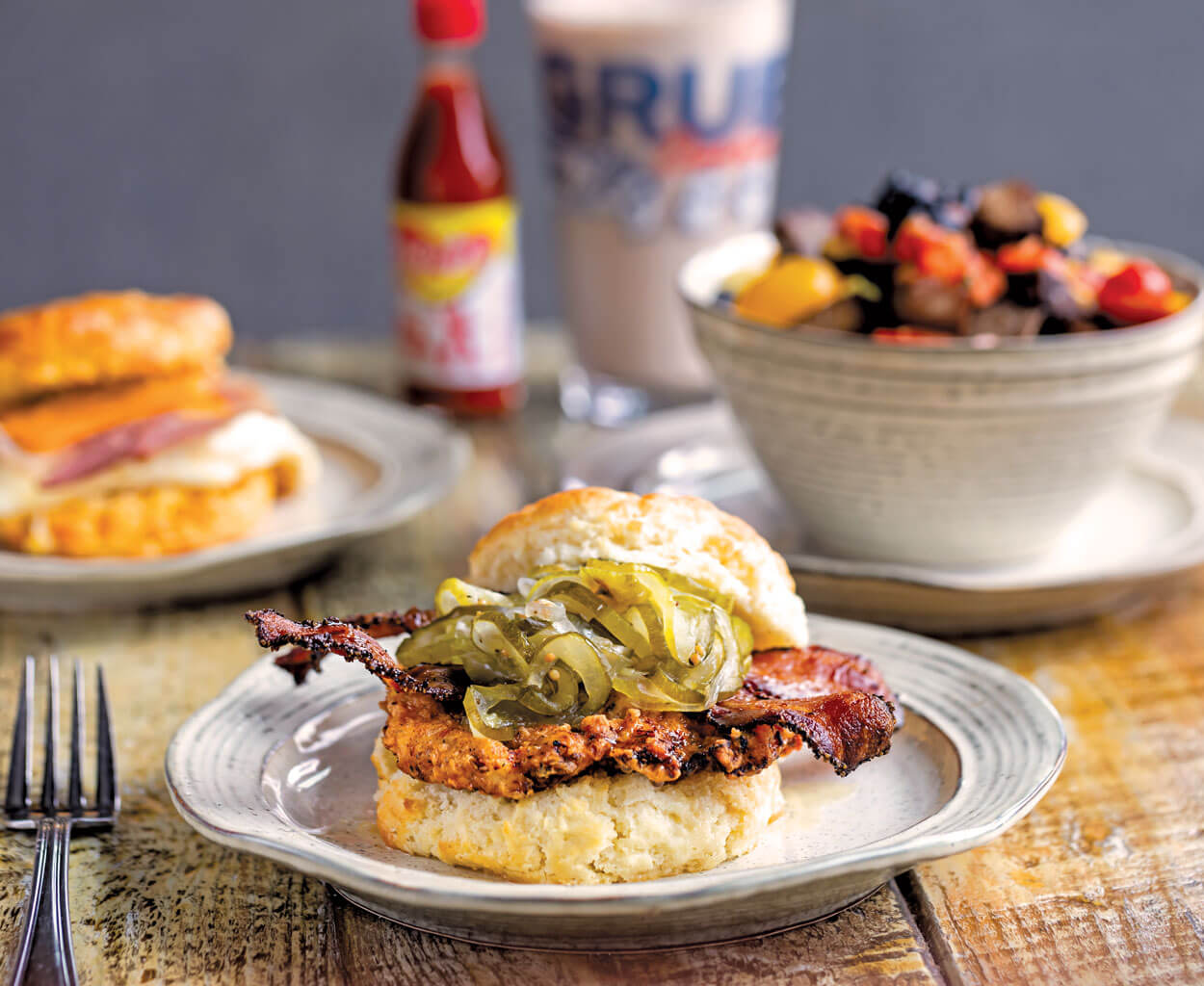 GRUB in Durham serves classic dishes with a modern twist: a fried chicken biscuit topped with maple bacon and pickles; ham, egg, and cheese on a sweet potato biscuit; a grits bowl loaded with brisket and salsa; and a healthy smoothie packed with nuts.

For many owners, the cleanup is a small price to pay for a property with rich history and architectural flair. Which is why restaurateurs do everything they can to preserve the dramatic details like roll-up bay doors and mid-century signage. GRUB in Durham kept a canopy, but the pumps beneath it have been replaced by raised garden beds. The roof is now decked out for dining and drinks. Still, the place has the look of the Pure Oil Gas Station it once was.

The history of these buildings often inspires the names of the businesses, too. Fuel Pizza in Charlotte, for instance, embraces its grease monkey origins in more ways than one. “We have gas pumps out front, and we have old, antique signs, gas cans, and other kinds of gas-station memorabilia all over our restaurants,” says Lincoln Clark, a co-owner of Fuel Pizza, who converted two circa-1935 gas stations into restaurants specializing in New York-style pizza.

“Originally, I would scour the countryside looking for antiques shops and old gas stations, recovering old signs and stuff like that,” Clark recalls. “Twenty years ago, people would come in and go, ‘Oh, wow, look at this old Esso sign,’ or ‘Look at this old Standard Oil sign.’ Now, we’re getting millennials, and they’re not even aware of what the signs represent, so it’s less exciting for them than it is for baby boomers.”

“You know, they’re not building any more of these old service stations. They’re knocking them down.

For older patrons, the buildings themselves are filled with memories. The Station at Person Street, a Raleigh watering hole and restaurant, was once an Amoco gas station that served the historic Oakwood neighborhood. Gan Shan Station, an East Asian restaurant, occupies what was once a Gulf station in north Asheville. “This space had been such an integral part of the community for such a long time. I wanted to honor that,” says owner Patrick O’Cain. The original bay doors are now windows with benches, so from the outside, the restaurant still resembles its former self. But inside, the warm aromas of ginger and sesame are a world away.

The owners of Dram & Draught, an indoor-outdoor bar in Greensboro that’s housed in a 1950s-era service station, understand that customers want an atmosphere that feels both comfortable and different; a vintage gas station provides both. Dram & Draught co-owner Kevin Barrett says he appreciates that these buildings are the last of their kind. “You know, they’re not building any more of these old service stations,” he says. “They’re knocking them down.”

Fortunately, customers want to preserve that history, too. “People love telling us their stories,” Ingold says of the diners at Campus Gas. “They share memories of coming here with their dad or their grandpa, and getting a soda out of the old drink machine, that kind of thing. We feel like we’re bringing something back to life.”

CAMPUS GAS
A short and sweet menu of hot dogs, sandwiches, burgers, and milkshakes is perfectly suited to the mid-century modern digs. Beer and cider are on tap to sip inside or outside of this former country store and Phillips 66 station.

DRAM & DRAUGHT
A place for quality sips and conversation. The menu includes rare and vintage whiskeys, cocktails made with North Carolina spirits, and craft brews. And to think: Gulf station attendants here once asked customers, “Check your oil?”

FUEL PIZZA
Spicy wings and New York-style pizza are the draw here. There are now four Fuel locations in Charlotte, but only one of them — the original location — offers seating in a vintage Pure Oil Gas station.

GAN SHAN STATION
Not many (or any) gas stations can boast a chef’s table. But at this former Gulf station that dates back to the 1940s, the chef turns out praiseworthy Asian dishes, from ramen to pad Thai to fried or steamed whole fish.

THE STATION
Pub grub — from bacon pimento cheese dip to salads and burgers — hits the spot at this 1930s- and ’40s-era Standard Oil station. Sandwiches span the globe: Try a Cuban, a banh mi, or a down-home sloppy joe.