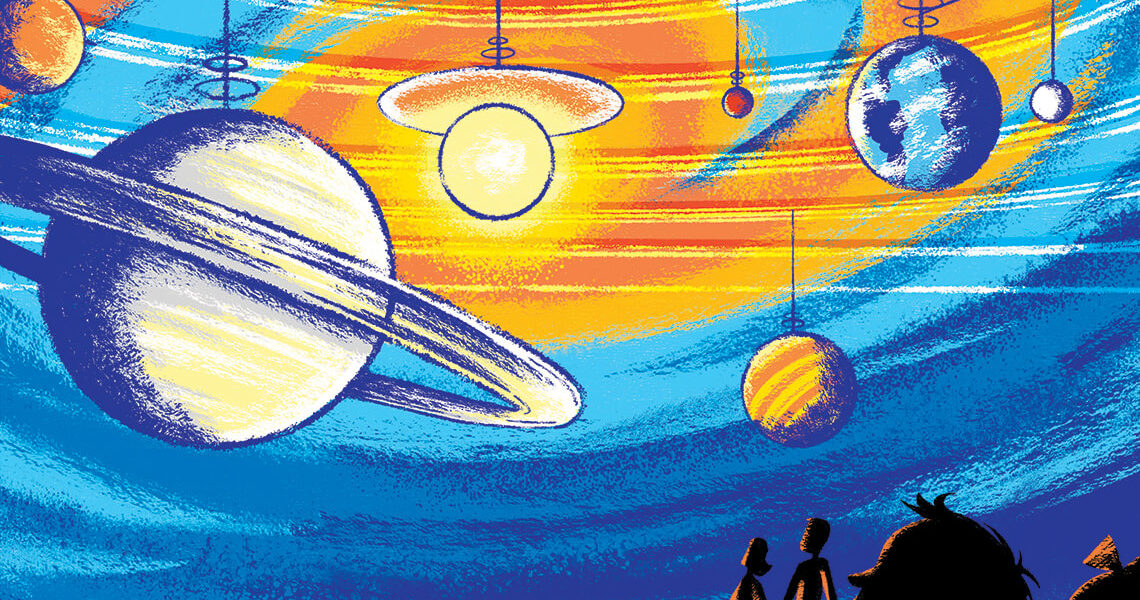 You would walk down a couple of steps into a darkened exhibit area. Then through a door and a couple more steps across a dim room, where you’d whack a big red button softly glowing on the wall.

And then the noise. Oh, the noise: a ratchety clank, the grind of gears and shafts and motors all hurrying to spin at once — a bicycle-chain glory, the cacophonous rattle of the industrial attempt to model, literally, the mechanism of the universe. Then a little music, followed by a baritone voice telling the story of the solar system, while above your head, the planets spun — starry messengers bearing their cargo of light and wonder.

From the bottom level of the Morehead Planetarium on the campus of the University of North Carolina at Chapel Hill, you could watch celestial bodies spin. Some of the planets were the size of pieces of fruit, mind you, their moons little Ping-Pong balls on arcing steel rods that guided them around a hanging Earth, Mars, Jupiter, and Saturn. But still, there they were, whirring along tracks suspended from the ceiling, re-creating the orbits of planets around the Sun, moons around the planets. In less than an hour, you could watch Earth completely circle the Sun (which was, of course, a glowing orb at the center of the room); see the Moon circle Earth, passing from light into shadow into light; and watch the classical moons of Mars, Jupiter, and Saturn do the same.

Be aware that this is a love letter to a moment passed: The orrery (that’s what a model of the planets is called) is now utterly gone and has been for more than a decade. That nobody is sure exactly when in the first decade of the 21st century it passed is part of the almost heartbreaking sweetness of the story of this Copernican orrery, which was part of the planetarium when it opened in May 1949.

As to why a model of the solar system is called an orrery, don’t go looking for the roots of “orb” in there. The name comes from a model made by clockmakers George Graham and Thomas Tompion for Charles Boyle, the Earl of Orrery, in 1704. Boyle liked it and commissioned another, and the name of his earldom stuck. Orreries go back further, though: Cicero tells us that Archimedes built one by applying complex mechanisms to show how the Moon revolved about Earth and Earth about the Sun.

In the Morehead’s orrery, Earth was about the size of a head of lettuce, but the model still took up an entire room. And it only went out as far as Saturn. It ignored Neptune and Uranus, let alone Pluto, which, if we stretched the model to its own distance scale, would have been out in the planetarium’s yard with the sundial. At that scale, of course, the planets were far from accurately sized. If you tried to make a model with an accurate distance scale based on a lettuce-size Earth? If you left the Sun shining as a dim bulb hanging from the ceiling in the basement of the planetarium? By my estimate, an accurately distanced Earth would be watching a game at the Dean Smith Center, a couple of miles across campus; Saturn and Neptune would be miles and miles away. 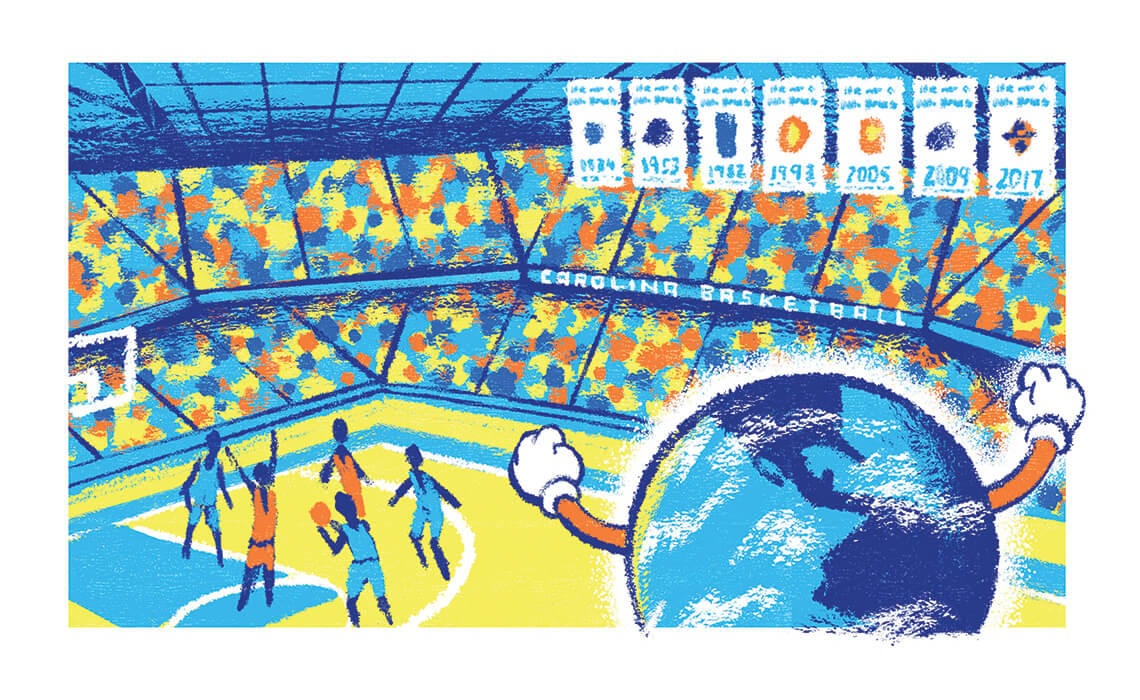 Scale wasn’t the goal; the goal was to get you to see that all of those whirring, cycling planets were out there, and that they were far away, but you could understand them. That is, part of the goal of the orrery was to put you in mind of how small Earth is on a solar-system scale, let alone how small it is if you try to wrap your thoughts around a galactic or an intergalactic scale. We are tiny specks on a tiny planet orbiting an average sun, one of billions of stars in what Douglas Adams famously called “the unfashionable end of the western spiral arm” of the Milky Way galaxy, itself only one of an infinite number of galaxies. We are nothing.

“Look on my works, ye Mighty,” our little brain cries as it builds a model of the universe, “and despair!”

And yet, on the other hand, another goal of the orrery was to share some of the foundational concepts that set that solar system in motion. Our brain observes the universe and explains the whole thing. “Look on my works, ye Mighty,” our little brain cries as it builds a model of the universe, “and despair!” The whole is even more appropriate given that the orrery, like the statue in Shelley’s “Ozymandias,” eventually failed. It succeeded in its explanatory role, but it failed because, like Shelley’s statue, all things must pass.

The Morehead orrery may have passed somewhat sooner than it needed to, recalls James Horn, who was in charge of technology at the planetarium for years before he left in the 2000s. When he joined the staff in 1969, he says, the orrery had been running almost nonstop for two decades. One of the first things he did was install that glowing button so the machine could rest and stop wearing itself to pieces when nobody was looking at it. The parts lasted longer over time, although Horn occasionally had to turn to the physics department to ask them to produce replacement brass gears for the motors that ran the planets.

Beyond wearing out gears, the orrery — a dark place in the basement of a big building that harbors students on field trips — had other issues. “Teenagers going in there to make out in the dark,” Horn recalls wryly. To say nothing of common planetary theft. “We never lost any of the superior planets,” he says, “but, boy, Mercury disappeared on a regular basis.” No problem. Someone would just get another ball, airbrush it, touch it up with glowing paint (ultraviolet light made the whole thing even cooler), and jam it back onto the mechanism.

Eventually — somewhere around 2007-ish, although nobody can commit — the orrery just wore down so much that the Morehead put its resources elsewhere. By then, the modern museumgoer preferred screens, CGI, and interactive videos. The planets of the largest working orrery in the world (it was!) stopped spinning, stopped orbiting, and ended up in a closet marked “The Chapel Hill Astronomy Club.” Michael Neece, the Morehead’s current historian, snapped some final pictures of the pile of planets.

The orrery is missed. Not because it was such a marvelous scientific instrument or even because of its ability to communicate complex gravitational concepts. It’s missed because it was a place of magic. And even — especially — in science, we need magic. In fact, in the painting A Philosopher Lecturing on the Orrery (which hangs in the Derby Museum and Art Gallery in England), Joseph Wright, in 1766, slyly brought to life the fascination of gazing at, in this case, a tabletop orrery. A red-coated lecturer points as other adults take notes and frown in concentration. At the center of the painting is not the orrery itself, but two children, their faces glowing in lamplight. The tiny planets float before them on little stands, and, as the adults pronounce and study, the children, enraptured, simply gaze.