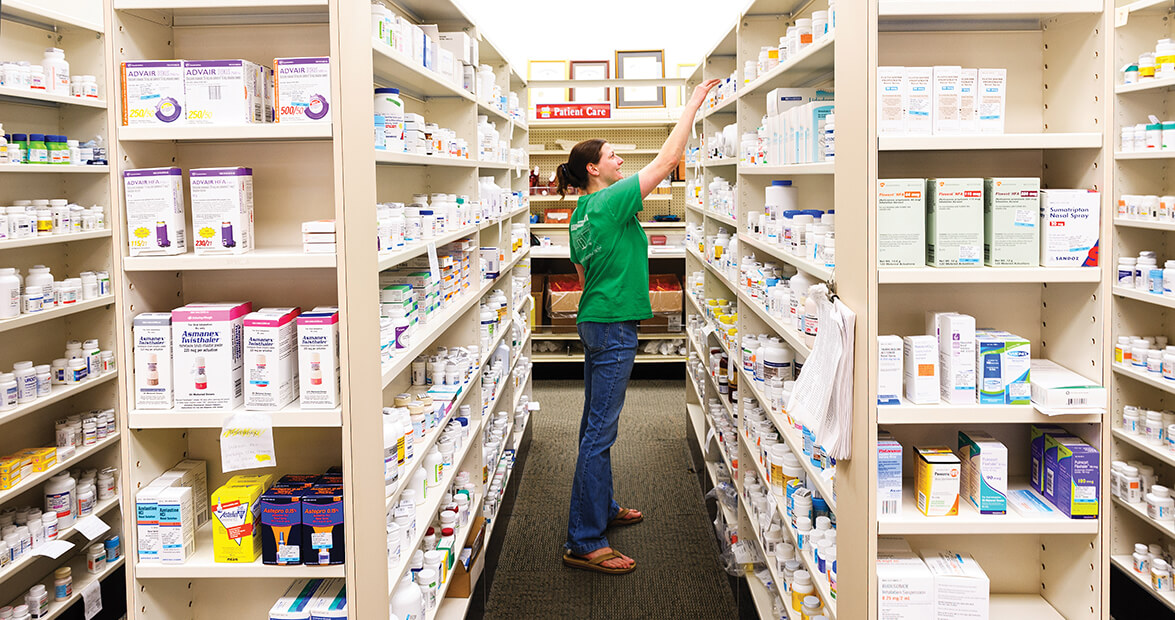 Editor’s Note: This story was originally published in July 2013 and updated in January 2018.

When you walk into Gate City Pharmacy in Greensboro, you see the pharmacists first. Several of them, talking on phones, counting pills, consulting with customers.

“You can walk in the front door and say, ‘I need to speak to a pharmacist,’ and one of us will be there in 10 seconds,” says Mike Skertich, co-owner of Gate City.

But in the world of big-box pharmacies that stock everything from Pringles to beach chairs, finding a pharmacy like Gate City that places value on the relationship between a customer and his pharmacist is rare.

Many pharmacies are the size of grocery stores and require customers to weave through aisles of beauty products and candy to find the pharmacy counter hidden in the back.

But Gate City is small. It has only 3,500 square feet of retail space, and customers can see every inch when they enter. The left wall reads “greeting cards”; the right, “health center.” And in the middle, above the counter in the back where all the activity happens, the wall says “prescriptions.”

“We get people who come in and say, ‘This is a real drugstore,’” says Caroline Drake. She’s the redhead behind the counter who talks to everyone who walks in. When she sees familiar customers approaching Gate City on the sidewalk outside, she has their prescriptions at the register before they get in the door.

Drake started here 31 years ago. She was a high school student looking for part-time work. She left for a few years to go to beauty school, but she came back.

Now she works three days a week: Wednesday to Friday. Customers plan their prescription pickups around her schedule. People often tell her that with a personality like hers, she should be in sales. They tell her she’d make more money. But she’s comfortable here.

“I don’t want to be anywhere else,” she says.

He joined Gate City Pharmacy in 1966 after graduating from pharmacy school at the University of North Carolina at Chapel Hill and serving in the U.S. Army. He started as a pharmacist, but by 1979, Buchanan became the sole owner.

“The college and high school students that we hired were a huge asset to the company,” Buchanan says. “They brought a lot of knowledge, and most of them wanted to learn and be a part of the company.”

One of those college students was Janie Skertich.

Janie grew up in Greensboro. Her mother worked at Bernard Shepherd Clothing Store, which was beside Gate City. One day, Janie walked in and asked Buchanan if she could work at the pharmacy to gain some experience as she completed her degree at UNC. By 1995, she was working at Gate City as a full-time pharmacist. Six years later, her husband, Mike, another UNC pharmacy graduate, began working here, too.

“We were putting all our eggs in one basket,” Mike says. But it turned out to be the right basket.

In 2010, when Buchanan and his wife, Barbara, decided to retire, they offered the Skertiches a chance to buy the pharmacy. Today the couple runs the pharmacy just like Buchanan taught them.

They keep plenty of staff members on hand. Fifteen or 18 people may be working behind the counter at one time. Every day until 2 p.m., five pharmacists are here. Gate City Pharmacy fills about two to three times the number of prescriptions filled by a typical chain store in a day. But if a customer comes in and needs to talk to someone, all those other prescriptions can wait. Here, someone always has time for a question.

“We would rather be overstaffed and take care of every customer, than short-staffed and have a customer walk out the door and not come back,” Mike says.

And for customers who can’t manage to get to Gate City themselves, someone brings that service to them.

Fred Hicks is a Gate City Pharmacy employee, but he’s rarely in the store. He spends at least six hours a day in his 1995 Toyota Tacoma pickup making deliveries. For $3 extra, Hicks brings customers’ prescriptions to their homes. The service also includes birthday cards, get-well cards, whatever the customer needs. Hicks makes 45 to 65 deliveries a day and averages 100 miles.

He started here part-time and only planned to stay for two or three months. Nineteen years later, he has no plans to leave.

“I just love what I’m doing,” he says. “I go the extra mile for them. I take their trash out, go to the mailbox. Some customers set their watch by the time I’ll be there.”

Not counting his vacation, Hicks has only missed two days of work since he started. If Hicks plans to take a few days off, his customers ask him to deliver their medicine a couple of days early.

“They like to talk to me,” he says. “Some of them don’t see anyone except for me. They offer to fix me lunch, dinner, have a cup of coffee.”

Mike says the delivery service is another thing that sets Gate City apart. When Hicks was on vacation awhile back, Mike made a few deliveries for him. One required him to drive 35 minutes from the pharmacy. He came back and said, “Fred, I can’t believe you drive out there.”

The delivery service doesn’t make the business any extra money. It probably costs more than it brings in, Mike says, but it’s the right thing to do. People count on it. And at Gate City, doing what’s right goes a long way.

On Gate City’s website (yes, it has one, and it brings in close to 150 electronic prescriptions every day), a note on the home page says, “Welcome to all former Burton’s Pharmacy customers. We will be happy to assist you in filling your prescriptions.”

After more than 30 years of business, Burton’s Pharmacy in downtown Greensboro closed April 2012. The owner sold to the Rite Aid chain.

Some might think another Greensboro pharmacy closing would be a positive for Gate City. Burton’s offered a similar experience, familiar faces, small venue. It was the competition. But that’s not how independent pharmacies work, at least not in Mike Skertich’s opinion.

“We don’t want the next guy to close up because we know one day that could be us,” he says. “I’m pulling for [the independent pharmacies]. If they survive, we do, too.”

Mike maintains a working relationship with other independent pharmacies in town. He talks with the people at Brown-Gardiner Drugstore on Elm Street every day.

But if there’s something Brown-Gardiner doesn’t have, then the pharmacist there will send the customer to Gate City. And Mike will do the same.

“There’s plenty of business out there for all of us,” he says.

And when you walk into Gate City, you get that impression. You see people moving quickly behind the counter labeled “prescriptions.” You hear the phone ring. You hear someone answer with a friendly voice. You stand there and watch them work. You think to yourself, this must be what a real pharmacy looks like.

Then you step to the counter and before you say a word, Caroline hands you your prescription. And it makes sense — why she’s here and why Fred’s here and why the same customers have been coming here for decades. Once you find your local pharmacy, the one that knows you best, why would you go anywhere else?