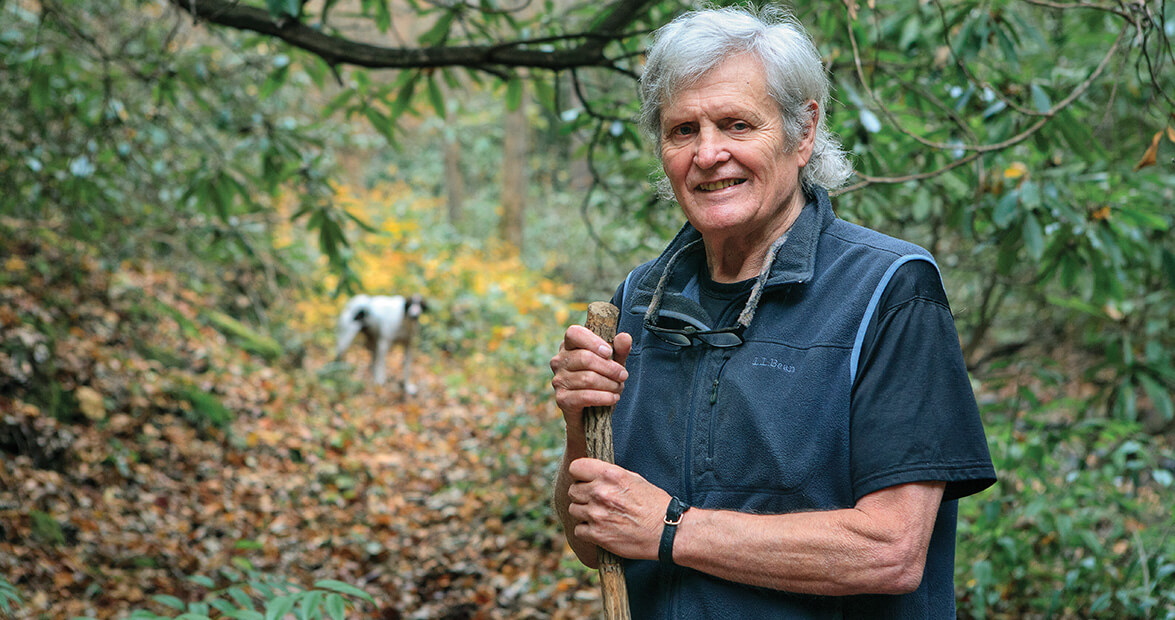 George Ellison pens his poetry from a slightly neglected back room adjacent to his wife’s sprawling Bryson City art studio, leased from the hardware store below. In stark contrast to the watercolors and mixed-media artwork that line the walls of Elizabeth’s studio, George’s office is denoted by a single handwritten sign on the door and, just beyond that, bookshelves — some little more than planks of wood balanced atop concrete block. Along one wall is a long wooden writing desk occupied by a computer, its monitor elevated upon a cinder block.

This, George says, is where he writes.

But writing and composing are not the same things. There is a place for each. This is of particular import for George, who describes himself as a person who has been irrevocably affected by place.

More than 30 years later, he continues to immerse himself in the written word.

In the early 1970s, while working as an assistant English professor at Mississippi State University, George began researching Southern writer and naturalist Horace Kephart, who’d retreated to the Smokies seven decades earlier for his own writing career. So when George suggested to his wife that they move to Bryson City, he did so with plans to pursue writing as profession, without the filter of academia to muddy his work.

George, Elizabeth, and their three children relocated. It was a new beginning. More important, it was a new place.

One day, a few years after moving, the Ellisons were exploring the Great Smoky Mountains National Park when they discovered a private gate deep in the woods. They followed the trail beyond until it opened into a holler, where they found a small homestead overlooking a winding creek and surrounded on three sides by parkland. They tracked down the owners of the cabin, who agreed to rent it to them for a summer, and then another and another, and many more after that.

Those summer months were the start of a journey: George pursued writing as a profession; Elizabeth painted; their children grew. The Smoky Mountain cabin was only miles from their full-time home in Bryson City, but it provided respite, a place to wander during the day, to cook over a woodstove at dusk, and to fall asleep at night, reading by lamplight.

George was prolific during those early years, writing poems and publishing a poetry magazine from 1973 to 1980. He kept his poems in an old cardboard box. As he shifted focus, moving into nonfiction nature writing and academic research, the box was shelved, but not forgotten. Meanwhile, he read everything he could about the natural world. He studied the Cherokee Indians and researched mountain botany. He wrote essays and biographical introductions for several Kephart volumes.

In time, the box of poetry was misplaced. He searched for it on occasion, without success. 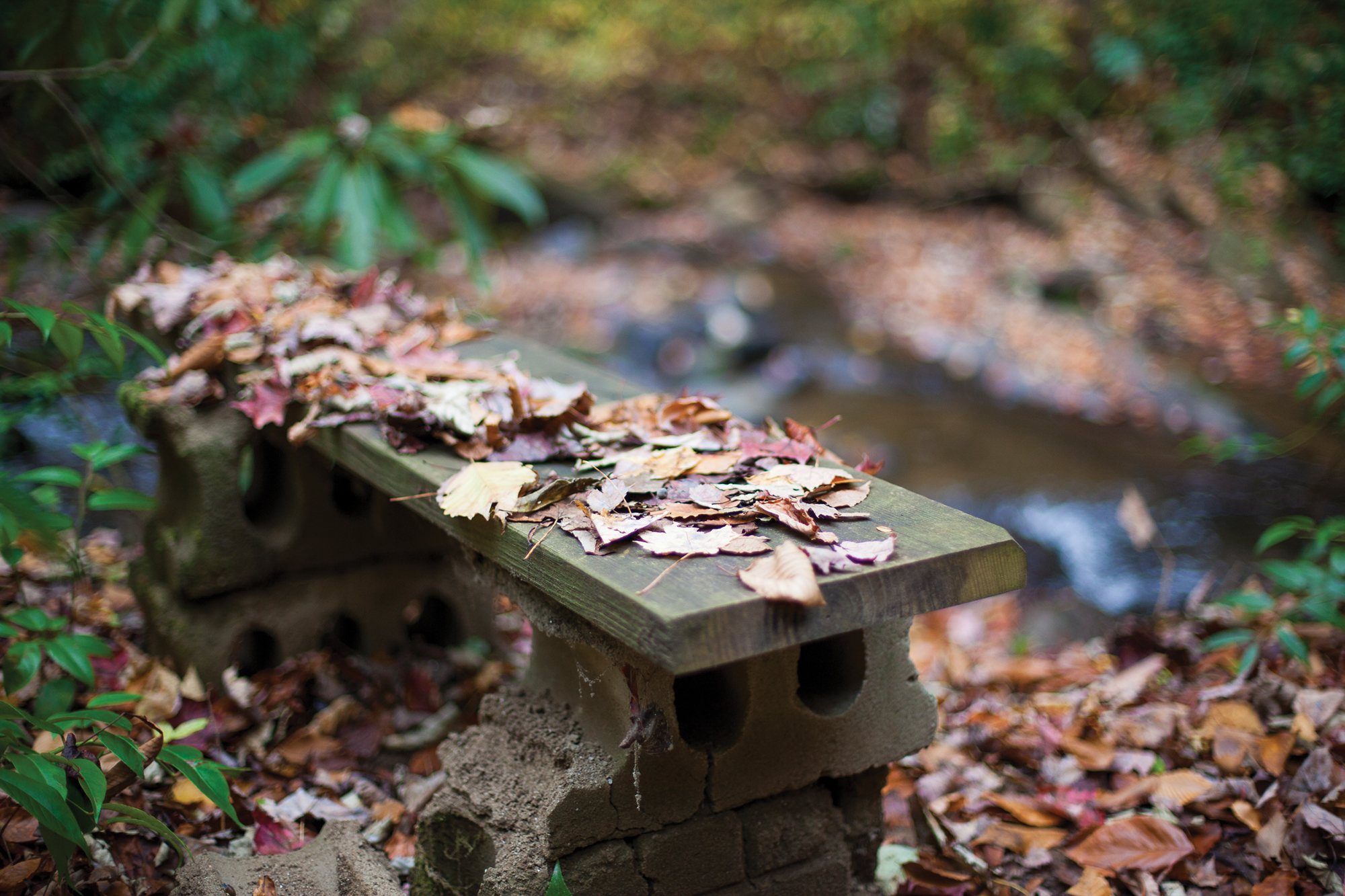 Ellison’s walks often take him to the place where he composes his poems, a spot by the creek with a wood-and-cinder-block bench he set up 15 years ago. photograph by Matt Rose

Landscapes, within and without

Eventually, the Ellisons purchased the cabin and 50 acres where they’d spent their summers so they could live there full time.

The property isn’t as secluded as it once was, but it’s home, and it remains an example of nature at its finest — Elizabeth’s horse roams the property with two German shorthaired pointers.

Had the Ellisons stayed in Mississippi or moved somewhere else, life would have been different, though George and Elizabeth differ on how. He questions whether the writing would have ever happened; she says it most certainly would have.

“I can,” George says, “divide that right down to our house. I’ve developed a sense of geography. A sense of terrain.”

Often before he writes, he walks himself verbally and mentally through the different parts of this emotional geography, or what his friend and colleague Kathryn Stripling Byer, North Carolina poet laureate emeritus, calls his “interior landscape.”

The discovery of the long-lost box of poems from the 1970s prompted the publication of George’s latest book, Permanent Camp, which he describes as being written from the back of his mind. As he grows older, George has found that writing poetry, as opposed to prose, allows him to slow down and compose in a rhythmic manner that is therapeutic. “I am most myself when I am talking to Elizabeth and writing poetry,” he says.

Rediscovering the poems not only rekindled his writing, it rekindled his soul: “It gives me some elbow room to write. To express myself looking for rhythms.” 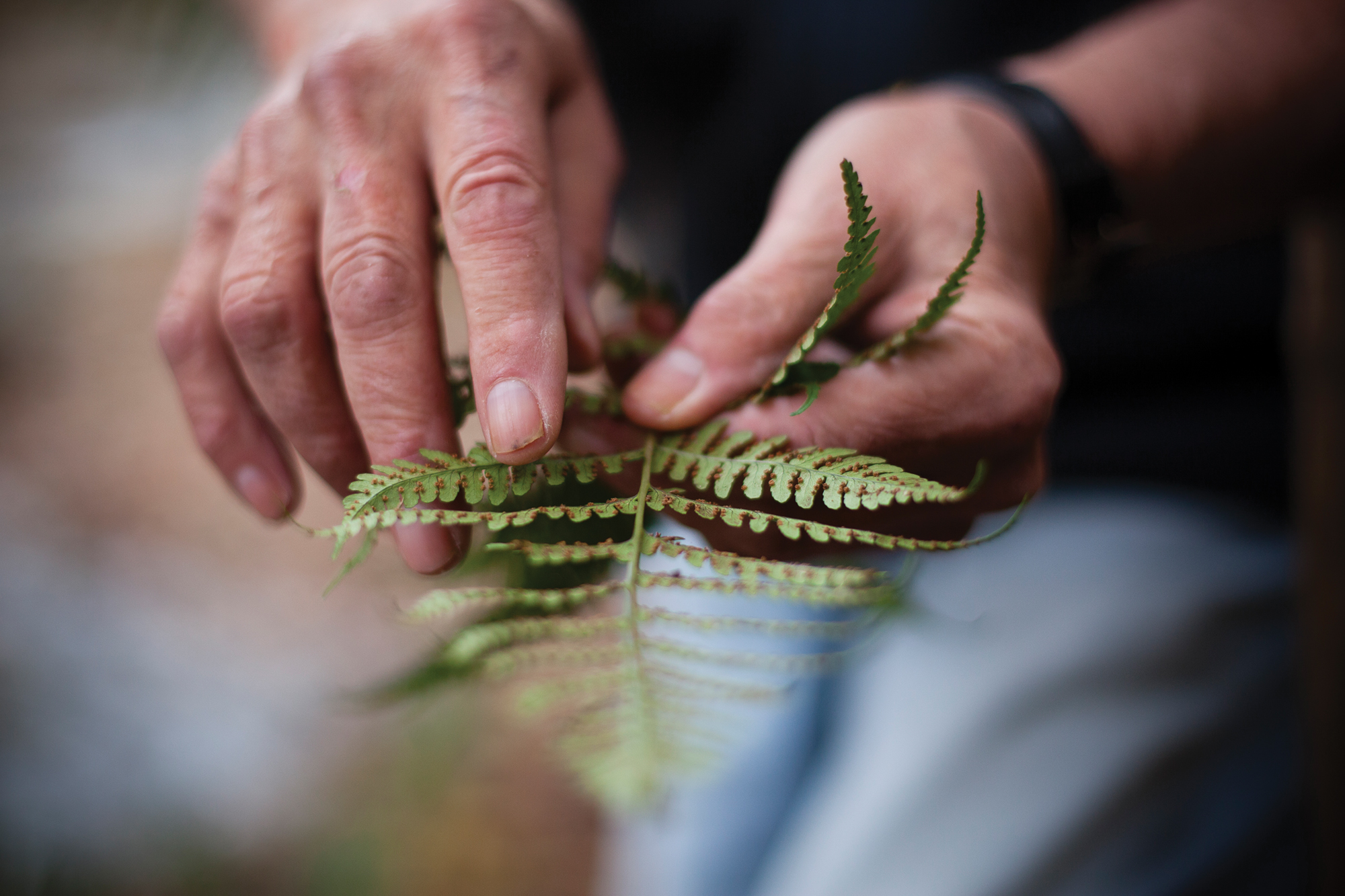 A place to compose

George had stepped away from poetry in the first place to make a living. He trained himself as a naturalist, and today, he can identify a bird by its distant call and name a tree from one side of the riverbank while standing on the other.

He leads workshops on natural and human history, and he writes a weekly “Nature Journal” column, illustrated by Elizabeth, for the Asheville Citizen-Times. Topics range from “the beauty of the box turtle” to the “obsessional activity” of chipmunks in the fall.

He receives letters every week in response to the column. Two of the past week’s letters are open on his kitchen table — one from an inmate at a state correctional institution, the other from an aspiring poet. They are fans, as many people in this part of the state are. Though George is less known outside western North Carolina, the reverence for him here is unmistakable.

But at the heart of all this work is the poetry. Walking through the woods outside his house leads to a discussion about reproductive spores on fern fronds. He explains how a fern has both a predetermined form and a “predetermined disposition” — as though he were talking not about a plant, but about a pet bird or some other animal with curious habits.

“There is something magical about ferns,” he says, bending gingerly and leaning on a knotted walking stick, pinching the leaves of a fiddlehead with his thumb and forefinger. In the silence that follows, one wonders if he is composing.

George makes this walk as often as he is able — several times a week, sometimes more. He descends the wooden steps of his front porch, walks past a bright butterfly garden to enter the dark forest beyond. The path follows a creek that winds through his property, and as he shuffles his feet, he crushes leaves and rolls his sneakers over thick tree roots. He rounds a bend and walks through the mouth of a rhododendron tunnel to arrive at his desired spot: a bench, made of wood plank upon cinder block, overlooking the creek bed.

He will sit here. Listen to water against rock, the pileated woodpecker, the sound of his breath as it rises to the trees, and he will clear his mind. Perhaps he will jot a note in his journal. Perhaps not.

But he will make room, and he will wait for the poetry. 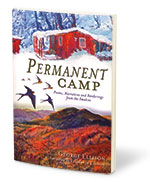 George Ellison published his most recent book, Permanent Camp, in 2012 with The History Press. The collection’s title comes from Southern writer Horace Kephart’s book Camping and Woodcraft, and is also the title of the first poem in Ellison’s book. The volume offers a unique blend of geography and history, poetry and prose, as well as Elizabeth Ellison’s colorful illustrations, to orient the reader in this wild, stunning region. In Permanent Camp, poetry is a field guide for exploring the Ellisons’ corner of Appalachia.