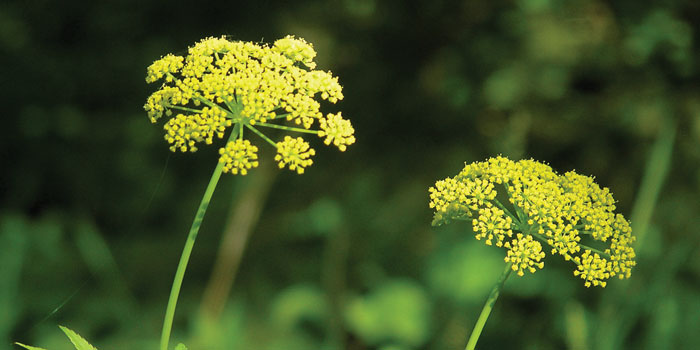 Golden Alexanders is a member of an elite club.

The native plant is the current North Carolina Wildflower of the Year. Every year since 1982, the North Carolina Botanical Garden and the Garden Club of North Carolina choose one wildflower to represent the state for 365 days. Golden Alexanders has to serve a one-day extension. Leap year.

The list of past choices reads like a box of crayons: black-eyed Susan, blue wild indigo, green-headed coneflower, Eastern silvery aster. But golden Alexanders, or Zizia aurea, is the only name that promises gold.

It needs the sun to bring out its namesake hue. It grows along roadsides and power lines, taking advantage of cleared areas, making the most of tree removal.

As it soaks up the sun, golden Alexanders sends out 10 to 18 rays that produce tiny, golden flowers. The flowers form a flat-topped circle. The circles look like coins.

Those coins will be more plentiful next year. The North Carolina Botanical Garden sends seeds of its Wildflower of the Year to anyone who asks for them. It ships them out in a packet with a pamphlet. And people plant them. And they grow.

After all, the goal of being in that elite club is to become more common.

Someone nicknamed golden Alexanders “yellow Queen Anne’s lace.” But it’s not. The two plants are part of the same family, Apiaceae, but they come from different continents. One native, one foreign. Queen Anne’s lace is now common in the Southeastern United States, and no one seems to mind. It isn’t invasive. It doesn’t change the soil. It’s one of those relatives that’s welcome to stay awhile.