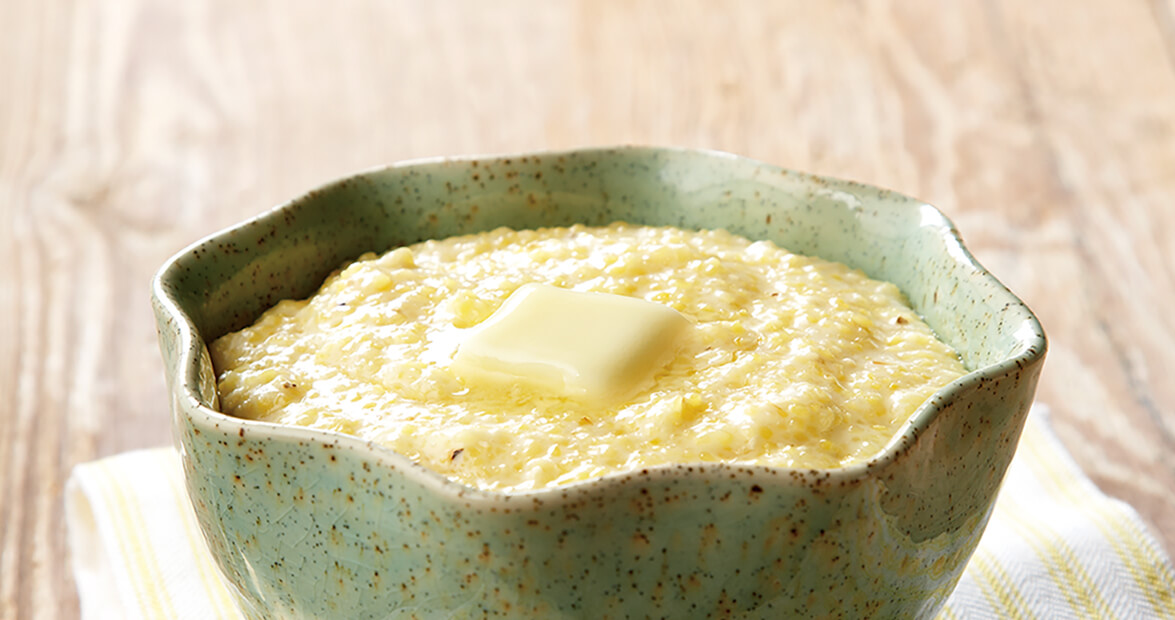 Grits double dare us to like them. They don’t look or taste like much when you don’t fix them right. They need defending from the uncharitable things said by people who got off on the wrong foot with grits. Ah, but when a freshly-cooked pot of high-quality grits are dolled up with butter and enough salt, it’s easy to see why they’re peerless on a North Carolina plate. In the right hands, grits are full of promise and potential.

I learned to fix a proper pot of grits at a fairly early age. The same wasn’t true of my best friend. In middle school, when weekend sleepovers at her house were a common occurrence, I was usually the one to cook breakfast for us. One morning, I started a pot of grits and then went back to her bedroom to roll up my sleeping bag. While I was out of the kitchen, my friend looked into the pot and concluded that there weren’t enough grits in the water. Her reasoning — or so she said later, during the inquisition from her mother — was that if we wanted four cups of cooked grits, then we needed four cups of raw grits at the get-go, so she poured in the rest of the bag and cranked up the heat.

I did not get to witness what happened in that pot. I also did not get to hear the rumbling sounds made by the Krakatoa volcano when it started to erupt, but I imagine it wasn’t unlike the noise that pot made when the lid blew off and the grits hit the fan.
When I ran back into the kitchen, grits were spewed everywhere: in the light fixture, down the heat registers, into the open cabinets, and layered so even and thick on the wall behind the stove that it looked as though they’d been spread with a trowel. If you think dried grits stick fast to an unsoaked, empty pot, imagine how they cling to a brick ranch house. My most salient memory of that morning was standing in my friend’s driveway, washing grits out of the window screens with a garden hose.

Aside from matters of measurement, the key to good grits is good grits — fresh, stone-ground, whole-grain, and made from local corn. A thriving gristmill was once a strong predictor of a growing local economy, and community planners usually built gristmills before schools and churches. Townships bloomed around them, and roads radiated from their sites. A few historic water-powered gristmills still turn in our state: the Old Mill of Guilford in Guilford County, Dellinger Grist Mill in Mitchell County, Mingus Mill in Swain County, and Linney’s Mill in Alexander County. They’re often picturesque, sitting alongside the millponds, swift creeks, and natural waterfalls that turn their works. Heavy millstones waltz the corn into grits to the tune of the babbling water. Thanks to the availability of stone-ground grits sold by the sackful on-site at these mills and in our local stores, no Tar Heel is farther than a short drive and wise purchase away from the real deal.

I’ll admit that it takes longer to cook these traditional grits than it does to dampen instant grits, but it’s time well spent. When slowly simmered and attentively stirred, stone-ground grits are creamy, chewy, nutty, earthy, and delicious. Instant grits have been stripped of their hull and germ, which means they’ll cook up quickly, but it also means they’ll turn out insipid and slick, which isn’t what we seek in a bowl of grits. There’s not enough cheese and hot sauce in the land to prop up that stuff.

Atkinson Milling Co. • Selma
The mill’s been open since 1757; the grits have only gotten better with time.