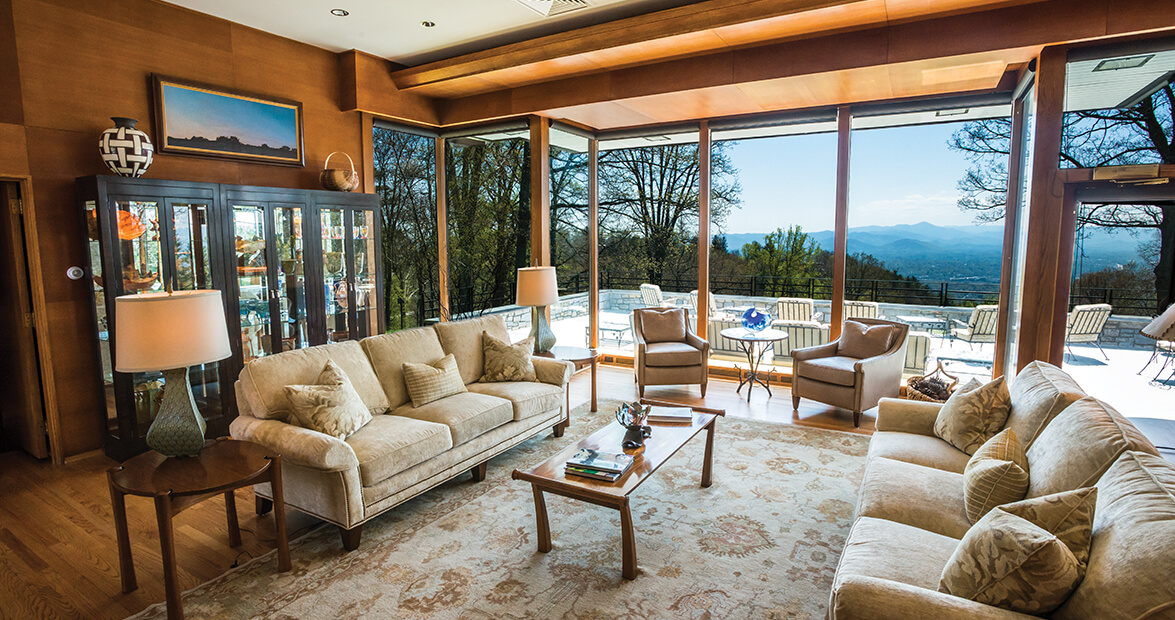 The sign is almost imperceptible, situated just two turns off College Street — that is, if you’re headed away from downtown Asheville. With white lettering against a brown background, the words read simply, “Governor’s Western Residence.”

The marker shares the look of those denoting state parks or cultural attractions, and yet the words do little to reveal the treasure that lies just beyond. Nor does it do much to intrigue. Perhaps that is why, after rounding nearly a dozen curves in the nearly 3,200-foot ascent to the top of Town Mountain, the N.C. Governor’s Mansion in Asheville so endears itself to those who drive through its iron gate and step foot across its stacked-stone threshold.

Hidden in plain sight, the Governor’s Western Residence (GWR) occupies 18 acres of lush mountainside. Through the years, the home has been used by governors and other state delegates, but also by evangelist Billy Graham, former U.S. Representative Gabrielle Giffords, and various garden clubs, libraries, and school systems. Yet the estate, with its well-worn wooden game tables, rustic artwork, and mountain-themed furnishings, is almost entirely unknown elsewhere in North Carolina.

Even those with Asheville in their backyards, when they learn of the state-owned mountain home, often raise an eyebrow and ask: But, where?

View with a room

“You can see Mount Pisgah on a clear day,” says Kaye Myers. It’s a particularly hazy morning, and she stands in the main-level living room of the Western Residence.

Myers is the former chairwoman of the nonprofit board that oversees operations and fund-raising for the home, with its modest design and tasteful décor that reflects all things western North Carolina — from Cherokee baskets and handcrafted ceramics to botanical curtains and iron sculptures.

Decades earlier, when Myers’s children were young, she lived just down the street from the state property, and she found herself on snowy mornings calling her kids’ school — at the bottom of the mountain — to see if class was in session. (It usually was.) The reason? A blanket of snow in her yard seldom meant the same for those a couple thousand feet below. Life on the mountain is only minutes from downtown Asheville, yet it is far enough removed to have its own weather patterns.

These days, Myers oversees the day-to-day operations of the Western Residence. The residence itself includes the contemporary 6,000-square-foot, split-level home; a rock-and-wood barbecue pavilion that was added in 1993 by Governor Jim Hunt’s administration; and a parking lot that accommodates about 40 cars.

The rest of the property showcases Western North Carolina as it was intended to be: a little wild and a lot beautiful. A wall of rhododendron lines the front drive, while an heirloom-daylily garden has been a pet project of many a first lady. The overall operation of the Western Residence, including the tone and style of its interior and surrounding grounds, is the responsibility of the first lady. Family photos of all the administrations who have served since the 1960s hang in the front foyer, from Terry Sanford and Dan Moore to Beverly Perdue and current Gov. Pat McCrory.

Though the furnishings are simple, the views from the residence astonish. In the main-level living room, a giant stone fireplace encompasses the front wall, and a panel of plate-glass windows and doors overlooks a large patio to the back. Beyond that patio is the jewel of this place: a sweeping view of Asheville, including downtown, the West Asheville Bridge, and Great Smoky Mountains National Park.

Of the two main-level bedrooms, one is a master suite that shares these grand views. The other is a simple guest room with two twin beds and a small bath with 1950s-era black-and-white tiling. Downstairs, a wood-paneled living room and fireplace offer cozier den-style lounging, and a split-level below that is a conference room and housing for the officers who accompany the governor during his travels.

Even the most formal of all the rooms, the main-level living area, is full of homey touches, including a small game cabinet that contains more than a dozen old favorites. It makes one wonder how many governors have touched the Monopoly top hat or played Colonel Mustard with the lead pipe in the ballroom.

The mountain house was built in 1939 by Washington, D.C., resident Tom Briner, owner of Good Humor Ice Cream. The property changed hands once more before Earnest A. (Pat) Hamil bought it. The running joke, Myers explains, is that the home was bought and donated to the state as an incentive to nudge legislators out of Raleigh and lure them into the Western region, in hopes of improving the roads here.

With the help of the Asheville Chamber of Commerce, the estate was donated to the North Carolina Council of the State in 1964. It has been used through 11 administrations. But just as important, the home now plays host to dozens of civic organizations throughout the year. Groups can rent the facility for four hours at a time, starting at a cost of $125.

No weddings. No private parties. No liquor.

Of equal importance to those who maintain the home is the fact that no state money has been used to furnish the residence, or to decorate it. From its artwork to its furniture and electronics — nothing has been purchased by the state. Instead, the nonprofit, 15-member GWR Association collaborates to do everything from hanging artwork and stringing Christmas lights to gardening and decorating.

“For me it is a connection to our government and symbol of pride in the west,” says Yona Wade, who has served on the Governor’s Western Residence board of directors since 2008. “It is a place to showcase North Carolina’s rich heritage and a wonderful place for North Carolinians
to enjoy.”

Wade has called the state home for most of his life, having lived in Statesville, Winston-Salem, and Cherokee, but until he was asked to serve on the board, he never knew that something called the Governor’s Western Residence existed.

“I may not have known about the residence prior to the board, but I have grown to love the place and what it represents,” he says.

The Governor’s Western Residence is one of five or fewer state-owned second homes in the nation. Seen as a luxury by some, many more view the retreat as a testament to the state’s heritage, particularly its Appalachian roots. Throughout the home, every sculpture, musical instrument, pillow, lamp, and painting has ties to a regional artist.

The art is displayed for the enjoyment of sitting and past governors, as well as cabinet secretaries and other visiting dignitaries. Former U.S. Representative Gabby Giffords, who was shot and seriously wounded in Arizona in 2011, stayed here with her staff of medical professionals while she went through rehabilitative treatment with an Asheville-area physician.

“When you look at this house, and look at the beauty of this place, and you know how many governors have spent time here with their families, how many important meetings have been held up here, it draws people,” Myers says.

If you’re keeping count, which the staff at the Western Residence does, the home plays host to between 8,000 and 12,000 visitors a year.

Not including the bears.

Black bears. Usually with cubs. Former Gov. Beverly Perdue encountered a handful of them one morning while walking her dogs, recalls Joe Haney, a lead corrections officer who oversees inmate labor at the residence. When Billy Graham held a staff retreat here one year, six bears showed up for a visit, Haney says, scrolling through his cell phone to show some photos he shot of the bears. There are also white squirrels. The squirrels are so white, that it looks almost like plastic shopping bags have floated into the tree branches.

State money pays for basic staffing. The residence is maintained by the Department of Corrections; inmate labor handles grounds and general upkeep at the home; and it has a full-time manager and an assistant. The Department of Cultural Resources Western Office coordinates scheduling of the Western Residence with various civic groups.

But that is where the state dollars end. All major funding comes from private donations and corporate sponsors — regional folks who have an interest in maintaining a prestigious landmark. Banks, utility companies, local government groups, and economic development organizations are among the supporters.

And artists, who have been solicited by either the Governor’s Western Residence board or other friends of the residence, have donated all the artwork, decor, and furnishings found in the home. A curio cabinet in the main living room showcases many of these pieces, but far more can be found hanging on walls, sitting on bookshelves, and placed on end tables throughout the residence.

“The artwork and the crafts make it special,” Myers says. “It makes our residents aware and familiar with the diversity of talent we have in western North Carolina.”

Western Residence
The Governor’s Western Residence holds two open houses a year, one in summer and one during the holidays. For more information, visit nccultureevents.com.