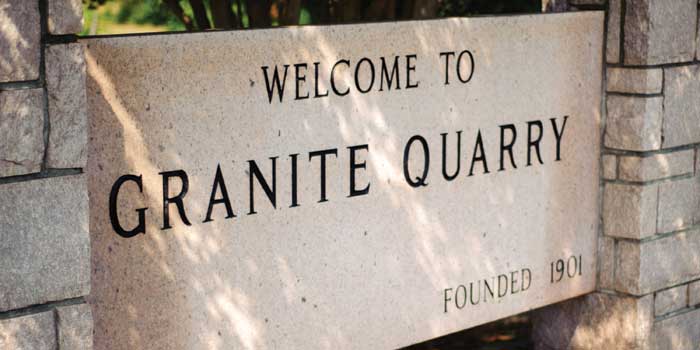 Granite Quarry native Ralph Walton assures me, in the manner of one of those confident old-timers who knows his way around town without even having to think about it, that I’ll have no trouble finding my way to the upcoming meeting of the Granite Quarry Civitan Club.

“You can’t miss it,” says Walton, the club’s president, but I’m dubious. In my experience, even in small towns such as Granite Quarry — maybe even especially in small towns — I’ve often missed it. On this evening, though, Walton’s directions are spot-on. The landmarks make it easy.

First, coming from Salisbury, as I reach the edge of town on U.S. Highway 52, I’m greeted by the large, granite “Welcome to Granite Quarry” sign, erected by the Civitans 20 years ago. (There’s an identical marker on the opposite end of town, welcoming visitors from the other direction. The Civitans put that sign there, too.)

Then I pass the Municipal Building, where the Civitans placed a large community bulletin board in 1995. This sign tells citizens about upcoming events, such as the Civitans’ annual Fiddlers’ convention, which raises thousands of dollars for the club’s many community-service projects. At other times, citizens use the board simply to share a good word. On this particular evening, the sign encourages passersby to “Seek Out the Good In People.”

I turn at the next stoplight, which happens to be the only stoplight in Granite Quarry (not counting the one folks in town refer to as “the blinker” back down the road). Cross the railroad track, make a couple of more quick turns, and I find myself at Granite Civic Park, a quintessential community park the Civitans helped build more than 60 years ago. Adjacent to the park stands the Granite Quarry Community Building, my destination, which was built by –– no, not the Civitans. The local American Legion post actually built it, but when that organization’s members grew too old and too few to maintain the building, the Granite Quarry Civitan Club stepped in and undertook a $40,000 renovation project to help save the building for the community.

“The Legion was a very big organization at one time,” Walton says, “but the younger veterans are not joining the Legion, so they don’t have but about half a dozen members that are active, and they’re getting old. They said, ‘We don’t have the money to keep this building going.’ One of the alternatives was to give it back to the national American Legion organization, but what are they going to do with it? We were afraid they’d just sell it to somebody, and they’d tear it down, and we’d lose it.”

Granite Quarry would be lost without the Civitans. Stories such as the one about the American Legion building abound in this Rowan County town of about 2,500 people. From the American Legion building to the adjacent Granite Civic Park; from the community sign to the local schools; and from the community’s Special Olympics all the way out to the granite welcome signs on either end of town, Granite Quarry Civitans have left their fingerprints — not to mention hard-earned sweat marks — all over town.

Now an international organization of volunteer service clubs, the Civitans first became a service organization in 1917, when a group of altruistic businessmen founded the group. The Granite Quarry Civitans, chartered in 1945, began with 54 men, a large number considering that Granite Quarry in the mid-1940s was even smaller — much smaller — than it is today. The last living charter member, Claude Lyerly, turns 100 this month. The club is planning a big shindig to celebrate its 66th anniversary and Lyerly’s 100th birthday. Lyerly had more than half a century of perfect attendance until a few years ago, when he fell and broke his hip. He’s back now, working on his next 50 years of perfect attendance.

“Claude never misses a meeting,” Walton tells me. “He has a nephew who brings him to all our meetings, and his nephew said he doesn’t have a choice because Claude always calls him and wants to know what time he’s picking him up. He’ll be here tonight, and he’ll have his Civitan cap on when he comes in the door, I can almost betcha, because he is Civitan.”

Sure enough, a few minutes later, an elderly gentleman walks in slowly, wearing a wide grin on his face and a blue Granite Quarry Civitan Club cap on his head. Claude Lyerly, present and accounted for.

Lyerly still remembers those early days when the club was formed. “We started out with about 50-some members,” he says. “We went to about every man in Granite Quarry, and that’s about how many joined. There were very few men that didn’t join the Civitans in Granite Quarry.”

A vintage photo from the charter ceremony, held in the gymnasium at the old Granite Quarry School, shows the new members gathered beneath a basketball goal in the gym, posing in their coats and ties. It’s doubtful they knew much about the organization they had just joined, but they were about to take off their coats, roll up their sleeves and find out. Sixty-six years later, Claude Lyerly has it figured out: “We give a lot of money away,” he says, “and we do a whole lot of work.”

They always have. Right after being chartered, the club took over sponsorship of Boy Scout Troop 379 and built the boys a hut. In the early 1950s, the club bought instruments and uniforms for the band at Granite Quarry School and even paid the director’s salary. The club, in cooperation with the PTA, also bought the school an activity bus for the band and sports teams to use.

Lyerly, no doubt, contributed to many of those projects. So did his longtime friend, 79-year-old Don Livengood, who joined the club 52 years ago and has chaired its major fund-raiser, the Granite Quarry Civitan Fiddlers’ Convention, for decades. “Without the Fiddlers’ Convention and the barbecued chicken” –– that the club cooks and sells at the music festival –– “we wouldn’t be able to support all the different projects we do,” Livengood says.

The first year of the convention, 1967, when most members didn’t even know what a fiddlers’ convention was, the club made all of $300 on tickets, and $33.80 on food sales. Nowadays, if all goes well, the fund-raiser can bring in close to $10,000, which goes a long way toward funding Civitan projects.

Sometimes, club members take on projects that are less visible than, say, a Scout hut, a baseball field, or a granite welcome sign. Walton remembers last year’s Christmas get-together, for example, when club members brought donations to sponsor a local family — a single mother of two who lost her job at a nursing home.

“It ended up being the best Christmas we ever had,” Sarah Barnett says. “I couldn’t even tell you what all the kids got, because it was just unbelievable. Losing my job was devastating for me, and I’m so glad they were there to help. It was such a blessing.”

Other times, the club quietly purchases clothing or shoes for a family in need, or takes leftover food from a club meeting to the homeless shelter or to a family they know can use it.

The Civitans are in the business of making life better for everyone in the community, Walton says.

“I grew up here,” he says, “and the people in this club are people I knew, people I grew up with, and we care about this community. You know, as a society, we’re losing that [sense of community]. People move so much, and they’ve got so many other things to do, they don’t have any ownership of anything, and I guess that’s what a lot of these guys here in this club still have.”

In Granite Quarry, where there’s only one stoplight, the Civitans know who owns their community: Everybody. Take a look around. As Walton likes to say, you can’t miss it.

Jimmy Tomlin lives in Greensboro and is an award-winning features writer for The High Point Enterprise. Jimmy’s most recent story for Our State was “The Old-Hand Way” (December 2009).