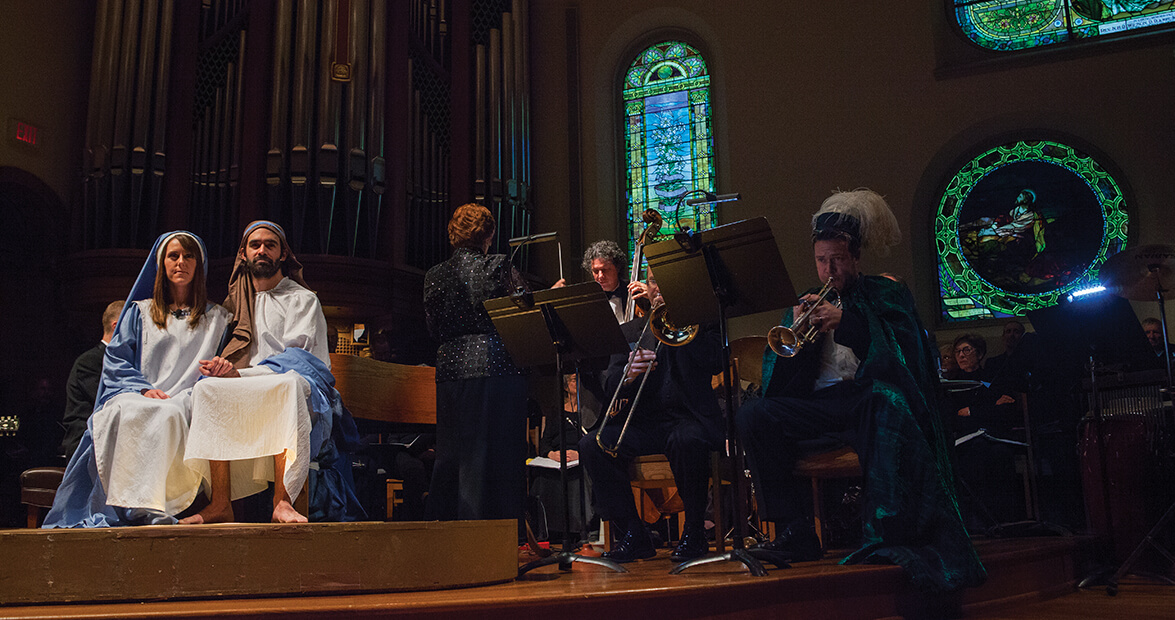 And though Mary’s gaze is serene, by the time the three kings arrive, she’s succumbed to unobtrusive toe-tapping beneath her blue-and-white gown. It’s hard to resist a lamé-clad king wearing tap shoes who’s shuffling off to Buffalo — Bethlehem, rather — when he’s backed up by a trumpet, a trombone, a sax, and a snare drum.

Traditional with a twist: This is the annual Jazz Nativity, performed by singers, dancers, and musicians at the West Market Street United Methodist Church in Greensboro. With its improvisation, humor, and exuberance, the show appeals to non-worshippers as much as it does churchgoers seeking seasonal inspiration.

Talk about your unique retelling of an ancient tale. More than two millennia after Jesus was born, “Bending Towards the Light: A Jazz Nativity” was born in New York City in 1985 as a Christmas benefit show. John Gensel, the “jazz priest” of St. Peter’s Lutheran Church, asked composer Anne Phillips to write it. Jazz greats Dave Brubeck, Clark Terry, Gene Bertoncini, and Maeretha Stewart were a part of that initial performance. Eventually, it moved to St. Bartholomew’s Episcopal Church, where people lined up on Park Avenue in frigid weather to see it — or to be turned away for lack of seating. And on to Lincoln Center, Orchestra Hall in Chicago, and even New York’s Stephen Wise Free Synagogue. Yes, synagogue.

It’s theater. No, it’s a pageant. No, it’s a chorale presentation. No, it’s a musical concert. Close your eyes, and you’re in a nightclub, at a small table with a telephone and a shaded light and a martini. A playful, flirty rendition of “What Child Is This” tickles your ears. Schroeder at his piano in A Charlie Brown Christmas comes to mind, or Woody Allen at The Carlyle hotel bar.

But this is a Methodist church in downtown Greensboro, the first church built within the city limits, in 1831. The historic dark brick building’s interior is filled with warm, honey-hued paneling and pews, and intricate stained-glass windows. How did the Jazz Nativity land in North Carolina?

“I just asked a dumb question,” answers Lacy Baynes. Baynes, 82, is a 1955 graduate of the University of North Carolina at Chapel Hill. One of his classmates was North Carolina native son Charles Kuralt, and while “he went the Daily Tar Heel way and I went the business way,” Baynes followed Kuralt’s career with CBS. “We retired the same year,” Baynes continues, and in his retirement, Kuralt wrote books. In his Charles Kuralt’s America, the author visited, and wrote about, his favorite places in the country, spending a month in each location. December was devoted to New York City, and Kuralt mentioned his time in the early 1990s narrating a Christmas jazz production called “Bending Towards the Light.”

“I thought it was the best name I’d ever heard,” Baynes says. He sent a copy of the article to Bill Carroll, the music director at West Market Methodist and a music professor at the University of North Carolina at Greensboro. “Bill liked religious jazz,” Baynes recalls, “and he said, ‘Can you get a copy of the score?’”

Then came the so-called “dumb question.” Baynes simply called Lincoln Center, the most recent performance venue Kuralt had mentioned, and explained what he was looking for. “I thought I’d have to go through three levels of agents,” he says. Instead, he was put directly in touch with Phillips, who not only sent the score, but discounted the royalty fee. The church raised funds for the initial cost. Bill Carroll used his contacts at UNCG to locate jazz musicians. And in December 1996, the Jazz Nativity was staged at the church. “At the time, it had never been performed outside of New York City,” Baynes says. Nearly 20 years hence, the show is an annual can’t-miss for both Christmas and jazz enthusiasts. Baynes hasn’t missed a single one. 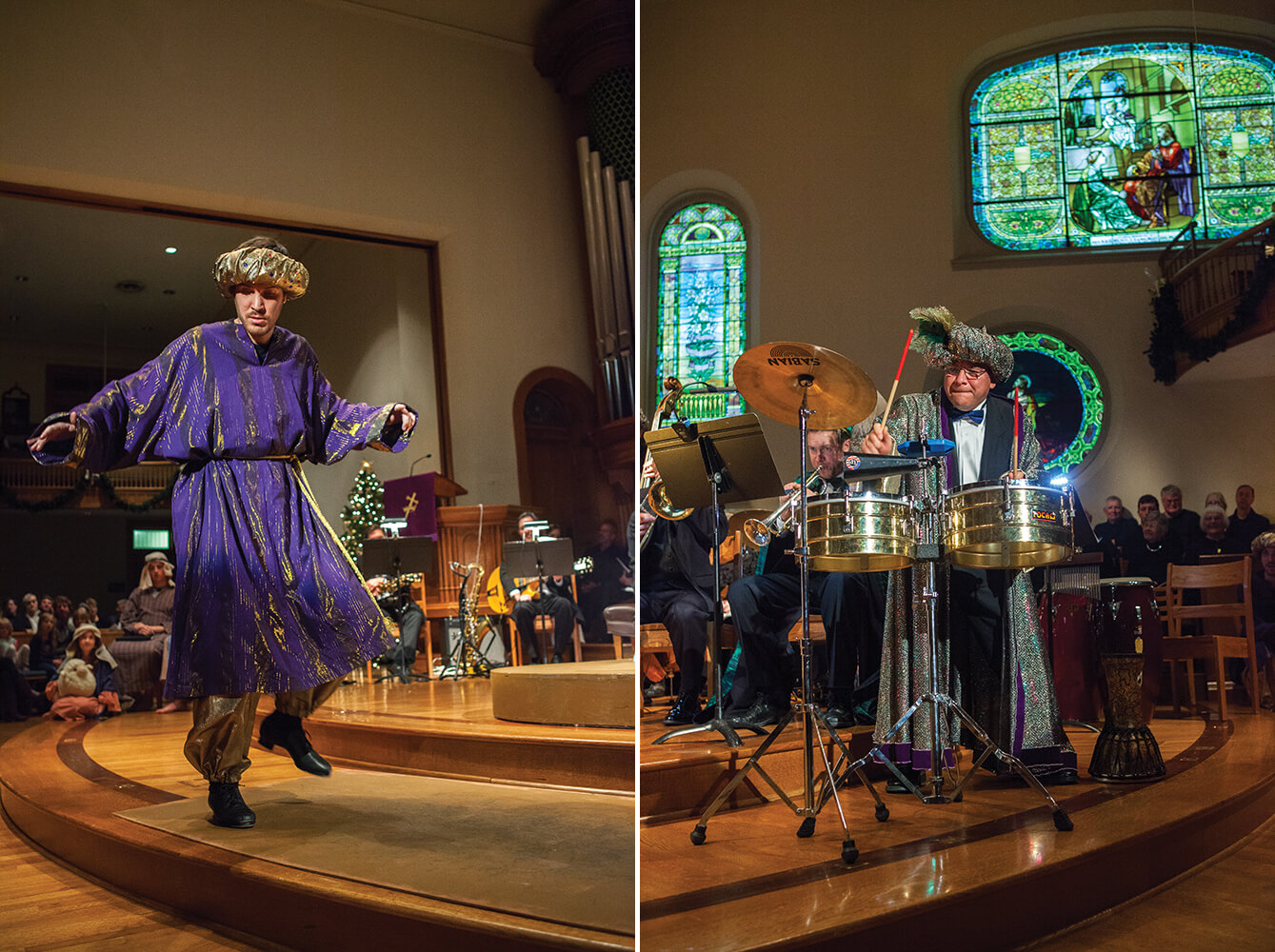 A razzmatazz version of “Deck the Halls” opens the evening. Sax, trumpet, and percussion all get their turn — producing riffs so rousing and boisterous that the audience can’t resist clapping to the beat — in a kind of overture for the birth of Christ. The familiar passages from Luke are sung, aria-style, by a soprano in the pulpit, while a choir of more than 75 — dressed in black, as all proper cool cats are — joins in. “Spirits” of Mary and Joseph dance gracefully in the aisles, telling a silent version of that night in the stable. And the original song composed for the show, “Bending Towards the Light,” is sung by a barefoot shepherd who’s all of 10 years old, reaching C above high C before a packed house, er, sanctuary.

Oh, and a little calypso accompanies the offertory, which pays for the performance. There’s no entrance fee. “The church does it for the community,” Baynes says. “The majority of the people who attend aren’t church members.” 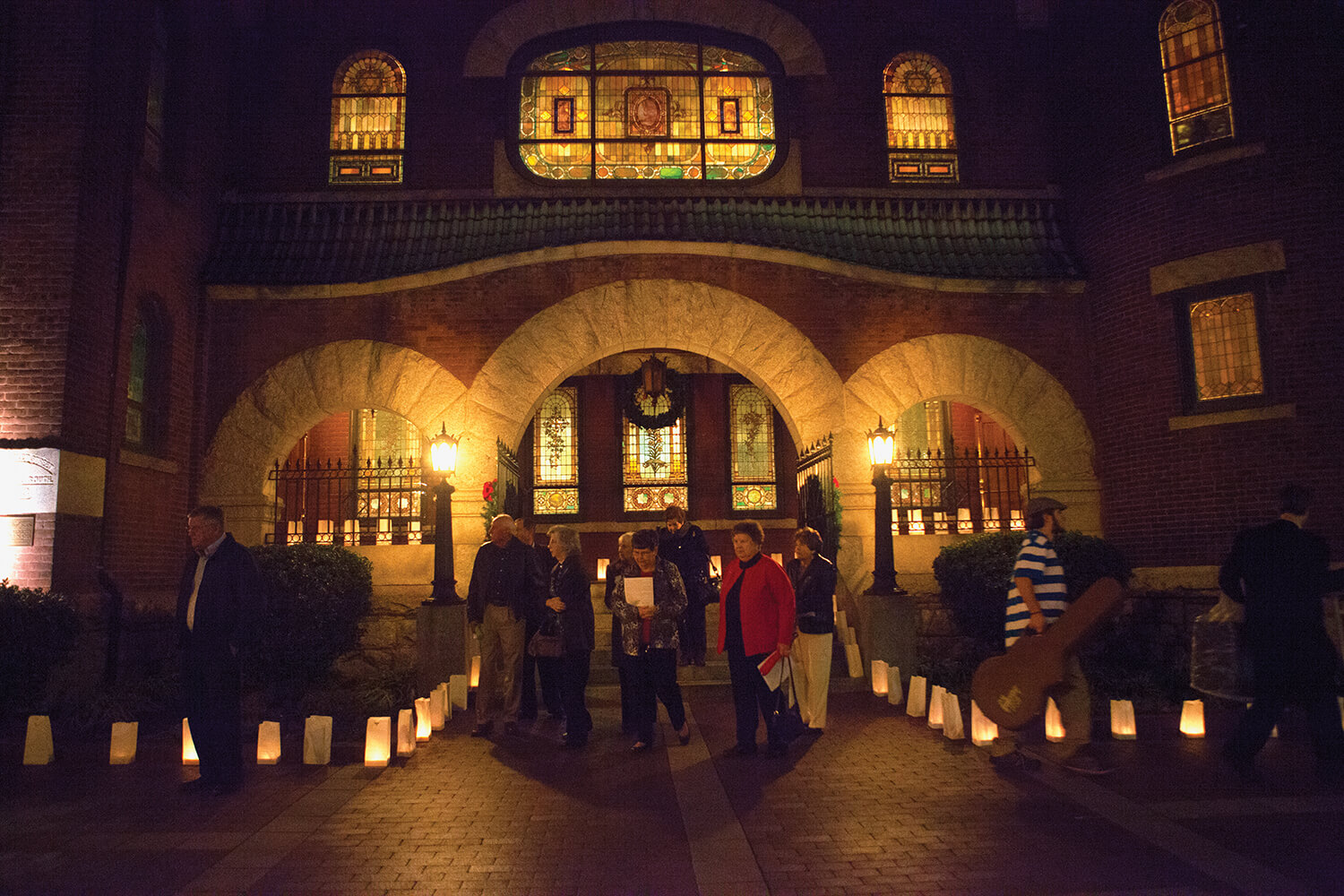 It’s difficult to single out the most memorable portion of the hour’s entertainment, during which “O Christmas Tree” and “Angels We Have Heard on High” — from rollicking to religious — coexist peacefully, just as the saxophone player effortlessly switches instruments, to clarinet and flute.

But the solo sax version of “Silent Night” is haunting, both expectant and soothing, drawing the audience into the silence, and the miracle about to be reenacted. Hearing Kenny G’s version on a CD is one thing; watching someone perform it live is quite another.

Still, those kings are something. Introduced with his own trumpet fanfare, King No. 1 is dressed to the nines in glittering harem pants and a feather-plumed crown. Snap your fingers until King No. 2 comes out tap-dancing as spectacularly as Fred Astaire. King No. 3 has a bongo drum, a snare, a high hat, and other percussion paraphernalia, drumming that not-quite-discernible rhythm of jazz percussion that sounds like he’s making it up as he goes. Instead of gold, frankincense, and myrrh, the royals come bearing infant tap shoes, a tiny trumpet, and a wee drum. Kings tend to get lavish treatment in any genre, but this interpretation of “We Three Kings” banishes the gloomy quality of that melody.

Remember what’s wonderful about dragging a piece of salty sausage through a puddle of sweet syrup? There’s something of that delicious combo in the Jazz Nativity. It’s goodness with spice. Ecumenical yet energetic. Secular but solemn. By the finale, a Dixieland jazz rendition of “Joy to the World,” people are on their feet, celebrating a rollicking good time in Bethlehem with whistles and hoots of appreciation. Luminaries light their leave-taking, and sounds of Ella Fitzgerald and Dave Brubeck echo in their heads. Or at the very least, echo in a church, on West Market Street, in Greensboro, in the December dusk.