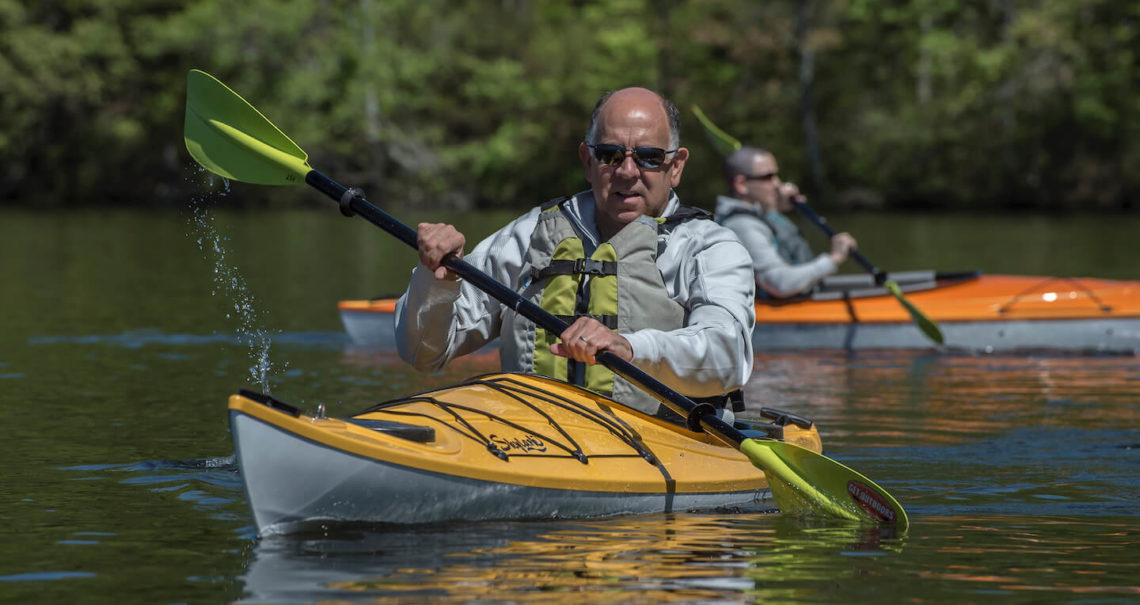 Ever since Elizabeth Jernigan hiked all 2,200 miles of the Appalachian Trail in 2004, she’s worked to build her career around what she loves most — and today, she’s the official trails planner for the City of Greensboro. “For me, the woods are a refuge,” Jernigan says. “Whether or not things are going well in my life, it’s a place I can go and reset. And when you come out of the woods, things are never as bad as they seemed.”

On the north side of Greensboro, 50 miles of watershed trails hug three lakes — Lake Higgins, Lake Brandt, and Lake Townsend — built as reservoirs in the 1920s. The trails are shaded by mature, hardwood forests. “Just 10 minutes from downtown, you can be out in the woods on these extraordinary trails with beautiful lake views,” Jernigan says.

From hiking and mountain biking to boating and golfing, Greensboro’s outdoor activities offer adventures at every turn. Read on for Jernigan and her fellow nature enthusiasts’ secrets to some of the best ways to experience Greensboro’s great outdoors.

According to Jernigan, Greensboro’s hiking trails are worth a visit year-round. “But springtime is probably my favorite season, especially for hikes with my 5- and 9-year-olds,” she says. “I love seeing all the new growth — the ferns unfurling and the turtles on the logs.”

One of Jernigan’s favorite hikes for families with young children is the Crockett Trail, which runs along the western edge of Lake Townsend. Park at the northernmost trailhead parking area, on the 5300 block of North Church Street, and look for the Peninsula Trail sign (the name was recently changed to Crockett). About a mile in and another mile out, it’s achievable for kids of all ages. “The trail is open with good views — and there are fun lookouts where you can get close to the water,” Jernigan says. “Bring binoculars so you’ll get a good view of lots of wildlife.”

Because there’s not a lot of elevation gain in the Piedmont, most of Greensboro’s watershed trails are relatively easy. What can make them challenging, in Jernigan’s opinion, is their length. The Nat Greene Trail, with its trailhead at the Lake Brandt marina, features sloping and climbing trails and unexpected visuals. “This is one of our oldest and really well-maintained trails with beautiful views of the lake,” Jernigan says. It’s a longer hike — 4 miles in and 4 miles out — so pack a picnic and plan to stay a while.

As the general manager and director of golf for both the Players Course and Champions Course at Bryan Park, there’s no question about Kyle Koll’s favorite hole. “The most scenic hole on the property is Champion’s 13th hole,” Koll says. “It’s beautiful, and almost surrounded by water.”

Both par-72, 18-hole courses received four-star ratings by Golf Digest, and as public courses, they’re treasured by Greensboro golfers. “The Players Course tends to be considered a little more player-friendly and is much easier to walk if you enjoy walking,” says Koll. “The Champions Course is on the perimeter of the park and borders Lake Townsend. It’s a little more difficult and challenging to walk, and the views are spectacular.” 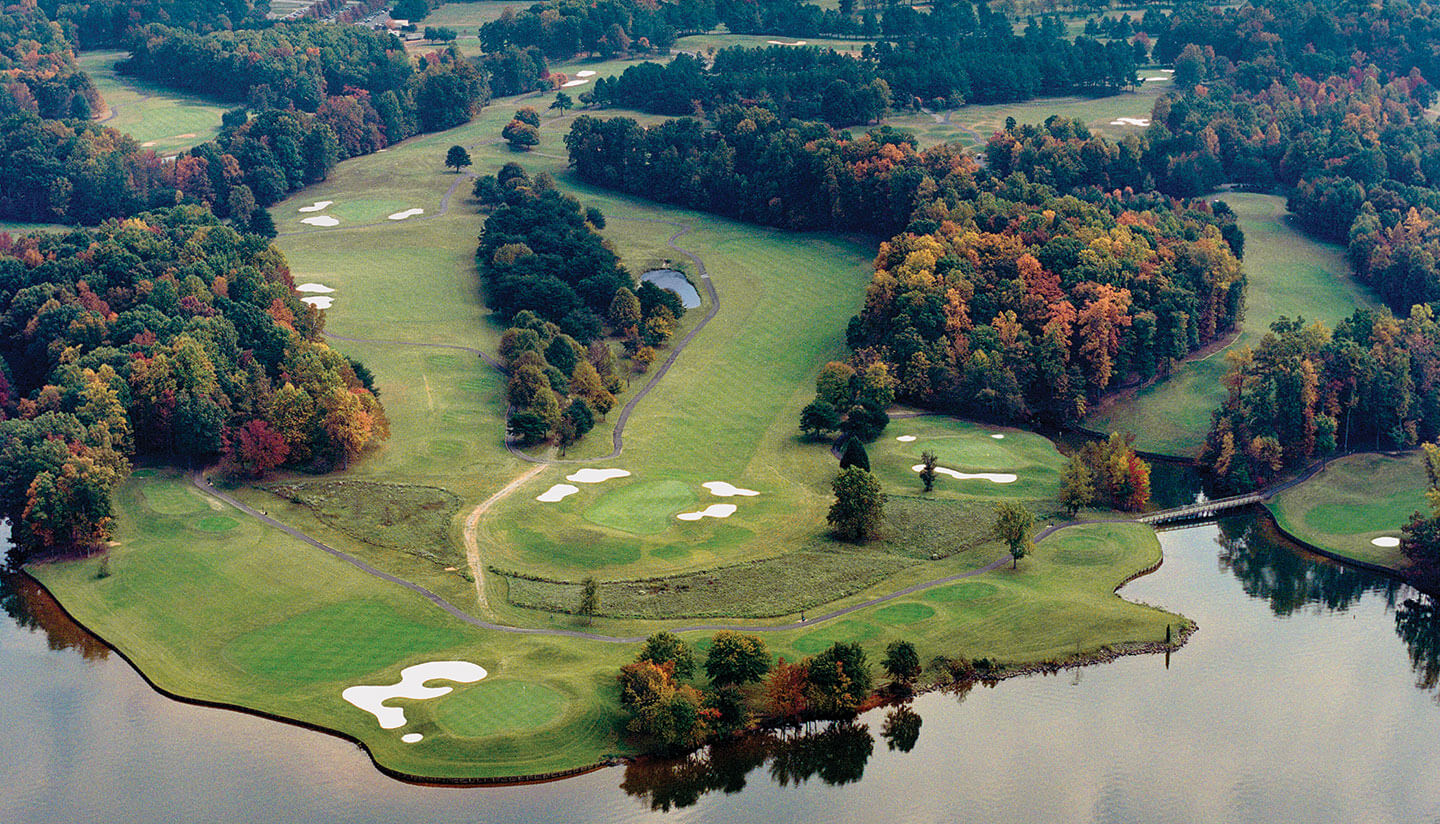 The Champions Course at Bryan Park. photograph by Visit Greensboro

At Greensboro’s Battleground Park, history and nature share the spotlight, giving visitors a serene backdrop to learn about a battle that changed the course of the Revolutionary War.

Under the leadership of Maj. Gen. Nathanael Greene, American troops lost the Battle of Guilford Courthouse on March 15, 1781. But thanks to Greene’s innovative and courageous leadership, the British Gen. Earl Cornwallis lost about a quarter of his army and a third of his officers. In response, Cornwallis withdrew to the coast, a retreat that paved the way for America’s victory at Yorktown seven months later.

When you pay a visit to Battleground Park’s visitor’s center, ask a park ranger to share a map of the park. Then set forth along the shaded footpaths and trails, which are perfect for an easy stroll through the woods.

Get out on the water

Greensboro’s three class-one reservoirs aren’t open for swimming, but they’re paradise for boating. When lake activities specialist Neil Thompson wants to take his kayak out, he heads to Lake Brandt. That’s because, at 870 acres, Lake Brandt is the perfect size for a Saturday paddling expedition. “From the marina, you can take your kayak or canoe in one of two directions: toward Reedy Fork Creek or Horsepen Creek,” Thompson says. “The ends of the lake where the river headwaters flow through are always the coolest spots. It’s more isolated where it gets shallow, and you find the most distant points where you have the lake all to yourself.”

Especially in the wintertime, Thompson looks out for a cormorant population that nests on an island in the middle of Lake Brandt. “There are so many of them that they cover the island white, like a crystal,” he says. “And around the end of April, you can spot great white egrets.”

At just 280 acres, the westernmost Lake Higgins is the smallest of the three lakes and tends to be quieter, whereas Lake Townsend, on the eastern side of Lake Brandt is the largest and the only lake open to recreational motorboats.

Home of the Lake Townsend Yacht Club, Lake Townsend has two boat ramps — one for small sailboats and the other for private boat launches — and offers sailboat rentals and sailing classes. In addition to sailing, this is your go-to destination for fishing. Cast a line for largemouth bass, hybrid bass, striped bass, catfish, and crappie. And when you’ve perfected your skills, register for the Townsend Spring Bass Tournament, held every year at the end of April.

Go for a ride

Stephen Williams, past president of the Greensboro Fat Tire Society, first experienced Greensboro’s watershed trails as a runner. “I appreciated the trails so much, and when I learned Fat Tire was responsible for maintaining them, I wanted to get involved,” he says.

For a challenging mountain bike ride, Williams recommends parking at the Lake Brandt marina lot and taking the Wild Turkey Trail to the Greenway. Hop on the Greenway to cross the bridge, where you can access the Owl’s Roost Trail. “There’s a section in that area called Shady Side, which you can take back to Wild Turkey that leads back to the marina,” he says. “Owl’s Roost and Wild Turkey are our most advanced because they’re technical, with berms and downhill runs and bridges, roots, and rocks that you have to navigate.” 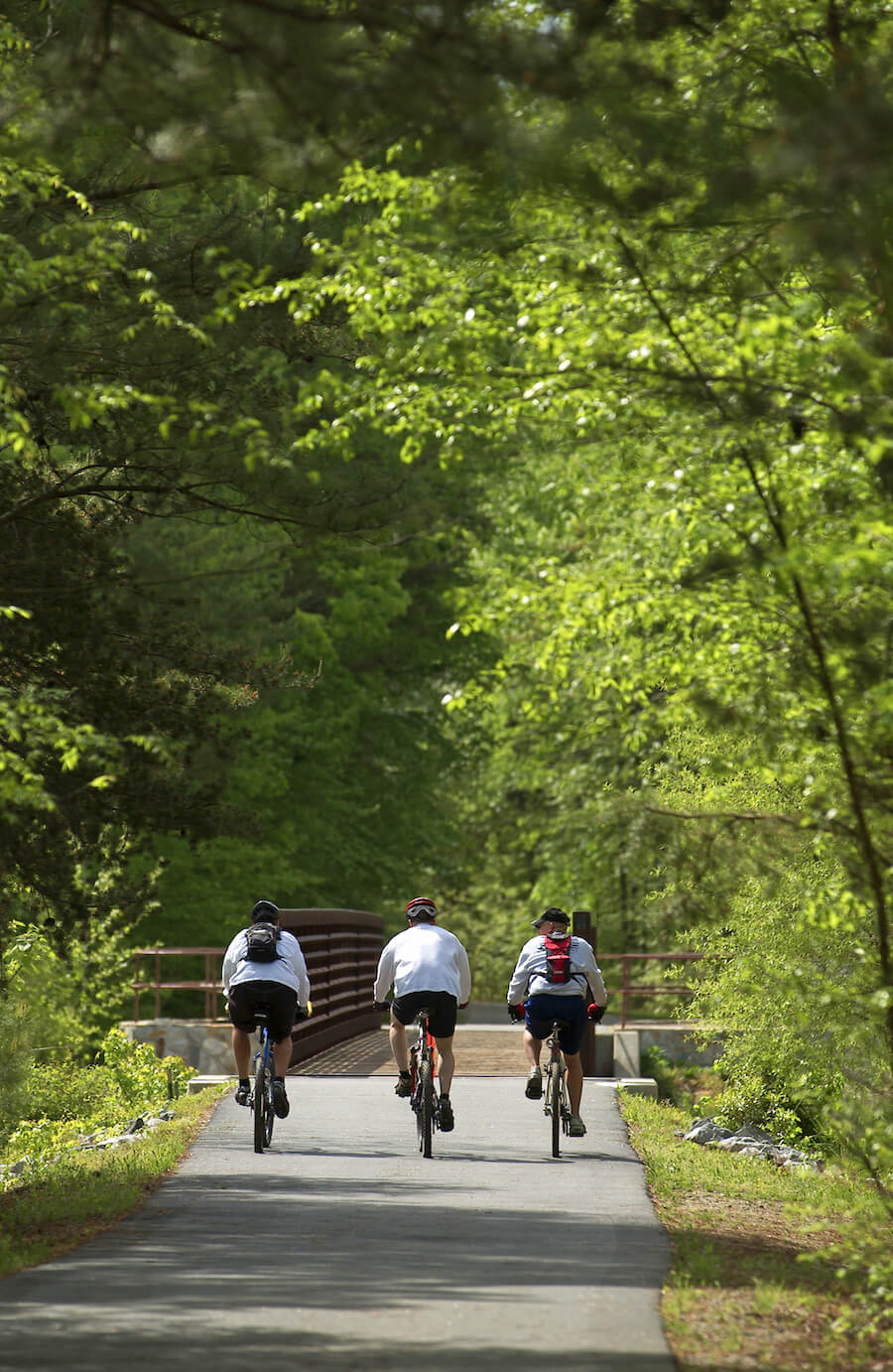 The Atlantic & Yadkin Greenway in Greensboro. photograph by Visit Greensboro

Fritz Neal, Fat Tire’s current president, adds that their society is in the process of renovating the Bald Eagle Trail to offer a great experience for beginning bikers. “We’ve rehabbed about two-thirds of the trail, including a new bypass of a section previously unforgiving even to seasoned riders,” he says.

He and Williams agree that the nice thing about Greensboro’s trail system is the connectivity. “You can string all the trails together and do a 40-plus-mile ride, if you’re so inclined,” says Williams. “To have access to that much mileage so close to the city proper is pretty amazing.”