Related: The Legacy of Greensburger Lives On: These grills and griddles have made Greensboro a burger town.

Greensboro, late 1970s. An enterprising young journalist sets out to chronicle the salacious, nefarious, and potentially felonious goings-on in the district of downtown known as Hamburger Square. The obvious place to start? Jim’s Lunch: Greasy spoon. Saloon. Crossroads of the unsavory.

So off he goes, this baby-faced reporter for The Greensboro Record, pad and pen tucked into the pocket of his blue blazer. His name is Jim Schlosser, and no sooner does he open the door to this greasy spoon than two men come charging out, nearly knocking him down. One is clearly chasing the other, and, according to Schlosser, he’s “holding the longest knife I’ve ever seen in my life.”

Schlosser, now 79 years old, happily retired, and living only six blocks from Hamburger Square, recounts the incident as though he were describing a movie scene. “Then I sat down on a stool and talked to the guy who owned the place,” he says. “He was as calm as he could be.” 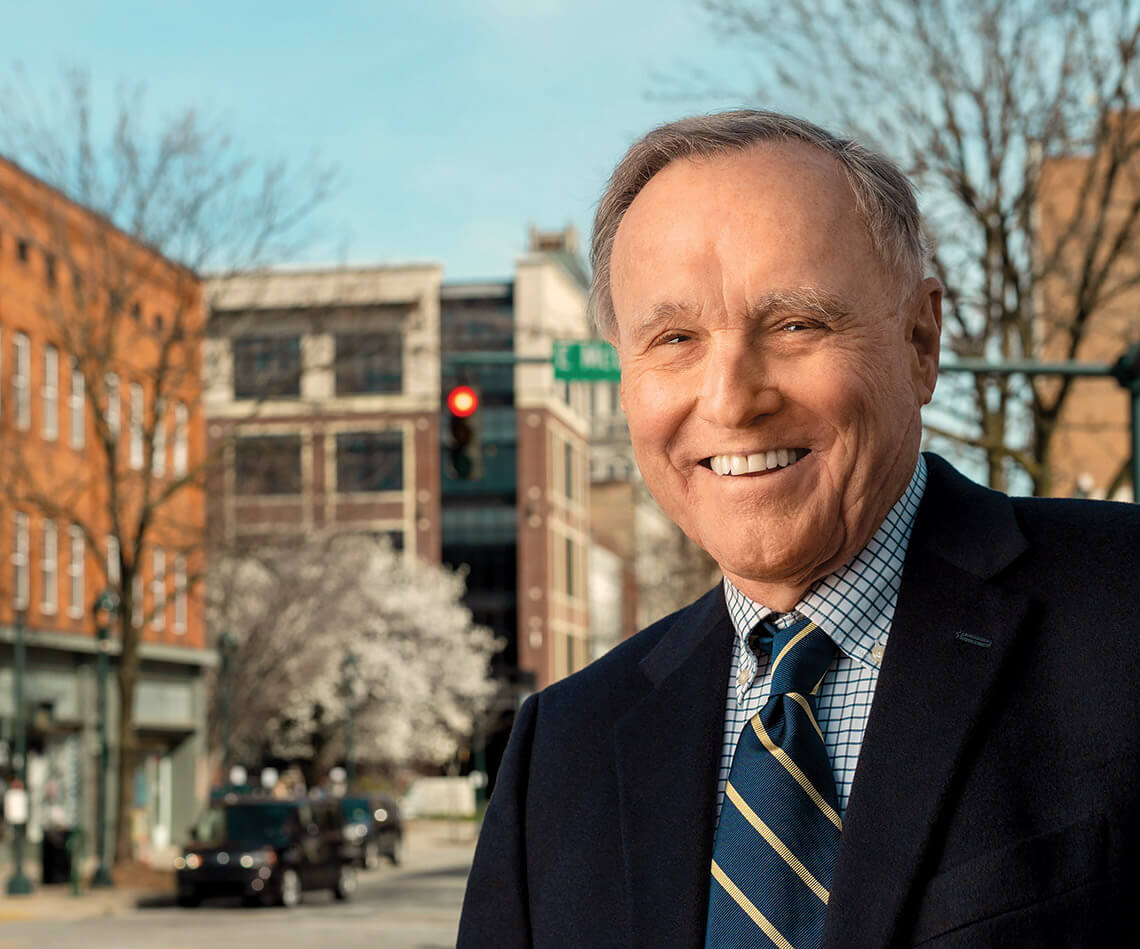 And that, friends, is the essence of Hamburger Square. Until the 1980s, the area was home to the kinds of bars, grills, and no-tell hotels that don’t get featured in Chamber of Commerce brochures. Today, it’s a hipster’s paradise, its formerly notorious corners populated by two breweries and an upscale, funky gift shop. Three of the eateries currently operating within the district’s unofficial boundaries — Natty Greene’s Downtown, Grey’s Tavern, and M’Coul’s Public House — do, in fact, sell hamburgers. But they’re honorable, upstanding burgers, the kind that arrive at your table on actual plates instead of grease-stained cardboard or wax paper, the kind that cost $8, $10, or even $12. These are not the hamburgers of the Hamburger Square of lore. Not even close.

One thing must be noted: Hamburger Square has about as much to do with hamburgers as New York City’s Wall Street does with walls, their names merely remnants of a colorful history that most residents under 40 never learned. Oh, sure, you could get a hamburger in Hamburger Square back in the day. A good one, too. The name comes from the noontime offerings at joints like Jim’s Lunch, the California Sandwich Shop, and other diners and dive bars over the years. But for eight or nine decades, the mention of Hamburger Square to a local conjured images of something other than ground beef, mustard, and a buttered bun.

“These weren’t respectable establishments,” says Schlosser, who exited Jim’s Lunch to spend three more decades documenting Greensboro’s past and present for the newspaper. “These were joints.”

It’s hard to describe a place like Hamburger Square in the language of 2022, says Randy Barnes, a Greensboro native who, in 2013, photographed and reviewed one local hamburger every week for a year at HamburgerSquare.com, his now-defunct blog. Point well taken. Many of the things that gave the square its character are now rightly considered part of our social ills, not matters that deserve scorn and ridicule.

In its prime (such that it was), Hamburger Square’s reputation by far surpassed its real estate. It sits on the south end of downtown where South Elm and West McGee streets meet, bordered by railroad tracks to the south and the more upstanding — at least in years past — Jefferson Square three blocks north. One small city block, with its essence extended to a few buildings in each direction. Until the 1920s, the city’s train depot was there, resulting in the near-constant flow of travelers who might need an inexpensive meal, a cheap hotel room, and, potentially, the company of a woman. A woman … for hire. Those could be found in the hotels above Jim’s Lunch and the California Sandwich Shop. The combination of prostitutes, itinerants, and ne’er-do-wells milling about made the square feel more like an Amsterdam-esque red-light district than the family-friendly dining and entertainment hub that it is today. 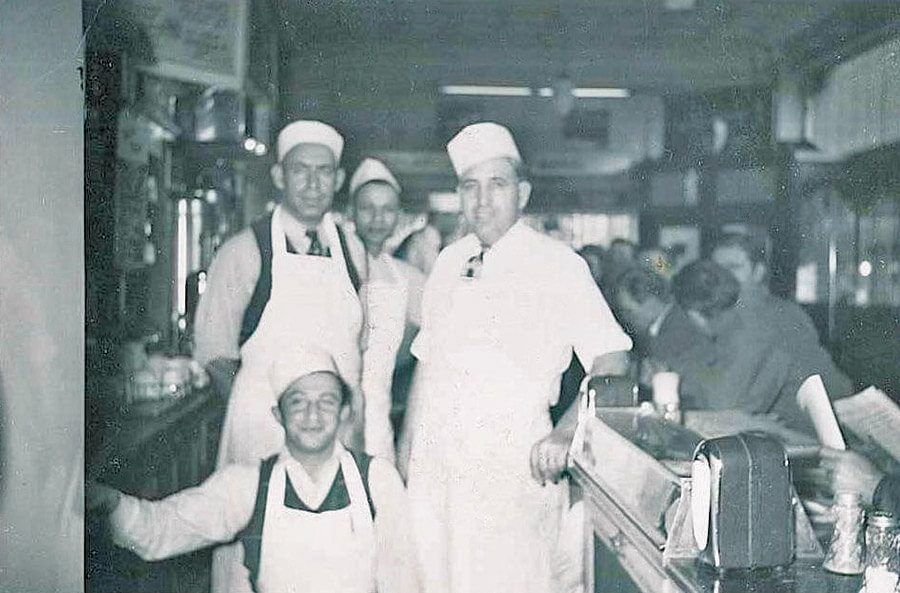 Back in the day, Greensboro residents never knew what mischief they might encounter at the infamous Jim’s Lunch. Photography courtesy of JIMMY SIPSIS

Barnes, who came of age in the 1960s and ’70s, remembers the square more charitably. It was a place where the poorest people could get a bite for cheap, but also “a hard place in the road,” says Barnes, whose family history in Greensboro dates to the Civil War. “Hamburger Square was a derogatory thing,” he says. “It wasn’t a ‘Hey, let’s go get a hamburger’ kind of place.”

Schlosser, himself a fourth-generation resident, values Greensboro’s uniqueness perhaps more than anyone alive. His grandfather managed a general store on South Elm Street, just off the square, and in the late 1940s and early ’50s, little Jimmy would visit often, absorbing all the sights, sounds, and smells for future reporting. The restaurant windows, he says, were perpetually steamed up from the heat rising off hot dogs and hamburgers. And the smell of cigars “wafted over the square at all hours,” most likely from the El Moro Cigar Co. factory behind Jim’s Lunch.

The adult Schlosser took every opportunity to document Hamburger Square as a journalist and the city’s unofficial historian, most memorably in an essay for 27 Views of Greensboro, a 2015 collection of prose and poetry celebrating the Gate City. He did so most waggishly in the full-page spread that the Record published shortly after his visit to Jim’s Lunch in the ’70s. “Once-elegant section now winos’ world,” the article announced at the top of the page, daring right-minded readers to venture into the bad part of town. These “men suffering from chronic and untreated alcoholism,” as the newspaper might refer to them now, had a pecking order of sorts. As Schlosser remembers 40-some years later, one of the men even considered himself the mayor.

Around the time when little Jimmy Schlosser was wandering Hamburger Square, a young Milton Kern was growing up 50 miles away in Montgomery County. His contractor father, who frequently traveled from Star to Greensboro for business, often mentioned eating lunch in the square. Roughly three decades later, in 1981, the younger Kern bought his first local property just a few blocks away, on South Elm Street. Since then, he’s added several more downtown buildings to his holdings.

Kern has become the downtown district’s moral conscience, challenging attempts to replace the distinctive with the homogenous. Not that he’s advocating the return of public intoxication and knife-wielding street fighters to Hamburger Square. He does, however, wish that the powers that be had more of a heart for the qualities that once made the area so special: a sense of time and place that tell a story about Greensboro and Greensboro alone. “There are only five blocks of Old Greensborough on South Elm Street left standing, and my belief is that these properties must be preserved,” Kern says. “They contain much of our history.”

Barnes has sought to blend Hamburger Square’s past with its present in a way that’s socially palatable. In 2019, as city leaders and civic groups planned a $370,000 renovation of the square’s park, he proposed handing out free wooden nickels good for a hamburger at Natty Greene’s, M’Coul’s, or Grey’s. In the meantime, Barnes, Schlosser, Kern, and others await the return of a bona fide hamburger joint to Hamburger Square, the kind of place that wears its steamed-up windows like a badge of honor.

In September 1959, the Golden Arches arrived in North Carolina. The 140th McDonald’s, on Summit Avenue in Greensboro, was the first in the state, and the first fast-food restaurant in the city. The revolutionary streamlined method of food preparation, modeled on Henry Ford’s automobile assembly-line process, allowed diners to get their meals faster and cheaper than anywhere else in town. The menu’s only combo meal included a hamburger, fries, and a shake — all for just 45 cents.

Nearly 63 years later, the restaurant is still open in its original location, albeit in a new building. James “Smitty” Smith, who has co-owned the restaurant with his wife, Debra, since 2000, is proud to own North Carolina’s first McDonald’s. He’s prouder still to be one of the first African Americans to own a McDonald’s restaurant in the Triad, an honor he achieved when he purchased two other Greensboro locations in 1993. “From 1959 to 1963, African Americans couldn’t even go in the front door to be served; they had to go to the back door,” Smitty says of the Summit Avenue location. “Some of my church members mentioned that to me when we purchased it — how proud they were of my family. We consider this a part of our legacy.” — Rebecca Woltz