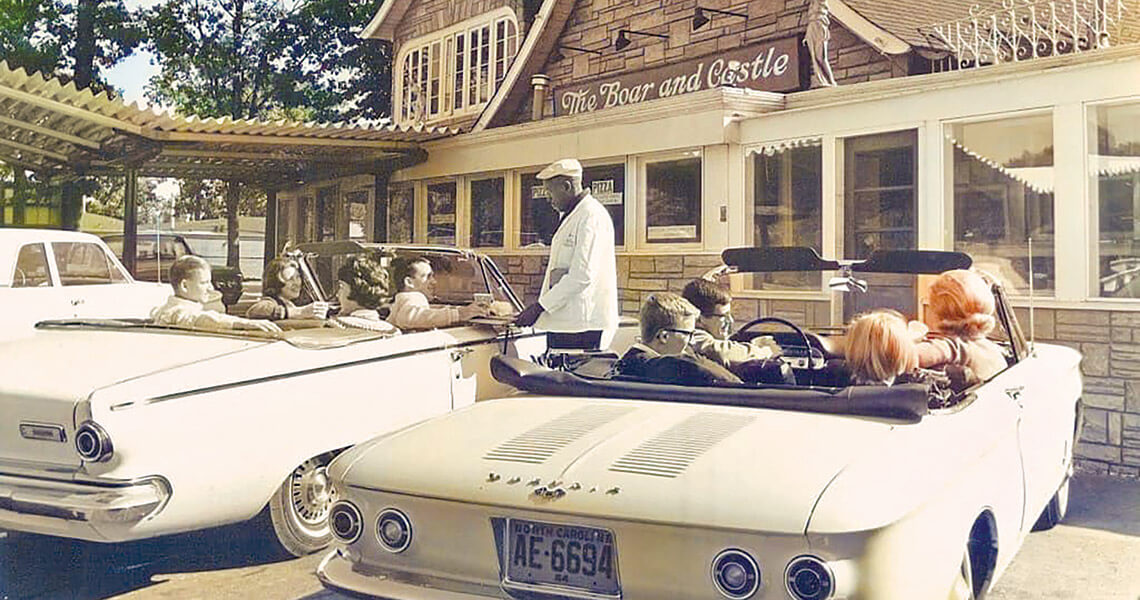 Related: Greensboro’s Hamburger Square: This tiny city block in downtown Greensboro once had a gigantic reputation. Not so much for its charbroiled beef patties — though they, too, were plentiful — but for its colorful characters and their wild shenanigans.

Menu from The Boar and Castle on Market Street, where customers knew they could always order a delicious Castleburger with its famous tomato-mustard-vinegar sauce that’s now popular statewide. Photography courtesy of Boar and Castle

Once upon a time, there was a castle on West Market Street in Greensboro — The Boar and Castle. From 1932 until 1980, customers would drive up and wait in their cars for a Castleburger or a butter steak sandwich topped with The Boar and Castle’s namesake sauce, which owner Leon Thomas’s mother created more than a century ago. In the 1960s, a Castleburger would run you about 40 cents, as would a bottle of the coveted sauce — which can still be found on local grocery store shelves. Teenagers with freshly minted driver’s licenses would haul their friends to The Boar and Castle for burgers and onion rings with extra sauce on the side, served warm in small cups. For those who grew up in Greensboro during this era, this was the spot for a great burger in the days when fast food was served in a tray attached to the side of your car door.

In 1961, a new kind of burger joint came to town. The popular Florida-based chain Biff-Burger, which advertised a patented “roto-broiled” burger, set up shop on what was then known as West Lee Street. The chain went under in the ’70s, but the Greensboro location kept on, changing its name to Beef Burger in 1981. Owner Ralph Havis — who ran Beef Burger until he fell ill and died in the summer of 2021 — was as much of a staple at the beloved restaurant as the burgers he served. The restaurant, which closed after Havis’s death, earned a loyal following that kept coming back for a simple reason: It served an affordable, honest burger that kept Greensboro fed for nearly 60 years.

Although The Boar and Castle and Beef Burger are now only fond memories for local hamburger fans, the legacy of these original burger joints lives on across the city that has earned the (very unofficial) moniker “Greensburger.” 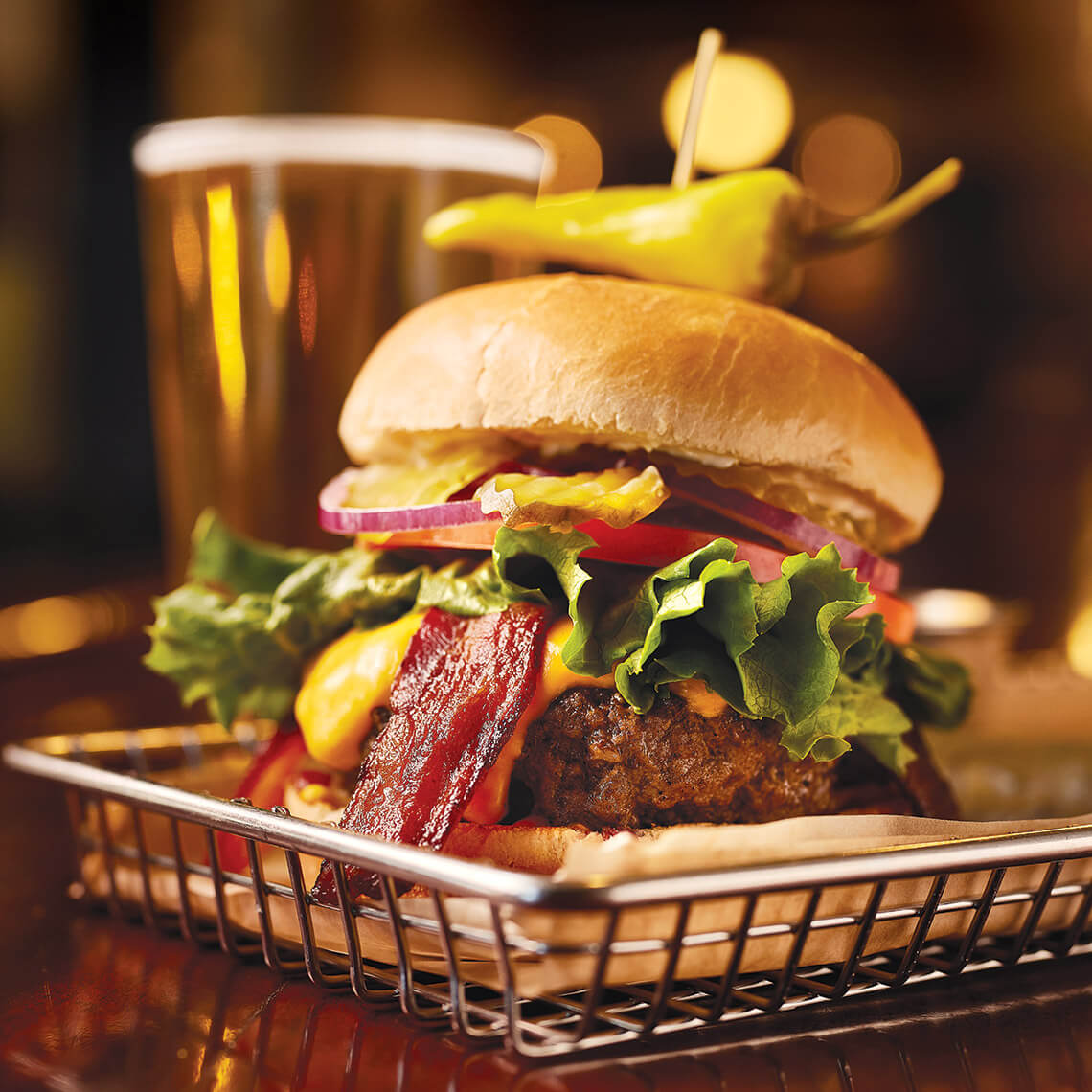 Sometimes, simple is best: The Hops Classic — a big beef burger topped with American cheese, applewood bacon, and the usual fixings — is No. 1 on Hops’ menu. Sorry, turkey burger. photograph by Alex Boerner

You’d be forgiven if you mistook the flavor-packed toppings at Hops Burger Bar for the menu at a fine-dining restaurant: farm-fresh fried eggs, bourbon-marinated pickles, jalapeño bacon, roasted garlic-thyme aioli, wasabi slaw. But it’s those fancy fixings that helped earn Hops the title of best burger in the country from TripAdvisor in 2015, just two years after the now-legendary burger spot opened on Spring Garden Street, right around the corner from UNC Greensboro and the bungalows of the Lindley Park neighborhood.

From the beginning, co-owners Chris Martin and David Essa paired experimental burgers with craft beers at a time when such a concept was relatively new for the area. Since then, the Hops family has grown to include two locations in Greensboro and one in Winston-Salem.

Crowd favorites on the menu include the North Carolinian, piled high with a fried egg, applewood bacon, pimento cheese, lettuce, and a perfectly fried green tomato. It’s tied in popularity with the Diablo, which has pepper jack cheese, guacamole, jalapeños, lettuce, sautéed onions, and jalapeño bacon, all piled onto a sriracha bun. Of course, the ultimate test of a burger spot is its classic version, and The Hops Classic — American cheese, bacon, and all the fixings — has been the most-ordered option since Day 1. So go ahead, indulge in a fancier burger with all the drippy yolks, house-made sauces, and grilled pineapple you want. But just know that a classic burger, like the one that kept Hops’ predecessors Beef Burger and The Boar and Castle in business for a combined 108 years, still wins Greensboro’s hearts and appetites.

The bar at Fishers Grille is packed this afternoon, like it is almost every afternoon. Around lunchtime, it becomes a sort of census report of Greensboro come to life: There are families from around the corner; there are coworkers, some in heels and some in dusty boots; and then there’s the table of guys sitting under the chalkboard menu. They’ve been there so long that it’s as if the bar was built around them.

For 33 years, Fishers Grille has stood at the edge of its historic namesake, the Fisher Park neighborhood. A few years after Doug Jones opened the bar in 1989, he hired Mike Stover as the kitchen manager. In the years since, Stover has served up countless burgers that are consistently delicious. “If you came in 15 years ago or you come in today, that burger is going to be the same,” Stover says. One of the most popular options is the Cajun burger, a spicy stack of red and green peppers, provolone cheese, onions, and a juicy burger on a buttered brioche bun. They’re easy to spot on the bar during the lunch rush and fit in well with the colorful decor — a mix of Detroit (Jones is a Motor City native) and North Carolina sports memorabilia and that chalkboard menu, which has itself become a Greensboro icon. 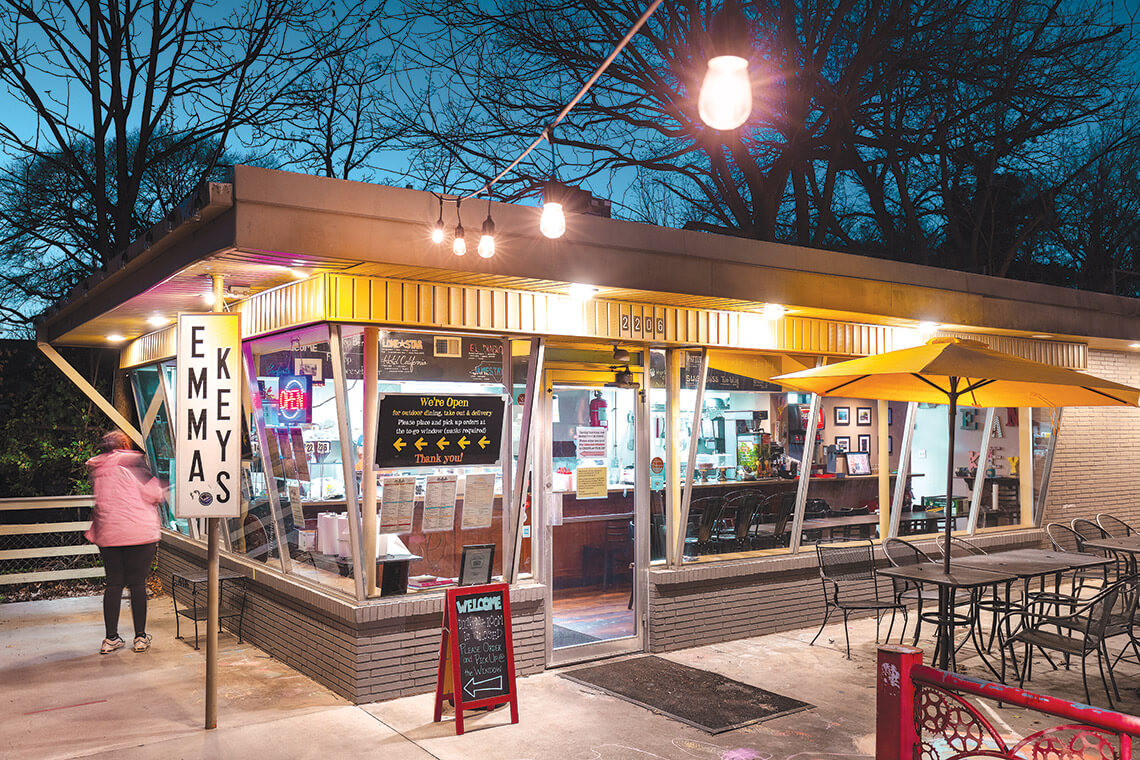 A customer takes his place in the line that snakes up to the walk-up window at Emma Key’s in the historic Lindley Park neighborhood. He never glances at the menu. There’s no need — he’s eaten here so often that there’s a dedicated button on the cash register just for his order: a burger as rare as they’ll make it, on sourdough bread with pickles. From certain spots in line, hungry customers can see just beyond the cashier to the restaurant’s legendary flat-top grill. Workers stand at the range, prepping epic burgers like the Lone Star: a six-ounce patty featuring Cheddar, bacon, mayo, lettuce, tomato, crispy onions, and barbecue sauce.

Before becoming a burger joint, the space had been a barbershop that opened in the ’50s — which, incidentally, was where current Emma Key’s owner Gene Bordinger used to get his hair cut. Now, it’s renowned for its fries — like the Carolina cheese fries smothered with pimento cheese, and topped with bacon and dill spears — and its burgers served in classic red plastic baskets, the only throne for a proper patty.

A Burger for Everyone

Eleven years ago, Guy Bradley opened his first Big Burger Spot on Battleground Avenue with a couple of stipulations: All of the food would be made from scratch, and every customer should be able to find something on the menu to enjoy. With 13 burger options, 15 different kinds of fries, and 32 toppings — from homemade chili to pimento cheese — Bradley has stuck to his word.

Bradley chose an unexpected location for his restaurant — a building that it shares with a gas station — and an unconventional method of cooking burgers: an infrared grill, whose extremely high temperatures give burgers a deep charred flavor without drying them out. Customers were hooked — so much so that Bradley opened two other Big Burger Spots in the Triad.

In return for their loyalty, many regulars have had their portraits sketched on the mural at the flagship location. Pointing to each face, Bradley rattles off names and go-to orders — including comedian Steve Harvey, who ate at Big Burger Spot in 2015 after featuring it on his show. Harvey’s order? A mountainous creation with a pair of patties, topped with cheese and steak fries. 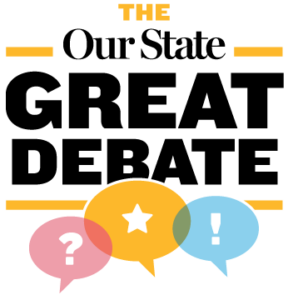 Battle of the Burgers: Our state has clearly perfected both styles, but which burger do you think is superior: a perfectly crispy, flat-top-style smashburger, or a juicy, grilled thick burger piled high with toppings? To vote for your favorite, visit ourstate.com/greatdebate.