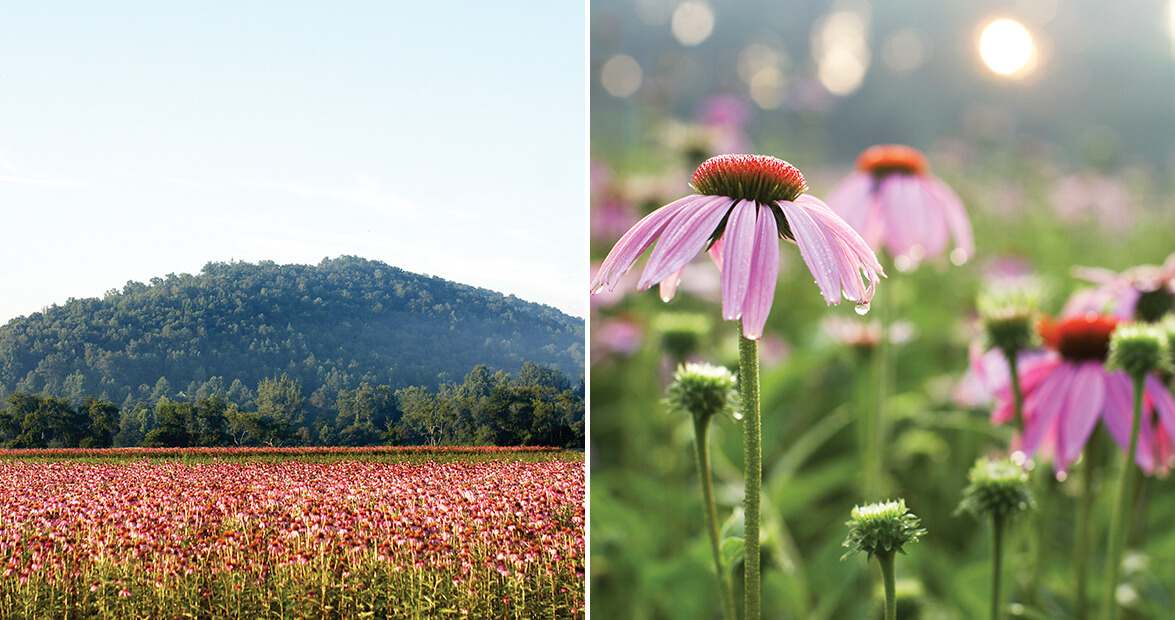 Alison Czeczuga’s sedan bounces along the rutted dirt road toward Gaia Farm. She apologizes for the mess, explaining that the dogs, goats, and chickens that share her home have, at various times, all hitched a ride in the compact car. The smelly seats are forgotten when she stops in front of a field of echinacea.

Rows of the fragrant herb stretch over the landscape. The foliage extends across the stick-straight furrows to touch adjacent plants, and each of the plump seed heads pokes up like the curled back of a hedgehog, with delicate purple petals bursting from the center.

More than 30 acres of echinacea are growing on Gaia Farm this season. The rest of the 350-acre organic farm is planted with more than 30 different varieties of medicinal herbs, including valerian, peppermint, passionflower, astragalus, and gingko.

During a farm tour, Czeczuga, the education manager for the Brevard-based medicinal herb grower and manufacturer, stops to appreciate each species. The field of oats, she observes, looks like an iridescent wave in the breeze, and the valerian will be beautiful in a few weeks when its blooms pop.

As she navigates the dirt road, Czeczuga points out a row of beehives and a field of organic vegetables that Gaia Farm grows for its staff.

“The farm uses the ancient wisdom of working the land to grow herbs that our ancestors used as medicines,” she explains. “We pair that ancient wisdom with modern science.”

Back in the building that serves as the headquarters for Gaia Herbs, Ric Scalzo pours green tea into a small cup and takes a sip before explaining how he came to start the company in 1987. 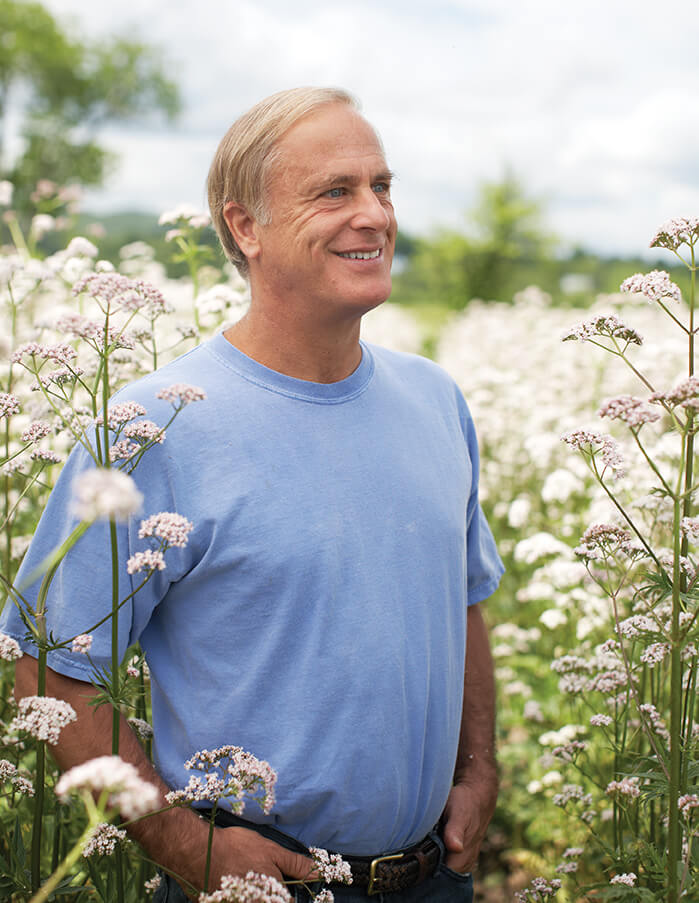 Gaia Farm owner Ric Scalzo, amid a field of valerian, is a master herbalist and naturopath. photograph by Stacey Van Berkel

At the time, Scalzo — who looks more like a surfer than a master herbalist and naturopath — was seeing patients in New England. Instead of simply dispensing mass-manufactured herbal medicines, he went into the woods to harvest wild herbs, turning them into homemade elixirs. Although he believed in the power of natural remedies, Scalzo also recognized that depending on nature to meet the demand for medicinal herbs wasn’t sustainable.

“Most of the herbs that are indigenous to our mountains are now, if not exploited, threatened, [because] there’s still a culture of people who are poaching them from the environment,” he explains. “We needed to protect wild populations and stop over-harvesting.”

As the demand for his nature-based remedies grew, Scalzo decided to stop seeing patients and focus on growing herbs and manufacturing herbal medicines. He purchased farmland in North Carolina because of the state’s biodiversity. Eighty percent of all plants that can grow in the United States, including ginseng and black cohosh, are native to the Tar Heel State.

“As high-tech as we get, it’s still a basic partnership with the plants.”

Gaia Herbs moved from Massachusetts to North Carolina in 1996. In the beginning, the herbal medicine maker grew a variety of herbs in the mountains and shipped them to New England for processing. Acknowledging that the process was time-consuming and expensive, Scalzo packed up and moved south, building manufacturing facilities adjacent to the farm. Over the past three decades, Gaia Herbs has grown from a fledgling startup to a thriving international company with wide distribution and more than $50 million in annual sales.

On the farm, a once-wild expanse of land tucked between the Pisgah National Forest, the French Broad River, and Catheys Creek watershed, Bill Chioffi, the vice president of global sourcing, grows several of the same medicinal herbs that have been growing wild in the mountains of North Carolina for centuries. The farming methods, he explains, haven’t changed much over time: Soil is tilled, seeds are sown, crops are irrigated, herbs are harvested. 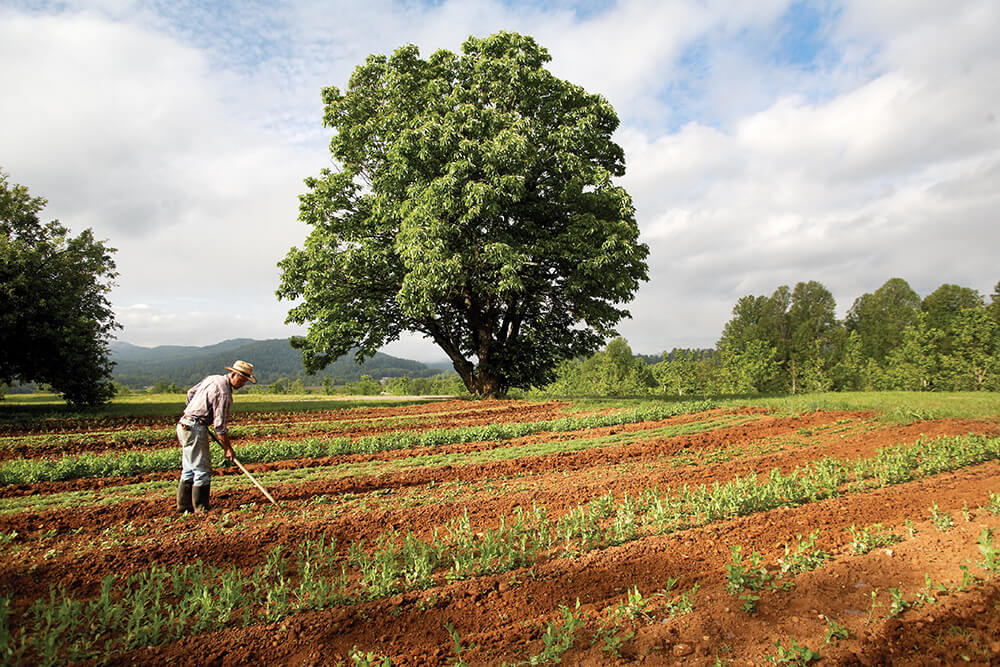 Gaia Herbs even honors ancient wisdom when it comes to turning raw materials into herbal medicines for the mass market.

“We always look back to see how people were using these plants in the past and use that information to guide us as to how we should use them today,” he says.

But the process of taking herbs from seed to shelf is more high-tech than old-school.

The manufacturing facilities, which are housed in a group of metal buildings painted the color of sand, produce more than 200 products that are sold in independent health food stores, natural food chains, and retail behemoths like Whole Foods.

Routine soil testing examines the health of the microorganisms in the soil and provides essential data about nutrient deficiencies that guide decisions about soil amendments. Herb samples are taken from each field and subjected to high-performance liquid chromatography to test the levels of active ingredients. The result, which Chioffi calls “the chemical fingerprint of the plant,” guides the harvest. The goal is to pick the herbs when they’re at their peak potency, rather than boosting their concentrations by mechanical means, like heat and toxic solvents, which are common practices in other herbal manufacturers.

“As high-tech as we get, it’s still a basic partnership with the plants,” Chioffi says.

As part of that partnership with nature, Gaia Herbs acknowledges that the farmland in the fertile valley doesn’t provide ideal growing conditions for all the herbs the company needs for its supplements, elixirs, and teas.

The certified-organic farm grows fewer than 50, focusing on indigenous herbs that thrive in the region; additional herbs are sourced from certified-organic growers around the world, including a 125-acre turmeric farm that the company purchased in Costa Rica.

Relationships with sourcing partners are essential, but Gaia Herbs also has worked hard to build trust with consumers. In response to the changing market, the business has pivoted several times, moving from liquids to patented phyto-capsules, adding new products, and introducing powdered herbal blends.

In the spring, the company introduced a traceability platform on gaiaherbs.com called Meet Your Herbs, which allows customers to enter an ID number from any Gaia Herbs bottle to access information about where and how the herbs were grown, certificates of compliance, and test results for their therapeutic properties. The goal, according to Scalzo, is to “reach a new generation of consumers who are interested in herbal medicines but want to know the products are safe and efficacious.”

Czeczuga doesn’t need convincing. She carries a backpack filled with elixirs; wears a T-shirt that reads, “Stress Happens — Adapt to It,” a promotion for a line of products supporting adrenal health; and talks about the mission of Gaia Herbs as if it were a religion.

“Gaia’s role is to prove something we’ve known to be true for centuries,” she says. “Herbs restore us.”