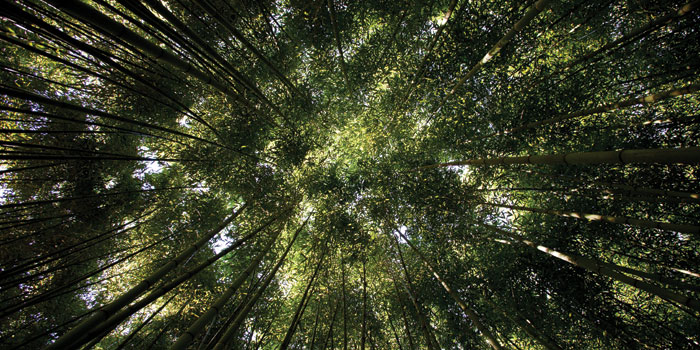 Keiji Oshima’s speech calls to mind Japanese poetry. He prunes his sentences with the same care he gives a bonsai tree that’s just begun to take form. As the bamboo farmer drives through the winding roads of Henderson County, he looks out over sprawling apple orchards and says, “So many apples. Apples and bamboo. The bamboo is my place.” Occasionally, groves of unkempt bamboo appear alongside the blacktop. “Old. So very old. Planted 100 years ago,” Keiji says, glancing at a wild-looking patch.

When Keiji first moved to North Carolina from rural Japan in the 1970s, he drove up to people’s houses to ask permission to look at the feral bamboo growing on their property. Many of the groves Keiji found hadn’t been touched by human hands for nearly a century. He suspects that most are remnants of a short-lived bamboo dissemination program founded in the early 1900s. The majority of the patches he found consisted of ‘yellow groove bamboo,’ an introduced species that is particularly suited to the elements of altitude.

Keiji, a slight man with a silvering ponytail, is similarly sensitive to place. He and his wife, Stefani, a fellow bamboo enthusiast, first met in an African hostel. Together, they crossed oceans and continents with abandon. When they finally agreed that it was time to settle down, their options seemed limitless. But after some discussion, their search narrowed. They needed to find a place that would provide the right environment for starting a family and raising bamboo. Stefani, a native of South Miami, Florida, who spent summers camping in western North Carolina as a child, mentioned the southern Appalachians to Keiji, who agreed that the climate resembled that of his native Japan.

In 2007, Henderson County and its adjacent municipalities were discovered to be the specific home of a previously unknown species of native bamboo, the first species identified in more than 200 years. Arundinaria appalachiana, or hill cane, was a familiar sight to some who lived in the area, but they hadn’t realized its uniqueness and global worth. The same might be said of Keiji and Stefani’s nursery, Haiku Bamboo.

The fact that hill cane, one of only three native bamboo species in North America, was found almost in the Oshimas’ backyard is a testament to the couple’s foresight and intuition. They deemed the locale a prime bamboo habitat 25 years ago when they founded their nursery and — after spending most of their adult lives advocating for the plant — their beloved Henderson County is now known as bamboo country. Haiku Bamboo, buoyed by surging interest from the sustainable and green-building movements, now receives expertise inquiries from as far away as Laos.

When asked why he and his wife chose to include “haiku” in the name of their nursery, Keiji pauses for a moment. He explains that his youthful involvement with a literary circle in Japan affected the decision. Then, he says that sitting in a bamboo forest has always been his favorite place to write succinct, nature-inspired poetry, which he calls freedom haiku because his works don’t follow haiku’s traditional syllable structure. Finally, he settles on a definitive answer, and he nods his head to indicate that this is, indeed, the real story: “Haiku is simple, but very difficult. Very difficult. Bamboo is the same. Simple, but very difficult to maintain.”

Reverence in the groves

When Keiji reaches a small clapboard church marked by a handpainted sign, he takes a sharp left. Rhododendron forests flank both sides of the gravel drive leading to his house. Where the rhododendron ends, the bamboo begins. A copper-colored dog greets Keiji and hops around his master as he makes his rounds. The cozy, wood-sided house that Keiji shares with Stefani overlooks six acres of bamboo made up of 24 species. Numbers scrawled in black marker label the plants’ stalks. Keiji points to an eight, representing 2008. “It’s very important to know when they were born,” he says. In just 60 days, most species grow taller than Keiji, who guides their girth through a careful maintenance plan.

The Madake Grove, meaning giant timbers in Japanese, is Keiji’s favorite. The stalks stand a few feet apart, a far cry from the mangled mass of bamboo spotted along the roads leading to his land. It is an inviting haven of clean lines shooting toward the sky. Bamboo, which has a recorded growth rate of up to 42 inches in a 24-hour period, is the fastest-growing woody plant on the planet, and it produces 30 percent more oxygen than hardwood trees. Keiji sometimes falls asleep when he sits down in his green, breathing groves. Birds often come right up to him when he’s amidst the stalks. Keiji believes that the animals respond to the peace of the place. “People always have many questions for me on tours, but when they get into the forest — silence,” he says, smiling.

Keiji stands in the forest for a moment, listening to the evergreen leaves above rub against each other — mimicking the sound of a stream running over smooth stones — before moving on to survey groves of varying species. The plants have varied purposes, and Keiji knows many of them. “Long time ago, they were used for arrows,” he says of a pencil-size species. He then turns to another grouping a few feet away. “Big leaf,” he says, taking one of the stumpy plant’s broad, low-lying leaves into his hand and wrapping it around his slender wrist. “Long time ago, they would wrap this around a bite. It could draw out poison.”

Earlier in the day, Keiji visited Stefani in the Haiku Bamboo warehouse, an unassuming, metal building full of poles and the handicrafts Keiji makes from their crops. He came by to fit the mouthpiece of a Shakuhachi flute, an instrument prized for its soft, melodic tone. When he gave a demonstration of the new instrument — made from a piece of bamboo that cured for more than three years — his wife beamed. “There’s no other instrument in the world that can make a sound like that,” she said.

After several years of business, the Oshimas realized the lack of educational opportunities for people interested in growing or working with bamboo. So, they began a series of workshops. Bamboo is, arguably, the most practical plant in the world. And if someone wants to argue against its utilitarian status, he better come prepared. The Oshimas have a showroom full of hard evidence — and they don’t even touch on the fact that bamboo is edible. The warehouse is stocked with socks spun from bamboo, teapots, purses, train whistles, baskets, mirror frames, and poles, as well as photos of what becomes of them. One customer project the Oshimas are particularly proud of is a handsome bicycle built of bamboo. Stefani shows off what appears to be a typical bike aside from its earth-tone frame. “The guy who built this bicycle used it in a race and won,” she says.

With the plant’s various attributes and uses, it’s hard to believe that it has a bad reputation, but many of the Oshimas’ neighbors are wary of its presence. “Bamboo is invasive, so people talk about it negatively, but it’s invasive because it’s not maintained,” Stefani says. “If grass isn’t cut, it becomes a jungle, same with a garden. … I’ve been watching my neighbors maintain their apple trees, pruning them. That’s what has to be done to bamboo to make it useful. I’m thinking about approaching some of the apple farmers around here to see if they’d be interested in growing bamboo.”

The Oshimas seem to care as much about the health of their agricultural community as they do about cornering a market share. Bamboo, which is naturally pest and fungus resistant, can be harvested within five years, whereas lumber takes 20 or so years to grow to a usable size. “People in this area know the land,” Stefani says. “If we teach them how to maintain bamboo, it could really be a great thing.”

It’s now past noon. Keiji walks through a kingdom of bamboo; some stalks tower above his head, and others crouch at his feet. He passes small, hollow stumps, the memory of poles that found other lives, inventive uses. Keiji gained most of his scientific knowledge as an assistant to the renowned researcher Koichiro Ueda, whom Keiji assisted prior to the sojourn that led him to Stefani, but he also learned a great deal from family members. His grandparents — like many of their generation in Japan — grew bamboo as a side business. “My grandparents always told me that … the bamboo forest was a safe place,” Keiji says. He opens his hands and interlaces his fingers. “Under the ground, bamboo is like a big net holding the earth together. It never shakes.”

Impressive root structures called rhizomes stabilize the bamboo. Keiji scans the ground to find a rhizome that’s risen above the dark brown soil. When he stoops down to set a rain gauge upright, he stumbles upon what he’s looking for. The rhizome appears as a green serpent swimming through an earthen sea, its curves appearing and disappearing in five-inch increments, a hint of the safety net beneath Keiji’s feet.

Keiji runs his finger along the rhizome’s smooth, waxen surface until it catches on a small shoot that’s just begun to form. “There is a baby,” he announces, happily. “They teach me a lot about living,” he says of his plants. “They have to help each other. It’s just like with humans. A tree is alone, but bamboo is a living family. That’s why bamboo is so strong. So very strong.”

Leigh Ann Henion is a freelance writer who lives in Boone. Her work has appeared in Smithsonian, The Washington Post, and Oxford American.