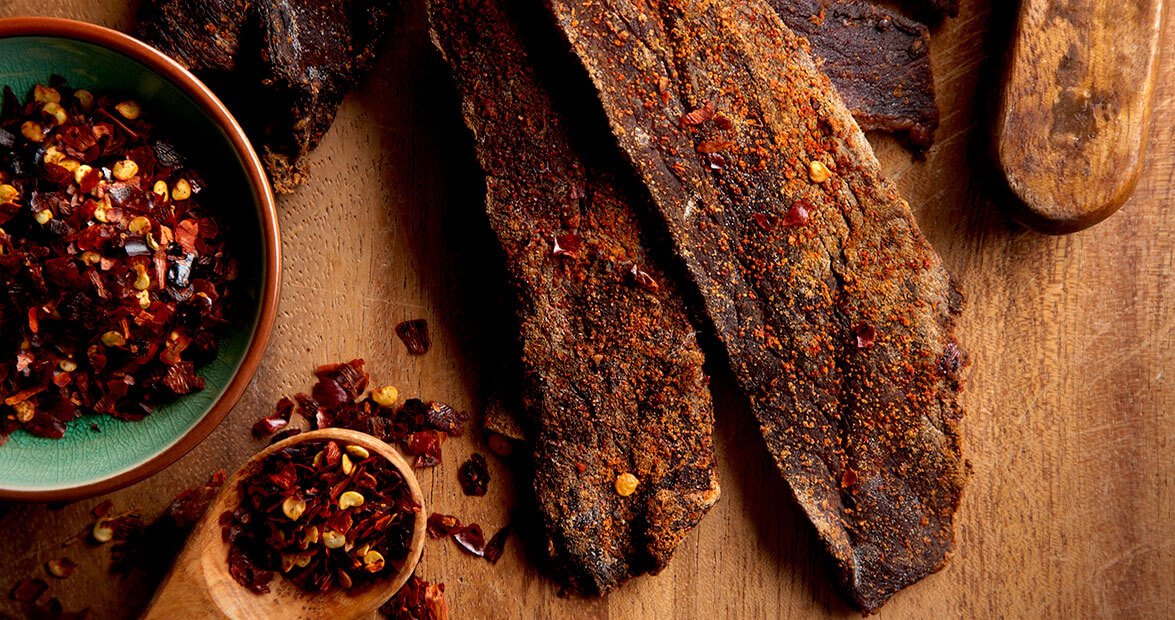 Despite a childhood love of Slim Jims, Paul Brock found that his convenience store go-to just didn’t satisfy his jerky cravings as an adult. His taste buds had grown up, and they wanted beefy flavor spiked with pepper or heat, maybe a twang of ginger. A friend suggested that Brock make his own. So he took to the kitchen, tweaking marinades and futzing over a countertop dehydrator until he finally had a batch that he could proudly give to friends and family. “I did some really crispy jerky a few times,” admits Brock, a family law mediator who lives in Bat Cave. Compliments and polite hints for more poured in, and in 2012, he and his brother turned the personal quest into a business, Two Brothers Jerky.

This is how it is with jerky: People can’t help themselves. No snack is quite like it — the satisfying texture, the addictive, savory flavor. But those who crave meat in its most portable and least perishable form — including, but not limited to, hungry teenagers, hikers, and hunters in duck blinds — have mostly had only mass-produced, big-company products to choose from. Until now. Jerky is having a moment in North Carolina, as a dozen or so artisan jerky-makers have launched their own brands here in recent years. And with better-quality jerky available, the jerky-loving population has grown.

“The whole Paleo Diet craze is helping the business,” says Brock’s brother Eddie Wales, a Columbia, South Carolina, restaurateur and co-owner of Two Brothers Jerky. “Everyone wants protein, protein, protein.” That was also a key selling point for the country’s original jerky-makers, Native Americans. Cherokees would dry meat or pound it with berries, nuts, and fat to make pemmican, which helped them survive lean winters.

Protein powers muscle, of course, so it didn’t surprise Damon and Suzanne Stevens, owners of the Jerky Outpost in Valle Crucis, when a nutritionist from Appalachian State’s athletic department called. The nutritionist wanted to add a healthy protein snack to the athletes’ “refueling stations.” Now the Stevenses make an Appalachian State jerky for the athletic department, which they sell with some 360 other varieties at their shop. 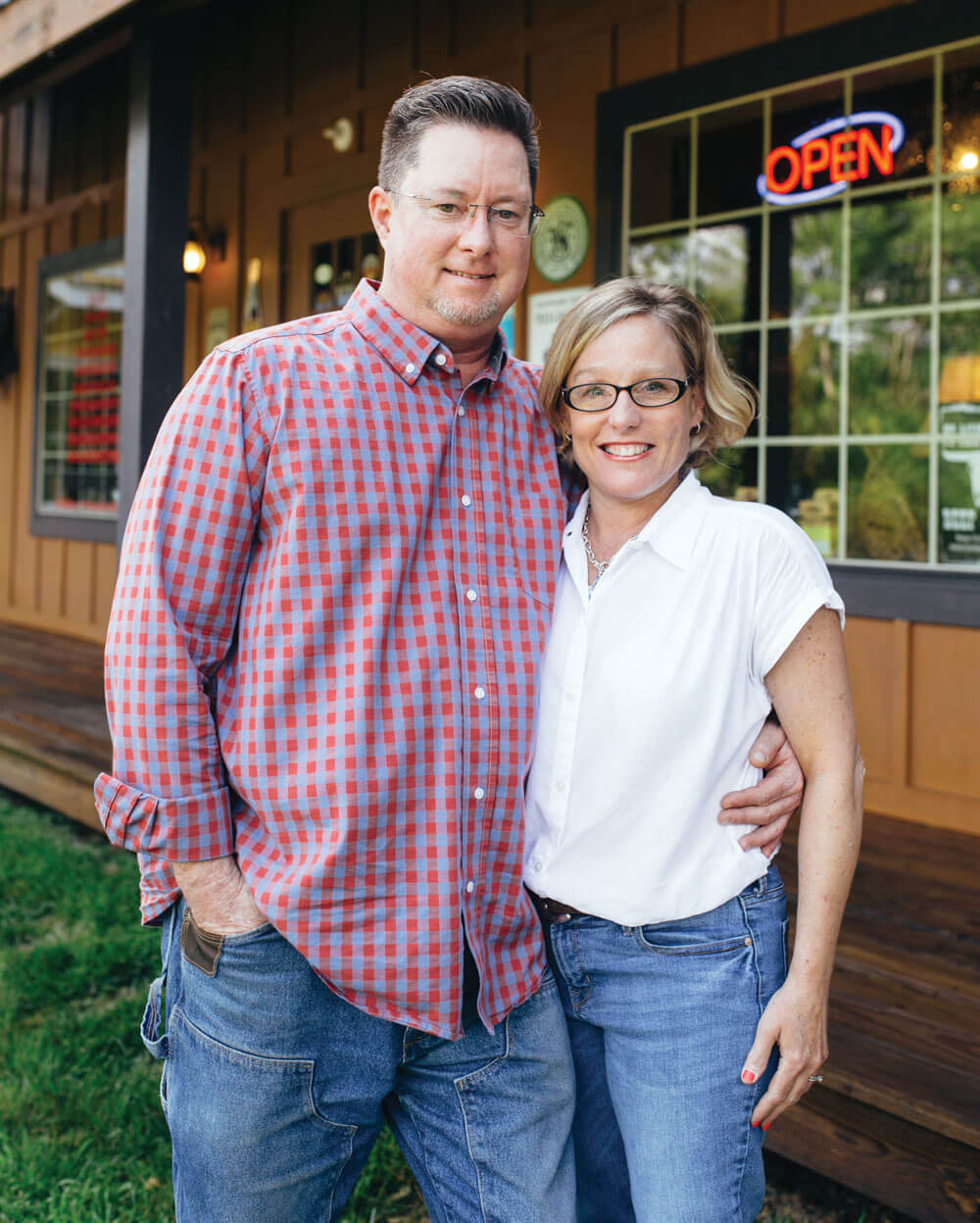 Damon and Suzanne Stevens turned the Valle Crucis inn they ran for many years into a destination for jerky lovers. photograph by Revival Creatives

Many of those brands are made in small batches, using locally or regionally sourced ingredients. Those who sell pasture-raised meat at a premium are often looking for new products that minimize waste. “For us, it’s part of a whole-animal strategy,” says Casey McKissick, founder of Foothills Meats, which sells its jerky at a combination butcher shop, bar, and restaurant in West Asheville and Black Mountain.

Because it’s a win-win for farmers and health-conscious consumers, craft jerky is the new kid in the eat-local movement. As a result, new words are appearing on jerky labels: no preservatives, gluten-free, grass-fed, and farm-raised. Patrick Robinette, a cattle farmer in Pinetops, says that the buyers of his Kiss My Grass jerky “are very savvy about gluten and nitrites.” His products have neither. Plus, he slaughters his cows at his processing facility, so he can tell those customers, “We’re controlling the product from farm to pouch.”

When Robinette and his son started hiking sections of the Appalachian Trail this year, they handed out samples. “We picked up customers,” he says. “We’re now shipping to resupply areas” — the designated locations where thru-hikers have supplies shipped to them.

Like the wave of home brewers who started making IPAs in their garages and now run breweries across the state, jerky aficionados have turned their kitchen hobbies into businesses. For years, Alvin Cape, a gas tanker driver in Statesville, impressed his friends with his homemade, cowboy-style beef jerky — thin and crispy, like a potato chip. Around 2014, Cape decided to use his in-laws’ meat processing facility to start producing AC’s Yummy Jerky. It was a hard road at first. Cape drove his gas truck at night, delivered jerky in the morning, then made more jerky in the afternoon. He’d sleep until 10:30 p.m. and get up to drive again. His wife, Judy, and his 84-year-old mother-in-law both helped out, and his 85-year-old father-in-law worked with Cape until a few days before he died in 2017.

After a year of toil, Cape’s jerky was selling well enough that he could quit truck driving. “It was liberating,” he says, adding, “I still have to work very hard.” His jerky is now sold throughout the state.

Chef Swen Altis took a similar leap after working for years as an executive chef at sports arenas and universities. Altis’s hunting buddies urged him to turn his homemade jerky into a business. So in 2016, he launched Shiners Stash Jerky and created 45 different flavors of beef, pork, and bacon jerky, including spicy Creole and dill pickle. As a hunter, he liked the idea of using game meat, too, so he offered to make specialty jerky — deer, elk, antelope, even bear — from what hunters brought him. “From November to January, people come in with 20 to 30 deer a week,” he says. 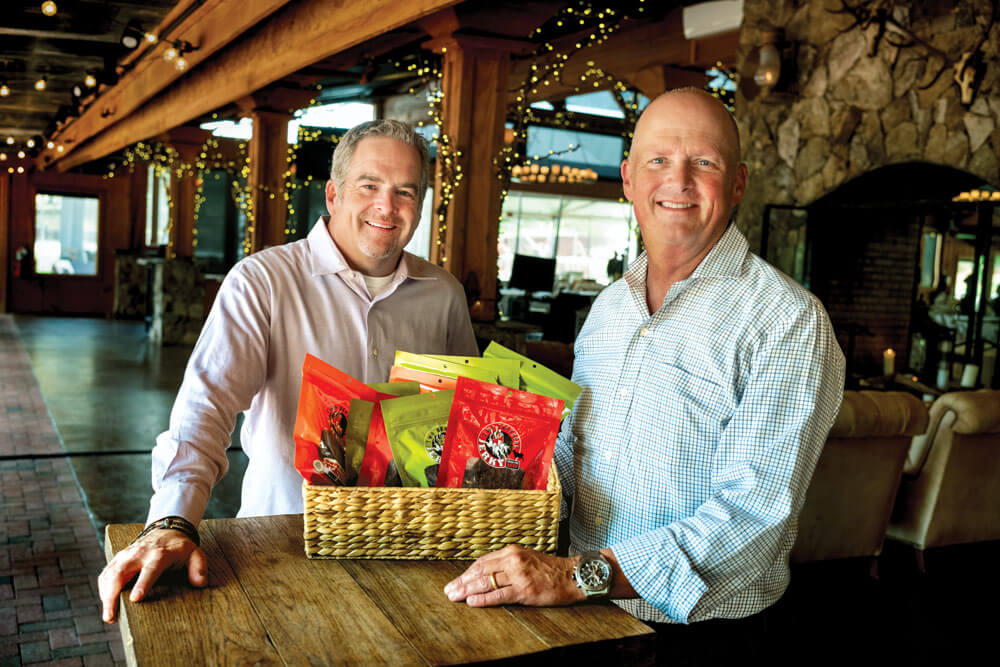 Paul Brock (left) and his brother Eddie Wales of Two Brothers Jerky use their business to help support the North Carolina Children’s Home Society, which helped place them with their own adoptive families. photograph by Charles Harris

Deer jerky inspired a line of products from Queen B Farms in Mebane. The idea came to 16-year-old Charles Bunker, who noticed that all of his friends were eating deer jerky. He asked his parents if they could make jerky out of their cattle, and then he and his mother, Nita, started experimenting with recipes and a countertop dehydrator. Because the Bunkers’ cows are processed at a slaughterhouse that adheres to Islamic rules for preparing meat, and the jerky is made in a facility that respects those rules, their jerky is designated halal. Several Middle Eastern grocery stores that cater to the Muslim community in Raleigh now carry the brand. Charles’s father, Eric, is most proud of his son’s contribution to the family farm: “He’s already working for his future.”

Of all of the state’s jerky stories — and, clearly, there are many — none is richer and more complex than the origin of Two Brothers Jerky. Brock grew up in Haywood County knowing that he had been adopted. After he had children of his own, and encouraged by his late wife, Karen, Brock tracked down his birth mother, a former nurse living in Atlanta with three grown children. She told him that she had given up another son by the same father 14 months before Brock was born. Three years later, Brock, who was now close to his birth mother and half-siblings, decided to track down his brother. One night in 2010, he called Eddie Wales, the owner of Motor Supply Co. Bistro in Columbia, South Carolina. Wales had grown up in Salisbury and always knew he was adopted.

Soon after, the brothers met and began spending holidays and family vacations together, along with their birth mother, half-siblings, and their families. It was during one of those gatherings at Brock’s mountain house that Wales tasted his brother’s jerky, and the two hatched a business plan.

“We wanted to do something together,” Brock says. As the business has grown, they’ve relied on each other’s strengths: Wales as the detail-oriented business owner. Brock as the chatty marketer and salesperson. “If we didn’t do this, we’d talk to each other and see each other, but not to the degree that we do now,” Wales says. Brock adds: “That’s what this business is about — doing what you love with people you love.”

AC’s Yummy Beef Jerky, made by a former truck driver turned entrepreneur in Statesville, is distinctive for its thin, crispy jerky, which comes in seven flavors. Available at more than 400 convenience stores and 250 Food Lion grocery stores.

Foothills Meats, a pasture-raised meat company that owns a food truck and two restaurants with butcher shops in West Asheville and Black Mountain, sells its beef jerky on the premises.

Jerky Outpost has two locations — in Valle Crucis and Blowing Rock — and offers more than 360 varieties of jerky from around the country, as well as their own brand.

Kiss My Grass Jerky, made by the Harris-Robinette farm in Pinetops, comes in four flavors. These family farmers make jerky from their own grass-fed cattle.

Queen B Farms in Mebane is a family-owned cattle farm that sells jerky and meat sticks in original, hot, and sweet flavors. Available Saturday mornings at the Cary Downtown Farmers Market and the Piedmont Triad Farmers Market near Greensboro.

Sunset Ridge Buffalo Farm in Roxboro makes bison jerky for sale at the Durham and Carrboro farmers markets and at local stores: snack sticks in hot, mild, and sweet, and bags of sweet and hot jerky.