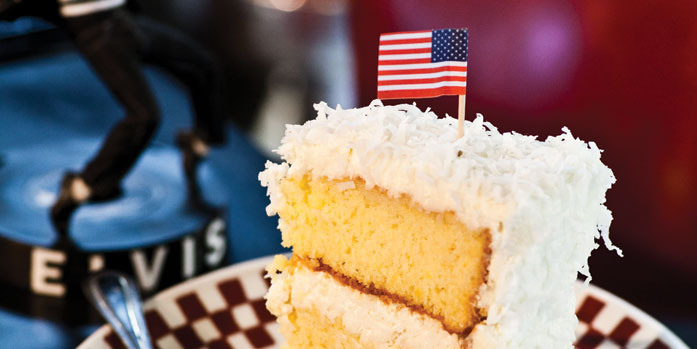 Two schoolboys duck in out of the rain and can’t believe their luck. It’s the Five Points neighborhood in Raleigh — home to boutiques, antiques stores and a pharmacy open since the 1930s. The kids didn’t expect to see such huge slices of cake — coconut, Boston cream, a “patty cake” of white chocolate cake layers and chocolate mousse icing. (The boys end up sharing a slice.) Cakes are just part of the 1940s-immersed scenery in the Hayes Barton Café decked out in chrome, checkerboard tile, and memorabilia from film, music, and World War II. Frank and Marget Ballard created the lunch, dinner, and dessert cafe 14 years ago in the former “greasy spoon” diner space that shares a doorway with the old Hayes-Barton Pharmacy. Ever since, customers have brought in war-veteran photographs to add to the decor, which includes a 1940s photo of Frank’s parents, Bill and Eula May Ballard, as sweethearts, as well as images drawn by Bill when he was a cartoonist for The News & Observer from 1951 to 1964.