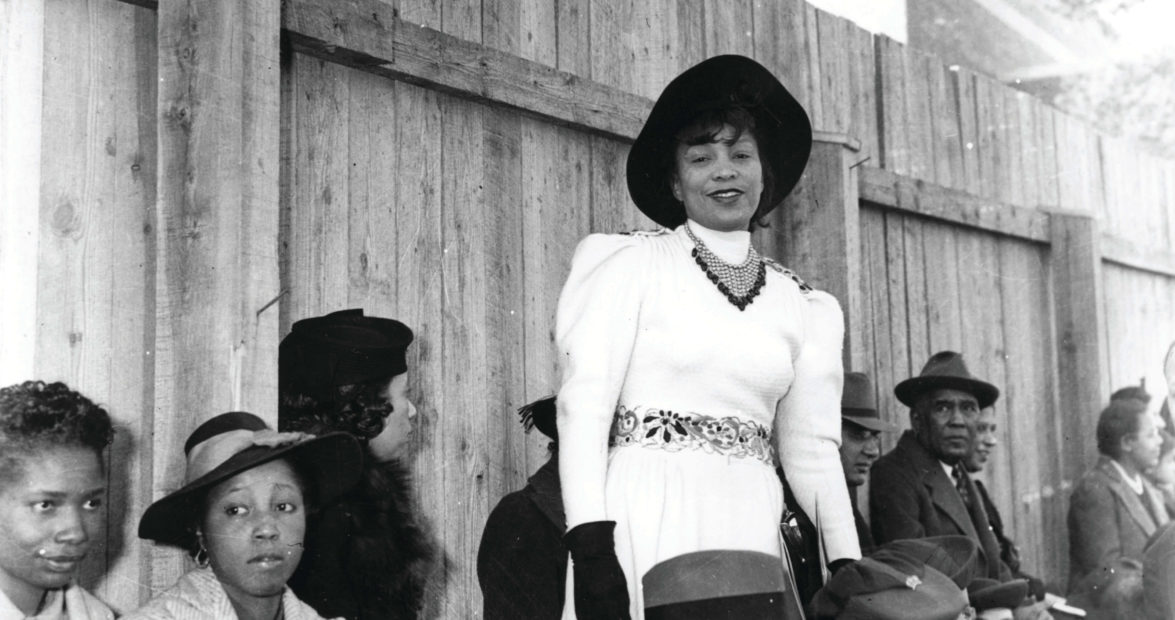 On a warm September afternoon in 1939, a striking woman in a jaunty beret turned heads as she drove her red convertible down Fayetteville Street and into the Hayti community on the southwest side of Durham.

She wheeled onto the campus of the North Carolina College for Negroes, set the brake, and stepped out to reveal her full outfit, which included pedal pushers — not exactly the conservative faculty attire preferred by Dr. James E. Shepard, the straight-laced founding president of the school that would later become North Carolina Central University.

Zora Neale Hurston, however, was hardly interested in conformity. Her 1937 masterwork, Their Eyes Were Watching God, had just been issued in Italy and England following its bright debut in the United States. The acclaimed writer and folklorist had been hired by Dr. Shepard to create a drama department at the college, and drama she delivered, although not so much in the classroom.

Hurston’s tenure in Durham was so short that many contemporary fans of her writing may not have known she ever set foot in the Bull City. Her story, however, is only one of many from a raft of female scribes who have lived, worked, and taken inspiration from this neighborhood that has long been a center of black education, artistic expression, and entrepreneurship.

By the time of Hurston’s arrival, Durham’s Hayti (pronounced Hay-Tie) was a flourishing world unto itself, where churches, factories, banks, real estate companies, and the nation’s largest black-owned insurance company, North Carolina Mutual, had been launched and sustained for decades. It was a place that inspired big dreams among its residents, despite the lingering barriers of Jim Crow beyond its boundaries.

As early as 1911, Booker T. Washington had declared Hayti a shining example of black enterprise. A year later, W.E.B. DuBois called it a black community “whose social and economic development is perhaps more striking than that of any similar group in the nation.”

“Hayti is one of those places where there is a comfort level among African Americans,” says L. Teresa Church, a Durham poet, playwright, and library archivist. “It’s a place I can find whatever I need, a place where we can be ourselves, take our shoes and hats off and feel at home. You see children playing ball, smoke rising from outdoor grills, people talking across fences and flower beds. I know I could go to any door, and people would say, ‘C’mon in here, girl.’”

In her role as an archivist, Church has done extensive study of Hayti’s history, processing the papers of the area’s most prominent families for a project documenting the American South at the University of North Carolina at Chapel Hill. She is also an officer in the Carolina African American Writers Collective, an organization that has some 50 members.

Where to begin: 804 Old Fayetteville Street

The Hayti Heritage Center at 804 Old Fayetteville Street is a good place to begin an exploration of this historic community. Formerly the home of St. Joseph’s African Methodist Episcopal Church, the facility plays host to authors, exhibits, concerts, lectures, and films that celebrate the cultural vitality of this Durham neighborhood that even survived the crushing loss of its main business corridor to construction of the Durham Freeway in the 1970s.

Farther down Fayetteville Street is another literary landmark. The Stanford L. Warren Library was the second black library organized in North Carolina and has been an important source of literary programming in the area since 1913 when it began in the basement of White Rock Baptist Church.

Just beyond the Warren Library are the larger homes that Durham’s elite African-American families built in the first half of the 20th century. Here, novelist Gwendolyn Parker was born in 1950. Parker’s great-grandfather, Aaron McDuffie Moore, was co-founder of North Carolina Mutual Life Insurance Company and the Mechanics and Farmers Bank — two of the primary institutions that led to Durham’s historic designation as home of the Black Wall Street.

Although Parker left Durham when she was nine, she never forgot her roots. She attended Radcliffe College and New York University Law School and worked as a Wall Street attorney before beginning her writing career. Her lyrical 1995 novel, These Same Long Bones, is based in Hayti, where she ran freely as a child among her relatives’ houses and listened for hours to the stories her elders told. Few novels depict so vividly a middle-class black family in the context of a patchwork community of poverty and prosperity in the mid-20th-century South.

Parker’s second book, a memoir, Trespassing: My Sojourn in the Halls of Privilege (1997), also details the comforts of her Durham childhood in a community that valued writing and reading. Parker contrasts these years in Hayti to the discrimination she later experienced in the boardrooms of corporate America. Today, Parker writes for television, most recently as a supervising producer, writer, and editor for various series, including “Without A Trace” and “CSI: Miami.”

A turn toward history

Another couple of blocks down Fayetteville Street, the main entrance to NCCU is usually festooned with flowers. This revered university dates back to 1910 and became the first state-supported liberal arts college for blacks in the country. Dr. Shepard, whose towering statue still oversees all who enter the gates, was president until 1947.

As a fiercely traditional man, Shepard was not prepared for the charming but feisty independence of Hurston. According to Hurston biographer Valerie Boyd, on her first day the author filled out her faculty information card in red ink, describing her marital status as “Married (getting divorced).” Given this, Dr. Shepard expected Hurston to live in unmarried female faculty housing on campus. Hurston insisted that she needed solitude to write and rented a cabin several miles away.

Shortly after settling in, Hurston was introduced to the legendary UNC drama professor Paul Green, whose 1927 Pulitzer-Prize-winning play, In Abraham’s Bosom, had been produced on Broadway. Green invited Hurston to join his playwriting seminar on Chapel Hill’s segregated campus. When one member of his all-white group objected to Hurston’s joining, Green promptly told the disgruntled student that she’d be missed in class.

Hurston enthralled her students at UNC with segments from a folk opera she was writing about backwoods Florida. She also pitched Green on the idea of developing a writing partnership for the theater, and she stayed in touch with him even after she left North Carolina to study the Gullah culture in South Carolina in March of 1940 — the severance being the only thing that she and Dr. Shepard could apparently agree upon.

Other prominent writers have served on the NCCU faculty over the years. Children’s author and folklorist Eleanora Tate served on the faculty in the School of Library and Information Sciences for several years and found the atmosphere particularly accommodating to her strong beliefs about providing children life lessons through stories. Among her honors, Tate received the 1999 Zora Neale Hurston Award from the National Association of Black Storytellers. She has written a number of books for children in which North Carolina folklore and black traditions are celebrated.

Another author, Wendy Rountree, whose specialty is black literature, teaches in the English department and is the author of Lost Soul for young adults.

Beyond NCCU, another half-mile down Fayetteville Street, is a bustling area of commerce. This section might well be the location for local writer Michele Andrea Bowen’s fictional shop, Miss Thang’s Holy Ghost Corner and Church Women’s Boutique — “the most perfect today’s-black-woman-friendly store in the Triangle cities of Raleigh, Durham, and Chapel Hill.” Holy Ghost Corner is Bowen’s first novel set in Durham. Her second, Up at the College, takes place largely on the campus of a historically black university in the city.

Continue south on Fayetteville Street to reach White Rock Baptist Church at the top of the hill. L. Teresa Church wrote a poem that speaks to celebrations that take place here, one of the neighborhood’s oldest places of worship.

Another half-mile beyond White Rock is Hillside High School, relocated to this site in 1995. Dating to the 1880s, this institution is now the oldest historically black high school still operating in North Carolina. Although poet and memoirist Pauli Murray was raised in a different Durham neighborhood, she attended Hillside, graduated at the top of her class, and went on to finish a degree with honors at Hunter College in New York City.

In 1938, Murray sought graduate study at UNC but was turned away because of her skin color. She went instead to law school at Howard University, all the while writing poetry and journaling. She graduated at the top of her class, a distinction that resulted in a fellowship to Harvard University. But Murray was denied admission to the law school, this time because she was female.

She took a fellowship instead at Boalt Hall Law School at the University of California and then began a long career as an activist — first in the field of civil rights and later as one of the founders of the National Organization for Women. In her 60s, she became the first black female ordained as an Episcopal priest. In 1956, Murray published a vivid memoir, Proud Shoes: The Story of an American Family, a book documenting her heritage in North Carolina and the pains of rejection in Durham.

Hayti today would quietly hold its secrets were it not for the fine prose and poems of these and other writers who found comfort in story and were driven to tell about the insular world that prodded them to write.