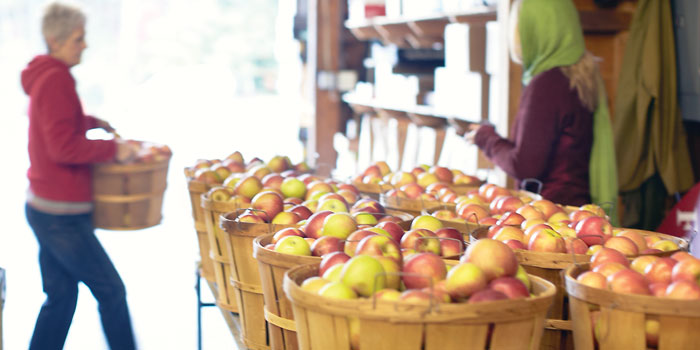 The 12-mile stretch between Hendersonville and Bat Cave has about 17 produce stands, some on curvy backroads, some on open interstates. Mountain Fresh Orchards sits just a couple of miles off Interstate 26.

Owner Donald “Red” Price likes the location, but people don’t come to his stand out of convenience. Customers often tell Red, 72, that they passed his business the first go-round, rode all the way to Bat Cave, and then headed back to his stand. After spending a few minutes here, you realize why customers would seek out Red’s place no matter its location.

Daphne Carland, Red’s daughter and second in command at Mountain Fresh, encourages customers to sign a guest book telling her how far they traveled to get here. It’s a passport book of sorts, and she’s proud of it. She has a stamp from almost every state in the Southeast and beyond.

“When I see they’ve come from out of the country even, like Russia, I wonder, ‘How in the world did they find us here?’ ” Daphne says.

Personality of the place

The apples at Mountain Fresh bring repeat travelers back in long caravans of cars, vans, and chartered buses. But with all of the choices available in the region, with the hills of eastern Henderson County providing just the right climate for growing apples, it takes more than quality produce for one stand to separate itself from the rest. The people inside the stand — the ones who carry your box of fruit to the car and offer you a sample of apple cider — keep the customers satisfied.

People across the state grow up traveling to the mountains to pick apples every fall, and each generation is eager to carry on the tradition. So Daphne and her family work to make the annual experience special.

“We’ve got a good base of regular customers,” says Daphne’s husband, David. “But each year, we see a whole lot of new faces come through. … We’ve seen families grow from little kids to parents.”

Customers expect to find Mountain Fresh Orchards in the same spot on the same highway every year, and they expect to find the same people waiting on them. Some come just to talk to Grace Peterson, 83, who still helps out at the stand. But one of their favorite personalities won’t be back this fall. Red’s brother, John, died earlier this year at age 74.

Red isn’t sure how many pictures people took of John, but he figures it’s in the hundreds, if not the thousands. John looked like something out of a 1950s Appalachian postcard. He had leathery skin; wore a wide-brim hat, red suspenders, and a Carhartt jacket; and greeted customers with, “Hello, darlin’.” The Prices know they’ll be answering a lot of questions about his absence this fall. The season won’t be quite the same without him, but they’ll keep going.

Many of the 200 apple growers in Henderson County are multi-generation farmers, but Red is a barber by trade. When his friend Gene Lancaster talked him into starting an orchard almost 30 years ago, Red only knew two things about apples. “Some were red, and some were yellow,” he says. But hanging around a barbershop is the best way to find out about a community.

For 48 years, Red has worked at Crystal Barber Shop in downtown Hendersonville, where everyone is either a grower or a friend of a grower. Red couldn’t help but learn a thing or two about farming during all those years of barbershop conversation.

In 1983, Red and his wife, Joan, began a seven-acre spread on family land. Daphne and David soon joined them, and in 1987, the family had an apple crop ready to take to market.

David and Daphne won’t ever forget the date. They got married that October, and the front porch of their home served as the selling floor for the orchard. That fall, 500 bushels of apples prevented the newlyweds from moving in. Lucky for them, the stand did enough business to move to a permanent location the next season.

“We’re gonna stick around for a bit,” Red says. And that’s good news for future generations of families looking to preserve a
fall tradition.

From tart to sweet, green to red, try these five favorite varieties.

Matt Tate is the content supervisor at the Florence Morning News in South Carolina.