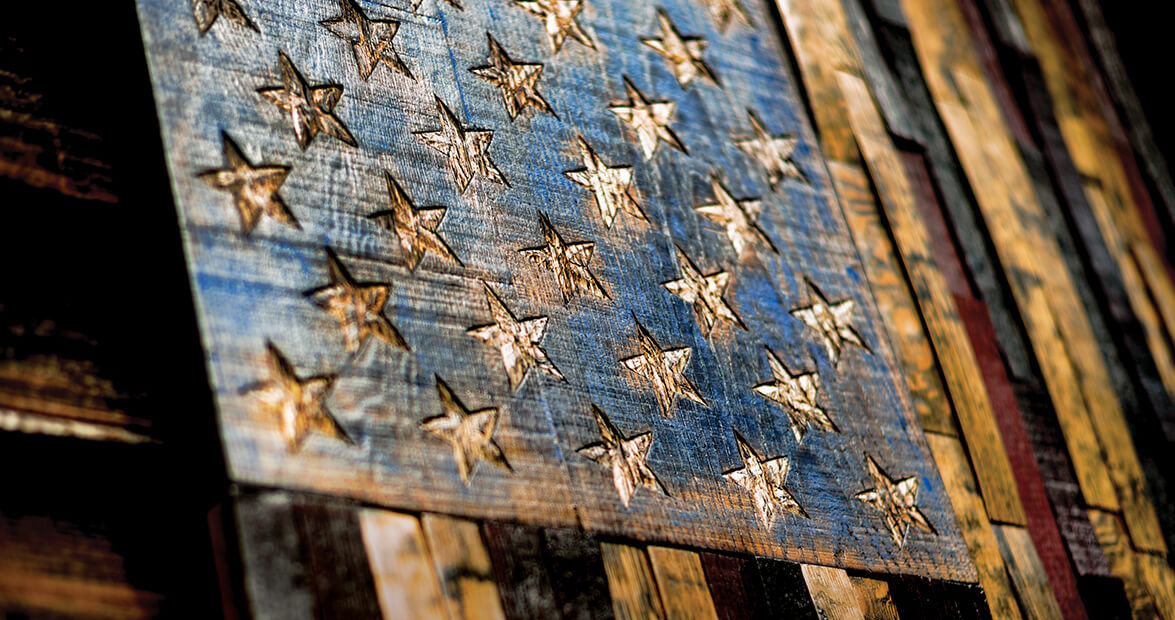 For Heath Trigg, being in the right place at the right time meant being fast asleep near a restless pet. “One night, our dog, Luke, woke me up,” he says. “I was dreaming of an American flag. I drew that picture.” He pulls out a crude drawing of the Stars and Stripes, sketched on his wife’s stiletto-shaped notepad. That sketch became a gift, which became the first Heritage Flag.

Wooden flags weren’t what Heath Trigg made, at least not at first. His father and grandfather had both been in the Navy, but Heath had never served. Instead, after graduating from Appalachian State University, he worked as a builder and woodworker in Southern Pines, creating custom cabinetry for his custom homes. When three Iraq and Afghanistan military veterans wanted to start the Southern Pines Brewing Company, they asked Heath to help design the bar for their taproom. Heath was impressed with the servicemen, and the feeling was mutual. Here’s the budget, the guys told him. Make what you want.

What Heath made was a gorgeous, tall, trellised centerpiece of a bar, and afterward, he wanted to create something special as a gift. That’s when he had the dream.

To turn the sketch into reality, Heath spent weeks shaping the slats of an oak barrel, once used for aging whiskey, into a wooden American flag. On the brewery’s opening night, September 25, 2014, Heath unveiled the flag. The three vets had had no idea. They loved it. 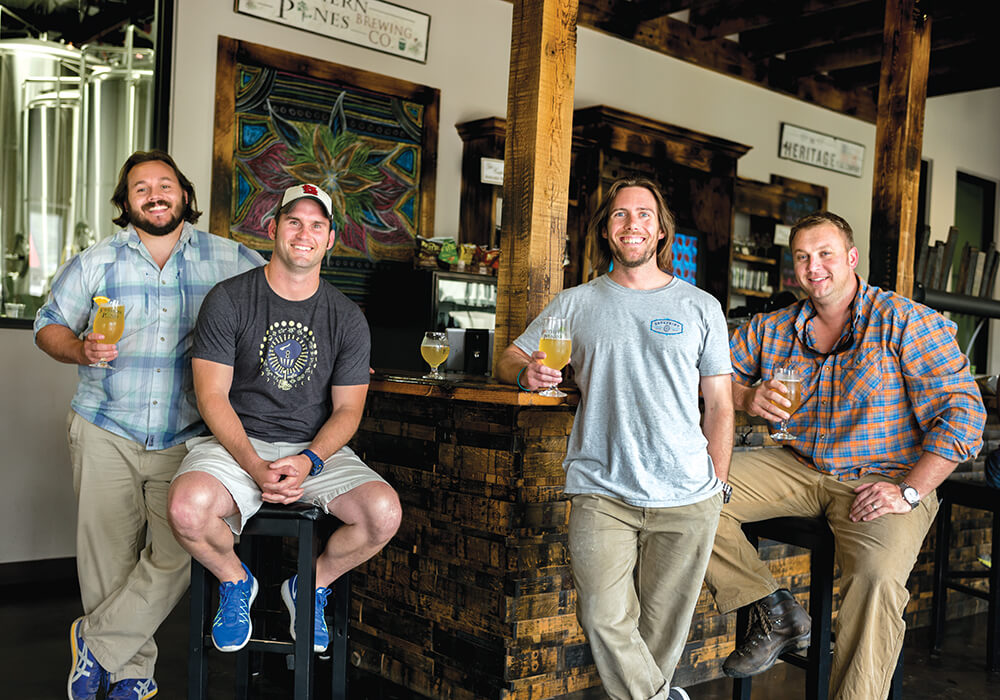 Almost immediately, people who saw the flag wanted their own. When they reached Heath, he responded that surely they could find a similar flag on the Internet. Most called back and told him the same thing: We can’t.

But Heath still viewed the oak barrel flag as a one-off gift, and had no plans to make more and sell them. Instead, he made another one as a present for Bryan Schnell, a Golden Knight and the Army paratrooper who strapped himself to George H.W. Bush so that the former president could make a tandem jump for his 80th birthday. Bryan posted a picture of his flag on Facebook, and a three-star general saw it. Soon after, Heath was on his way to the Pentagon with another flag — again, a gift. An aide to the Secretary of Defense saw it. And so Heath made another one for the Pentagon’s main visitor entrance. During a trip through Arlington National Cemetery, he felt like he finally understood the meaning behind what he’d made. “It makes you think how easy we’ve got it,” he says.

Finally, on November 11, 2014, Veterans Day, Heath flipped the switch on a website and started taking orders for Heritage Flags. He got 87 orders on the first day, and 15,000 emails in the first month. Soon after, he put the cabinetmaking and home building on hold.

Two years ago, at a fund-raising auction, Jeff Schwartz saw a Heritage Flag for the first time. The bids kept rising, and the flag sold for about $12,000. “I fell in love with it,” he says. Jeff couldn’t afford the high price, but he followed the guy who’d made it out the door. 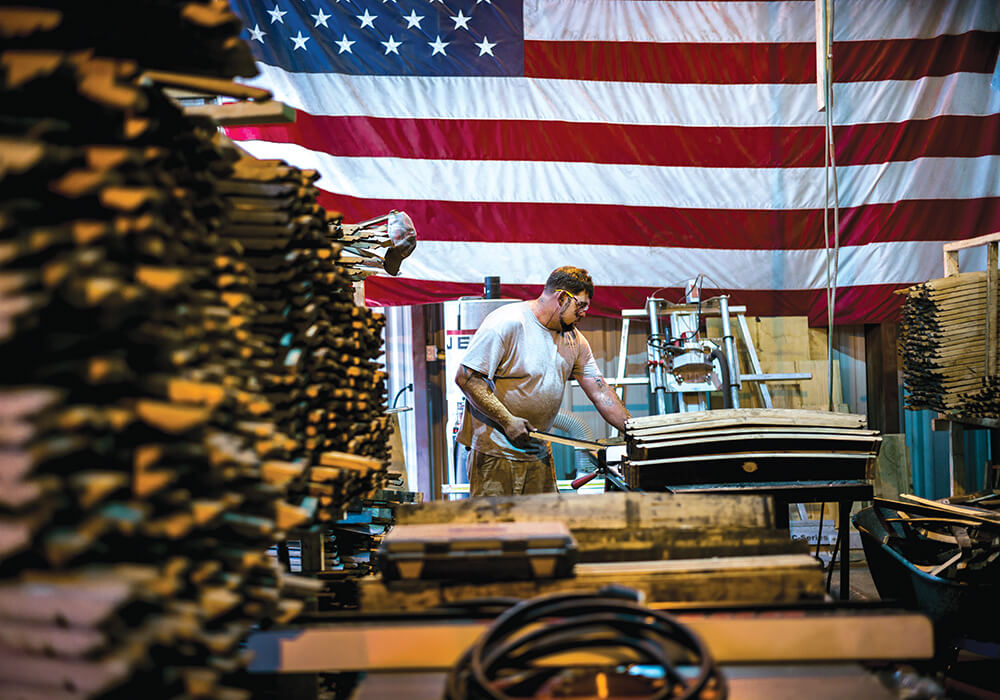 Patriotism all around: Clifton Smith works with aged whiskey and wine barrel staves to create a Heritage Flag. photograph by Charles Harris

In the beginning, this happened a lot. People who saw the few Heritage Flags in existence had a lot of questions. Where did you get this? Where can I get one? Jeff, an Army veteran from Mooresville, has now bought 26 Heritage Flags, and he’s given away 25 of them to his friends, who are also veterans. “The design, the material — it’s unique,” he says. “I’d never seen anything like that in my 46 years.”

Heath’s shop is inside a gray, unmarked outbuilding behind a century-old home on a shady street not far from downtown Southern Pines. Heath removed his business address from his website because too many people were stopping in, and he couldn’t get any work done. He’s hoping to find a new location that’ll allow for both expansion and tours.

Heath and a dozen additional woodworkers go through 300 to 400 barrels a week, ordered from coopers in Kentucky and elsewhere who’ve retrieved them from distillers and winemakers. Men carefully break apart the barrels, flatten them, and leave them outside to dry, sometimes for weeks. Once they’ve reached the right level of dryness, pallets of slats, called staves, are cut to the right width. 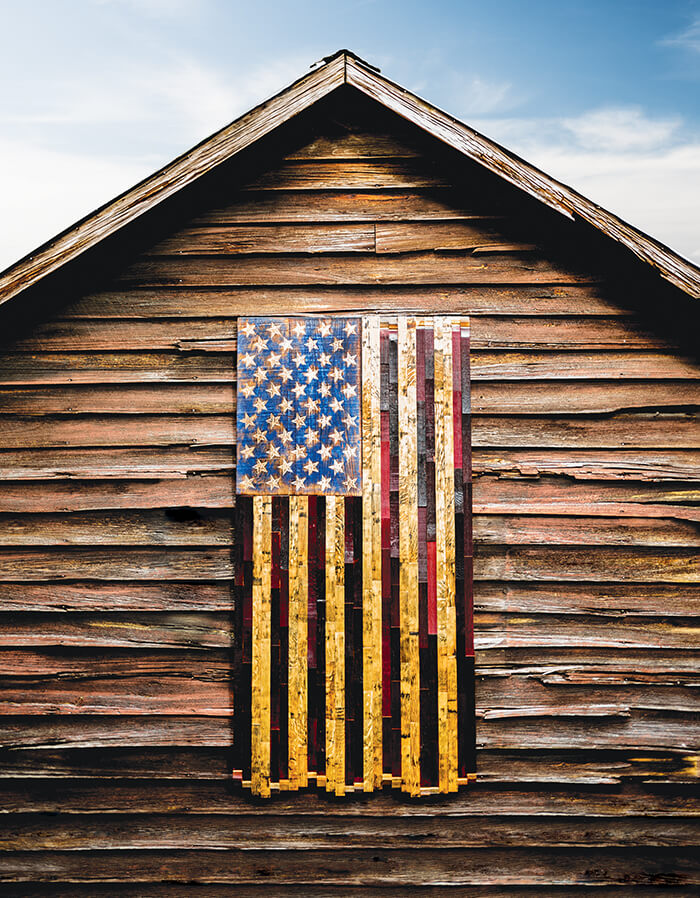 A weathered building represents a rural way of life. A Heritage Flag fits right in. photograph by Charles Harris

At that point, the staves are sanded, then cut to the right length. Next, Ben Chamberlain assembles them like a wooden jigsaw puzzle — methodically measuring, cutting, and inserting each piece. Nothing is painted. The dark pieces are blackened from charred whiskey; the red stripes are the stained interiors of wine casks. The stripe field is attached to the hand-cut star field, and at the end of the eight-day process, two more workers coat the flags with three layers of varnish. All are made of white oak. No two flags are the same. All are built to order, and the orders keep coming in. Heath and his workers can barely keep up.

Why have these flags caught on? The story, for one. The construction, for another. The wood can’t come from just anywhere. It’s already been used in a slow, methodical way, and then it’s reimagined as a wholly new thing. A Heritage Flag is infused with meaning — a cross between a patriotic display and an intricate, naturally imperfect symbol of rural life. Such a flag quietly blends in above the brick fireplace at the Pine Needles clubhouse, or in a shop downtown, or in a home. It’s rustic. Earthy. A piece of Americana art that says something, subtly.

Each flag unlocks a story.

Most important, each flag unlocks a story. Triple amputees have talked to Heath about their service. One veteran who received a flag had stage 4 leukemia. Heath talks at length about a paratrooper who fell 100 feet straight down, and broke almost every bone in her body. After surgeries, therapy, and warnings from doctors that she’d be lucky to survive — let alone walk on her own again — she asked Heath if she could come in and help make the flags. “An inspiration,” Heath calls her. Heath sells plenty of flags — his is a for-profit business, after all — but he still gives plenty of them away, especially to veterans. “He’s not a vet, but he understands it,” Jeff says of Heath. “He feels it.”

They all look at the flag, a rustic touch on a large green wall. Heath finally speaks, with a small smile on his face: “There’s not a cooler one.”