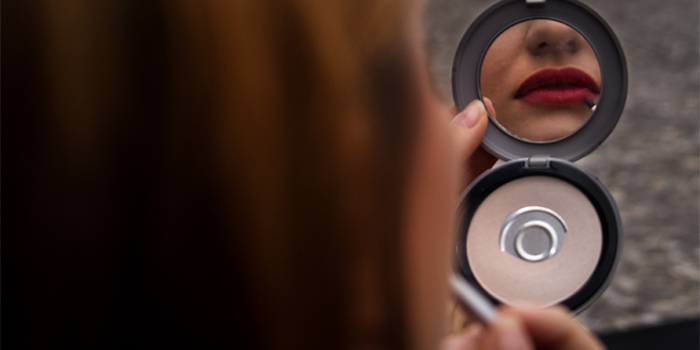 My grandmother kept her cosmetics in the top drawer of the dresser in her bedroom. Coty Airspun face powder in its gold hatbox container. The pink glass jar of Olay night cream. Gold torpedo tubes of lipstick: Revlon’s Fire and Ice. Cherries in the Snow. Love That Red.

When she lay down to take her afternoon nap, I quietly played in that drawer, dabbing my face with the contents from her pots of creamy rouge and pressing an assortment of soft powder puffs into my skin.

This was the 1970s, but my grandmother still had a collection of Life magazines from the ’40s and ’50s. She kept them in a dress box under the bed. Back then, I didn’t understand why she held on to so many things from the past. But I was glad she did.

Those magazines smelled good — musty and smoky and newspapery — and I loved turning their delicate pages and looking at the images of the women in those old photographs who stared back at me. I imagined myself living in that time period, and I pulled clothes out of my grandmother’s closet — her fitted suits from when she worked in the Randolph County tax department in the ’50s; her cocktail dresses for dinners with my grandfather at Pinewood Country Club — and I dressed myself up, trying to mimic Dorian Leigh in her elbow-length satin gloves and Lena Horne in her gauzy scarves and pretty models in cat-eye glasses. My final touch was a swipe of my grandmother’s red lipstick.

Revlon introduced its line of those red lipsticks in the early 1950s, perhaps as a Technicolor antidote to the monochromatic war years. My grandmother found her signature color — Love That Red — and stayed loyal to it for the rest of her life.

At the Duke Homestead State Historic Site a few weeks ago, I saw that lipstick again.

I was there for the annual Pork, Pickles, and Peanuts festival, which concludes with a mock 1940s-style pageant to select the Tobacco Queen. In tobacco’s heyday, a harvest festival was held at the opening of tobacco auction season. Tobacco queen contests were intended to boost tobacco sales, and I guess it worked.

On this day at Duke Homestead, six “contestants” (actually student interns at the site) — sashed as Miss Salisbury, Miss Apex, Miss Bahama, Miss Chapel Hill, Miss Durham, and Miss Raleigh — wore 1940s and ’50s attire and performed a skit in front of an audience of festivalgoers. A girl clogged; another performed a hula dance to “Little Brown Gal.”

And all of them wore red lipstick. Fire and Ice. Cherries in the Snow. Love That Red. I imagined myself falling back to another time.

Then I heard the music again. Before the pageant started, the Malpass Brothers, a family band from Goldsboro, took the stage. I sat under a tent and ate a barbecue sandwich wrapped in white paper. I listened as Christopher and Taylor Malpass sang Ernest Tubb and Tom T. Hall. They played so many old songs — Marty Robbins’s “Devil Woman,” Elvis’s “CC Rider,” and Merle Haggard’s “That’s the Way It Was in ’51,” — but the crowd of people went crazy when the band broke out into a rendition of “Hey, Good Lookin’.”

Hank Williams’s song came out in ’51, but everyone in the audience — this modern audience — knew the lyrics. I watched as the people under the tent stood up and set their paper bags of boiled peanuts in their chairs and started swaying and clapping and singing. There’s soda pop and the dancing’s free, so if you wanna have fun come along with me.

On that day, the past burst through to the present. And for a second, it wasn’t hard to imagine that if I turned around, I’d see my grandmother sitting there, too, right behind me, looking exactly like those girls on the stage, her hair pin-curled and wearing that red lipstick. Love That Red.

It makes me happy to know that, in North Carolina, we have places like this, where the colorless veil of memory lifts, and the past stares back at us, all dressed up and looking every bit as beautiful as we remember.