Few 19-year-olds start their own successful business while still in college, but Zartiques owner Raana Zarea was not your average college student. She’d previously worked for the building’s last tenant: a flea market. When the owner decided to close shop five years ago, Zarea opened Zartiques, her eponymous antique shop. “I really like to sell things that I like,” Zarea says. “I don’t like to sell just anything.” With a warehouse-style layout of between 2,000 to 3,000 pieces in shop on an average day, it seems incredulous that such thought could go into every selection. But it’s true; approximately 70 percent of their inventory is sourced from Zarea’s travels around the country. Items like the Persian rugs and mid-century furniture can serve modern-day practical purposes, however the real hidden gems here are the one-of-a-kind sentimental finds, such as a set of 1950s roller skates, or a 1963 Junior Girl Scouts handbook (is there a badge out there for antiquing?) Though the sheer number of items at Zartiques is impressive, it’s the personal touches—from the knowledgeable staff, to the individual handwritten product tags—that truly make the antique shop distinct.

If by now you’ve worked up an appetite, Porches Café is a newer restaurant located just off the main road, serving food as fresh and simple as the layout of the restaurant itself. The lunch menu, served seven days a week, offers a classic lunchtime trinity of soups, salads, and sandwiches, with a focus on using locally sourced ingredients from area farmers and the restaurant’s own community garden. There are no stoves or fryers in the kitchen, which has pushed chef Erin Wiley to use her international dining background to create an innovative, seasonal dinner menu offered Thursday through Saturday. “[It’s] simple food with fresh ingredients,” Wiley explains. “Really taking the time to respect the product, and make everything homemade.” At lunchtime, the kitchen is inundated with orders for the Cobb and Greek salads, and The Hayne and Cape Fear sandwiches. Another sandwich, The Southern Staple, lives up to its name with smoked ham, pimento cheese, okra pickles, and bacon jam between two perfectly crispy pieces of sourdough. Post-lunch, it becomes abundantly clear why the restaurant is aptly named; after a hearty lunch here, you’ll surely want to sink into one of their Adirondack-style rockers, and relax on Porches’ front porch. 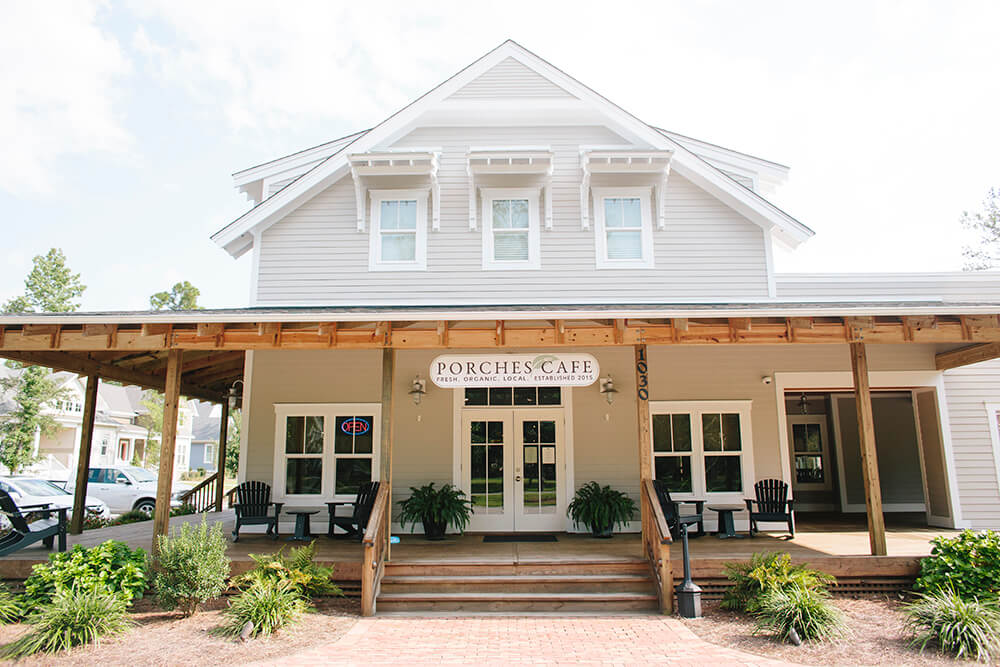 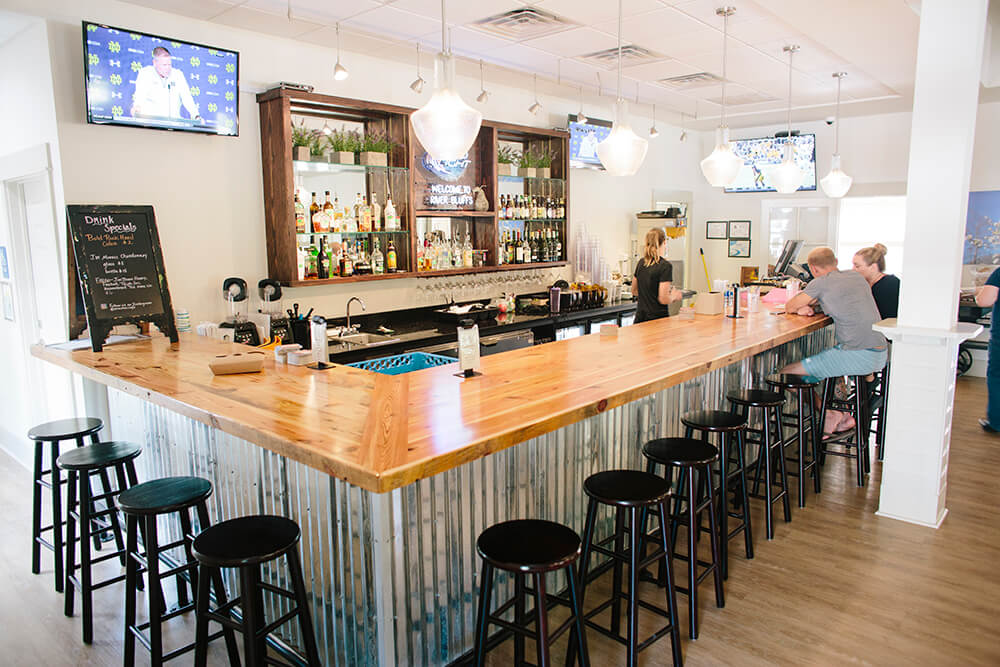 There are a number of picturesque spots to watch the sun set over the Cape Fear River in the region, but none are quite as secluded or serene as Carolina Beach State Park. The 761-acre state park’s Sugarloaf Trail attracts visitors looking to visit Sugarloaf Dune. Less publicized however, are the sandy, riverfront stretches just five minutes down the coastal trail where you can pitch a chair and enjoy year-round, unobstructed views of the sunset. If you see other visitors toting white paper bags, trace them back to the boardwalk for the best trail snack: hot and sticky glazed donuts from Britt’s (though it’s far from hidden, it’s too much of a gem to pass up when in Carolina Beach). In addition to the Sugarloaf Dune and sunset views, Carolina Beach State Park has one more unique claim to fame: their Venus flytraps. The plant can only be found in the wild within a 75-mile radius of Wilmington, so park rangers here guide free carnivorous plant hikes on weekend mornings through October.

When touring the area’s North Carolina Historic Sites, Fort Fisher and USS North Carolina are quick to make the itinerary, but few know of a third, dual site in between the two: The Brunswick Town & Fort Anderson Historic Site. “This was literally the most important colonial port you’ve never heard of,” site manager Jim McKee says. The site is McKee’s personal 10,000-piece Ravensburger puzzle; “a jigsaw puzzle with pieces missing” he says dryly. “We know 100 percent of 20 percent of what’s happened. I gotta joke about that, because otherwise it’s so depressing to know how little we know, but in the same sense makes it interesting.” The history of Brunswick Town, a former major colonial port, ranges from the American Indians period through the American Revolution, when the town was burned by the British and the few residents that were able to flee never returned. Fort Anderson—a Civil War-era fort which McKee believes is one of the best-preserved earthen fortifications from its time in the western hemisphere today—was constructed on top of Brunswick Town in 1862. It failed its purpose, to keep enemy forces from advancing up the Cape Fear River towards mainland, by 1865. The site was forgotten about for almost 100 years, and still today, excavation projects are underway to reveal more of the town’s storied past, which gives every day at this active archeological site the potential to be groundbreaking.

It’s hard to discern which has more character, the interior of Old Books on Front Street, or its owner, Gwenyfar Rohler—though she likes to say that it’s the books and the store that own her. “I started shopping in that store when I was two years old,” Rohler says. “Twelve years ago, he (Mr. Daughtry, the previous owner) called my Dad and said, ‘I want your daughter to buy my bookstore.’” During her tenure as owner, the store has undergone several major changes, such as moving locations and beginning to carry new books, in addition to used, out-of-print, and rare books. Bibliophiles will also appreciate the “literary libations” bar serving beer, wine, and other beverages for browsers to enjoy, and a literary jukebox, which plays audio books, excerpts of plays, and poems instead of music. Rohler admits first impressions can be overwhelming; there are more than 100,000 books, totaling two miles worth of books in-store. Therefore, if you need help finding a starting place, Rohler is always ready, actually waiting, for customers to strike up a conversation. “The best question to ask is, ‘what was the last book you’ve read that you enjoyed?” she says. “Not necessarily the last book you’ve read, but the last book that you’ve enjoyed, gets a different answer. Also, then it goes to get people talking, and you get into a conversation. That’s the real joy of working here.” 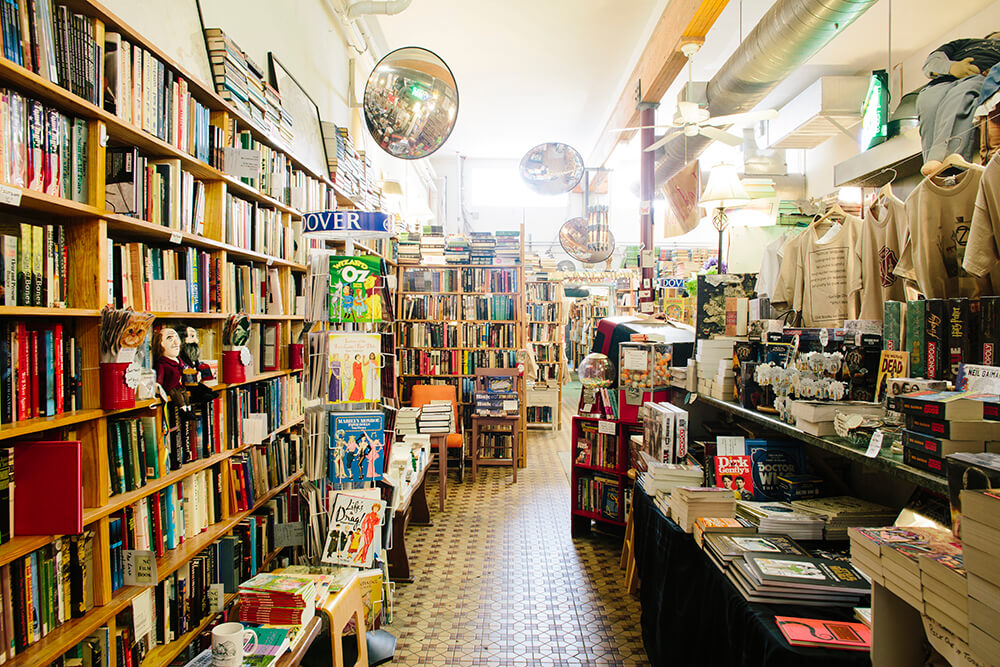 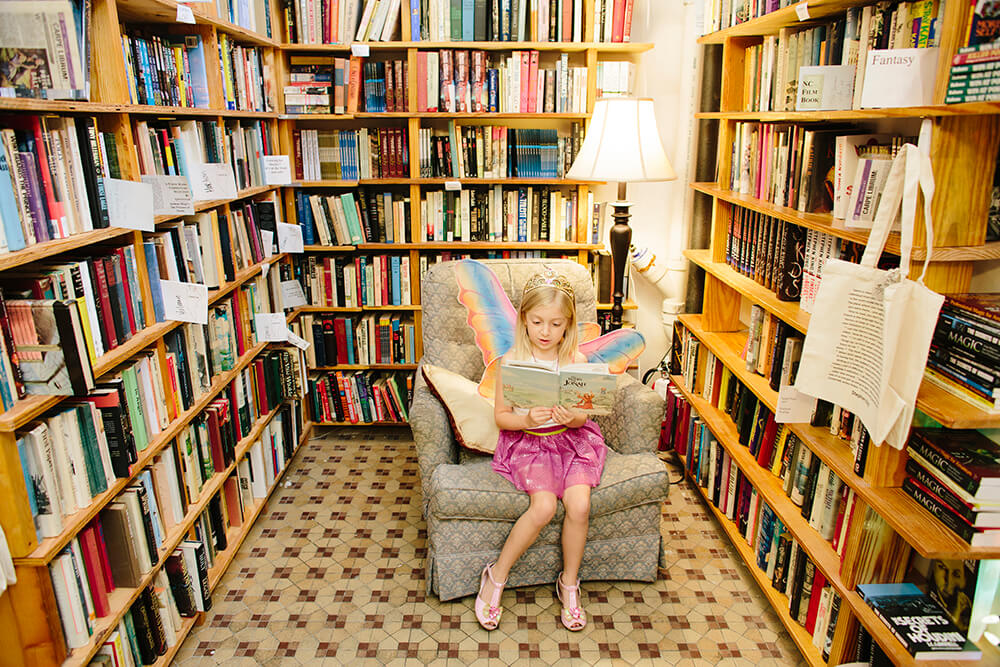 For a face-to-face experience with history, explore Pine Forest Cemetery, a historic African-American cemetery for Wilmington’s slaves and free black residents that predates the Civil War. Since officially opening in 1871, the cemetery has interred a number of notable North Carolinians, including: Dr. James Francis Shober, North Carolina’s first licensed black physician; Dr. James B. Dudley, the second president of N.C. A&T State University; and Dr. Robert Robinson Taylor, the first accredited African-American architect in the U.S. and first to graduate from M.I.T., as well as a close confidant to Booker T. Washington. The grounds are incredibly scenic; from the Spanish moss draping down from the live oaks to the rolling green hills, everything beckons you to stay awhile, so take a seat on a bench and listen. When the wind blows, the trees whisper to each other the secrets and stories of the prominent African-Americans that helped build Wilmington centuries ago.

As evening approaches, escape the city center in time for the sunset at Marina Village at River Lights, home to both residential properties and a commercial village open to the public. The property, less than a year old, is the newest North Carolina venture for Newland Real Estate Group, and is scenically set alongside the Cape Fear River. Its signature restaurant, Smoke on the Water, is the second restaurant for chef James Smith, owner of downtown Wilmington’s successful Fork ‘N’ Cork restaurant. “Greater Wilmington has a limited selection of waterfront restaurants,” Newland Community’s marketing director Kace Coble says, and unlike downtown Wilmington or Wrightsville Beach, parking here is plentiful and free. River Light’s 3,000 feet of prime riverfront property means visitors can feel the river breeze at a number of different vantage points, from the property’s hammocks, to their boardwalk gazebo, to the fire pits on the outdoor deck of the restaurant. Even the indoor portion of the restaurant can be open-air with the pull of two garage doors, inviting in the warm sunlight and releasing the sound of clinking glasses and laughter through the grounds. 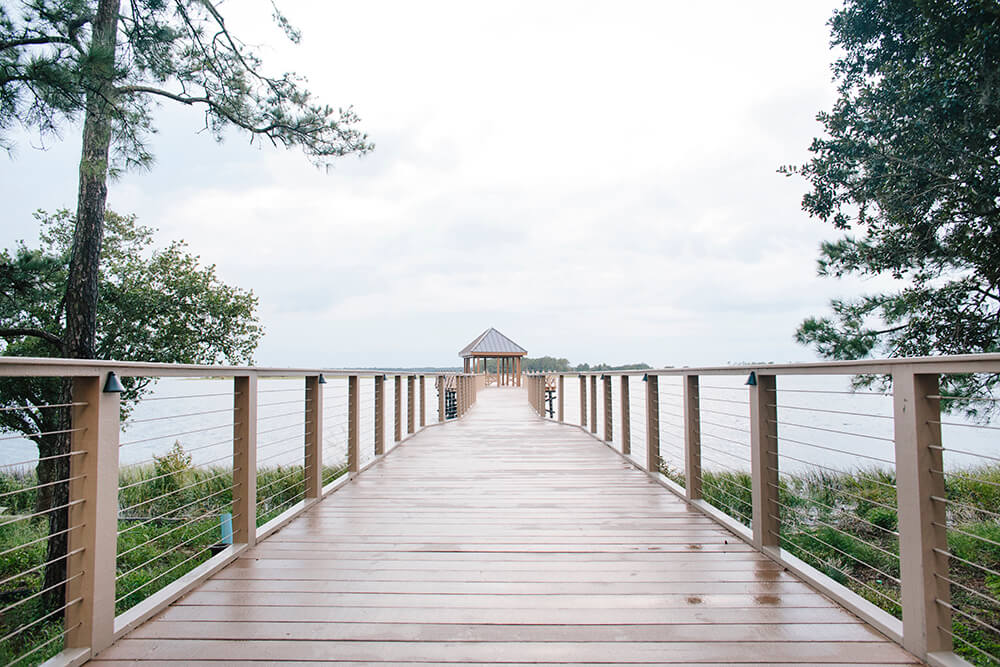 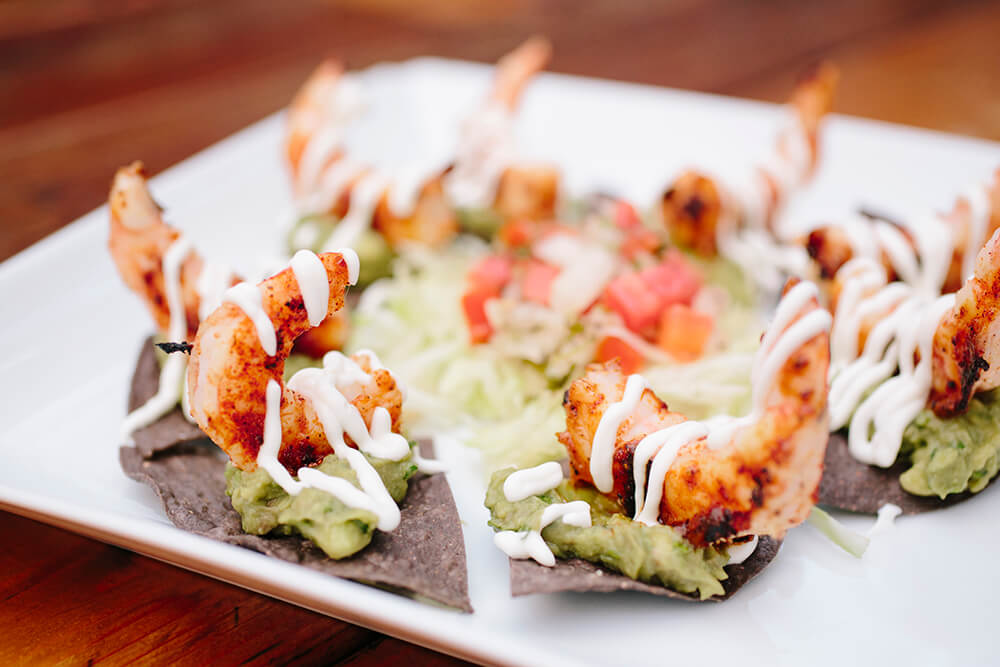 There are no maps or signs to lead the inquisitive, but if you park in the Fort Fischer lot, cross the street, and head north on the beach at low tide, there it is: Kure Beach’s coquina rock outcrop. A coquina is a type of rock composed of crushed shell, sand, and fragmented fossils. This attraction is quite literally a hidden gem, visible only when low tide pulls the back the blanket of water, leaving a walkable platform begging to be explored. Children enjoy scampering among the tidal pools and mossy rocks, sticking their fingers into swirling waters with held breaths and chests beating in anticipation, hoping to find a beautiful shell and not a pinch from a hermit crab. The coquina rock outcrop is an exclusively Kure Beach experience, as it’s the only naturally occurring rocky formation on the entirety of North Carolina’s coast. It is strange, striking, and unmovable; in the moment you wonder, How could anyone miss this? But stay long enough, and you’ll start to see the rocks disappear beneath the high tide waves, where they’ve rested quietly below the surface of an evolving world for more than 12,000 years. 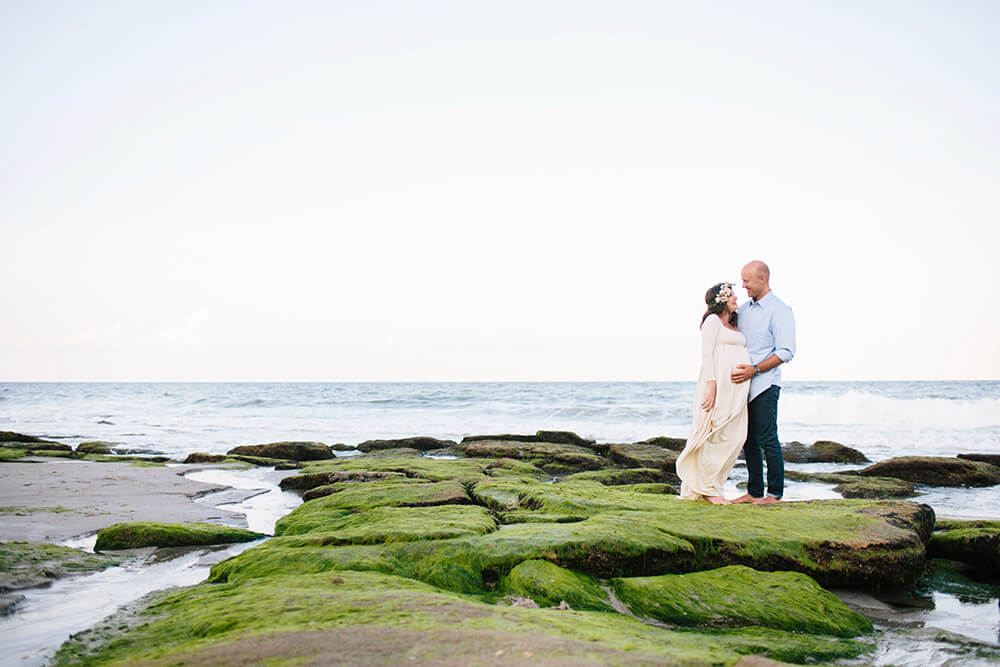 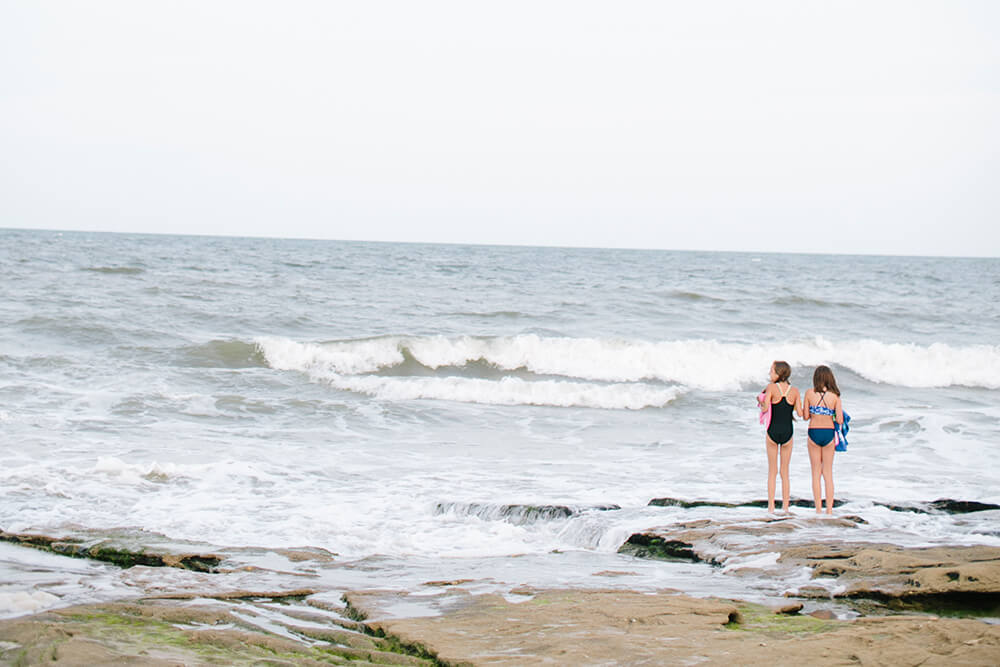 Mocha cappuccino soft serve. Don’t ask her to spell it, but as she stands barely an inch over the counter level and not a day over six, she makes her decision with the wisdom only a veteran kindergarten ice cream eater could have. Traditionally, soft serve’s flavors include chocolate, vanilla, maybe strawberry and Spike’s Dairy Bar has those flavors, but also so much more. By using 10 percent butter fat instead of lower amounts like large chains, any flavor choice listed on the whiteboard outside—like tropical orange, pistachio, and of course, mocha cappuccino—will produce a thick, creamy, melt-in-your-mouth bite. The shop is outdoor-counter-service only, which makes it an easy place to pause and grab a snack on a walk through downtown Southport. Spike’s is closed during the winter season, but a quick trip down the road to Bullfrog Corner will also provide a sweet experience for members of the family of all ages. Unwrap old-time favorites, such as Clark bars, Coconut Long Boys and Spree at the old-fashioned candy and gift shop. Or, grab a brown paper bag and stuff it with brightly colored homemade taffy—there’s a guide to the 28 flavors, but what’s the fun in that?

As a child, sharing candy was a great way to make friends; for adults, Uncorked by the Sea replaces candy with wine. Current owners, Jim and Gina Poppe and Randy and Rhonda Till, met during the shop’s Thursday night wine tasting in 2012. When the former owners decided to move onto different opportunities, rather than see Southport lose a popular social hub and destination for wine, the two couples decided to undertake the business together. The Poppes and Tills instituted a number of changes after taking over, such as adding craft beer and budget-friendly choices to balance out the fine wines in the shop. “We carry $11 wines now, and they would’ve never considered that,” co-owner Jim Poppe says. “For someone else, a $12 bottle of wine is just as good as a $50 to others.” One thing they didn’t touch though, was the Thursday night wine tastings beloved by the community; even in the summer months, approximately 70 percent of attendees are locals. The shop donates the five-dollar wine tasting fee to different charitable organizations every week. Weekend callers are likely to find wines listed on Thursday’s tasting still being poured on Friday and Saturday, and impromptu visitors will quickly discover that a complimentary taste and conversation are always on the table.